Get Your Guardian Angel On In ‘Harold’

It’s a common ideal throughout cultures worldwide: unbeknownst to you, there is some kind of being quietly ensuring your safety. A guardian angel that ensures that that madman in traffic doesn’t change lanes into you, that a falling potted plant is caught in a small breeze that pushes it away, or nudges your hand so you grab the less gut-destroying prepackaged gas station sushi tray. Harold takes this concept and runs with it (pun intended) by allowing you to take on the role in a high-stress framework.

The story is as simple as the gameplay. You play as the star pupil of a guardian angel academy. The biggest test of the year is a race—but not in the way you might think. As guardian angels, you are assigned to a group of mortals that engage in a race filled with perils. Where once you were guaranteed to be at the top of your class, you find yourself attached to Harold—the gawky, bespectacled, admittedly pitiful excuse for a human being. As a result, you’ll have to use every skill you’ve got to get Harold to the finish line. If you can finish the race third overall, you’ll pass—but the top spot is of course preferred. 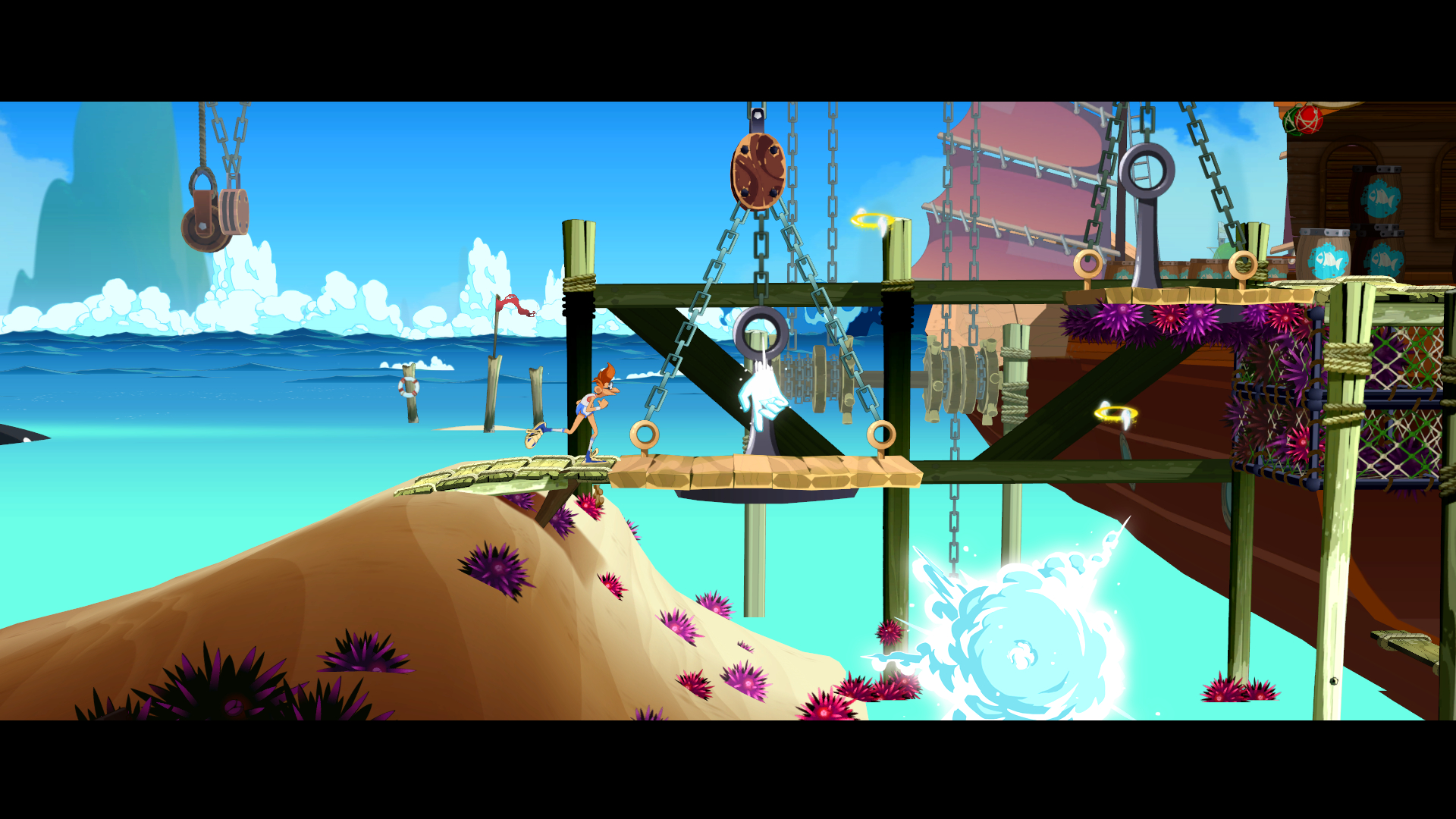 To do this, you exert your influence over the race in a variety of ways, not only encouraging Harold to run faster, but also to remove obstacles in his path that he cannot surmount on his own, protect him from potentially lethal hazards, and—most difficult of all—interfere with the other racers to guarantee Harold comes out on top.

This requires a fine degree of control, which imposes what I feel is the largest gripe I have with the game: it’s a PC release that requires a gamepad or controller of some kind. Having a controller is often ubiquitous these days—anyone that has a wired Xbox 360 controller isn’t subject to this limitation, really any USB-based controller with analog sticks will do. Still, while availability of the peripheral isn’t really an issue,the cost is—any PC player that has shunned console gaming and hasn’t gotten around to snagging a controller should expect to add an extra thirty bucks to their price tag to get involved.

What you get for your money, though, is a fairly clever platformer married to those mobile runner games that have pervaded app stores everywhere. Harold will always run forward throughout a race, albeit not terribly quickly. By pressing your bumpers simultaneously, you’ll give Harold a burst of “encouragement” (also known as a lightning bolt to the ass) which translates to a temporary burst of speed. This power is limited, however, and you’ll have to collect halos to refill it during a race. One of the general requirements to coming in first during a race is that Harold must be running at full-tilt for the entirety of the race. 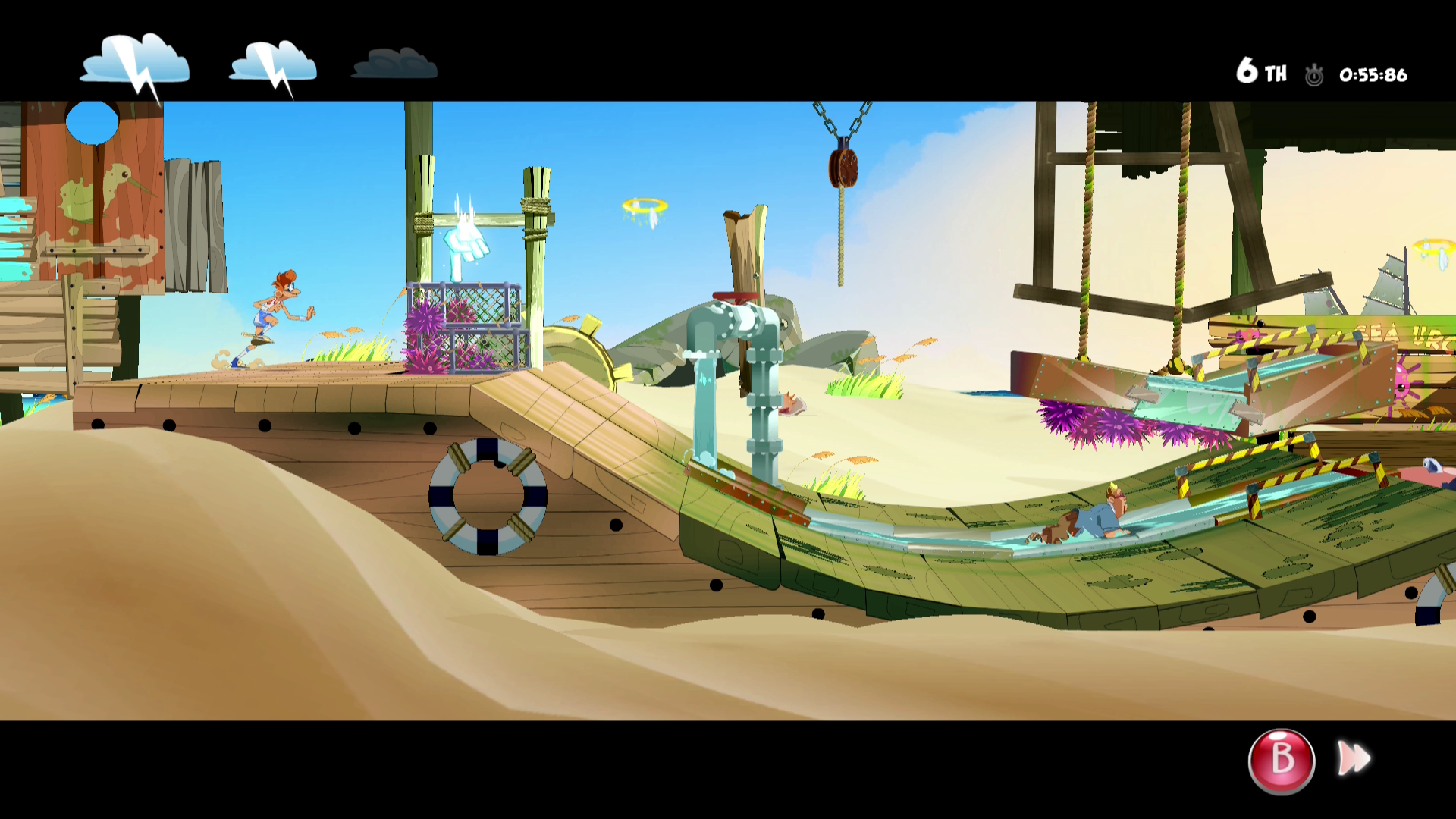 Along the way,  you’ll have to make sure that Harold’s path remains clear. A quick press of a button will make Harold hop into the air to make it over short pits. Other, more insidious obstacles will demand your involvement in a more divine manner. Larger pits will often have sliding platforms that you’ll manipulate by moving the left stick left and right. Tall walls might have a pulley system to move platforms up and down. Small walls in your path require you to flick the left stick to the right like a battering ram several times so Harold can pass (he can’t climb over them). Some bridges need you to rotate the stick in order to raise or lower the path to either avoid a spiky death beneath or determine the path that Harold will follow. Rope bridges can be pulled tight and flicked to push Harold along for a brief burst. Noose traps can be charged to fling Harold far ahead. Each race has a themed environment which might also have unique obstacles: desert stages have mirages to be cleared by fanning them away, for instance.

After the first stage, you also learn that a necessary component of winning a race is not only to keep Harold moving, but to impede the progress of his much more physically fit rivals—all of whom can navigate the courses with ease. Left to their own devices, they can safely reach the finish line. To mitigate their physical advantages, you’ll use each of the obstacles against them. Shifting platforms away while opponents are in midair, slamming drawbridges down to knock them off, flicking bridges against them to push them back, deliberately snaring them in noose traps, and cutting vines to drop them to their doom.

Alone, these aren’t particularly clever mechanics. Together, however, and coupled with some clever level design, Harold manages to produce a surprisingly compelling experience. Each stage requires the successful completion of a set of practice stages before you can participate. These are carbon copies of the real race, done section-by-section so you can work on timing, plan paths, and tune your performance. The real races are the star, though: the runner mechanic ensures that momentum is maintained throughout, and the variety of ways you manipulate the environment keep you on your toes, sometimes in more ways than one. You’ll shift a platform down for Harold, swap to a bridge to slam down to drop an opponent,, switch back to raise the platform so Harold doesn’t hit a spiked wall, then destroy a wall in the path. 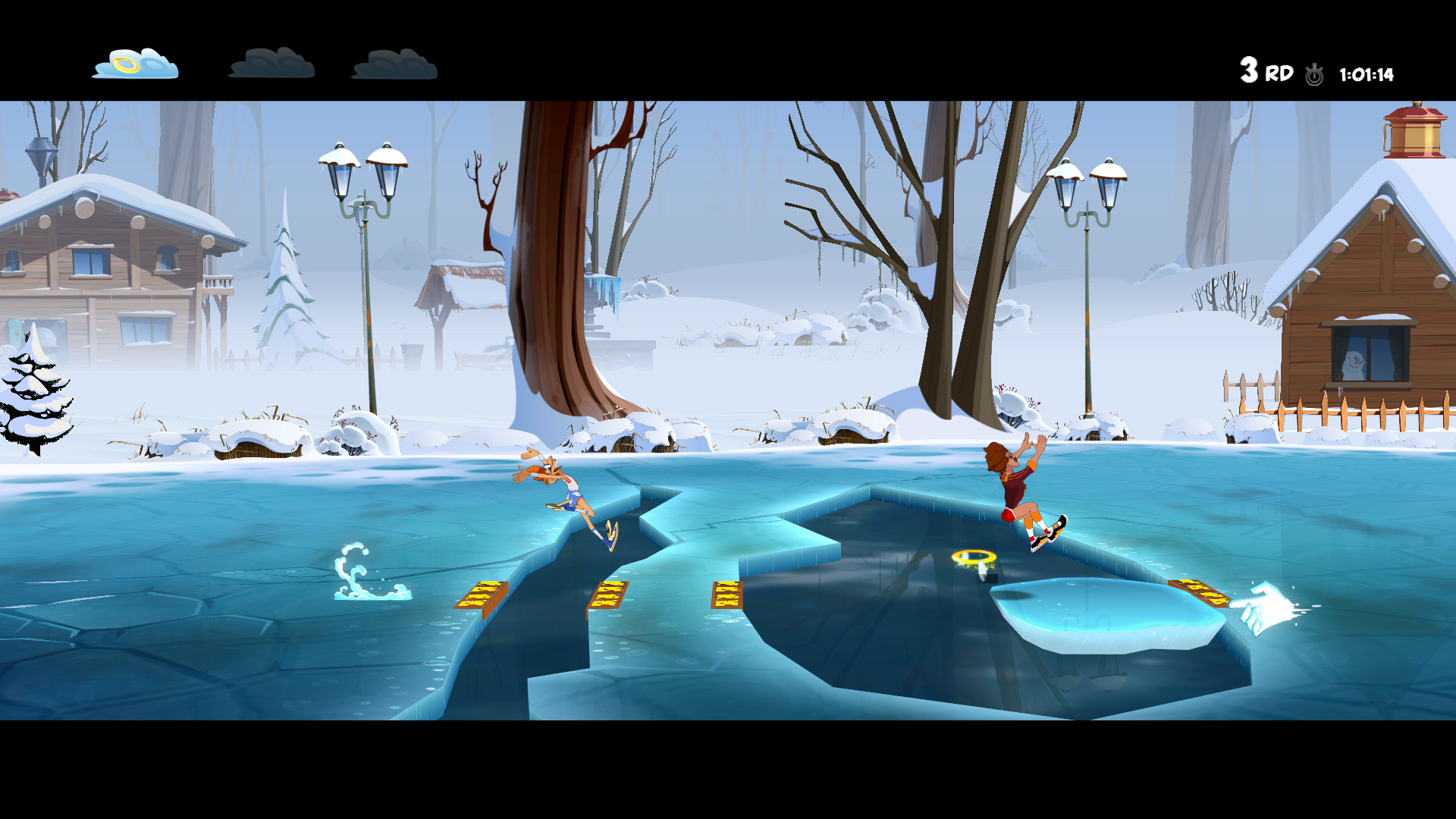 It all happens at a pace perfect to challenge your mental faculties without moving at a Sonic The Hedgehog-like speed. The game is less about sheer velocity and more about execution of action. Rather than make it to the end with some pinpoint jumps, it’s more of a multitasker’s game. Monitor your runner, wreck the others, and do it smoothly. The game knows what it is, as well, with design sensibilities that make it quick and easy to restart stages for perfectionists, and isn’t too punishing to the casual player.

The game’s art style isn’t terribly evocative, but is colorful and lighthearted. The animations are particularly smooth—to be honest, the game looks like a glorified mobile title, though given the game’s theme and slant, this isn’t at all a disappointment. The difficulty amps up well enough, but gung-ho gamers aren’t likely to find much in the way of challenge here—sufficient restarts in a stage will eventually lead to perfection. In brief: Harold isn’t exactly a platformer that you’ll come back to time and time again, even if it is an engaging one to start on. 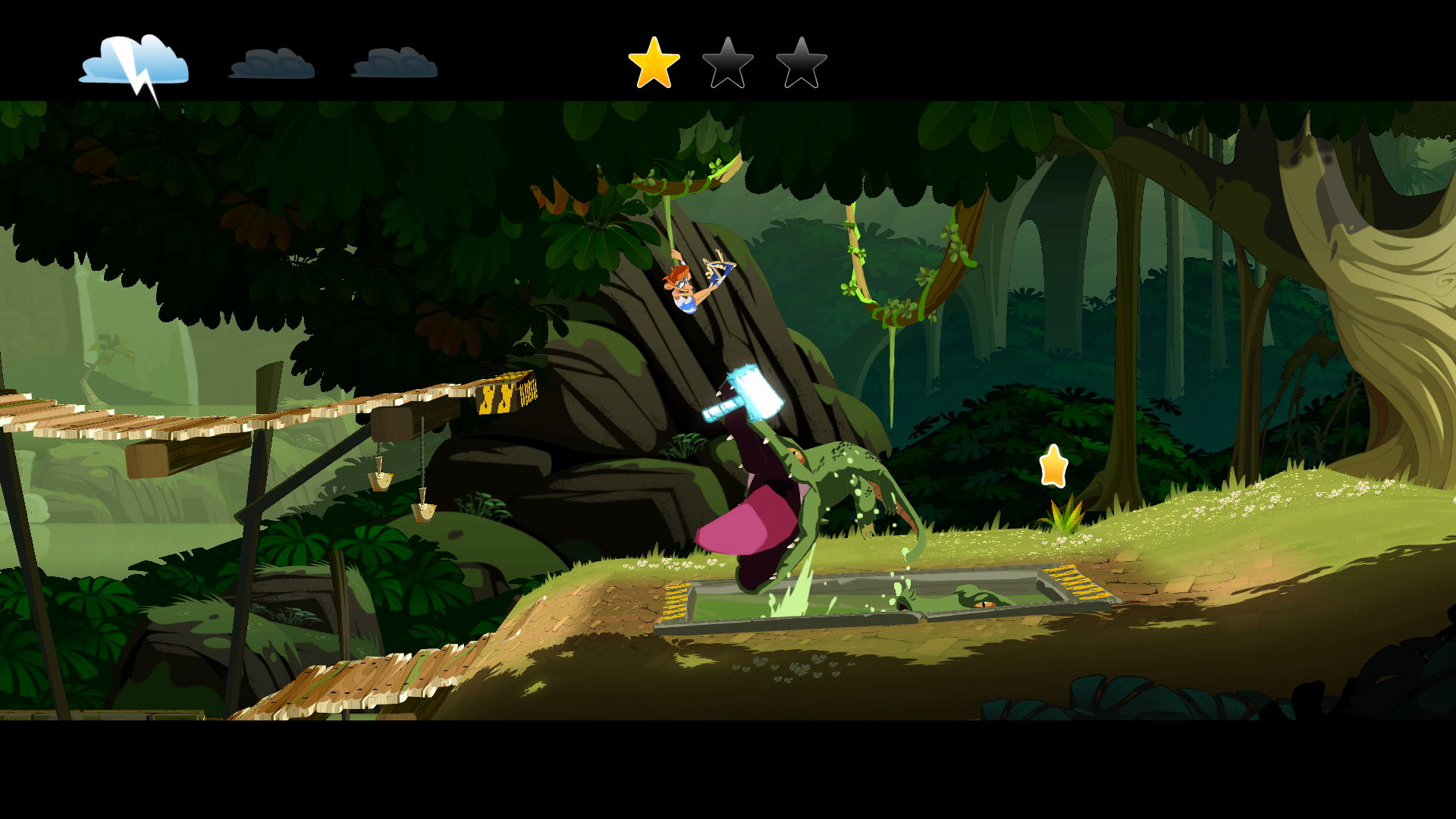 On the downside, the controls aren’t quite as responsive as you’d like in certain situations (drawbridges and other traps that require rotation are the worst offenders here), and it’s too easy to accidentally, say, switch obstacles instead of trigger a speed boost. Those unfamiliar with these sorts of platformers (particularly ones that aren’t procedurally generated) might find the frequent deaths and restarts frustrating.

For $19.99, it’s not a bad deal. You get a game that’s a definite cut above mobile shovelware and has sufficient merit to call itself a game in it’s own right. That being said, if you don’t happen to have a controller to play the game with already, the cost of entry is a mite steep for the amount of gameplay you get from the deal. Harold is a great concept that suffers in just enough ways that justifying its purchase is more difficult than I’d like it to be. It’s a good idea, and my hope is that developer Moon Spider can produce work of this quality that has a bit more scope moving forward. Check the trailer below if your interest is piqued.