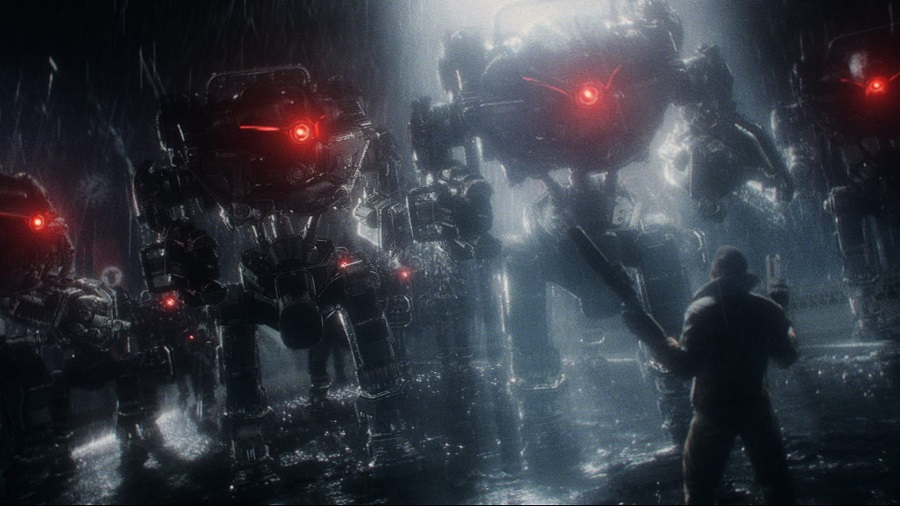 Your favorite Nazi slaying, un-dead bashing, history changing, shooting fest is back. Wolfenstein: The New Order is the latest installment in a long running tradition of Reich toppling, and although it may seem like the same old re-hashed experience from the outside, this title manages to put a new and interesting twist on the Wolfenstein brand.

The origins of the franchise had us wading through Nazi strongholds and eliminating key operatives on a quest to turn the tide of WWII. We’ve faced heavy German weaponry, un-dead monstrosities, and supersoldiers on our quest for world peace, but the monumental task set forth in this new release makes the rest of the Wolfenstein series seem like child’s play. Wolfenstein: The New Order re-invents world history, showcasing what things would be like had the Nazi’s won WWII.

Players step back into the shoes of famous Wolfenstein protagonist, William “B.J.” Blazkowicz. This time, however, the storyline revolving around Wolfenstein: The New Order completely changes the former life of the battle-hardened hero. Those of you familiar with the Wolfenstein storyline may recall that the original series sees Blazkowicz marrying after the end of WWII and living on to have a child and grandchild. Wolfenstein: The New Order puts a slice in that timeline, and instead has Blazkowicz suffering a serious head injury. The trauma leaves him in a vegetative state, forcing him to spend his next 14 years at an asylum.

His brain finally clicks, and he regains his motor skills when he comes under attack by a ruthless Nazi sweeper squad. Blazkowicz escapes the asylum with the institution’s head nurse, Anya Oliwa, and sets out on a journey to reclaim the world from an incredibly powerful Nazi regime. Along the way he meets many members of a resistance cell, and gets a first-hand look at how dismal the world has become under Nazi control.

This storyline is a very refreshing and creative boost to the simplistic Wolfenstein formula. Top Nazi scientists and researchers have managed to develop a plethora of advanced weaponry and technologies. They continue to grow stronger and gain resources as their Reich stretches unopposed across the globe. It’s a terrifying glimpse at an oppressive alternate future, and although it’s just a game, developers did a great job in expressing the severity of a world controlled by an evil regime. 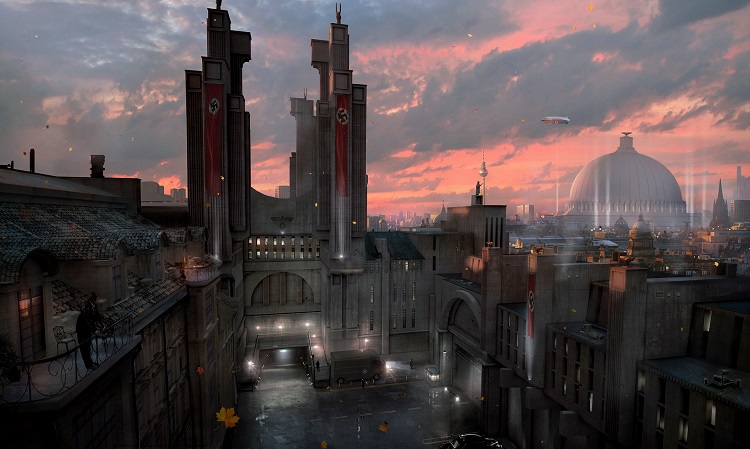 The scale at which events take place is well done. You’re well aware that you’re hopping from points all across the globe, but you still feel locked into a linear storyline. This allowed creators to craft a title that is rich in environmental art. This isn’t your traditional shooter where the same buildings, structures, and items are reused in a copy and paste style of level design. Each area has its own unique feeling and art style, and no two levels appear the same.

Unfortunately, we live in a modern gaming age that is plagued by lackluster shooters and cookie-cutter graphical elements. From each released Call of Duty, and the variety of military style FPS that follow, we’re presented with monochromatic color schemes and low-resolution textures. Wolfenstein: The New Order, is a stellar exception to this rule. A lot of artistic vision and work went into the creation of each aspect of this release and it really shines as the game progresses. 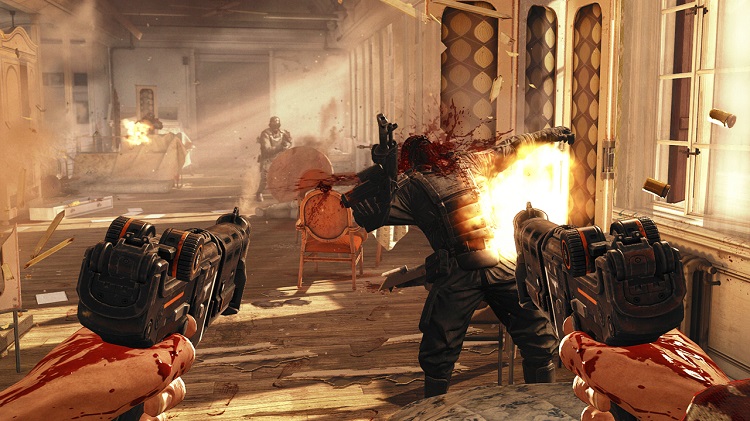 From the first few steps you take, to the final confrontation, you’re surrounded by engrossing and entertaining environmental design. I’m not saying that this is the best looking game on the market, or that it’s going to win any visual awards, but I really respect that developers took so much time to add intricate detail and ambiance to a genre that is generally focused on gameplay rather than visual appeal. It really envelopes you in the gritty and depressing feeling of a dictatorship with malicious intent, and that helps to further the immersion as you progress through this single-player affair. 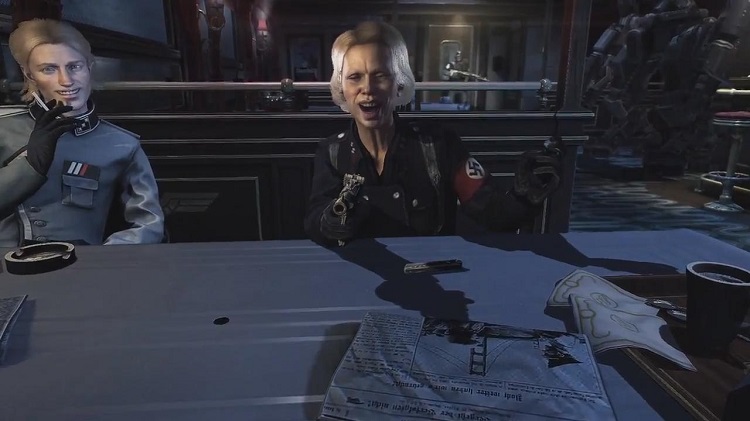 Another impressive graphical aspect are the character models and animations. Each individual has their own unique personality and look, and the level of detail put into crafting different faces and structures for the main cast of characters is impressive. The detail is most apparent in each of the title’s many cutscenes, where developers added high-def animated videos in place of traditional in-game footage.

The classic aim-and-shoot style of gameplay is what made the original Wolfenstein such a vast success, and this formula has remained fairly unchanged across the franchise. Living by the adage of “if it ain’t broke, don’t fix it,” studio after studio has stuck to the roots of pitting the player against seemingly endless waves of enemies and allowing you to mow down the opposition with a vast array of gun types and explosives. For the most part, Wolfenstein: The New Order follows this old school method, but developers still managed to sneak in a bit of modern flair.

Movement is an important element for this release, and although its predecessors would have you running and gunning your way through Hitler’s many minions, Wolfenstein: The New Order employs a more tactical approach. You’re given the chance to experience the game as you wish, and creators have implemented a variety of tools that allow you to sneak, run, slide, vault, and lean your way through the trenches. Performing certain tasks will unlock new “skills and perks” from a variety of trees that range from explosives and firearms, to tactics and stealth.

The guns in Wolfenstein: The New Order bestow their own interesting twists. Each firearm has specific unlockable attachments, and most include a separate firing mode. In true Wolfenstein fashion, these weapons are unique, intricate, and a little far-fetched at times, although they’re allowed to be due to the alternative and futuristic storyline. 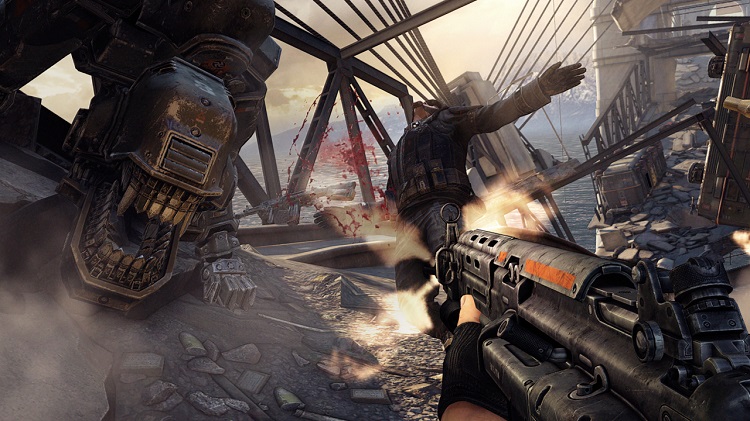 Aside from that, gameplay remains fairly unchanged for the Wolfenstein brand, and is quite comparable to other games within the series. I find that to be a good thing though, and I’m glad to see that developers kept to the roots of what made the series so engaging while adding a few bits of their own personal style to the mix.

This is easily one of the better single-player releases we’ve seen so far this year, and a great addition to the Wolfenstein franchise. Fans of the beloved series should feel right at home, and the interesting storyline and crisp visuals will appeal to anyone out there who is new to the series. Those looking for some value will find a slew of unlockables, mini-games, achievements, secrets, and two separate timelines to playthrough. It may not be shooter of the year, and without any multiplayer elements it’s probably not a contender for many awards, but Wolfenstein: The New Order is a very polished, exciting, and entertaining FPS.