Wolf Among Us: Episode 2 – Smoke and Mirrors

***WARNING – CONTAINS SPOILERS FROM EPISODE ONE***

The end of TellTale’s first episode of Wolf Among Us certainly left me and other players with quite a shock, and a plethora of questions. The murder of an established main character and romantic interest this early in a story is a ballsy move and was an unexpected twist. Needless to say, I was eager to get my hands on my controller as soon as Smoke and Mirrors went live after what felt like an agonizing wait of 3.5 months (first world gamer problems). Who knew an episodic, point-and-click adventure game could be so compelling?!

With a short play-through time of approximately 1.5 hours, Smoke and Mirrors gets right to the point straight from opening credits. Bigby is obviously still reeling from Snow’s brutal death and wants answers. Bigby has the opportunity to open the game interrogating whichever suspect you caught at the end of Faith with humanity intact or unleashing his big, bad wolf. It becomes our choice as the players to commit him to either maintaining his humanity, or to completely submit to his dark side. 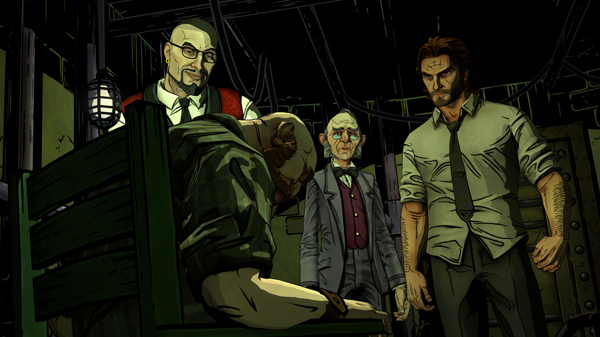 These choices leave little room for grey areas, and meaning is certainly lost in the overall feel of the game; every choice shapes relationships and the plot focus. The fantastic aspect of these choices is that they aren’t as black and white as other games such as Infamous shape them to be (i.e. burn this box of adorable puppies, or save this baby from being eaten by a pack of wolves), but they do cause you to feel like they make sense for your specific character choices. It also opens up the probability for replay value and at least a few different story outcomes; I know that I will personally be playing through several times making different selections.

Choices in Smoke and Mirrors definitely felt less critical than those in Faith and gave me the slight feeling of dissatisfaction by the end of the episode. To be fair, Faith was a tough act to follow. Most clues felt a tad transparent and easier to connect, but it’s still not blindly button pushing to get to the next resolution; the player still has to make informed decisions by paying attention to the details, however small they may seem. The story is genuinely compelling and often has me questioning my instant assumptions. I find myself over-thinking some decisions and placing myself into a detective’s state of mind. All of the clues are there, but we as the players must make the connections or ignore them entirely. It also helps if you’ve brushed up on your knowledge of fables (hint, hint).

A foreboding “Will you be next?” billboard on a passing bus sets the tone of distinct unease as to what may happen next and no character feels safe despite the surprise opening of Smoke and Mirrors.  I continue to have high expectations and hopes for TellTale Games and am positively frothing at the mouth for the next episode of Wolf Among Us and The Walking Dead. So, what are you waiting for? Turn off the lights, put on that headset, have some scotch, and create your tale.

Wolf Among Us is available on Xbox 360, PS3, PC, and OX S — Check out TellTale’s FAQ for details!