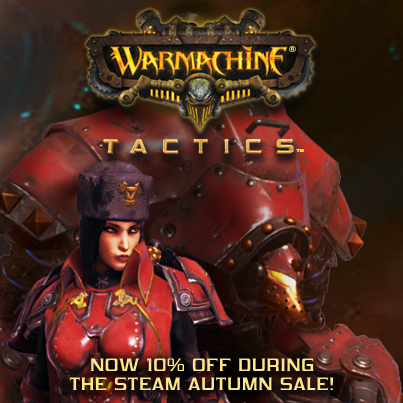 ‘WARMACHINE: Tactics’ Brings The Tabletop To Your Desktop (Or Laptop)

I know some miniature game players. Not tiny people that play games, but people of various sizes that play games based on miniature figures on a tabletop. These are names many gamers will recognize, but might not have had the chance to delve into: Warhammer 40,000 being one of the most popular. It’s often said, however, that in Warhammer it’s more about the figures in your army than how you use it, while its contemporary, WARMACHINE, values your strategy more than the figures that make up that army. The boys over at WhiteMoon Dreams share that sentiment, and have done their best to make what is considered to be one of the gaming forms with the highest barrier of entry to the masses with WARMACHINE: Tactics.

I have the somewhat difficult task of reviewing this solely as a PC game, and have less insight into how effective the game is at translating the tabletop experience into a digital format. We may be able to expound on this later, but when considering this as a game in and of itself, there’s plenty to love, but you’ll have to look past a few things. 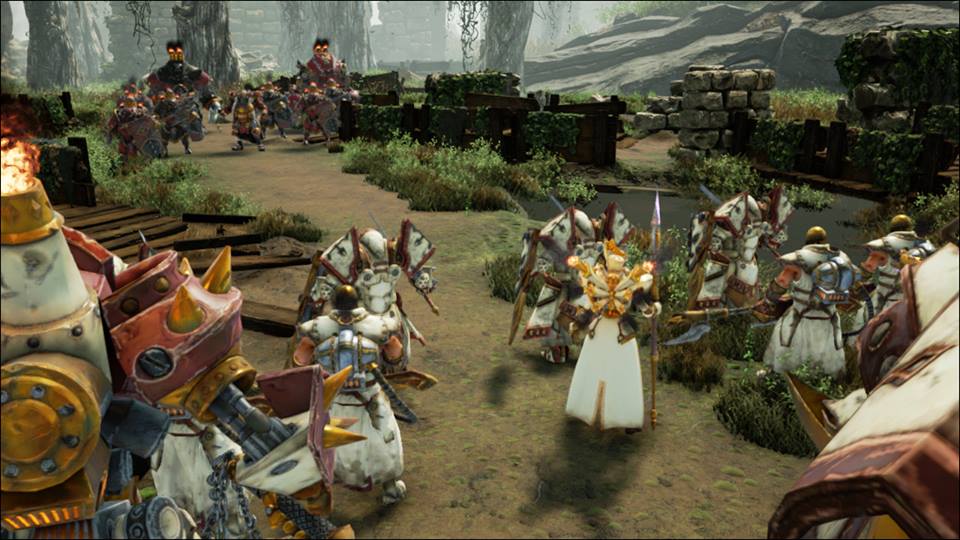 There will be inevitable comparisons drawn in WARMACHINE: Tactics to other strategy games that have been released of late, but many of the game’s systems serve to set it aside in a genre that has a lot of standout successes like XCOM: Enemy Unknown (a favorite of mine) or The Banner Saga, which delivered one of the most compelling strategy experiences I’ve had to date. Rather than compare individual facets of these titles, however, it’s much simpler to say that while XCOM and The Banner Saga are at once challenging games for veterans that are also fairly accessible, WARMACHINE: Tactics is a hardcore strategy game experience from top to bottom, with little compromise to be found.

At least, that’s the feeling. I often find myself lost among all the triggering different effects and struggling to keep track of what unit has what abilities and how to maximize the efficiency of my armies as I march on, but have inexplicably come out ahead in many of my conquests, regardless. There’s a wall of information to be tackled for newer players to the series that will likely drive many that haven’t immersed themselves in the tabletop game away.

It’s a simple enough idea to get started on: a grid-based strategy game that tasks you with commanding a squad with a fairly particular makeup against another, similarly constructed unit, in the hopes that you can defeat the opposing leader, or Warcaster. The Warcaster is the crux of your unit, not only are they quite powerful and feature a complement of special abilities, but they also control Warjacks, large constructs that resemble weaponized steam-powered suits of armor that can absorb and dish out loads of damage. 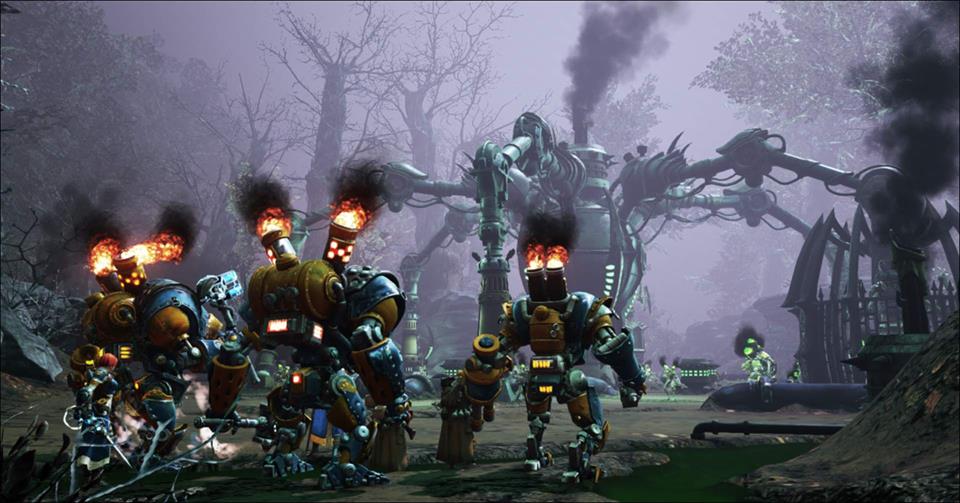 A squad can have a single Warcaster, will generally have two Warjacks, and a complement of basic troops of various kinds to round them out. There are currently four factions to play as, each of which has a unique look and playstyle to adjust to. The Protectorate operates with many spells and flame-based abilities, igniting enemies and letting them burn to death while keeping their distance and throwing up armored walls. Khador focuses instead on cold, using it to strategically lock foes in place and move to advantageous positions or isolate valuable units. Cygnar warriors can coordinate attacks to boost damage, making often weak units into threatening forces. The Cryx are undead units that corrode armor and focus on dealing damage at all costs.

It really does become clear quickly that this is a game that places less value on singular, powerful creatures, even if your often forgettable warriors don’t seem to be effective in any way. Overestimating the strength of your Warjacks is a surefire oath to defeat, even if they have six times the health of simple infantry. This is where the interplay between units comes into play beautifully. While Warjacks can act on their own, it is the Warcaster that is controlling them. When a Warjack is within range of a Warcaster, the Warcaster can allocate some of their inherent Focus into the Warjacks. Focus allows a unit to make extra attacks, cast spells, or boost the effectiveness of various abilities, so properly allocating this focus can turn the often slow, but hard-hitting Warjacks into a charging machine that makes four attacks per turn, decimating defensive positions or making multiple shots to surgically remove threatening units. Keeping Protectorate Cinerators in front of your errants and vassals can keep enemy units from pushing through your ranks while you rain crossbow bolts and spells down on them (oh, they’ll likely be lit on fire, as well). It’s a beautiful ballet, as many squads are evenly matched when you consider how they’re built—there’s rarely an obvious power differential in skirmishes, valuing in-game action over intense preparation.

The cost of all this is that WARMACHINE: Tactics suffers from a fair share of technical issues that must be overlooked to find the value in the rest of the game. It’s been in Early Access for some time, but was officially released November 20th. While there have been a few hotfix patches since then, the game still sputters often, even on high-end hardware, the framerate dips at seemingly random times, and the game’s cinematic camera has a lot of trouble finding a good vantage point to display the action from, often defaulting behind various objects or in walls.

Which is a shame, really, because the game looks great. Built in Unreal Engine 4, the game’s models and environments are highly focused and well-rendered, even down to small details on bricks. The actions taken by various units always feel like they have real onus behind them, and attacks from Warjacks look and feel as vicious as they should. 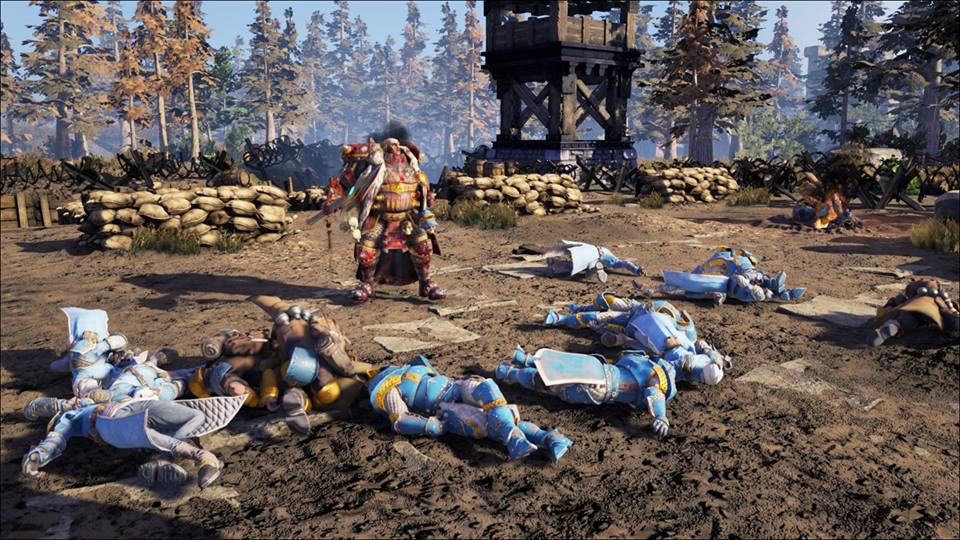 The counterpoint there is that the game just feels slow too much of the time, and while a single turn might only run six or eight minutes, selecting a unit, trying to read over its abilities, having to reselect the move button, having to click a button to determine facing, watching them run and pause and jump over an obstacle, pause, move, pause, jump down, pause, and finally move to the final point, having the camera refuse to reset to a high position, requiring unnecessary button presses to zoom back out, selecting a button, using a poor target selection tool to determine my target, then missing a 91% chance to hit shot just gets aggravating (and not because I was likely to hit, but because I had to wait so long for the miss). Similarly, while the game is well-presented, if you end up in a skirmish with the same faction as you, once the fighting starts, it can be almost impossible to differentiate between your and your opponent’s units, save for different-colored health bars—the units don’t really change color effectively.

It’s not perfect by any stretch. There’s a definite give and take: great animation, slow pacing; diversity of playstyle, high barrier of entry; clunky UI, outstanding fundamentals. The experience, however, for strategy fans is a positive one, to be certain. The game has a campaign that is mostly told through in-game rendered still scenes, but there’s not a lot of drive to go all the way through it. It’s quick and easy to throw together a skirmish match and get into the fight, however, especially if you’re familiar with the game concepts already.

Will the game enter the strategy canon for years to come? Probably not. But as an effort from a small studio, the game has impressive chops, and was obviously made by gamers to appeal to other hardcore gamers. With some tuning—particularly in the UI and some technical stuff—the game would enjoy a lot more screen time for me, and many others, I’m sure, so here’s to hoping that some of these issues can be fixed up. If you’re a strategy guy, especially one who likes tabletop gaming, it’s worth a look-see. If you’ve always wanted to try tabletops, it’s certainly a low-cost way to see what the fuss is about, even if the translation isn’t perfect.

The game is up on Steam for $39.99, and enjoys mostly positive user reviews, which is a good sign of quality. If the devs can keep up with the game and don’t let it languish, it’s one that merits a spot in your library. Check a trailer below.