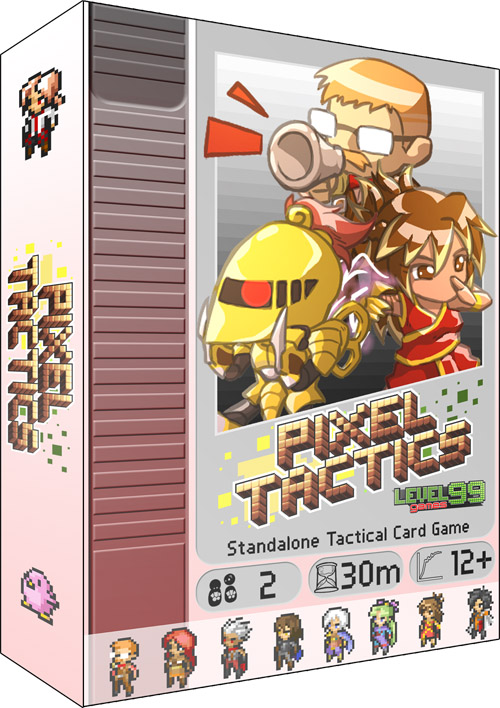 If there’s anything a gamer loves, it’s war. Pixel Tactics not only agrees, but provides a quick and relatively simple way to wage that war between friends.

Hailing again from Level 99 games, Pixel Tactics is the more strategic and, in a sense, violent bigger brother to Sellswords, though they share a number of characteristics.

Building from a prebuilt deck of soldiers, Pixel Tactics tasks you with selecting a leader and building a cohesive military unit. Each hero in your unit brings a specialty to the cause based on their position in said unit. It’s a game that rewards intensive planning and forethought. It’s not enough to put your strongest units on the front lines, you need to consider your leader’s abilities and marry those to your support units—all of which culminates into a game whose cartoony look belies its complexity. 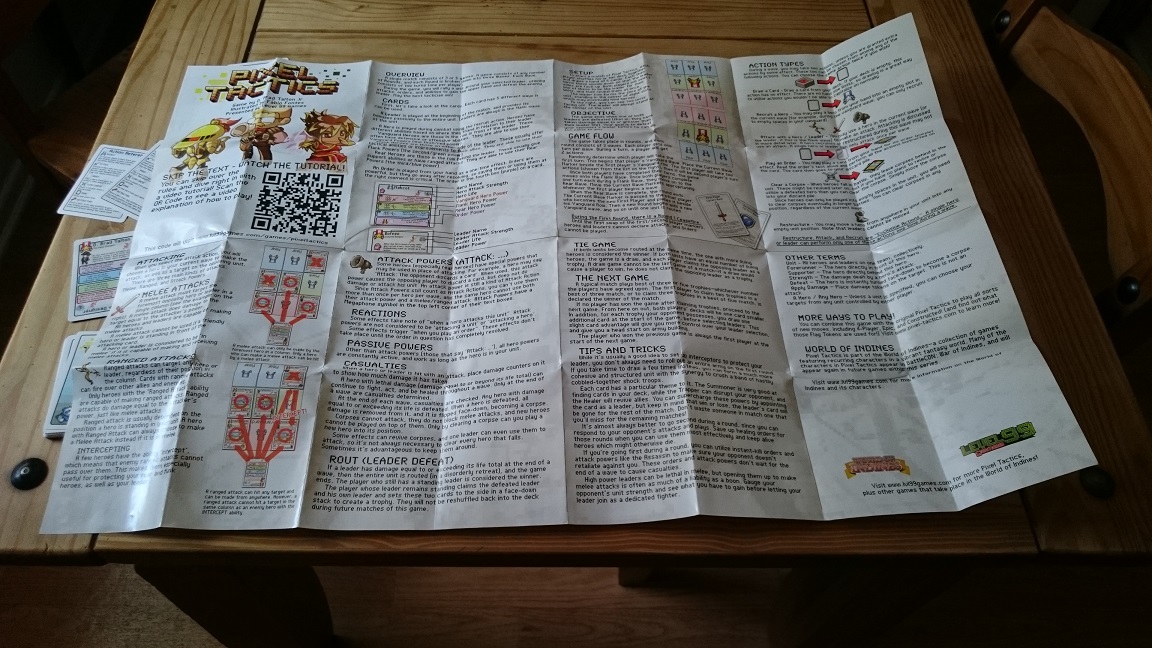 The first barrier to surmount in the game, however, is the somewhat imposing rule sheet, the reverse side of which is a handy, but ultimately not mandatory game board. While not inherently too difficult to grasp, the rules could use a dash of clarity—I play quite a few board games, and found that this particular game took more than a few rounds before I really had it down solid. Even then, there are still a few bits that I feel as though I’m making assumptions on—the starting hand, for instance, is left unmentioned.

We’re getting ahead of ourselves. The board is laid out basically as two 3×3 grids facing each other. From back to front, each row of your grid is unique: the Vanguard, the Flank, and the Rear, respectively. The only unique space is the center, which is reserved for your unit’s leader. Recruiting a hero to a particular wave determines its qualities, and is the primary draw of the game. While each deck is identical, sporting the same 25 units each, you can essentially consider every unit five-fold—each functions differently as a Vanguard, Flank, Rear, single use Order, or Leader.

And initial glance at each card can be confusing, but is ultimately easy to understand. The sword is the unit’s strength, the shield its health, a red Vanguard ability, a green Flank ability, blue Rear ability, a purple Order, and inverting the card makes it a Leader. Once the field is full, it can be a little imposing to keep track of all of the effects bouncing around. 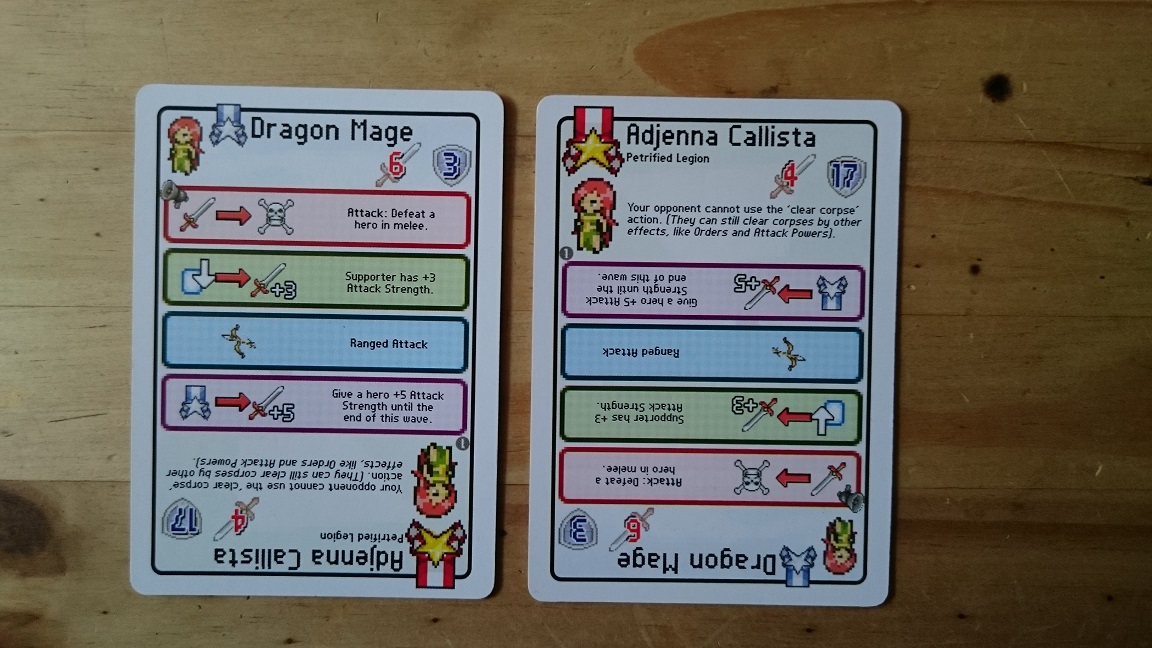 The game begins by shuffling the deck and drawing five cards. One of these is selected to be your unit’s Leader, and provides a very powerful global effect that drastically alters the way you’ll play the rest of the game. The Planestalker as a Leader (Zaamassal Kett) gives all heroes in your unit ranged attacks (an ability that’s usually fairly limited). Another, the Trapper (Khadath Ahemusei) gives all heroes in the unit intercept—ranged attacks can’t pass over them. One allows you to recruit heroes as a free action, making massive armies in a short amount of time. Some make it so corpses can attack, another can take any lethal damage that would be applied to a hero in their unit onto themselves. It makes for some really intriguing ways to not only build an army, but to utilize a particular hero in different ways to combat that threat, especially when you consider the ridiculous number of combinations of opposing Leaders that can exist.

It’s difficult at first to keep track of the limitations on play. The terminology can be a little strange, but a “round” consists of three “waves”, each relating to one of the waves on the board. A “turn” isn’t really solid nomenclature in this case. It’s most easily described as such: one players is randomly determined to go “first”. That played takes their Vanguard wave. Then the second player takes their Vanguard wave. The first player takes his Flank wave, followed by the second player. The first player takes their Rear wave, then the second player follows suit. Then, in a small twist, the players switch their “first” and “second” roles. The player that takes the second Rear wave, for example, will immediately take the first Vanguard wave on the next turn. Heroes can only be recruited into the current wave, same with making attacks.

This is important for a variety of reasons—the game is, in a sense, biased to the second player at times. Reacting to an opponent’s strategy in a given turn can often grant you a stronger position. If the first player plays a strong ranged unit with the intent of attacking your more vulnerable heroes, you can in turn attemot to either introduce some damage resistance, put a special interceptor unit in front of the target to block ranged attacks, focus your assault on said unit before the opponent has a chance to utilize it. Still other cards can provide separate bonuses depending on whether or not you’re the first or second player. 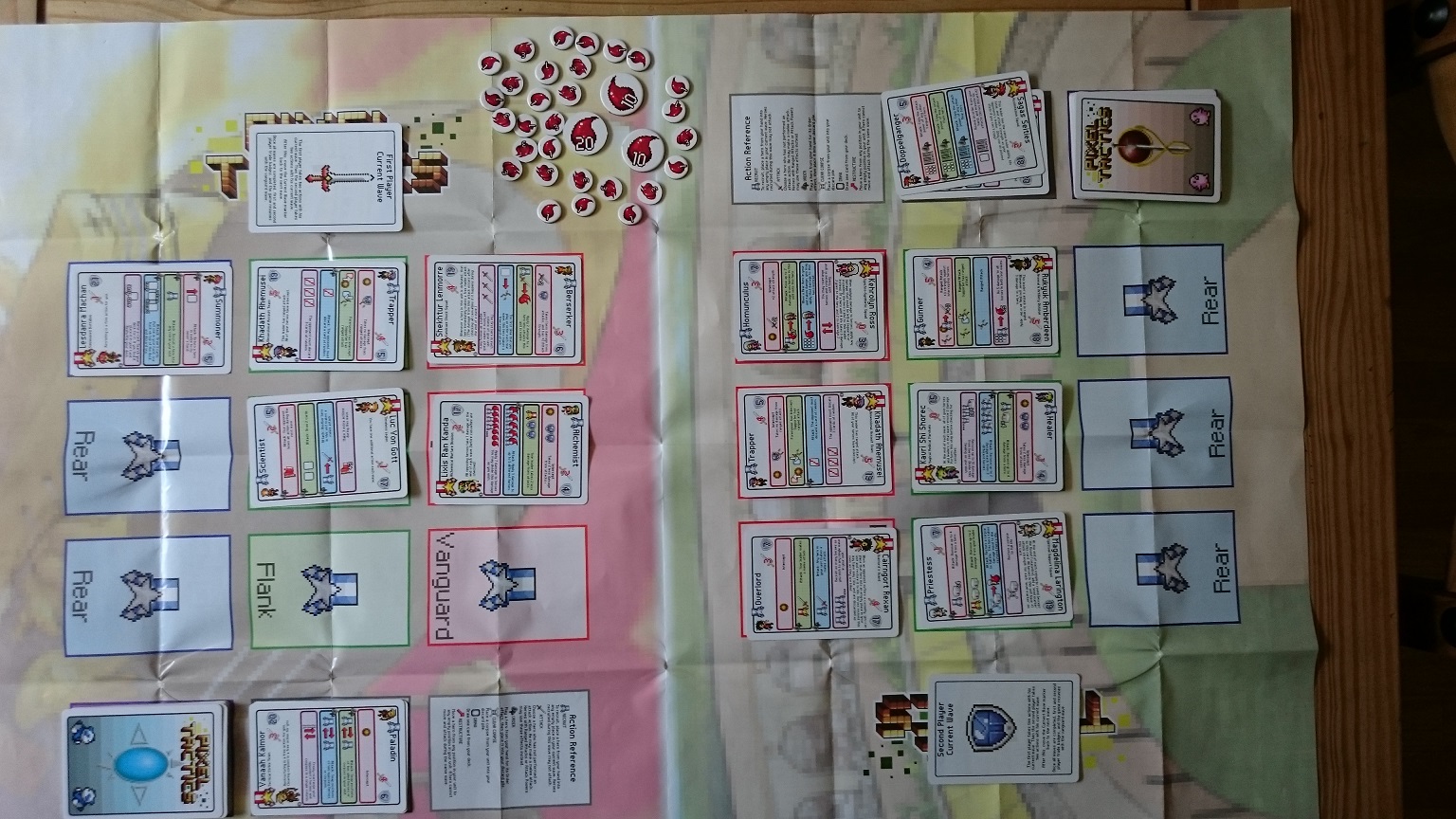 Each wave, you can take two actions: draw a card, recruit a hero into the current wave, make an attack, play a card from your hand as an Order, clear a corpse, or restructure your unit (move one unit to an empty space). Each turn feels immensely limited—some special circumstances aside, don’t expect too many massive power plays in a game. It’s a slow burn.

At the same time, the game’s tactical component is very strong. One of my matches drug on for a surprisingly long time—despite the fact that I remained in an advantageous position early in the game. My opponent was able to waylay most of my plans by constantly placing and reshuffling their unit to prevent me from doing significant damage to their Leader. They made surprising headway, as my side of the field filled up, restructuring my unit or playing new heroes to address their new threats became impossible. Though they were on the defensive, they could devise new plans, surgically strike key targets in my unit, and attempt to dodge my attempts to deal damage at most junctures. It was a losing battle for the most part, but opportunities presented themselves that might have allowed them to press an advantage and gain an upper hand.

And, to me, this is a testament to the game’s strength. The rules are simple enough to pick up with relative ease, but you’ll have a huge benefit having an experienced player on deck to make sure the flow is maintained. Also, while an experienced player might be able to form a better plan, a strongly strategy oriented player could counter, even as a newbie, and would have a decent shot at victory.

Consider the following player, for example: 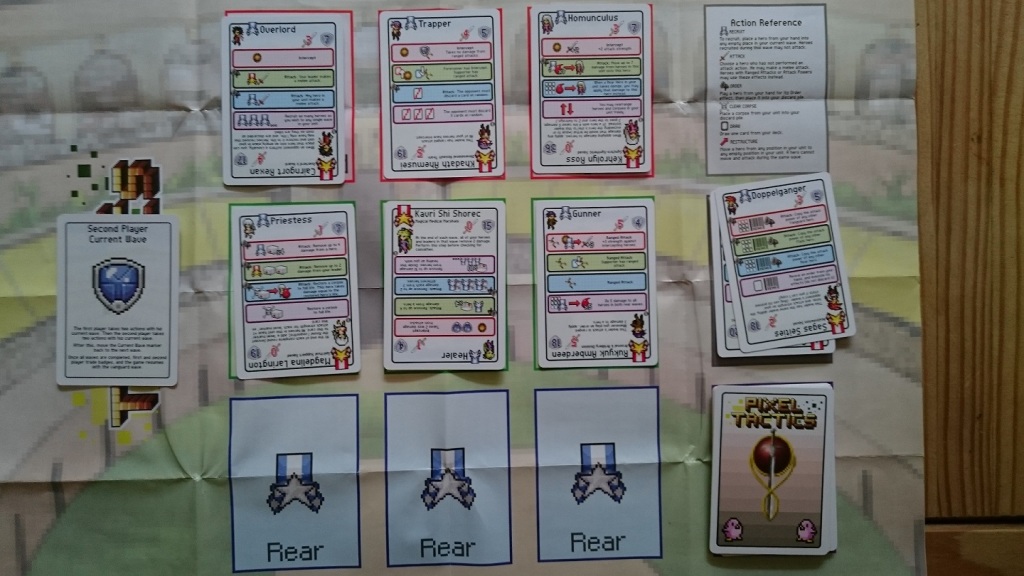 The player has a good start, using interceptors in the front row to avoid ranged attacks, and protecting their gunner. Since their Vanguard also has high health, and their Leader removes damage at the end of each wave, the Player is actively utilizing their Leader’s skills to form a powerful defense. This could easily segue into a more powerful and cohesive unit that looks more like this: 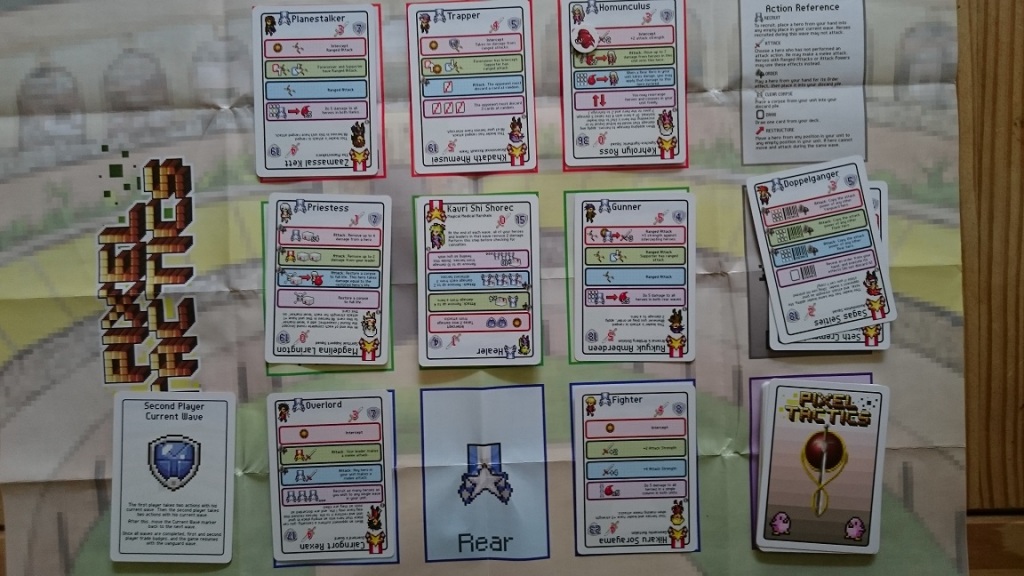 Placing the Fighter behind the Gunner on the right not only increases the Fighter’s strength by 4, but the Gunner grants the Fighter a ranged attack in the process, allowing him to strike any unit on the other side of the field for massive damage. The Priestess can heal the Leader in emergencies. On the other hand, consider our other player, who might have less knowledge of the game: 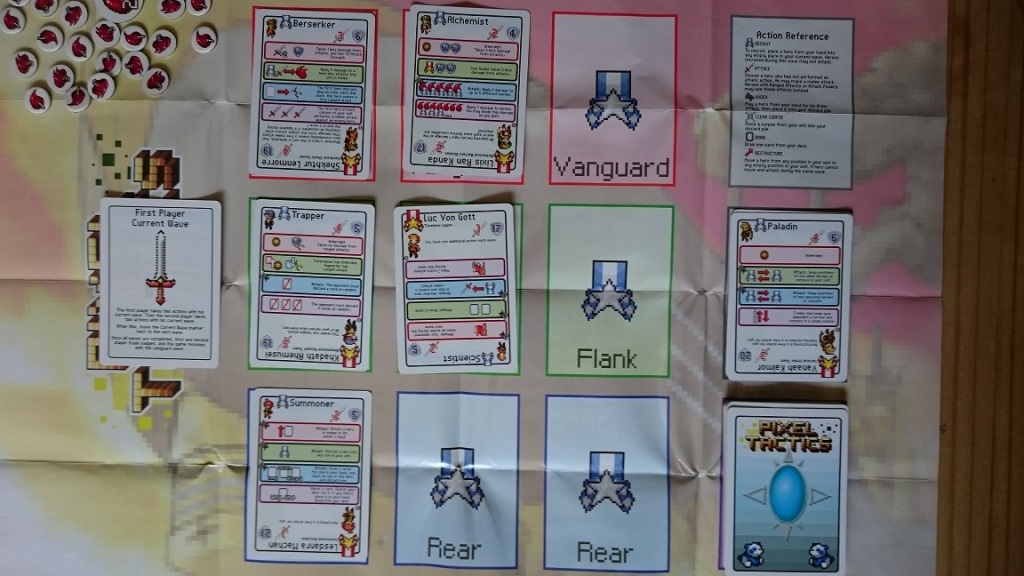 There is some synergy here, as the Trapper grants the Berserker intercept, and the Berserker gains damage reduction in the Vanguard. There are fewer targets available here, however, making it easier for the opposing player to focus damage on key targets and remove them. If the player is placed on the defensive, they may panic and try to over recruit, causing a situation similar to this: 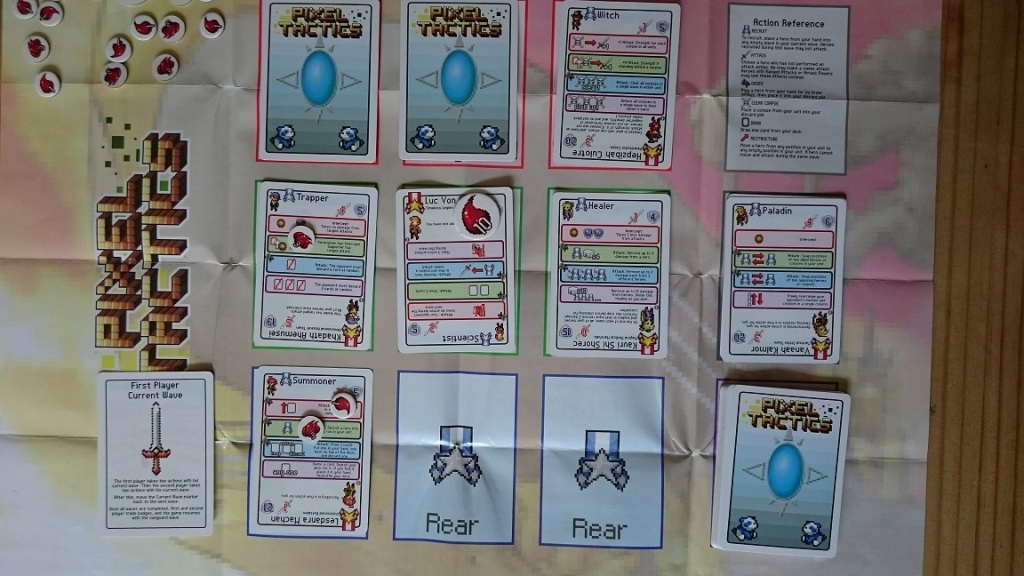 In this example, the player has already incurred losses and not cleared the corpses to rebuild a defensive front, which has exposed their Leader to damage. At the same time, the Trapper is less effective, granting no bonuses to the card in front of it. The player is hoping to use the Witch in the top right to use the corpses for extra strength, but without intercept in front of their Leader, defeat is imminent.

A match is considered by the rules to be 3 or 5 rounds, a round ends when a Leader takes lethal damage, sending his unit into rout. The victor claims the enemy Leader pairs it with his own, setting them aside as a trophy and ensuring those cards don’t appear in future matches. That hasn’t held up in practice, however—the box claims a match will take about a half hour, but all my games have been a single round has taken several hours in the past, and often this results in little desire to continue any further. I wouldn’t necessarily consider this a flaw—and it could be a side effect of having to teach the other player how to play the game—the game is fun enough to merit single round games in most cases.

It’s not a stretch to make any assumptions about the art style of Pixel Tactics. The game features colorful, but adorable little soldiers printed on their cards, and uses a basic set of symbols to quickly represent a card’s abilities, handy to streamline the process once you’ve got a few more games under your belt. The game uses two decks of cards and a series of small cardboard damage counters, so the game won’t fall apart as soon as you buy it. In the whole build, the only complaint I’d have is that the mat is fairly large, and difficult to really lay flat—mitigated by the fact that the mat is not required for play, as long as you know how the board needs to be laid out.

All in all, the game isn’t totally meant for the complete newbie, but a casual but regular board game player (or a video game player with a strategic bent) should be able to pick the game up with few issues. The two player limit kind of prevents the game from being a real hit at the party, but is still worthy of attention for the occasional small get together.

Check the game out over at Level 99’s website, and find it at your local game store in you’re interested. The game shouldn ‘t break your wallet (MSRP $14.99), and you’re bound to have a great time going to war.