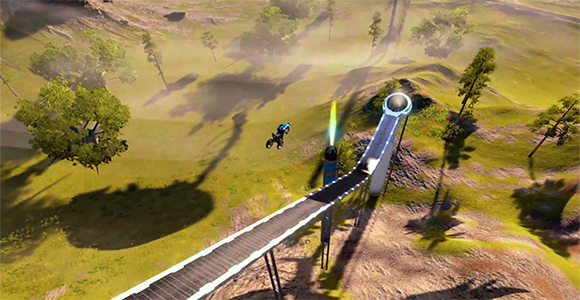 Red Lynx struck gold when it introduced Trials HD to a hungry indie-loving crowd back in 2009. The 3D-toned side scroller offered gamers a playground to test their speed and balance, and with a slew of mini-games and leaderboards, Trials HD instantly became an arcade classic. Fast forward to 2014 and Red Lynx is still actively improving on its ever popular world of motorcycle stunting and obstacle conquering. The developers newest arcade creation is Trials Fusion, a release that is classic to the brand, but filled with modern and futuristic flair.

Before Red Lynx introduced gamers to this iconic franchise, the virtual side of bike trials was filled with nothing more than two-dimensional flash games and cookie cutter environments. Trials HD built the foundation for the developers specialized mixture of 2D and 3D elements, by giving us traditional trial bike settings, amped up to a visually appealing and immersive level. Throughout each release, creators have reached further outside of the box, leaving the “classic” comfort zone and exploring new and interesting locales for obstacle-based challenges. Gone are the times of simple construction yards and archaic wooden scaffolding. Red Lynx has succeeded in imagining a massive world of creative obstacles and interesting settings. 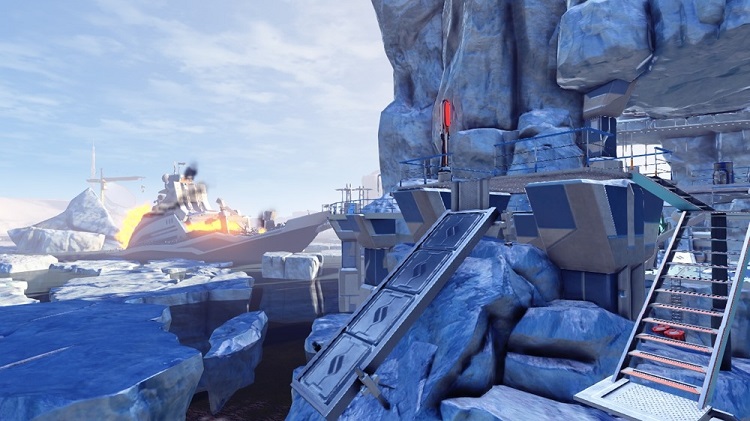 Trails Fusion is the developer’s most artistic and visually whimsical release to date. The team has succeeded in taking the classic gameplay elements from their original series and blended them with very futuristic environments. The end product is a visual firestorm of explosions, collapsing landscapes, and whirling debris. Each level is filled to the brim with moving parts and eye candy, specifically when it comes to the impressive backgrounds. It’s easy to lose focus on what you’re racing over when you catch sight of all the animations and artistry happening in the distance. 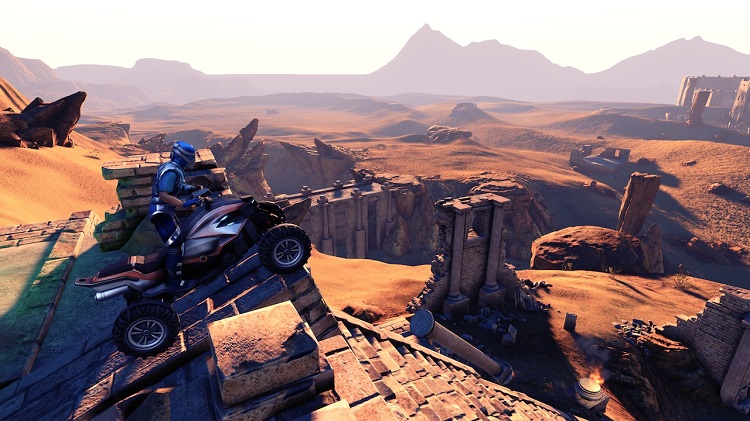 You’ll also find a plethora of secret areas, and even level transitions that will spit you into “other dimensions” and very futuristic settings. The camera even switches to a first-person view on occasion, or changing camera angles to better enhance the experience. There are a lot of unique and interesting visual twists in this release and we really give a lot of credit to the artists for creating such an entertaining and imaginative stage.

Fusion may be a visual playground, but it still manages to offer up some solid and often entertaining audible effects. From the first training session you’re introduced to a female-voiced two-wheeled A.I. named SynDI. The intelligent being within your bike offers a lot of audible comedy, often engaging in odd exchanges with the male environment A.I. found throughout various levels. and sometimes providing little zings and quips of humor when you pass through a specific area. 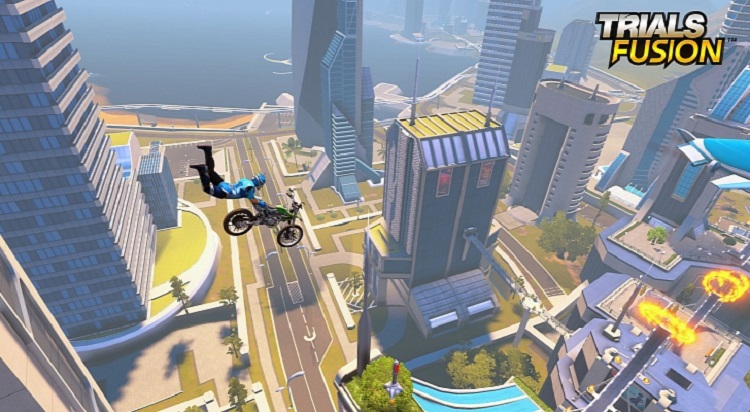 You’ll also hear a plethora of outlying sounds, with explosions, and crashing metal ringing through the air. The loud roar of your bike is always present, flanked by subtle creaking as you lean the frame back and forth. There are quite a few sounds to take in during each level, but these effects can become a prison to anyone who plans on perfecting the release. Most of these sounds and conversations are triggered once you reach a certain spot within a stage, which can cause a very repetitive sound-based headache if you’re forced to restart a level in order to post a perfect score.

The classic formula that has remained the staple for each of Red Lynx’s titles makes a triumphant return in Fusion, boosted by the old adage “if ain’t broke, don’t fix it.” The basics are just as simple as they have always been. Gaining expert control in acceleration and breaking, paired with subtle leans forward and backward are the keys to success. You’ll be aided by a few training sessions that will help to reinvigorate your past skills, which will be truly put to the test in the second half of a lengthy 42-stage campaign. 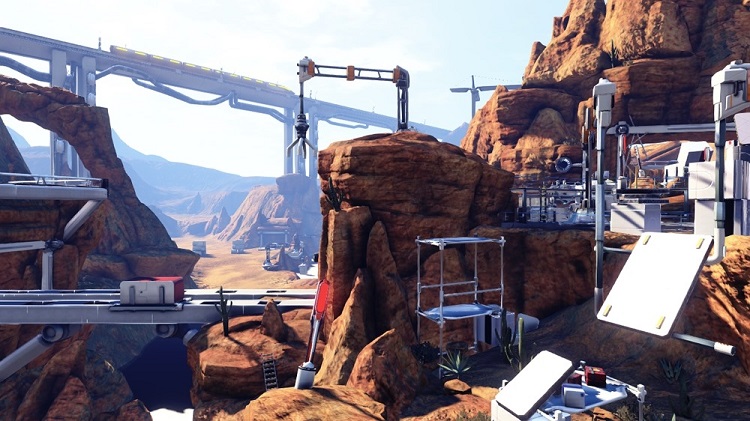 There are a few distinct differences with this release that make it a more memorable title. The futuristic settings and mass of challenges really add a lot of depth and replayability to Fusion. Each campaign stage offers up three separate challenges, ranging from simple tasks to the discovery of secret areas and sub-stages. Each challenge offers a monetary reward, as well as a badge of honor, as some requirements can be rather difficult.

We also see the introduction of the FMX system, a module that adds tricks to the already hectic world of trials. You used to accumulate points per level by back flipping and holding wheelies, but you can now grab some extra credit by performing superman’s, handle bar flips, and a variety of other tricks. The FMX system is activated by the right thumbstick, and the trick performed depends on both the direction of your bike, as well as the direction you push the thumbstick. Unfortunately, the entire FMX system seems a little off, and the precision in which tricks need to be performed is rather tight, which can make it difficult to perform the exact trick you’re looking for. 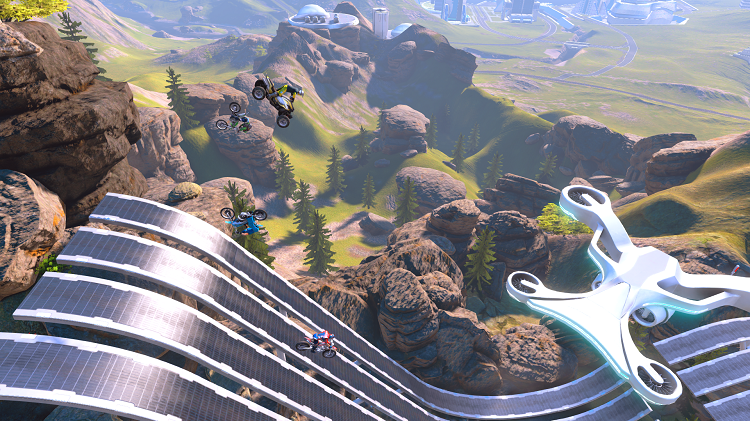 Those of you who are artists at heart should be enthralled by Fusion‘s impressive track building tool. A plethora of decorative and rideable objects, both urban, and nature-based are available. These objects can be rotated, raised, lowered, and placed virtually anywhere within a level to create an almost endless set of paths and stage possibilities. Better yet, there is a very impressive social module that contains a massive list of all of the created tracks submitted by other players and enthusiasts. It’s very easy to build and share with Trials Fusion and with more and more user-created tracks hitting the servers every day, you’ll be able to experience news challenges long after you’ve completed the main game.

There is even a small multiplayer section, allowing you to battle it out with friends locally. You’ll even be able to race against your own “ghosts,” as well as friends across a variety of tracks and mini-games.

Trials Fusion is a great addition to the series, and while there may be a few annoyances like the repetitive soundtrack, and the lackluster FMX system, the game still manages to be a supremely entertaining journey. The massive amount of user created content, paired with a lengthy campaign, solid creation tools, and a tricky challenge system, gives this title a lot of replayability and should keep us more than occupied until Red Lynx decides to crank out the next installment in the Trials Saga.