Oftentimes when you find mobile titles adapted for consoles or PCs, you run into a lot of issues, particularly when it comes to the interface and controls. Such was the case with the recent Sneaky Sneaky, but Wired Productions has managed to pull of a version of a mobile game that wasn’t completely awful with the retooled controls for the PS Vita. 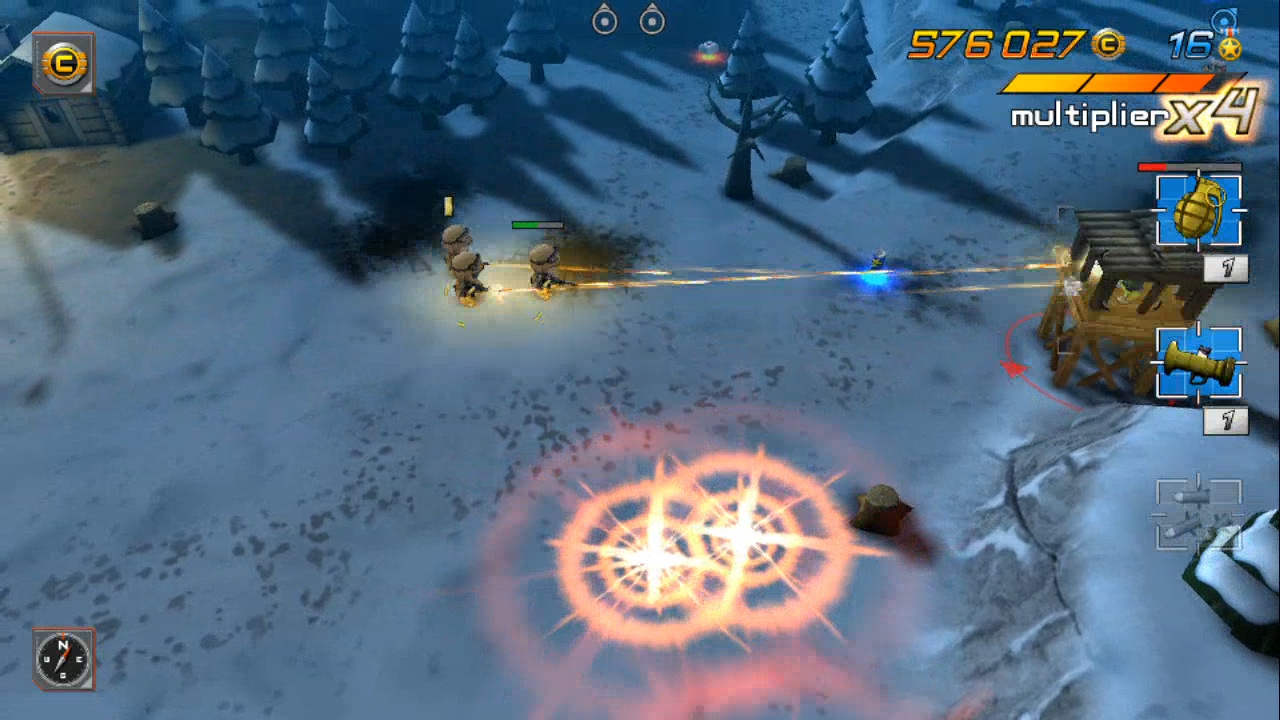 The game tasks players with navigating a small squad of cartoon-inspired soldiers through a variety of environments, tackling squads of infantry, tanks, and weapons embankments. Along the way you snag dog tags and earn points in order to purchase upgrades between missions to enhance your soldiers’ effectiveness. You’ll also find medals that can unlock specialist troopers or revive troops that have been killed in action in order to preserve their rank.

The game follows a pretty solid difficulty curve. Early missions are simple and short: kill a few enemies, make it to the extraction point, no problem. By the end, however, missions are on significantly larger maps that can take in upwards of twenty minutes at a time to complete. The obstacles in your path might start to demand quick reflexes and proper planning in order to make it through with minimal casualties.

In order to complete your missions, you’ll need a little assistance here and there. Each individual mission gives you an initial squad, but it can be supplemented using CP earned through a variety of in-game activities. Once unlocked, various specialist troops offer an extra gun for a single mission as well as a variety of other effects: bringing grenades or rockets without having to purchase drops mid-mission, healing wounded soldiers automatically, or having special heavy weaponry that normal troops don’t have. If you run into a situation you cannot surmount with your current loadout, you can spend CP for air strikes, rockets, medkits, or speed boosts.

Though so many ports suffer from serious control issues, Tiny Troopers: Joint Ops avoids the issue by adapting controls for the dual sticks on the Vita and PlayStation 3. Touch controls on the Vita are still intact should you want to tap an enemy, as well as for targeting your air strikes or shooting rockets. But adding physical controls make it significantly easier to adapt to high-pressure situations and dodge enemy fire when things get hairy. 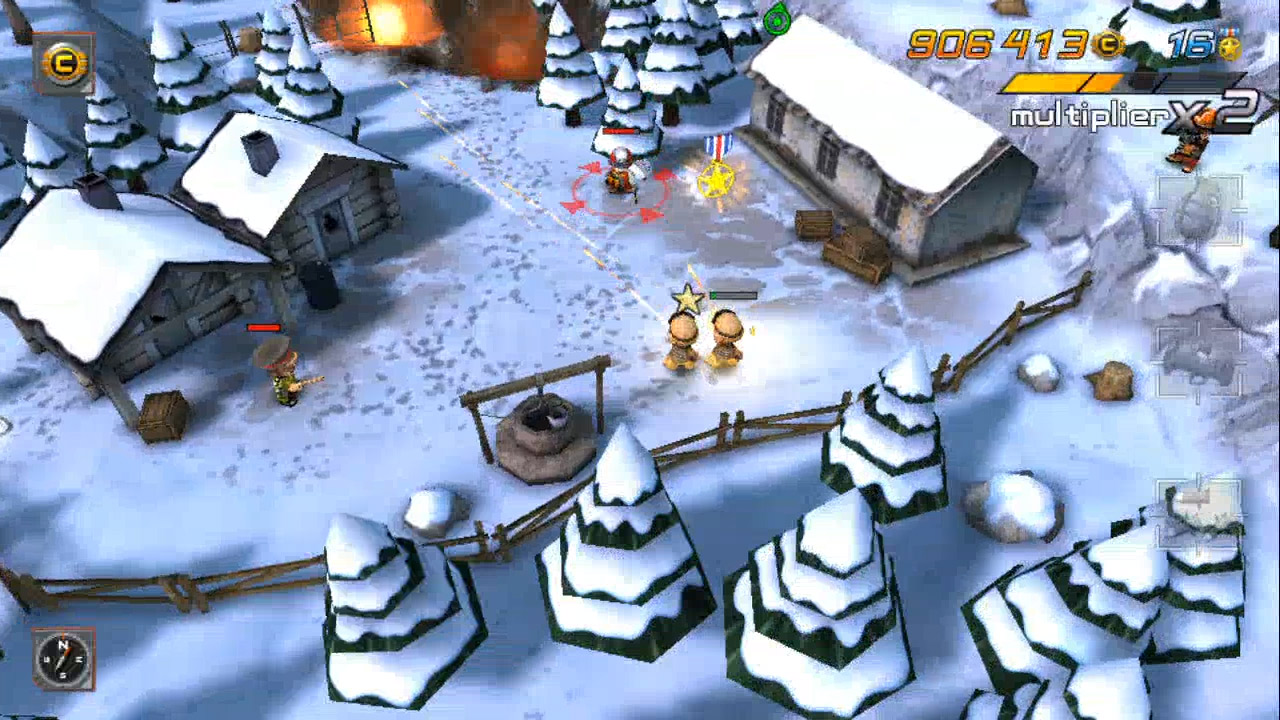 It’s an elegant solution to a problem with mobile controls for top-down games like this. When the tap is your only source of interacting with the game, you tend to muddy the clarity of your actions. Tap empty ground to move, tap an enemy to fire, for instance. But if your accuracy isn’t quite pinpoint, you might mistakenly engage when you meant to strafe, change targets too soon by mistake, ruining your focus fire.

Analog sticks repair these issues easily, adding a degree of precision lost on traditional mobile interfaces, while also allowing you to dynamically change targets while moving. The intensely generous auto-aim doesn’t hurt the system either. It’s not the most finely tuned dual stick ever made, play something like Super Stardust Delta or Dead Nation if you are looking for high-end stuff on these platforms.

As a mobile title, don’t expect anything groundbreaking in the visual department. Troops look like hardly more than off-brand LEGO figures. There’s some decent variety in locales, early stages are rather stereotypically Middle Eastern looking, but you’ll also move through urban areas, and snow areas, as well. 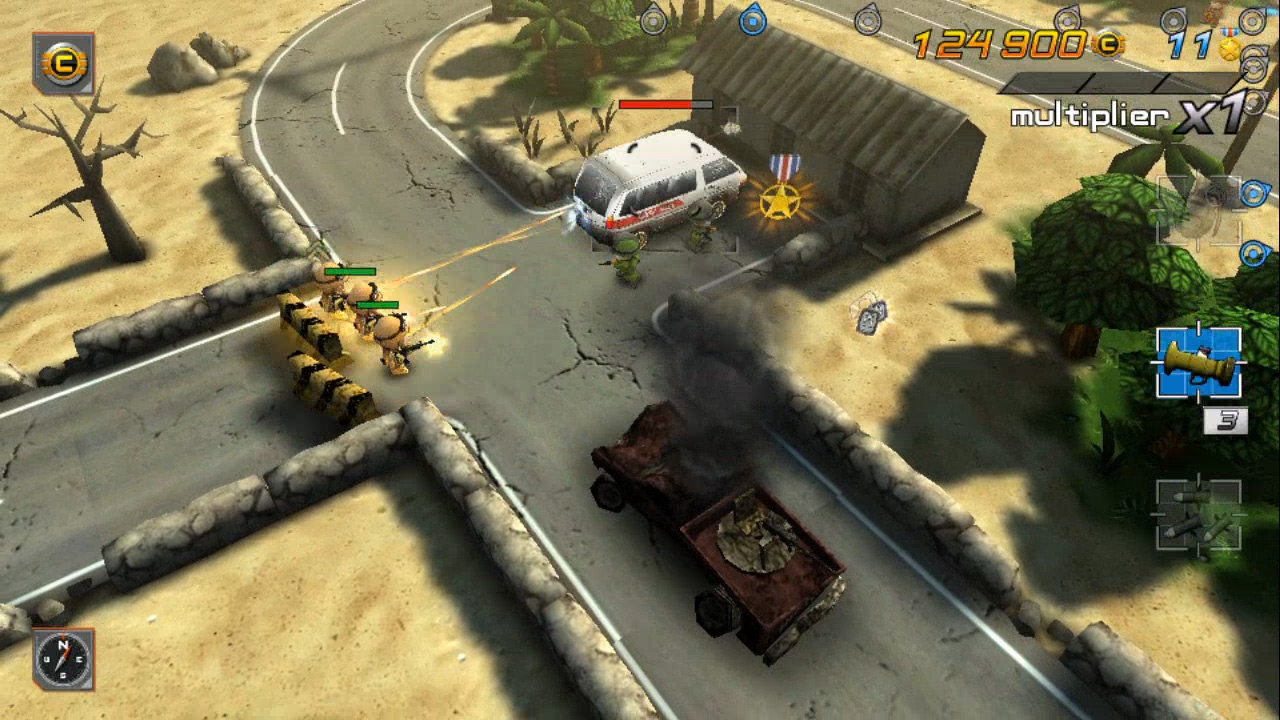 The game has a basic tutorial, but does little to explain some of the nuances of gameplay like avoiding innocents on the battlefield. The gameplay beyond that isn’t particularly complicated—shoot enemies with the stick, don’t get shot, toss/shoot explosives at bunkers and tanks, duck if things that go boom are flying at you, and follow the blue or green waypoints. It’s a totally passable casual experience, one that’s good to play while half-paying attention to TV shows or tuning out conversations that you still need to interject in occasionally.

It’s admirable that the game managed to dodge the pitfalls of other mobile ports. While there wasn’t tender love and care paid to each individual aspect of the game, Wired didn’t cut corners where they shouldn’t, enacting a better control scheme and ensuring that the game remains playable in all forms instead of gimping the platform. The only real issue is that what might have once made a solid mobile game is only an average or totally casual experience on a dedicated gaming console. There’s no semblance of plot but the game also doesn’t try to be anything it’s not, so there are no broken promises when you nab a copy of the game.

The game won’t break the bank either. It’s free on mobile platforms, but runs $7.99 on consoles. The game is cross-buy, so picking it up for one system will net you all the others at no extra charge. Eight dollars feels a little steep for what you get, but if all you need is something fairly simply to keep you occupied in busy moments, you can certainly do worse.