With the release of The Last Door – Collector’s Edition last week, fans of the horror genre may be wondering if it’s time to jump on this game’s bandwagon…and if this new edition is worth the price.

The Last Door is a Flash-based point-and-click horror game developed by indie studio The Game Kitchen. It was originally funded on Kickstarter, and has continued to release new “chapters” (i.e. levels) with financial support from its players. The Last Door is currently funded by a  backer program run through the game’s website; backers who donate to the development of an upcoming chapter will get to play the chapter as soon as it comes out, for free. The chapter later becomes available to everyone, again for free, on the website.

The version that will be reviewed here is The Last Door – Collector’s Edition, released May 20th on Steam, GOG, and other online stores. For its $9.99 price tag, the Collector’s Edition boasts the first four chapters of the game, with “exclusive new locations, scenes, puzzles, stories” and “enhanced graphics and remastered sound.” Minor spoilers will follow, though I will do my best to avoid mentioning puzzle solutions, plot points, or other moments of importance. 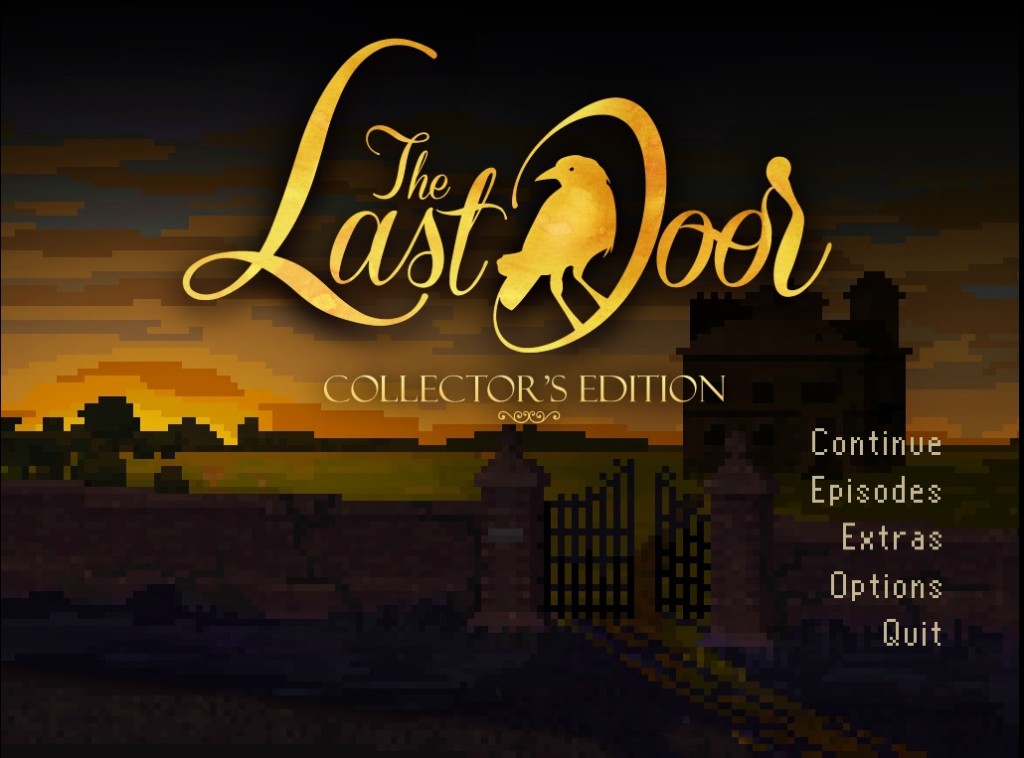 In The Last Door, you play as Jeremiah Devitt, a Victorian gentleman who—in the time-honored tradition of horror game protagonists—is far less disturbed by even the most atrocious of oddities than the player will inevitably be. The game begins as Devitt receives a mysterious letter from his former schoolmate, Anthony Beechworth, and sets out to investigate. Each chapter features a different creepy locale to visit as you pursue the truth. 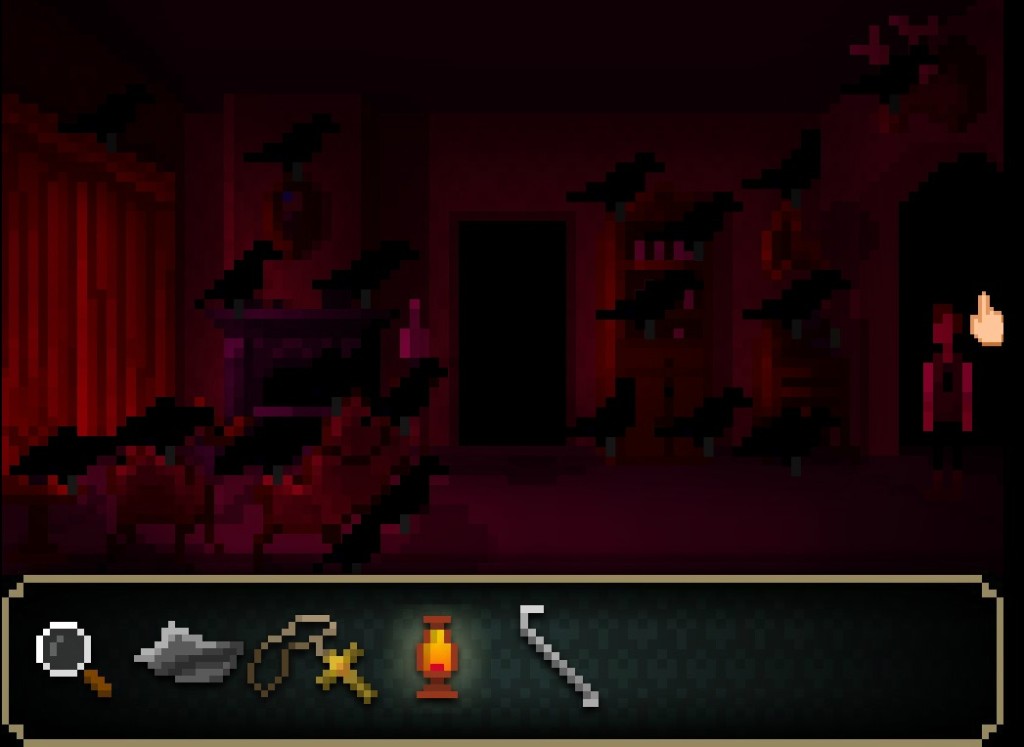 An immediately charming feature of The Last Door is the structure of its chapters. Each begins with a short scene in which you play as a character other than the protagonist, and which gives a short glimpse into what you can expect to find as events unfold. These short introductory scenes do a fantastic job of setting the mood for each chapter before the story even really begins. On the ending side of each chapter is a short cutscene which, sooner or later, takes the story out of the hands of the player, forcing you to watch helplessly as Devitt’s fate takes what turns it will. 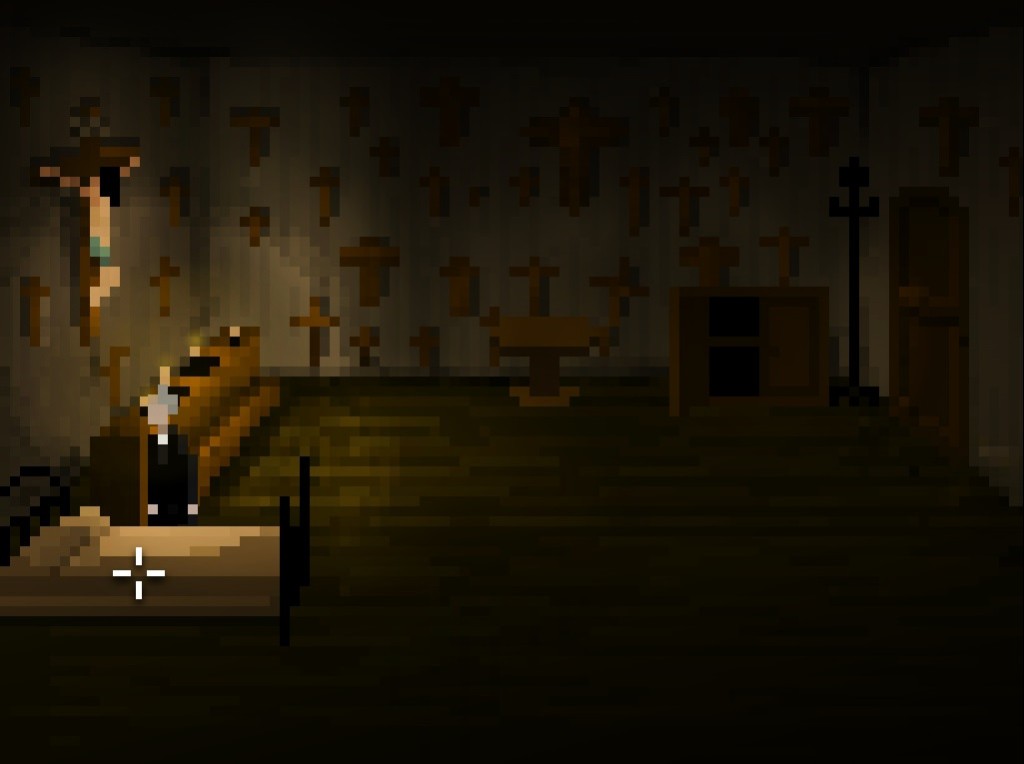 Contributing more than any other element to the establishment of an appropriately horrific atmosphere is perhaps the best feature of The Last Door: the music. I am hardly a music critic; for horror games, though, music is a must—where would the Silent Hill series be without Akira Yamaoka?

The Last Door‘s original tracks by Carlos Viola are superb, with a classical sound that is perfectly period appropriate. The dominance of strings in many of the tracks lend both beauty and tension to much of the game, and the piano-heavy tracks definitely bring oppressiveness to the atmosphere when called upon. This music would be a delight in any game, but it shines even more in The Last Door, where it is not just a background element, but heavily relied upon to bring the game together.

The sound design outside of the music is also worth a mention. While the sounds used are standard fare, there’s an impressive attention to detail here: listening to a crow’s dying breaths as it sits in your inventory is probably not something you ever wanted or expected, but once it’s happening it’s hard not to appreciate the creativity of that sort of macabre flair. 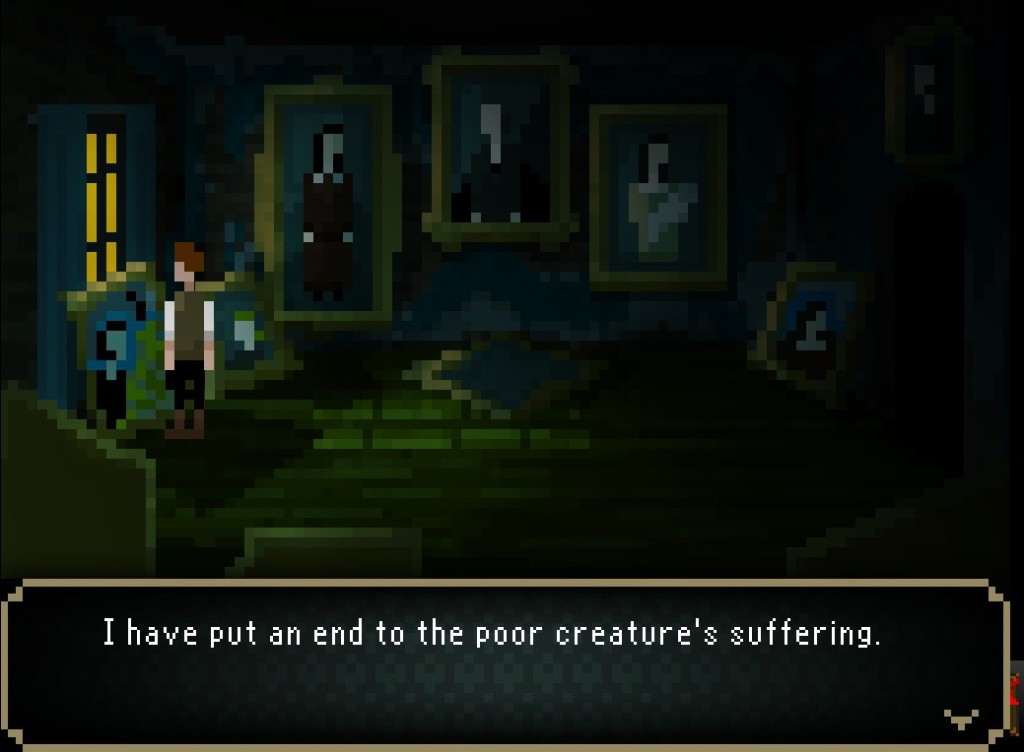 As for the gameplay, The Last Door is likely to be what anyone who has played a point-and-click adventure game before would expect. Most time is spent exploring different areas to collect objects which can then be used to solve puzzles. This style of gameplay is pretty unexciting by nature, but if you’re not totally averse to it, The Last Door does make it enjoyable. One notable feature the game uses, to its credit, is that after the player clicks on an item to examine it, she’ll have to click once more to actually pick it up. This adds a small but significant extra layer, in that it is more difficult to just muddle your way through the game—that extra click forces you to pay attention. 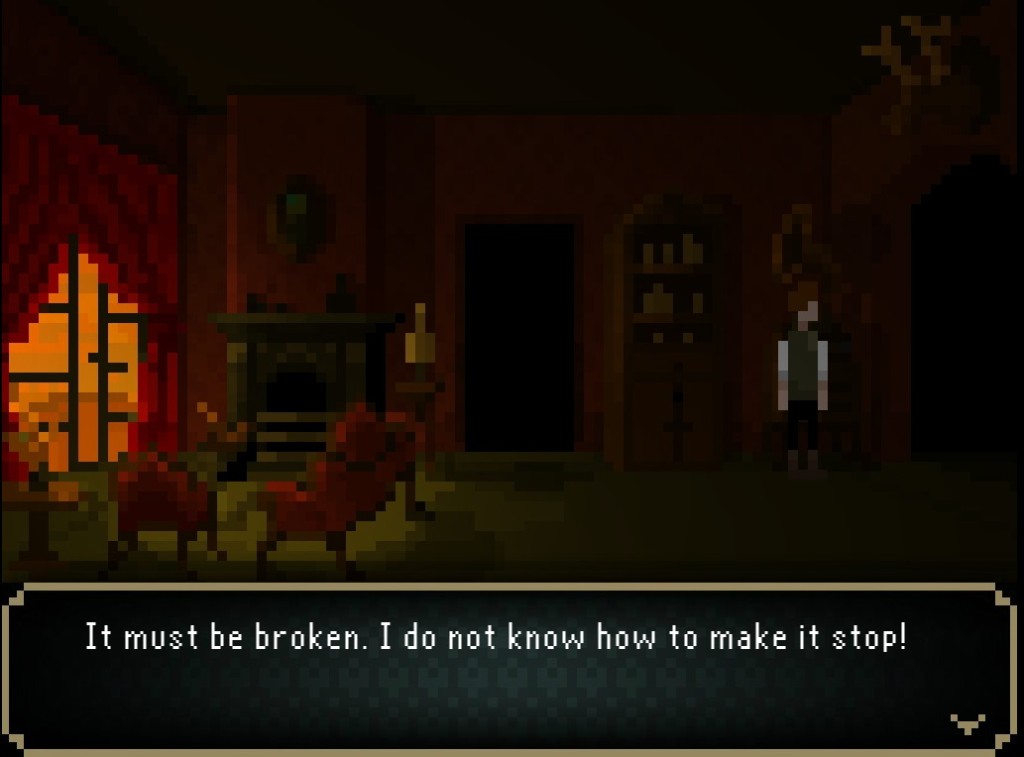 The Last Door‘s puzzles are often challenging, and though frustration is a possibility, the game is far from a cake-walk and likely won’t leave you bored. The puzzles are also, for the most part, solvable based on logic—you won’t have to try using every object on every other object (though if you’re like me, you will anyway, just in case) to get a result, but rather need only think rationally. I greatly enjoyed chapter 3’s “fanciful Daphne” puzzle—which comes with a helpful note-based hint for players who aren’t familiar with Greek mythology—and am quite pleased that the game generally provides the player with all necessary information, rather than being needlessly obtuse or requiring arbitrary trial-and-error. 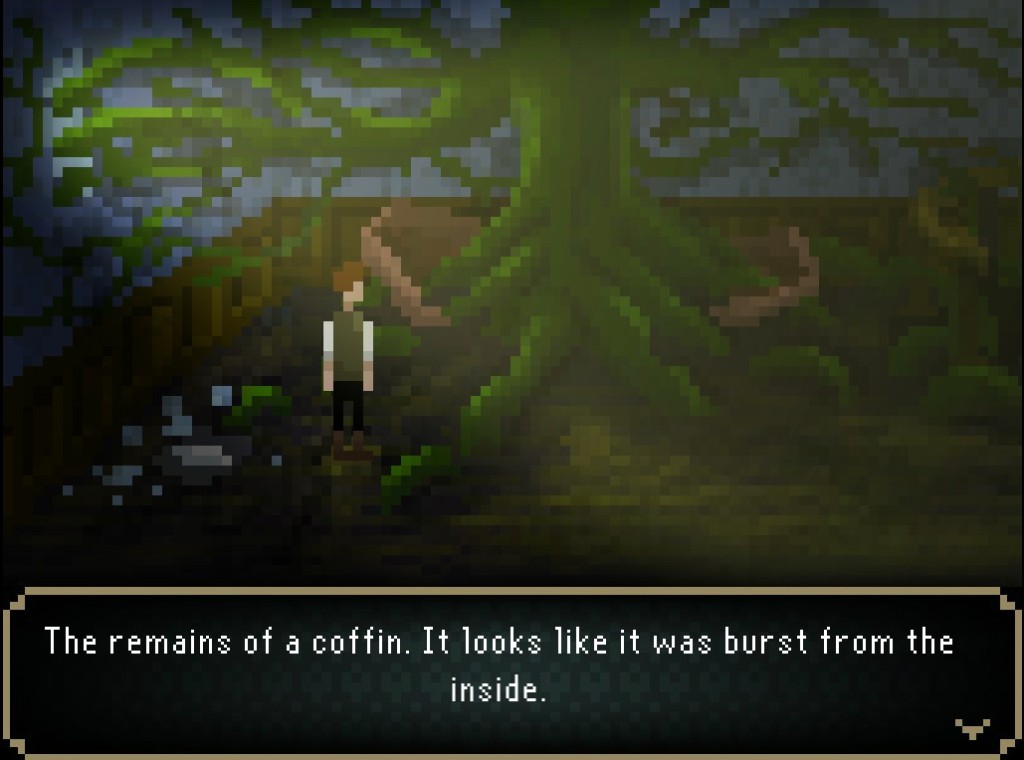 The game’s main weakness is its writing. This may be a result of the developers being based in Spain; telling a story in your non-native tongue is a difficult challenge. Regardless, it is sadly the only thing holding a good game back from greatness. The plot itself is fairly intriguing: there are enough mysteries to make most players want to find out more, and each chapter is paced well. The Lovecraftian influence is certainly there, and refreshingly, the game draws more from stories like Herbert West—Reanimator and From Beyond than from The Call of Cthulu. Still, in this area, The Last Door is more competent than groundbreaking.

Further detracting from the overall story experience is the game’s text. If you are familiar with Lovecraft, and are hoping for the influence of his rich prose and particular vocabulary, or an adept expression of his existential nihilism in the dialogue and notes you will find throughout the game, prepare to be disappointed. It’s not unreadable by any means, but any chills you get while reading the game’s text will likely be from its content, not its style.

Furthermore, much of the text in the game could have benefited from an additional proofreading pass. I say this not as a prescriptivist, but because some of the text reads as jarringly unnatural, and at worst is difficult to understand, particularly in chapter 2. I don’t expect this to be game-breaking for anyone, but it is disappointing in a paid game, indie or not. 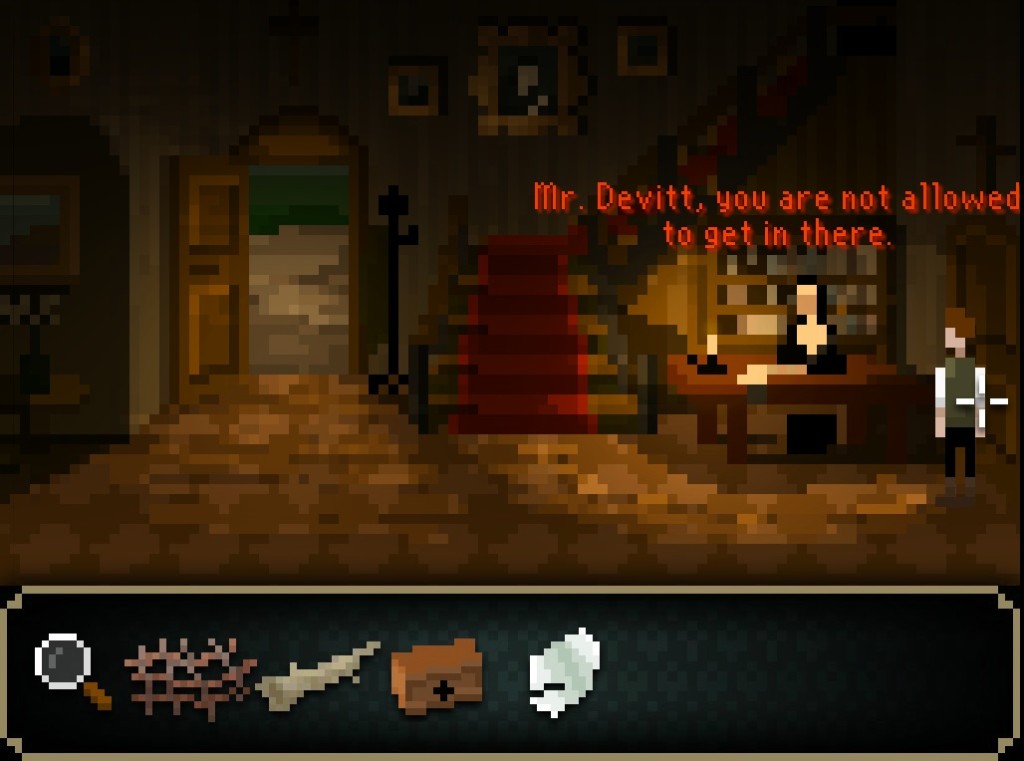 Happily, though, I have noticed some improvement in this area throughout chapters 3 and 4, so it’s possible the game just needs a little bit more time and funding to really come into its own in this respect. It’s worth mentioning at this point that other parts of the game have improved over the course of these first four chapters as well: later chapters show increased complexity, larger levels, and even more creepiness. With that in mind, I’m certainly looking forward to the next installment. 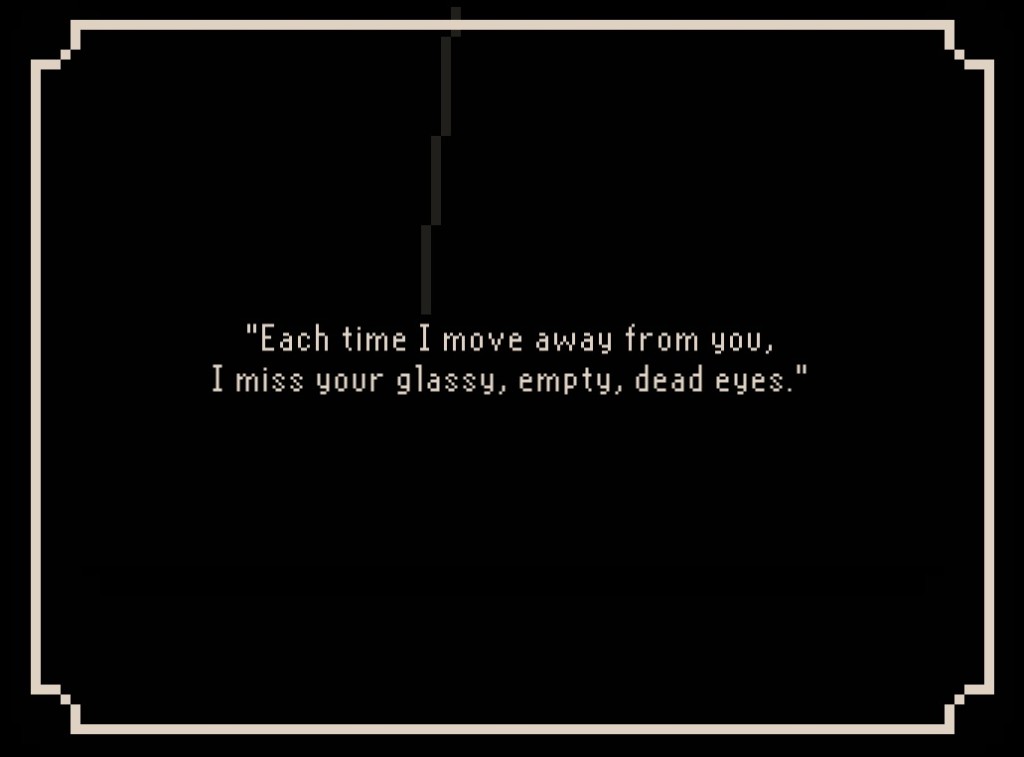 The Last Door is a good indie horror game that falls just short of greatness. It boasts absolutely wonderful music, a fantastic atmosphere, and gameplay that is worth casting aside any reservations about point-and-click games modern gamers may have. Where the game does fall short is in its writing; though the story is good enough to keep most fans of the unearthly and macabre playing, but the text that conveys it could be improved.

Overall, this game is definitely worth a look; any time you spend with it won’t be wasted. If it has caught your eye, I recommend playing it for yourself—and that’s doubly true for anyone who is a fan of horror games already.

As for the Collector’s Edition, the choice to buy it is very much an individual one at this point. Personally, I found the remastered sound to be quite an improvement, and enjoyed playing the four “minisodes” included as Extras. For the most part, the enhancements found in the Collector’s Edition will mainly interest those who enjoy the game already, so I recommend playing the first chapter on The Last Door official website before making the choice to purchase. Also, if The Last Door – Collector’s Edition is in your future, consider buying it on GOG or another site that offers the soundtrack as part of the package.

If you liked The Last Door, you might also enjoy: Ib and The White Chamber.

Now, I leave you with this trailer for the The Last Door – Collector’s Edition: