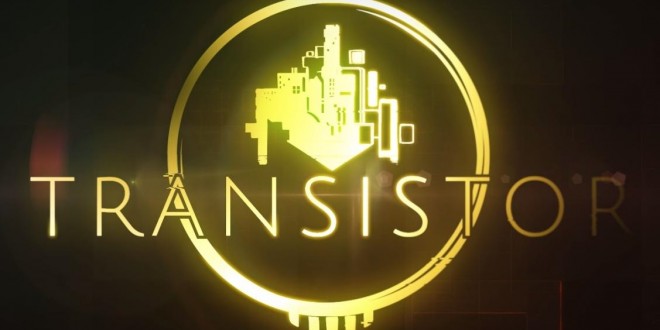 The Camerata is Watching: A Transistor Review

From the successful makers that brought us Bastion, Supergiant brings us their next major title, Transistor.

The world of Transistor is a beautiful, artistically rendered science-fiction universe where you play as Red, a singer who has had her voice stolen and is mentored by a USB-style, talking sword embedded with the soul of a lost close friend. From the start, the game throws you right into the middle of the action, where you obtain your sword, and leaves it up to you to put the pieces of a fractured story together. 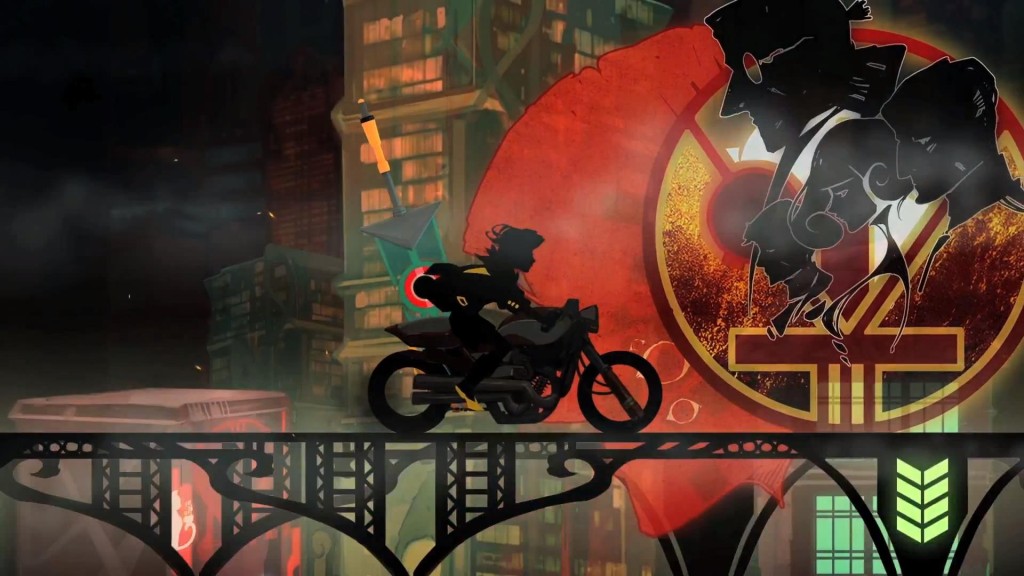 The city of Cloudbank has been taken over by mechanical creatures called the Process, which are led by shady individuals that form the Camerata. The sword you wield—the Transistor—has the ability to stop this invasion, however the Camerata have a diabolical scheme in store for the sword and Red’s voice. As you progress, you come across OVC terminals, computer terminals which contain reports, audio logs, surveys, and petitions to learn more about how the Camerata’s plan went amiss. It tastefully offers more tidbits of back story to those seeking more sense to the abstract narrative you’ve been thrown into. If things don’t make total sense by the end of it all, it could be because Supergiant wanted it to be that way.

Transistor’s immersive, action RPG combat mechanics force one to think quickly, but strategically. While the gameplay progression is a little linear and leaves you with few exploration options, you are allowed a little more leeway in the build of your character. You are armed with four weapon slots to install an array of Functions—which are essentially your attacks and souls of people that used to live in Cloudbank— that consists the familiar grenade, short, and long ranged attacks which can be carried out with a simple right-click. 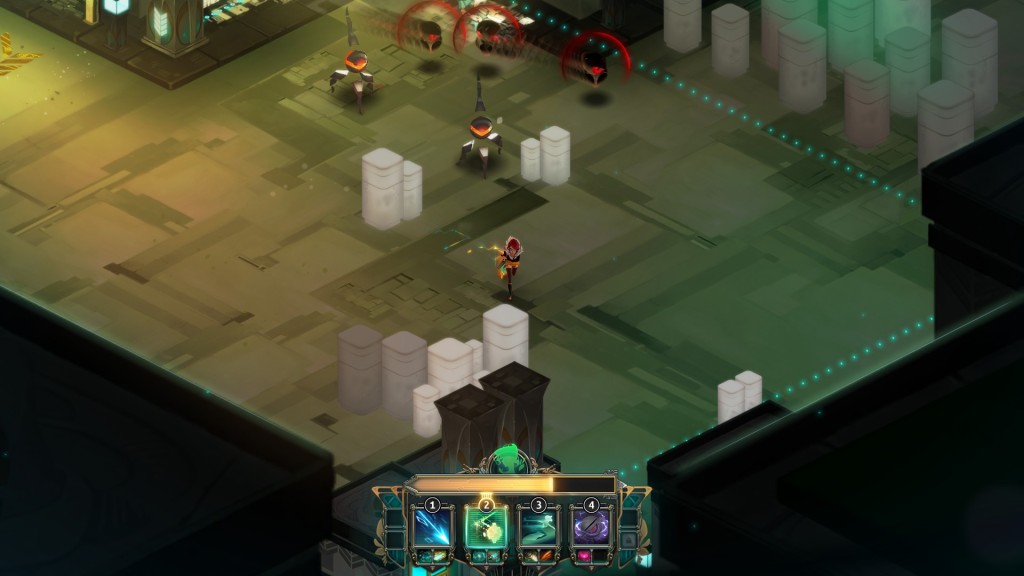 The twist is you are also given the power to stop time, an ability called “Turn()”, to plan out your abilities carefully and scope the battlefield with the spacebar. It even grants you the option to undo a move without discipline. Once your skills are lined up and set in motion, watching their execution is more than satisfying—especially in a matter of life and death. After every “Turn()” you are given time to recharge your stamina, which is depleted with every move and step you take during it. It would be considered wise to take cover behind the collapsible white columns, strategically placed through the combat zones, while you replenish. 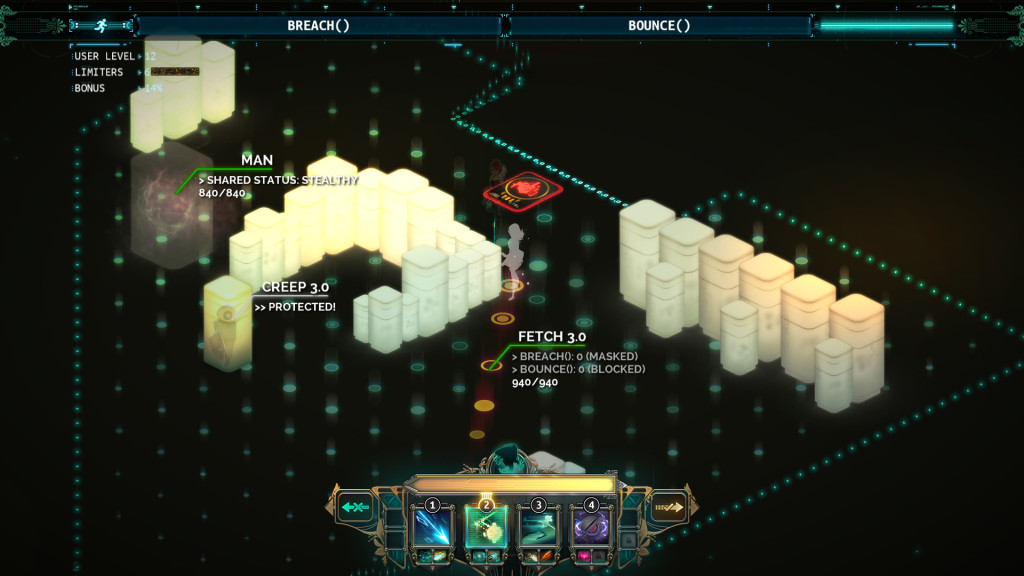 Every Function gained as you level up could be used to offensively or passively supplement another, giving its combat much depth and plenty of room for experimentation to suits one’s play-style. Once your health bar reaches zero, however, you are penalized by one of your abilities being taken away up until you reach a certain number of access points, or save points, to gain them back. This forces one to rethink their strategy and ability line-up until they have access to their favorite ones again.

Access Points are hubs in the game where you can save your progress, upgrade your abilities, fully respec your character, and add limiters. Limiters are the game’s balancing system, giving you the option to make combat more challenging, while rewarding you with an experience boost for your character. Would you rather have an enemy respawn again in a short amount of time after killing them, or would you rather limit access to more abilities if your health gets to zero? It’s very much like choosing your poison, but repays you if and when you succeed with each battle.

If you want to take a breather from the stressful technological world, you can go and sought after Back Doors. These are magical transports that take you to a beachside sandbox where you can listen to the game’s beautiful soundtrack, test your skill line up, and play through series of challenge rooms. 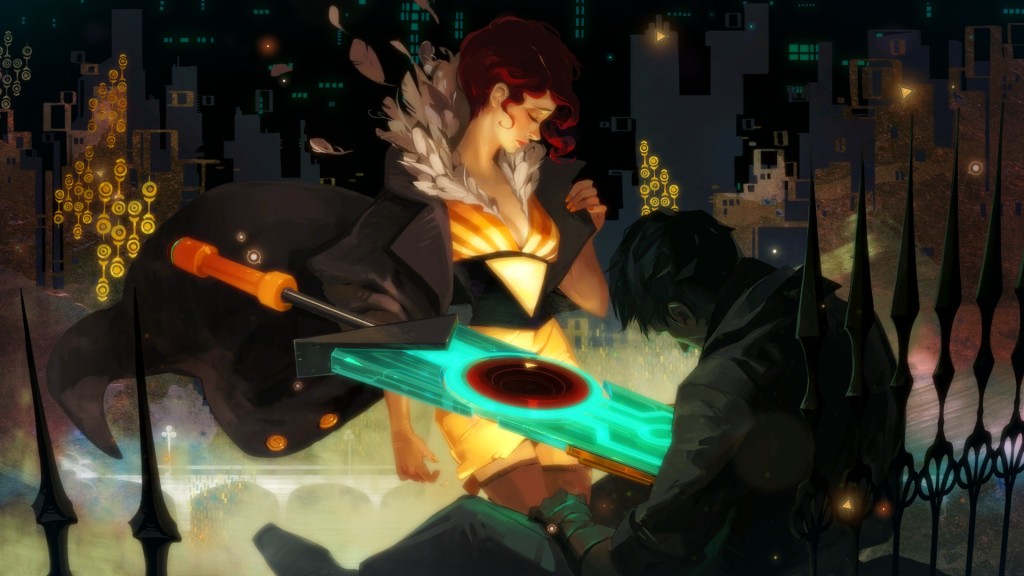 One the game’s biggest hooks for me is the beautifully crafted art style. Its painterly look is blended seamlessly with its lush technological environment. The colors are eye-catching and saturated, which does a great job on focusing where to look. Even the attention to detail was delightful, such as the sword being dragged along ground leaving a visual cybernetic trail, to the blissful humming of Red you can command during any song that’s being played. The subtle animation throughout the game was just enough to do it justice. What lacked in character animation during the dialogue filled cut-scenes was made up with atmospheric depth and one-click interaction.

The game isn’t prefect, though. The game’s classic isometric perspective camera angle sometimes causes foreground buildings and objects to obstruct player’s view, making it difficult to maneuver and see the battlefield during combat. The game could also use some sort of mapping system, aside from the visual cues, to show where you are in relation to the world. The campaign itself also isn’t very long, about six to seven hours, but does give you the option to replay the game without resetting you back to level one or taking your abilities away.

Coming from someone who has had little chance to play Bastion, overall Transistor was new and exhilarating. The story left you with wanting to put the pieces together, and a story that is riveting and bitter-sweet. The combat forced me to really think about my next moves carefully against each enemy I came in contact with. Limiters were the bane of my existence, but the bonus in experience boost was too tasty for me to pass up on and gave me some sense of accomplishment. The aesthetic was everything I could ever want in a video game—especially as an artist. It doesn’t fall short in its exciting combat, creative artistic style and narrative storytelling. It is complex and complicated in the most charming way, and its soundtrack and classic anime appeal is entrancingly captivating.

I'm a freelance Animator & Illustrator, who is also an avid video game enthusiast. Graduating from the Academy of Art University in San Francisco with a BFA in Animation and Visual Effects, it would come to no surprise that I like to spend my free time illustrating and playing video games.