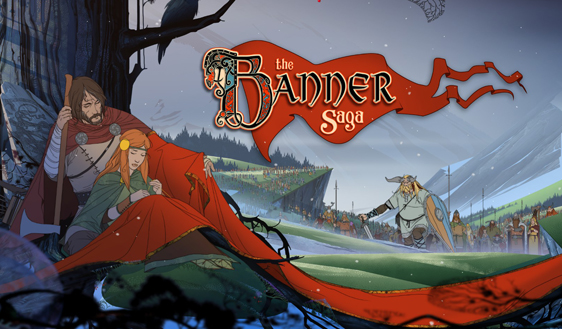 The Gods are dead. It is this bleak message which welcomes you to the world of The Banner Saga. This one simple phrase intentionally and effectively sets the tone for the adventure to follow. It truly shines in its ability to intertwine story and gameplay mechanics to provide a memorable tale of survival and consequence. True to what an RPG is, or at least used to be,  choice is the central aspect of this title in both combat and story. Between its breathtaking hand-drawn art and unique melding of classics, this title is worth every bit of your time but may lack in wide appeal due to many unorthodox mechanics.

Let’s go ahead and get it out of the way – The Banner Saga is a gorgeous game. So much so that it’s almost a moot point to even discuss. Water is wet and The Banner Saga looks magnificent. The art alone is sure to raise the standard of what a small team with ambition can achieve. Its vintage Disney and Eyvind Earle art style is brimming with detail and polish which is sure to prompt an emotional response from the player, be it nostalgia or awe. In our case it was both.

The story will continually batter on your very soul ‘till the end of its multi-perspective narrative. The Banner Saga puts you in charge of survivors in a sunless, dying world filling with murderous creatures known only as the Dredge. As you and your followers seek asylum along the road you will be met with choices which can and will cost the lives of others, furthering the sense of despair the story conveys brilliantly. You will try to manage supplies for your caravan while maintaining your party’s items and stats with limited resources. 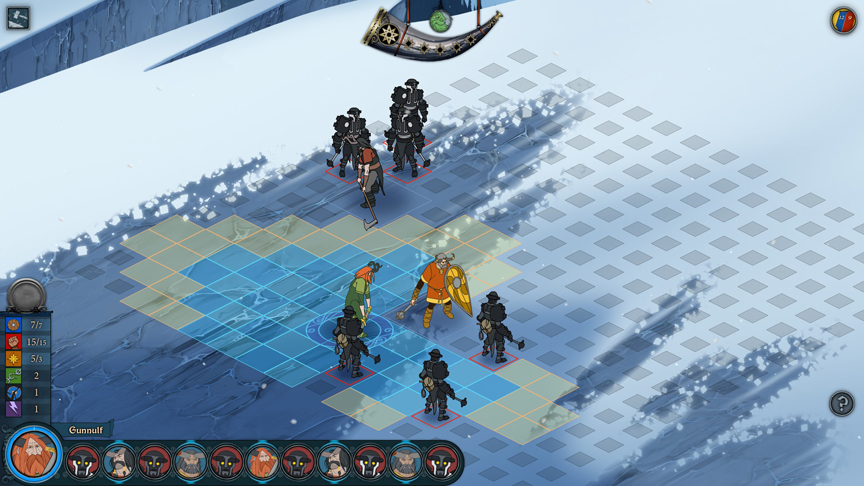 Combat is a tactical rpg at its core, and while takes many unique approaches, it does fall short in some aspects. The central theme of choice is represented on this level as you’re divided between attacking opponents armor or strength. Obviously chipping away at armor will yield deadly attacks later on but with an interesting twist, character’s health and strength are one in the same. This simple yet brilliant idea adds a layer of depth unseen in most rpgs and adds a layer of choice to what’s is usually considered pretty straightforward.

The pace of the combat is what you’d expect from a game of chess as each team moves one character in per turn. However, unlike chess, move order is designated prior to battle giving the opportunity for strategic planning before the battle begins. A few other unique ideas come in the form of willpower and exertion. Willpower is a valuable resource which allows characters to move farther or hit harder on the battlefield. The amount of willpower you can use per turn is dictated by the exertion stat. While finite, willpower can be redeemed in battle by defeating enemies. These idea’s are bold and refreshing, as it’s rare to see an rpg break away from the standard formula.

While combat is deep and effective, there are certain staples of tactical rpgs absent. Character direction has no impact on combat nor will you see any obstacles in the environment or changes in topography. While the environments themselves look amazing, they are all simply flat open grids. We’re somewhat torn on whether or not this intended or simply overlooked, but it is worth noting that Factions, the multiplayer standalone, does in fact feature some environmental variables like smoldering coals. As such, it makes us wonder if Stoic had planned on adding these aspects to the single player, but opted not to due to AI behavior and pathing; but we’re simply speculating here. Nevertheless combat is really enjoyable, although due to a low number of character classes, it can get somewhat repetitive by the end.

(Caption left blank intentionally as no synonym of the word beautiful was adequate.)

Outside of combat your caravans trudge through varying environments and dire situations. Along the way you will be prompted for a variety of choices which affect the rest of the title in a meaningful manner. Choices can yield renown, the games sole currency which is used for everything from buying items, upgrading characters and buying supplies. We love this aspect as it further drives the overall theme of choice here as well. Do you buy supplies to feed everyone, level up party members or grab some items to equip? It’s worth noting that all three are equally important so choose wisely.

The Banner Saga solely utilizes the mouse for every action. The user interface is every bit as gorgeous as the rest of the title. Menu clicks are crisp and effective across the board and the sound effects are something you’d expect from a larger studio. A really interesting aspect is the music in this title, or more specifically, the lack thereof. Obviously combat is an orchestral affair, but most of the game has a purposeful silence to it with only minimal environmental ambiance. It’s rare for a title to be lauded for a lack of in game music, but here it’s noteworthy as it’s deliberate absence is effective for the central story.

Even with a streamlined interface which lends itself amazingly well to touchscreen devices, the developers have explicitly stated that they have no plans on porting to mobile. This is an odd choice as the titles text based story and intuitive click-only interface would be right at home on a tablet. Luckily for us, unexpected low system requirements allowed us to experience it on any full Windows tablet flawlessly. Seriously, it seems this game could run on almost anything.

Even if many of the aspects of The Banner Saga are usually reserved for the hardcore gamer, it’s effective blending of mechanics give this game a broader appeal which we foresee turning gamers on to similar titles. It is one thing to be an acquired taste, but is another story entirely when a title gives a an unacquainted gamer a taste for more.