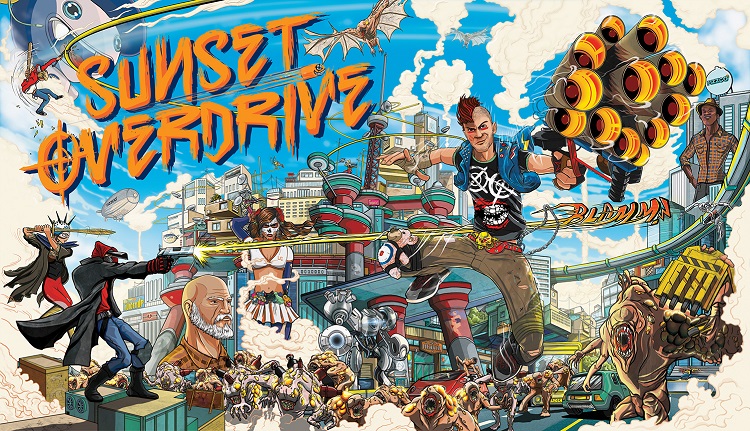 Console or PC exclusives are always fun to get your hands on. There is just something about an exclusive that breeds more excitement. For me, I feel that these titles are held to a higher standard. They’re the types of games that can sell a system. God of War, Halo, World of Warcraft, The Legend of Zelda, are all examples of big name titles that have their own exclusive platforms, and I’ll be honest in saying that I have purchased a system once or twice just to get my hands on a particular release.

Microsoft’s latest attempt to cash in on the craze is Sunset Overdrive, a high-octane adventure created by Insomniac Games, the creative minds behind previous hits like Ratchet and Clank, Resistance, and Spyro the Dragon. Sunset Overdrive is best classified as a, fast-paced, over-the-top, arcade shooter. There are many influences from Ratchet and Clank that bleed into this release, including a wide array of outlandish weapons, and some humorous dialogue. But a great reference doesn’t necessarily equate to a stellar exclusive. 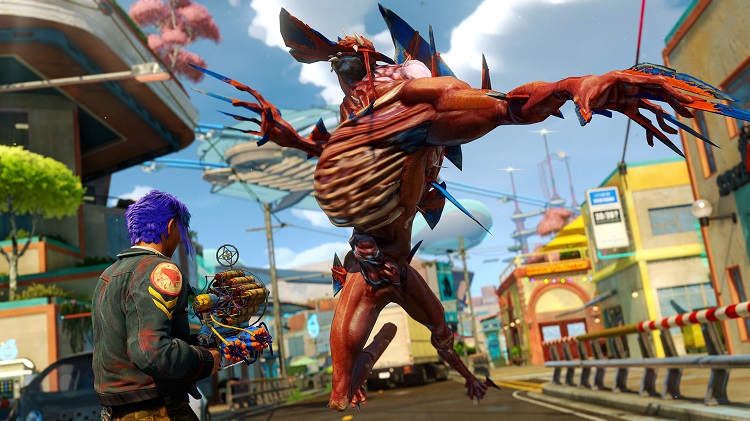 Sunset Overdrive is every bit as zany and outwardly colorful as Insomniac’s previous releases. Everything is crafted in a wild, comical, cel-shaded style. The characters themselves emanate a cartoony vibe, and their body types range from lanky like a pole, to over-exaggerated and muscular. It may take place in a “modern day” city, but I am visually reminded of titles like Ratchet and Clank, Jax and Daxter, and Sly Cooper. Most of the enemies follow a main theme, meant to look like deformed humans who were metamorphosed by dangerous chemicals. These zombie-like beings climb, leap, and run like animals as they seek out a certain energy drink to get their biological “fix.” This cataclysmic event has caused the city to dive-bomb into utter physical chaos. Buildings are left crumbling, vehicles and transportation systems are left abandoned, and a series of explosions have cast the environment into tatters.

But don’t let Sunset Overdrive’s kiddish appearance fool you. This title is very much mature in is execution and is laced with a variety of physical and verbal gags that are very adult in nature. Ranging from kangaroo head cod pieces, to a series of F-bombs, to a massive amount of comical and often cliche characters, this title is as far from kid-friendly as it possibly can be. The end result is a series of crude jokes and slapstick comedy that will leave you with more than a few laughs. This was perhaps my favorite part of this title. The writing and voice acting were superb, and not a single moment goes by in this release when you’re consumed by any amount of seriousness. Even in death, the comedy continues unencumbered. I recall situations in which I would fall from a high ledge, and instead of simply perishing, a portal would open up and start me back at the beginning of the level. Or times when I would fast travel to a location, only to see my character consume an entire bottle of alcohol and pass out in a ragdoll animation on the side of the street. 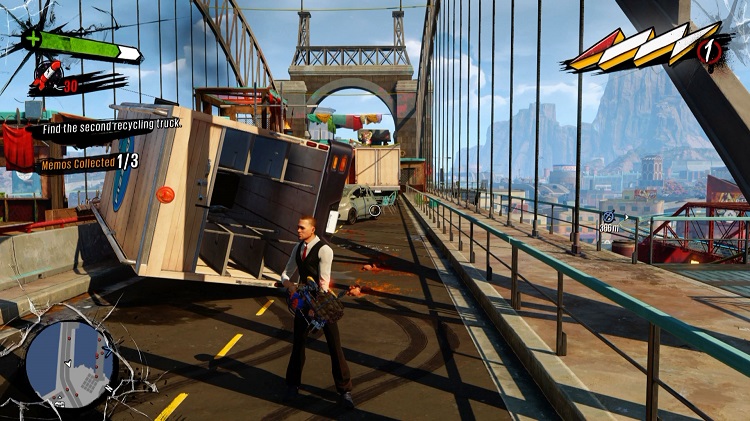 Unfortunately, even though the game has excellent writing and some very entertaining graphical elements, the combat system leaves much to be desired. Now don’t get me wrong, the shooting and grinding system is unique, and it makes for a very destructive and compelling experience. The issue is that the entertainment factor is short lived. Once you’ve played the game for around an hour, you’ve played the entire game in terms of combat.

You’ll receive new weapons and upgrades, which help to shape the gameplay a little bit, but for the most part you’ll be grinding, flipping, and shooting enemies on the run. It gets old fast, but fortunately the progressive story, the comedic characters, the plot twists, and the unlockables, should be enough to get you to the end of the title. The multiplayer doesn’t necessarily offer anything to increase replayability though. It’s a cooperative system where you band together with a team of peers online and make your way through a variety of missions. The downside is that it loses its luster about as quickly as the single-player does. 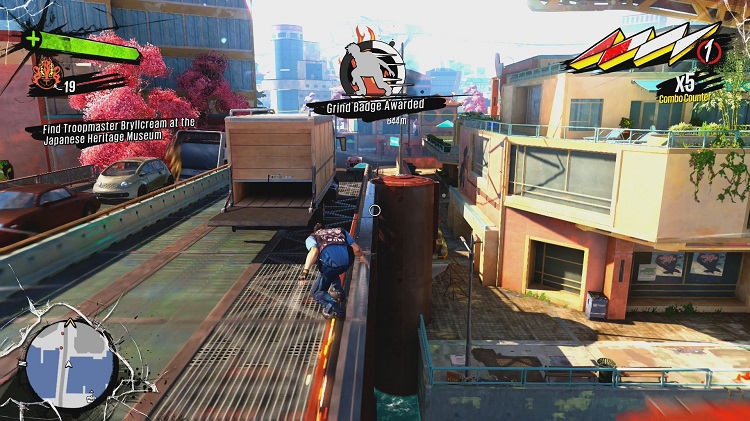 This game is a tough nut to crack, and could go both ways in terms of enjoyability factor. For some of you, this could be an instant cult classic, and something you’ll find yourself playing for months on end. For others, it’s simply a rental that will give you some hearty laughs. This is simply one of those titles that is adored my some and hated by others. For that reason, I would recommend renting this release first, to get a good grip on where it stands with you.