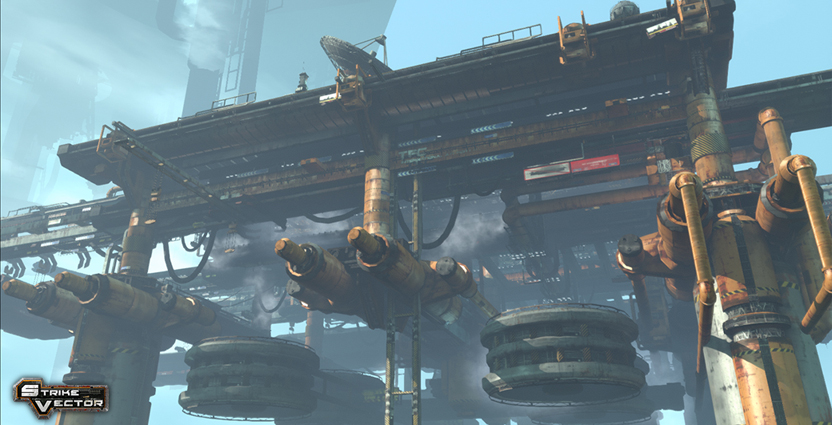 Arena shooters have been seen in far less numerous quantities in the recent years. The old-school model has since been replaced by the likes of many F2P titles like War Thunder or Hawken. Even AAA shooters have gone the COD or Battlefield route of defined progression through online multiplayer battles. Leave it up to the indies to give us what we really want.

Strilke Vector puts you into the cockpit of a vector, a mechanized transforming vehicle which alternates between a jet and hover mode in an online multiplayer focused game. The title draws influence from titles like Quake Arena and Unreal Tournament in both its presentation and content, but with air to air dogfights similar to Crimson Sky. Even with its roots heavily embedded into the old-school it still finds ways to offer a fresh experience while avoiding many of the pitfalls that befall similar titles.

Graphically speaking it’s somewhat of an oddity. In-game the title runs smooth and the vectors and environments look great but the main menu system lacks the same polish. This is obviously a very minor gripe, but it’s worth noting that Antonio de Saintex is our hero.

The “tutorial” is nothing more than a few slides containing text and screenshots on how to play with the offer to fly solo around any map. Having played our share of long drawn out tutorials, it’s actually a nice change of pace to be able to hop right in for a few moments before heading online without having to being prompted on how use WASD.

Flight is mouse controlled with the keyboard available for alternate functions like special abilities, barrel rolls, speed boosts as well as the transform command. We love the fact Ragequit has completely skipped resource management in favor of cooldowns. In fact the only item’s strewn throughout the map are health and cooldown boosts. One interesting twist is the appearance of drones which carry defensive or offensive boosts, but first players must destroy them and then fight amongst themselves over the bounty. 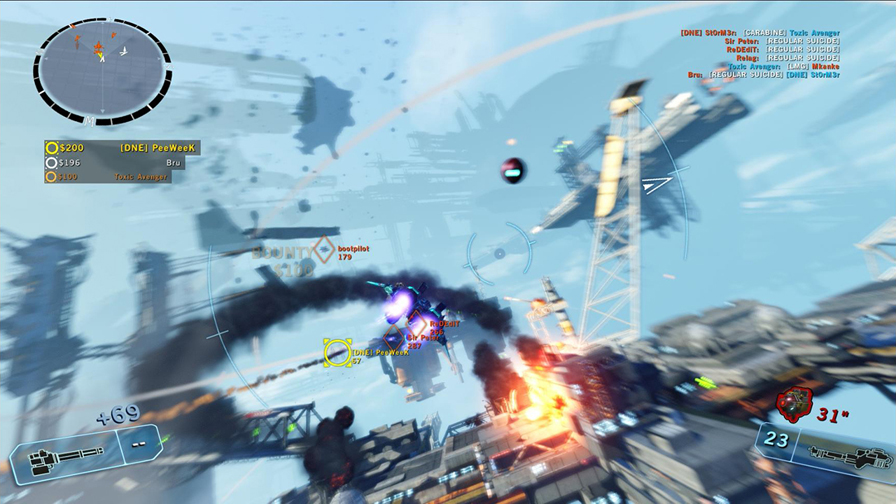 The normal vector’s speed felt a little sluggish which caused a severe overuse of the hilariously translated “post-combustion” button. While there is no limit to your after-burner, its use makes you highly visible to enemy radar. Hover Mode allows you to literally stop on a dime, zoom, take a few shots and then blast off again. This ability is great for picking off targets, but also allows you to change direction very quickly or to use small nooks for cover. While you do have some mobility in hover mode, oddly enough there is no way to move you ship forward. Many times we found ourselves inches away from a health boost or cooldown, unable to move the few feet forward without switching back to jet mode or circle-strafing. It’s worth noting that collisions with the environment can be very unforgiving and the slighted bump can set you ablaze if you’re low on health.

The game sports only a few different gameplay modes and only eight maps out the gate with the promise of new content on a regular basis. For free! In fact Ragequit is already boasting new content February 28th. We’re looking forward to see what we’ll see next month as we’re already itching for some new arenas.

Completed online matches yield experience points which unlock cosmetic-only items like player banners, ship decals and new vector parts to mix and match. Even though the game features unlockable ship designs, they are all essentially skins and have no effect on speed, armor or mobility. Instead all stat affecting items are available to you the moment you boot the game up.

Two weapons are chosen at loadout from eight and remain until the player decides to change. Players can choose to respawn or change their loadout before the match and respawn. Besides the usual weapon fare like rocket launchers and plasma cannons seen in games like Unreal, it features passive specializations like increased armor or speed and active special abilities like cloaking fields and mines which allow you to counter opponents own configurations. 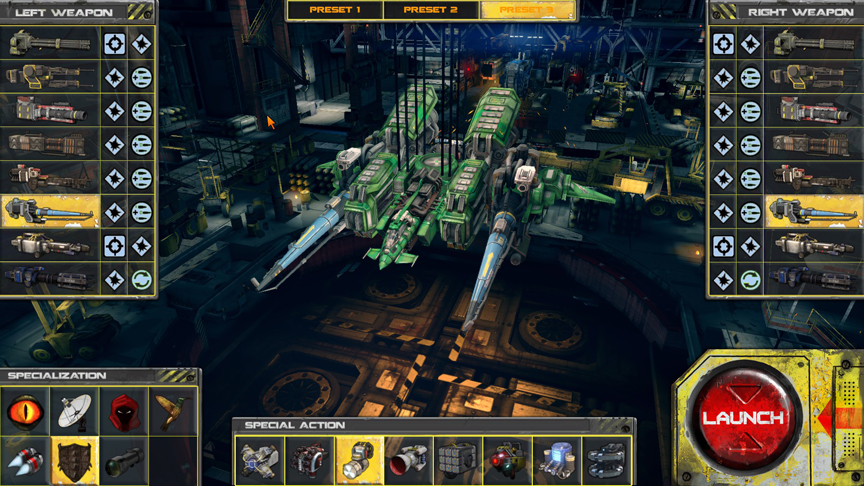 It’s rare these days to see a game with a price tag that features only online multiplayer battles. Most make up for this with in-game cash shops and never ending grinds. Oddly enough Ragequit decided to put a $25 price tag with a promise of free DLC and updates for the life of the title. Even though we’ve experienced some connection issues and a few bugs, we have to remember that this entire game is coming from a team of less than a dozen people so while our criticisms are not unfounded, they are assuredly within the realm of reason.

We love the old-school Quake Area style weapons along with some new more aerial suited ones like homing missiles. There are plasma cannons and the old-school rocket launcher for those with precision aiming skills as well as plenty of homing missiles for the rest of us. At first we thought these had to be extremely overpowered, however each player can select a variety of countermeasures like shields or cloaking which means even if someone has a solid lock on you, there’s still hope.

Overall the reasonable price tag, intuitive gameplay and a unique spin on classics is worth every bit of your time. Since it is neither your conventional FPS or dog fighter it does have somewhat of a learning curve. We should mention multiplayer battles lack any sort of music, so you’ll have to bring your own. However,  the lack of a grind for in-game content gives the title a “pick-up and play” appeal as all players are on a level playing field regardless of time spent in-game. The only difference between you and your opponents is skill outfitting and piloting a vector.