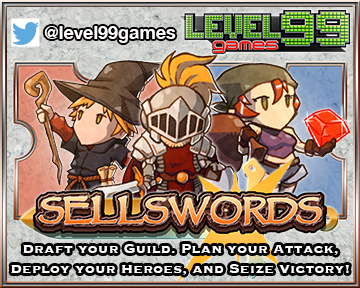 Here at Thumbthrone, we embrace all forms of gaming, and are proud to introduce the first in our new series covering board games with Sellswords, a tactical card game for two that pits randomized mercenary units against each other in an attempt to control territory in a Norse-inspired world.

It’s a simple game on its outset, inspired heavily by the classic minigame included in Final Fantasy VIII, Triple Triad. Each Sellsword is a card with a number on each side of its four edges. A card can be played in any orientation, so long as it’s adjacent to another card. When a card is placed against an enemy card (each card’s face is identical, save for the color, to determine which player controls the card), the numbers are compared, and if your card has a higher number, the enemy is flipped to your color. Consider the following example: 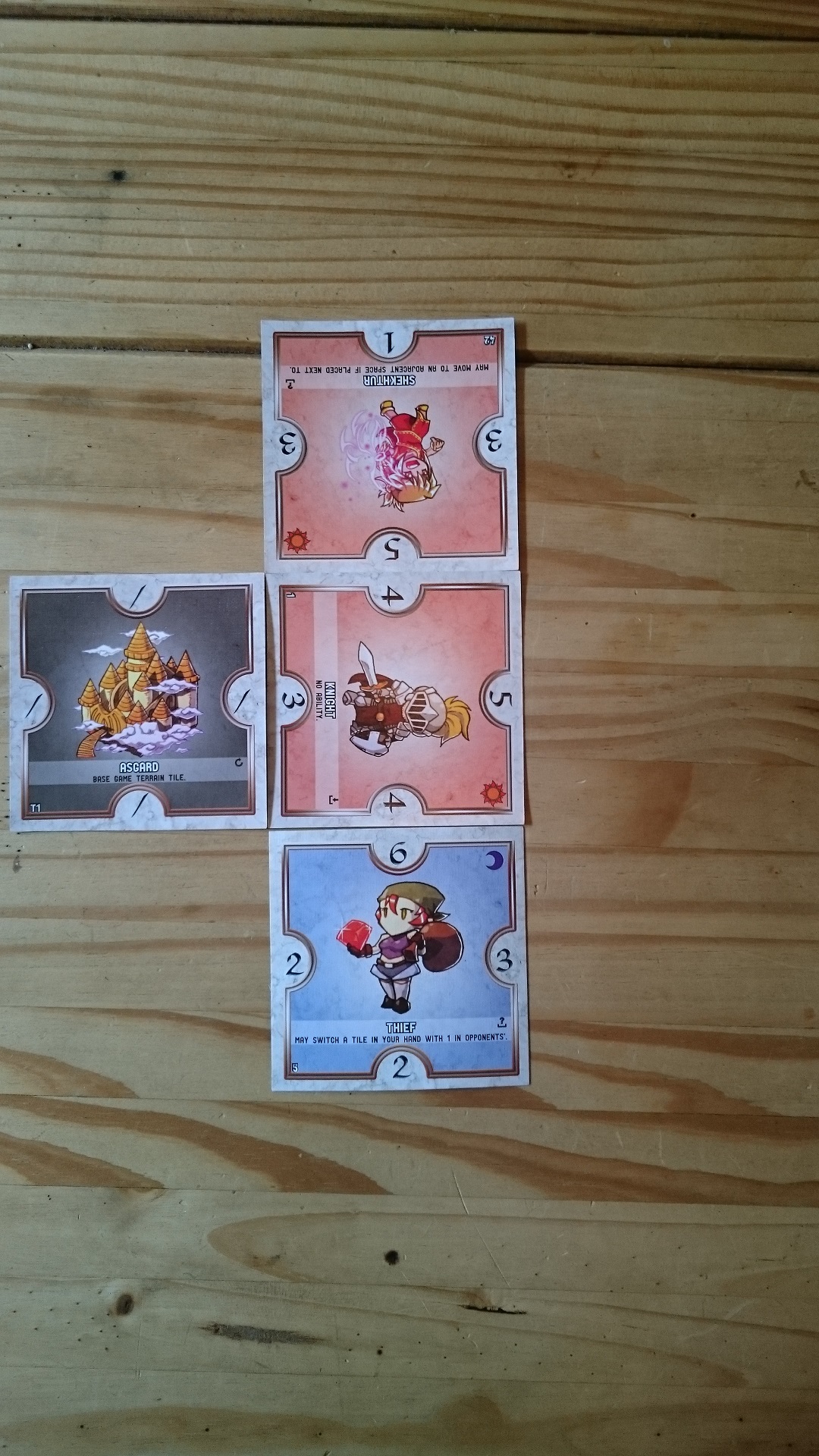 If the next turn were the blue player’s, you might consider taking the Knight, preventing the other player from taking it by standard means. You could do so like this: 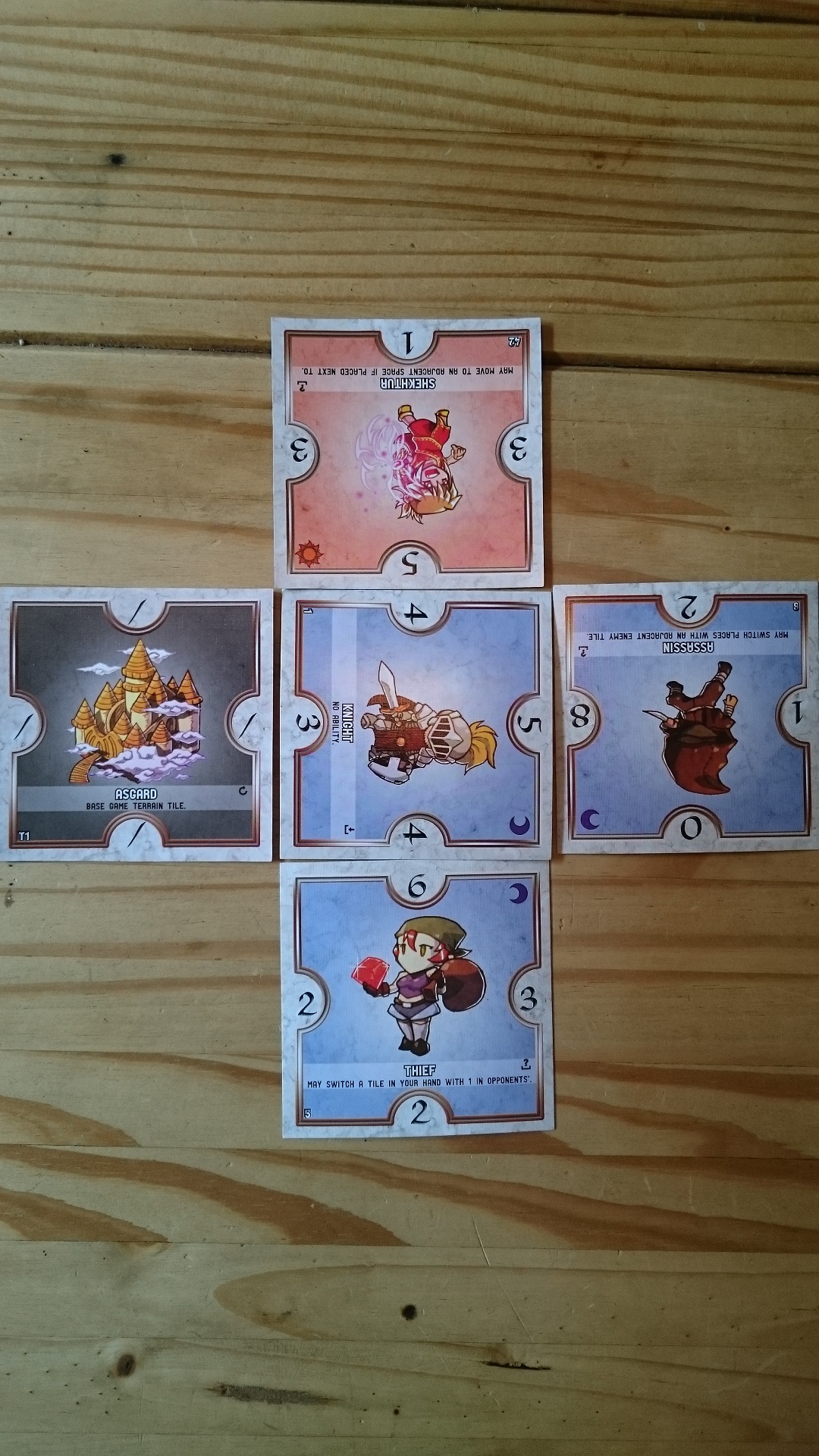 The Assassin forgoes the use of its ability to use a high number to take the Knight. Obviously, the Assassin is now very exposed, with three low numbers available to capture the card. Of course, since several faces of the card are weak, it might be traded several times.

Where the game starts to get more complicated comes with each card’s unique ability. Aside from having an assortment of different values on each card, each can affect the game in a wide variety of ways. These abilities can be mandatory upon placement, optional, continuously in effect, or only affect the end of the round scoring.

The Knight, for example, has fairly strong numbers on all sides, but no special ability. The Titan has all 0’s and can’t flip any other cards, but cannot be flipped by any other means. Some cards like the Archer, the Mage, or Rukyuk can compare with tiles that aren’t adjacent, but further away—allowing you to flip cards that might have been considered safe since they were surrounded. Some cards are stronger when compared against, or become weaker as they’re surrounded. Still others can shift cards that are placed to create powerful placement opportunities, or rotate other cards to expose weaknesses. Using the above example, the red player then takes a less standard method to retake the Knight: 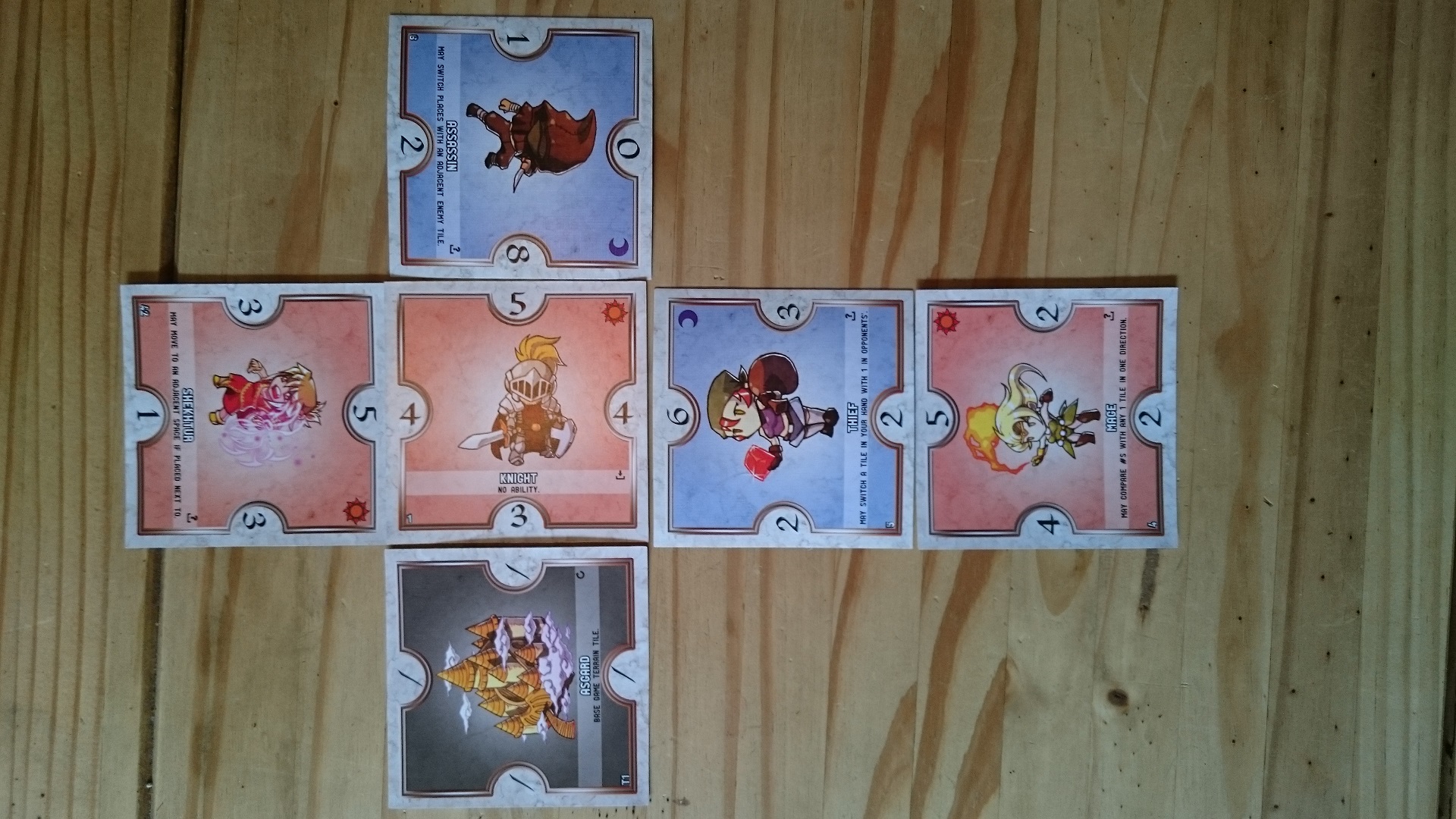 In this case using the Mage to bypass the Thief and compare with the Knight without being placed adjacent.

The game begins with the placement of a terrain tile, which establishes a global rule for the game. Asgard is a basic land tile, imposing no rules. Nifleheim causes flipped cards to compare their numbers again, so you can chain massive flips together. Ragnarök clears six tiles after the first round, and Yggdrasil only plays one round, but instead of dealing out cards, you look at the top two cards of the deck and play one, discarding the other.

It’s as important in Sellswords to flip as many cards as possible to your side as it is to try to engineer yourself a hand with cards that support each other and can counteract your opponent’s moves. The game is a stream of usurped expectations. And much like a good game of chess, you’re best served by anticipating all of your foe’s plays and planning every contingency.

When twelve Sellswords have been placed, the number of cards of your color in each row and column is counted and (two cards yields one point, three gives two, four is worth four points, and a full five cards grants seven points). Twelve more are dealt out and another round continues on the existing field.

And it’s really that simple. For those moving from video gaming into the tabletop or board game space might consider this one of your best gateways. It can be easily learned in just a few minutes, isn’t particularly time-intensive (a game can be finished in twenty minutes or so), and doesn’t require loads of players—you only need one other player. 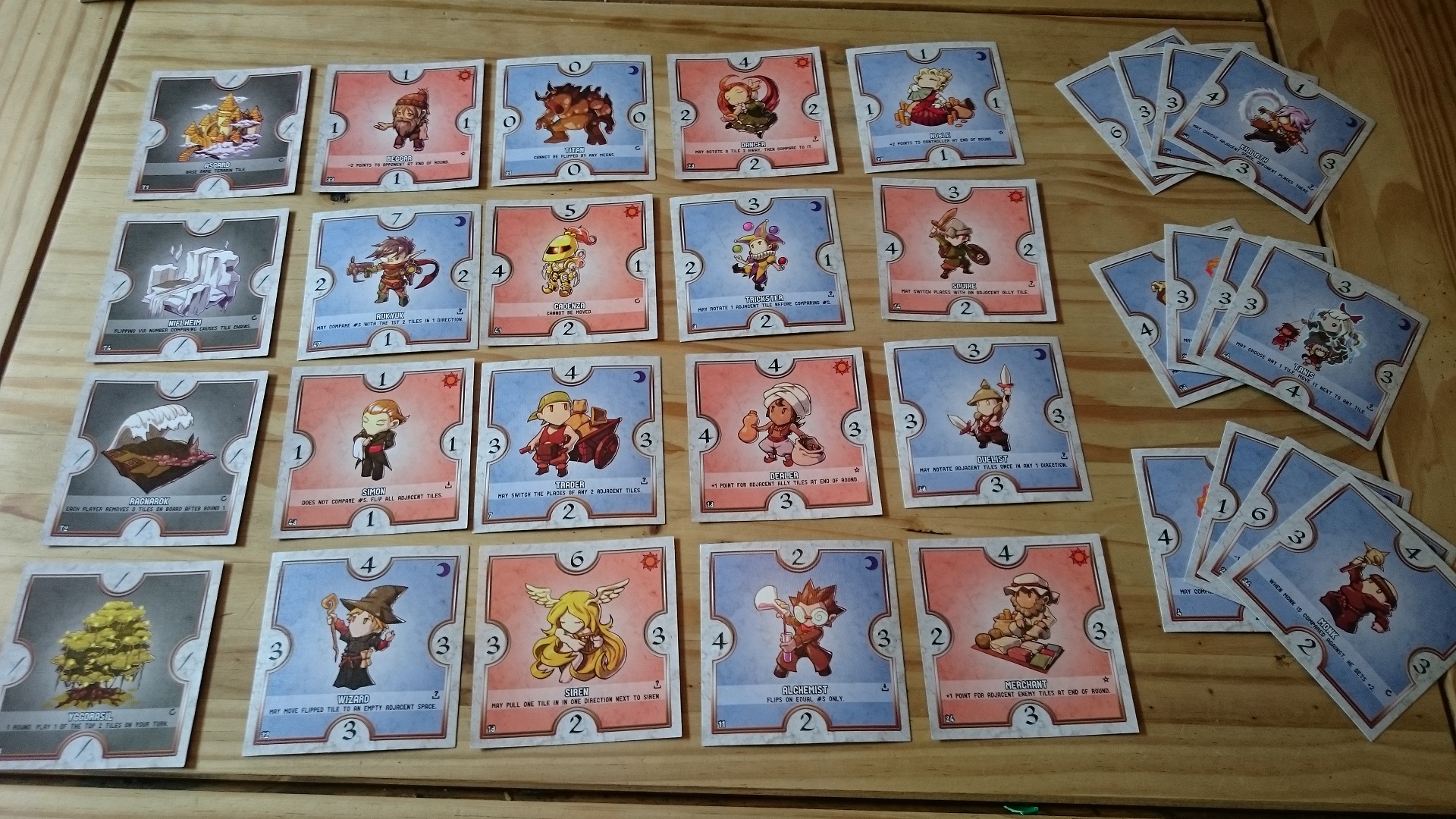 The game is quite portable, as well: there’s no mat or board to play on, just the rule sheet, four terrain tiles, and about forty character cards. I had successful play sessions on dining room tables, floors, parts of a chaise lounge, and even the table at a bar with little issue. The whole box when packed up is maybe 4 x 6 x 1, it fits in a cargo pocket or literally any part of a backpack ever—a good supplement for those get-togethers where there might be a group of more experienced gamers playing something like Settlers of Catan or Cosmic Encounter, and leaves some love for a few people that might not be able to include themselves in the larger game or is just getting started.

The cards are printed on a nice, thick stock, and the box is rather solid—since there’s no board nor any complex models, build quality isn’t really an overall issue. The artwork by Fabio Fontes really clinches the game together, though. The artwork is simple and immediately evocative of a good old NIS game or something like Final Fantasy Tactics, but with a little more whimsy.

The game also dodges the other major barrier of entry for many other board games by sporting a $20 price tag. The game is immensely accessible in that regard. Easy to acquire, easy on the wallet, easy to set up, easy to play, but still sports complexity in its random elements. Even if you’re a diehard board game player, it feels good to be able to play a simpler game at times—something less resource intensive for those times when you just can’t commit to an entire Risk game. Definitely something to consider.

Be sure to check out Sellswords and other Level 99 Games over at their website.