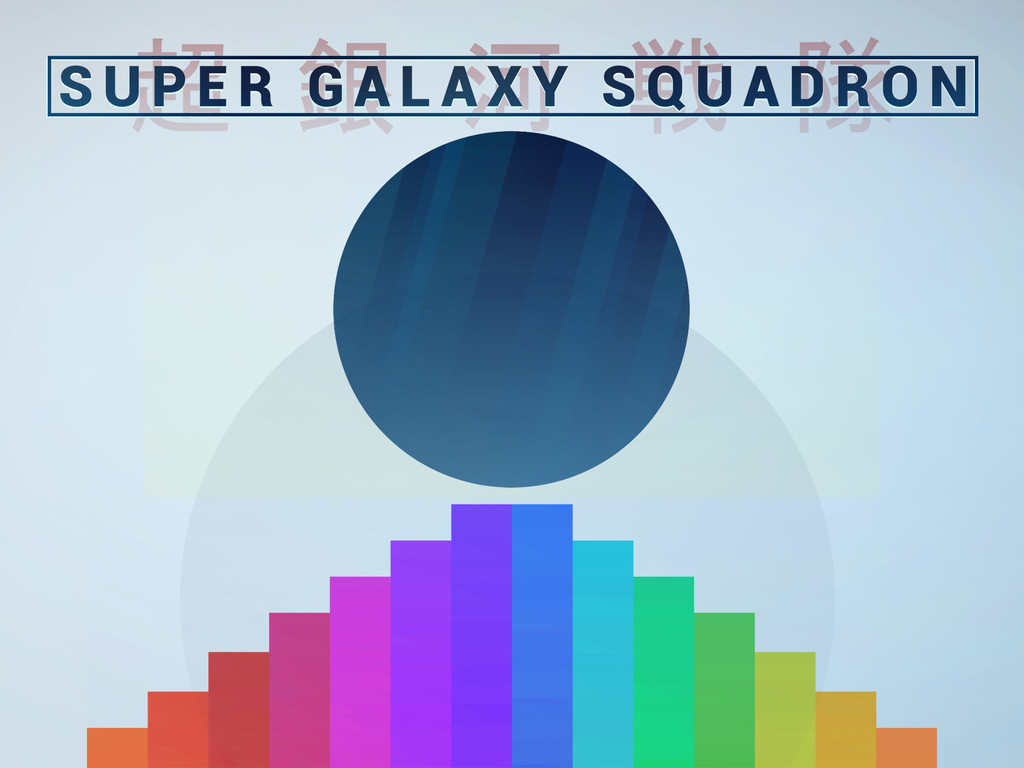 ’90s kids like myself have long enjoyed the arcade SHMUP.

For those unfamiliar with the term, it’s analogous with the “bullet hell” title, you play as a single entity—often a fighter jet, plane, or spaceship—and engage in combat with hundreds if not thousands of foes with little but your trusty guns to keep yourself afloat.

It’s a genre that was predominantly created and refined by Japanese game companies—Namco’s Galaxian often being named as the forerunner of the genre as a whole, with Konami’s Gradius being quite possibly the most iconic entry in the genre, and is considered by many to be the game (or series) that has had the most profound effect on the genre as a whole.

Since gaming culture has shifted in such a Western direction, the genre has become noticeably more niche. There was a sort of split, into the “bullet hell” hyper-difficult subset with games like Ikaruga and many games that reside exclusively in Japan, and more “Cute ’em ups” like the more recent Deathsmiles.

Still, the genre evokes many of the same qualities that attract players to the more mainstream modern action games: you’re still alone against immeasurable odds. You get stronger as you go along, collecting powerups to soup up your weapons and trouncing utterly massive bosses. It’s strange that these game aren’t more popular. If you haven’t played one lately, I don’t blame you—outside of some loosely related games that have risen to prominence (Sine Mora, Everyday Shooter, or RESOGUN come to mind), it remains a largely unappreciated genre. If you’re interested at all, though, I’ve got a way to justify your entrance: Super Galaxy Squadron. 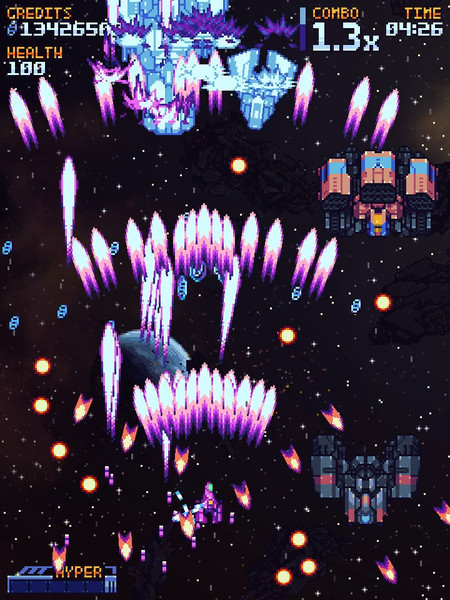 It was a release without fanfare. Launched as a Kickstarter project by Psyche Studio last year, the game asked for a paltry $200 to finish their game, and crushed that goal handily, raising just over $1200, and then fell off the map a bit.

It’s not a huge undertaking. The game isn’t some roaring, fully-voiced epic with branching pathways, morality systems, complex NPC interactions, or any of that drivel. It’s a pure experience, one that brings the SHMUP genre into the hands of the everyman gamer by not allowing genre traditions to make what many feel to be an unfair and punishing genre (despite this also being the group that love games like Dark Souls, go figure).

The gameplay is the star here, there’s little-to-no story to come between you and the myriad alien forces that stretch before you. It’s the year 2371, and humanity is going back to war with the aliens hailing from the Tau Ceti star system. That’s really all you need to know. Story done. 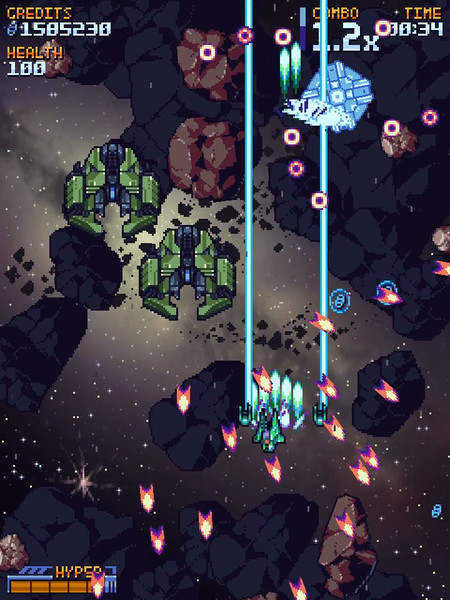 The real meat comes in selecting a ship/pilot and engaging your enemies with as much malice as possible. There are fourteen ships to choose from, each with unique stats and their own little hooks. The ships feature basic power, rate-of-fire, armor, and agility stats. Each ship has a primary, secondary, and hyper weapon—the latter two of which are what really set each ship apart.

The primary weapons on each ship function essentially as a rapid-fire machine gun, and is your primary mode of dealing death. It varies per ship, but not by much. Each starts by firing two side-by-side bolts forward, and can be upgraded seven times. Some ships will have their primary weapons spread out to fire at steeper angles on the sides to allow for engagement without being directly in front of your targets, while others will concentrate their damage directly ahead, requiring more movement, but quicker kills once a target is in line-of-sight. The rate-of-fire of this can also be upgraded five times to multiply your damage output.

Your secondary is a more defining element of your ship. One ship features fire-and-forget missiles that eventually upgrade into heat-seeking rockets. Another flings discs of energy that arc to each side, dealing heavy damage in a small radius. Another produces constant low-damage lasers that pierce enemies and cut wide swaths across the screen. Others have close-range, high-damage weapons that require riskier maneuvers to maximize damage. 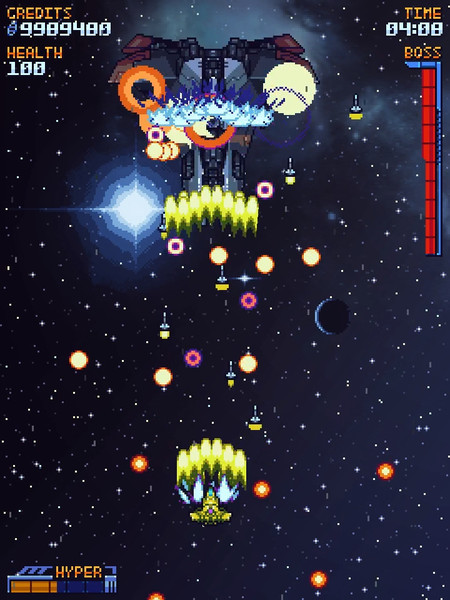 Each enemy you kill drops credits, which function not only as your score, but charge your hyper meter. When full, you can unleash a powerful weapon that fits in with each ship’s archetype, and is closely related to your secondary weapon. The fire-and-forget rockets can be supplemented with a Atom Missile that travels a short distance and deals heavy damage in a large radius. The constant-damage lasers can be fired in a full 360 degree arc around your ship. If there are any balance issues present in the game at all, I find the hyper weapons to be the worst of the bunch. Some are clearly more useful than others—those that erase enemy projectiles specifically—while others just don’t project enough damage to warrant use. To that end, there are some ships that will likely see little or no use.

I had mentioned that the game intended to do away with a few of the hallmark characteristics of SHMUPs that have driven it into such a niche part of the gaming market. It’s an unforgiving style of game, tasking you with avoiding hundreds of projectiles simultaneously, and mistakes have a tendency to set off a chain reaction that drives you into corners where you cannot escape without damage. The kicker? In most games like this, one hit is certain death.

Super Galaxy Squadron does away with that bit by bringing back an existing, though less prevalent, old mechanic in the form of Armor (the ever-popular U.N. Squadron for SNES featured a similar somewhat similar system). No bells or whistles on this, though, your armor functions as a health bar, allowing you to make some errors here and there without immediately losing your progress. Hits from smaller projectiles or grazes will subtract from the bar with no ill effects, while many small hits in a short period or being struck with anything more substantial on the main body of your ship will result in a more severe drop in armor, as well as the loss of one of your powerups—which you can either ignore and flee to safety, or risk trying to recover to keep yourself as powerful as possible. 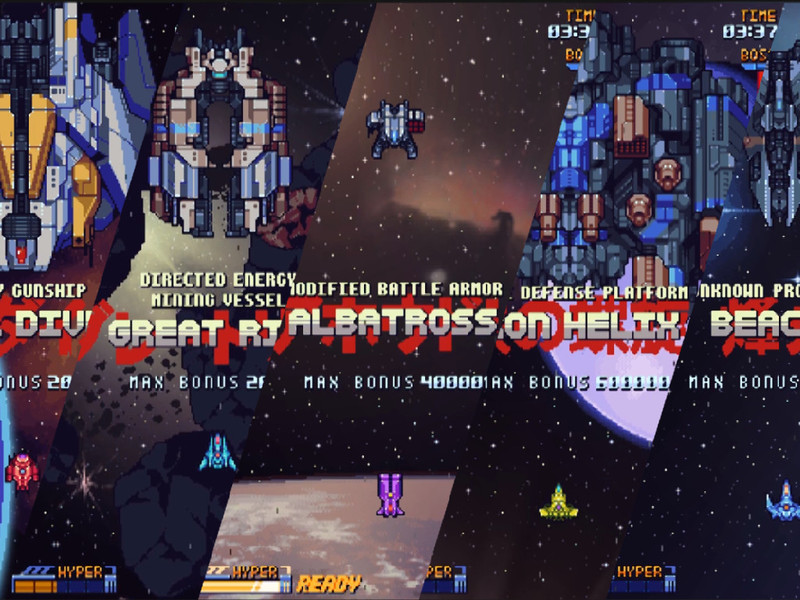 Veterans might more appreciate the Hardcore mode, however, which does away with the armor and brings back the one-hit death we’re generally familiar with. The game also bucks the usual arcade trend of lives, instead saving your progress at the beginning of each of the six stages and allowing for unlimited attempts.

The game’s presentation isn’t anything genre-shifting or mind-blowing, but it has a sixteen-bit quality that SNES enthusiasts will find nostalgic and appealing without the game being overly hipster about the whole thing. The soundtrack is a catchy mix of waveform synths and real guitar riffs and drum beats by the band Random Encounter, which feels at once modern and retro, but doesn’t destroy your eardrums, either. Enemies are varied enough to be interesting as they come, and the bosses have a good mix of aesthetics to make each stage feel unique, even if they’re all completed in exactly the same way. The game also features gamepad support, in case you want to go full classic.

If you’ve never played a SHMUP before, this is the one to start with. But that’s not because it’s the best in the genre or anything like that. There are some that are free-to-play but aren’t quite so feature complete, and you could likely emulate some of the older classics if that’s your bag, but this is not only fun and accessible, but you can count it among charitable work on your part, as well. The game was developed alongside some folks that organize a charity you may have heard of called Child’s Play, which seeks to improve the lives of children in hospitals and in domestic violence shelters. All proceeds raised by Super Galaxy Squadron are donated to Child’s Play, so by picking it up, you’re also spreading a little more good in the world.

You can grab Super Galaxy Squadron on Steam for $7.99 (currently on on sale for $6.79), a small price to pay for a little mindless fun here and there. Check a little video below and consider picking the game up, if for no other reason than to support Child’s Play.