Save The World, Kill Your Teammates In ‘Lost Dimension’

The end of the world is nigh: millions dead, cities in flames, and a giant ominous tower housing a great enemy destroys anything sent its way. This is stage set by Lost Dimension, a hybrid visual novel and strategy game by Lancarse and published by ATLUS.

To combat the threat, the governments of the world send in the “Gifted,” eleven soldiers with psychic powers to act as the final line of defense to save the world. The result is an intriguing—if repetitive—experience that not only forces you to fight against the denizens of the tower, but against your own companions as well. 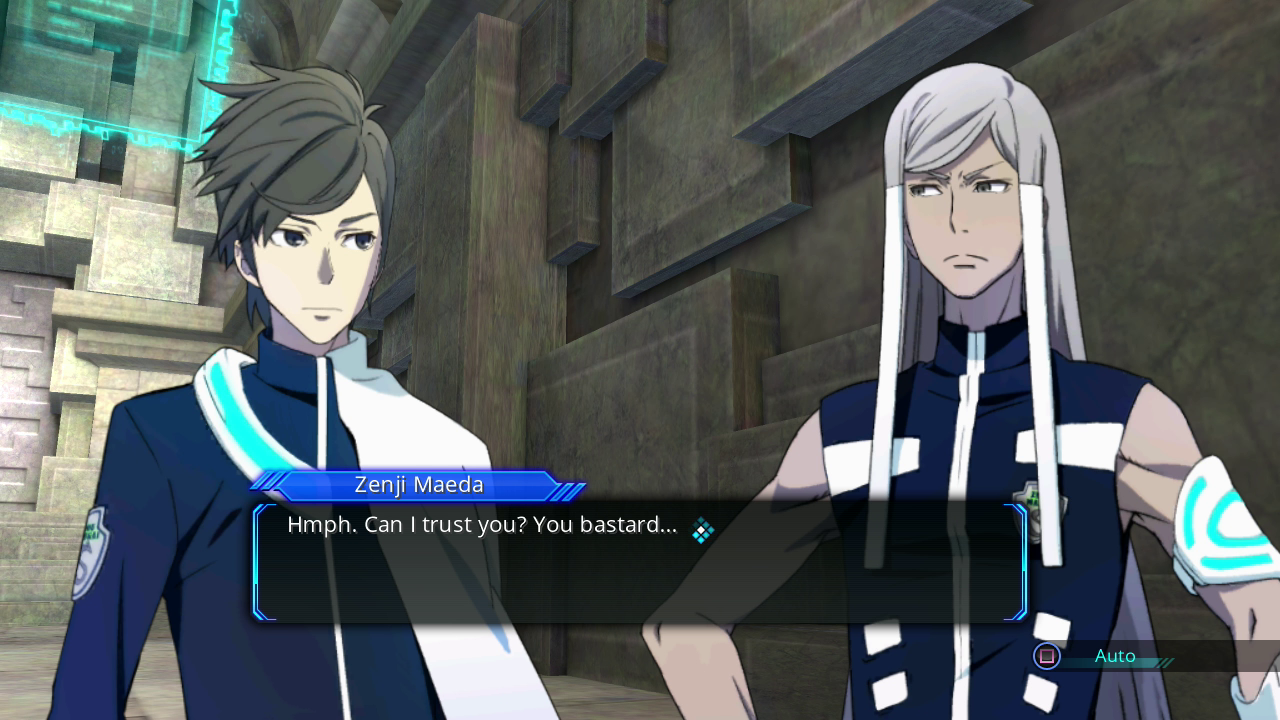 The designer of the world’s demise is the aptly-named “The End,” a mysterious figure impervious to most damage that, of course, inexplicably invites your ragtag group of anime stereotypes to reach the top of the tower and defeat him, and in doing so save the world. The End isn’t the greatest video game villain I’ve even encountered—but he is serviceable. His motivations are problematic for most of the game, and I didn’t particularly find him to be a driving force to move forward in the game; I wasn’t motivated by the story or a desire to destroy the villain, but rather by a more intriguing piece of news The End gives you early on.

There’s a traitor in your midst. Eleven Gifted enter the tower, but the tower isn’t simply a structure—it somehow affects its inhabitants, and this includes your team. Your team isn’t the best of friends as they enter, having only a cursory knowledge of one another. Being thrust into the tower and forced to rely on one another to combat the threatening enemies within increases the stress (not to mention the team’s rather unusual personality set).

This makes up the visual novel portion of the game. As is to be expected, there’s quite a lot of exposition in the game—protracted sessions of characters complaining about how difficult it is to trust each other, being unnecessarily shocked that any one among them might be a traitor, and lamenting their climb to the top of the tower. 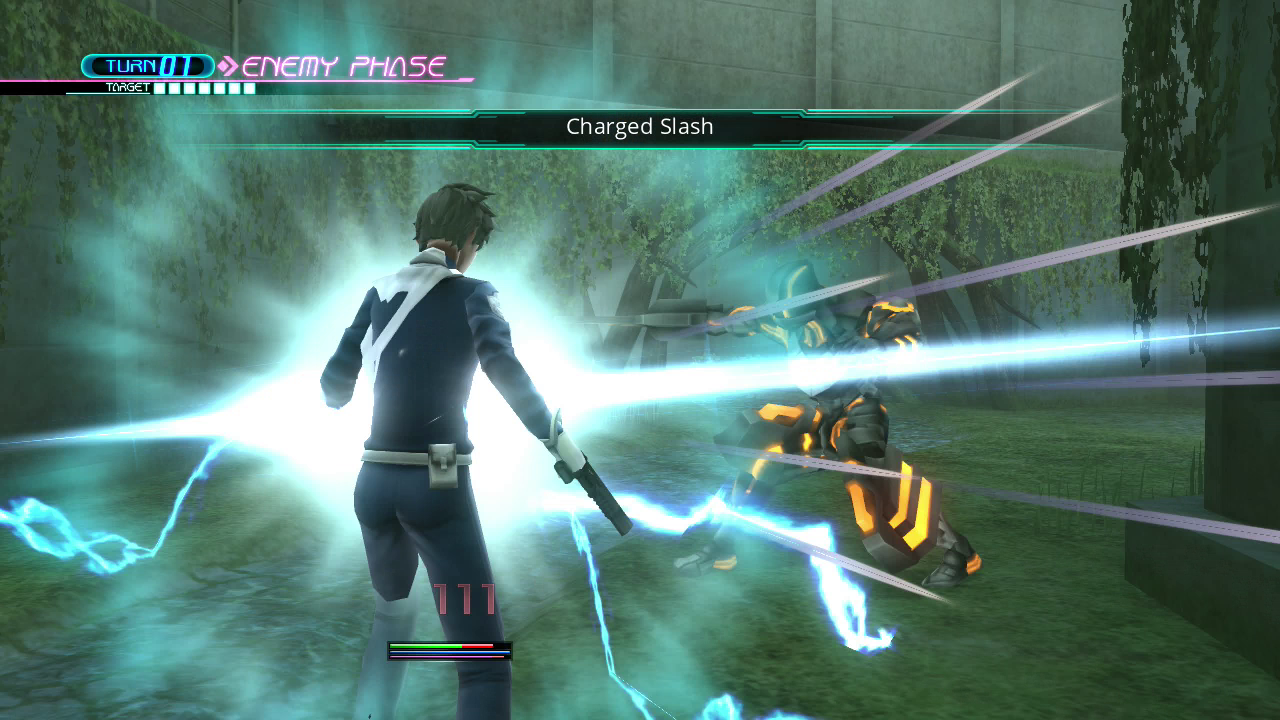 For fans of the medium, it hits close to the mark—characters are hyperbolized, though flat in terms of personality, but make up for it in combat diversity. Each Gifted possesses a unique ability as well as a combat role: Himeno, the aloof hotheaded elemental attacker. Toya, the stern commander of magnetics. Mana, a bubbly brawler who values cuteness over all else. The consummate professional soldier Nagi, who can levitate. The young and reluctant Marco, a telekinetic. Carefree Agito, master of teleportation. The extremely aggressive Zenji, who can form unique psychic bonds with allies and enemies alike. The telepath, Yoko, who resents her Gift. Ever-logical, Sojiro is a combat surgeon who can heal others with his Gift.  And George, who can root out and feel emotions in inanimate objects—all in the pursuit of his personal code of justice.

You control Sho—who possesses the gift of precognition. The effect of this is that after each mission, Sho will hear the hidden voices and glimpse the intentions of the Gifted that took part in the mission with him. On each floor, three of your teammates will produce negative energy. This ingeniously forces players to play around with different squad makeups (you can bring up to five allies on each mission, not including the required participation by Sho) in order to identify the possibles.

From there, you’ll use a healthy bit of logical thought and a rare resource called a Vision Point in order to delve deep into one of your teammate’s minds and root out if they are, in fact, the traitor of that floor. There is at once a sense of great relief and vague anger at using a point that clears a preferred character of suspicion. 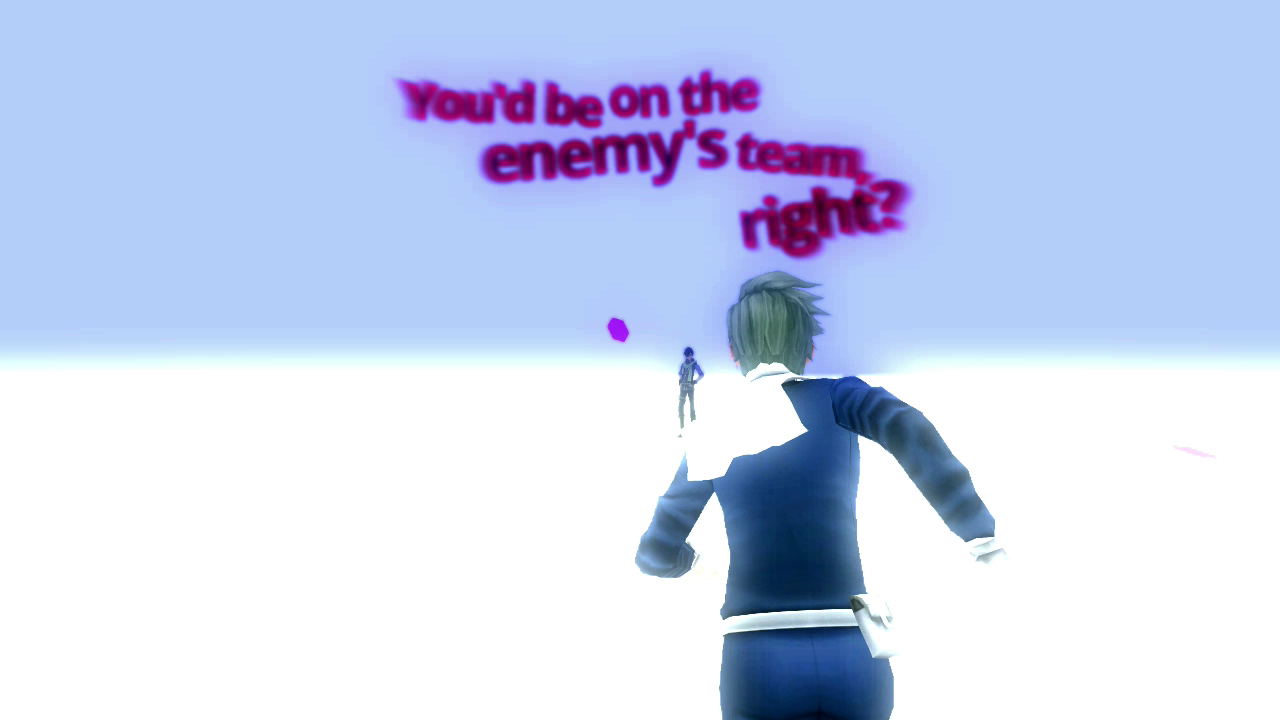 When compared to some of the gold standards for Vita games with a novel component like Zero Escape: Virtue’s Last Reward, whose characters I immediately began to bond with, despite how little you could actively affect your relationships with them, the caricatures in Lost Dimension felt weak—more valued for combat versatility, for instance, than as people (for the most part). Rarely do the characters offer up real depth, as you might hope for in a game with a social bond system in place. There are benefits to maxing your relationships with all the characters (you’ll be unable to do so in a single playthrough, yay New Game+!), but the game doesn’t actively make the fact that it’s so important particularly clear, and the system isn’t really compelling enough that many but the most dedicated fans would really explore it all.

Characters feel distinctly more diverse during the combative portions of the game. Each of your compatriots’ gifts give them unique ways to interact with each other and enemies, allowing for some really intriguing setups. Every other level they gain grants them Gift Exp, which can unlock new skills along a rudimentary tree with several branching options. Eventually, you can create complex synergies between characters—Zenji has a special ability that can form a temporary bond with all the characters at once, as well as the ability to share buffs he receives with a bonded ally. Combine that with Yoko’s buffing abilities, and you can spread a single cast of a buff to all allies. Since using the same squad over and over again is statistically unlikely to produce ideal circumstances to identify the traitor (who will turn on you in combat if you fail to find them in time), you’ll truly become familiar with each member of your ever shrinking squad. 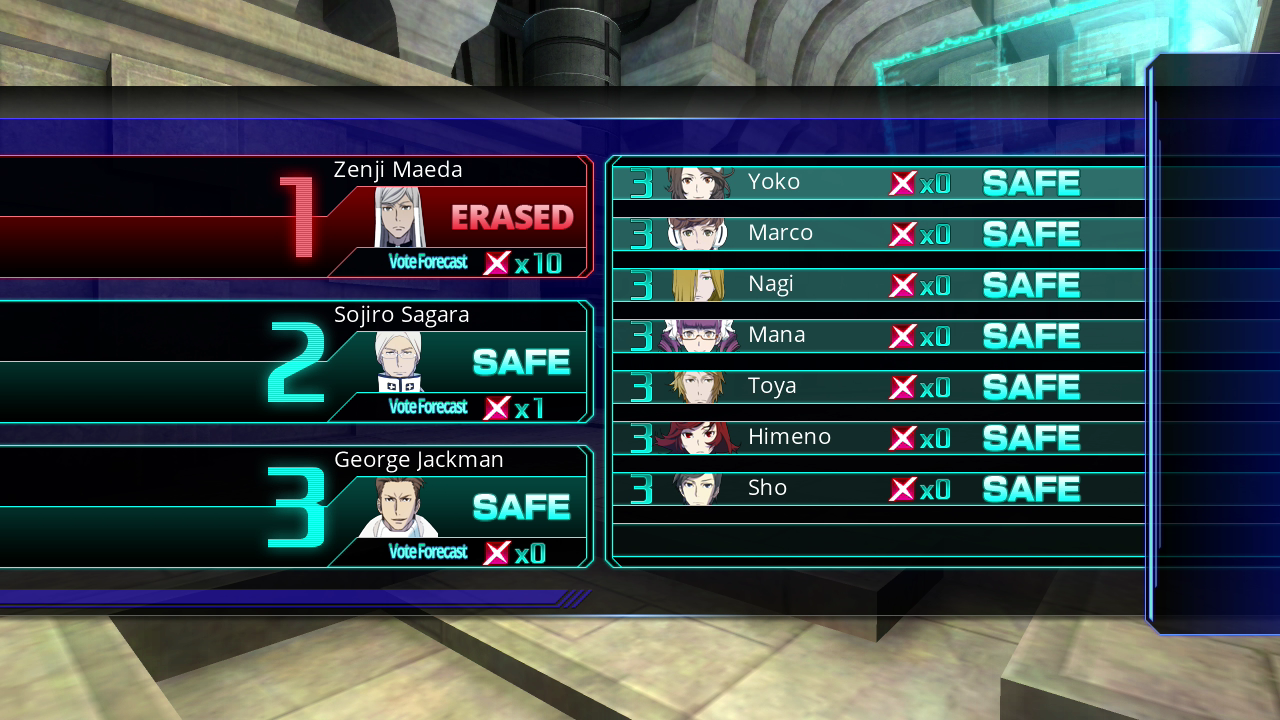 The squad shrinks because at the end of each floor, you are forced to pass Judgment on your allies. Each squad member votes, and the team member voted on the most is Erased, wiped from existence, whether they were the traitor or not. Simply identifying the traitor yourself isn’t enough, your “allies” will form their own opinions of each other based on various factors (personality, as well as using items or beneficial effects on one another in combat), as well as asking you for your opinion as to who might be the traitor—allowing you to sway the eventual vote toward your desired target.

It’s not all bad—the erased leave behind a piece of Materia which contains the essence of their Gift—allowing a surviving member to equip their abilities, maintaining ability-based synergies and unlocking powerful special abilities. To add to the replayability of the game, however, the traitors in each playthrough are randomized—aside from the very first one on your first playthrough, you cannot predict who might still be on your team at the same point in a game. You may have relied on Nagi and Agito’s enhanced mobility in one game, but not have them available the next time around, forcing you to utilize the tankier Mana or George, which can significantly alter your strategy. 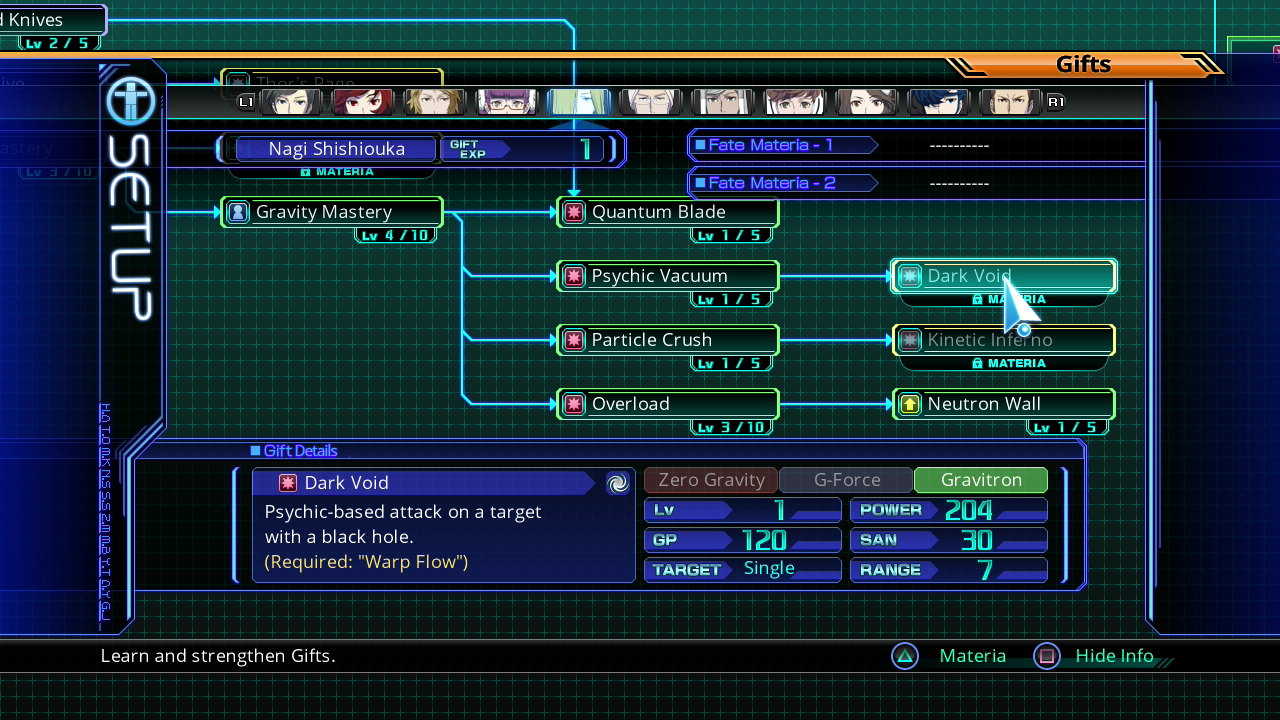 That being said, the actual strategy meta of the game isn’t particularly complex. The game is powerfully based on the idea of counter attacks and assist attacks. So long as the members of your team are amicable to one another, attacking an enemy while an ally is in range will result in each character making an additional attack against said enemy. By grouping together, you might have Sho hit an enemy, then Mana hit an enemy (to which Sho will add another attack), then have Nagi shoot them (and Mana and Sho will both attack again), and so on. Be aware, however, that so long as the enemy is in range, they will always counter attack.

Most enemies don’t have enough variety to be treated any differently; the only paradigms you generally have to acknowledge are ranged or melee—attack melee enemies with your ranged attackers first to prevent counter attacks, and clinch with a strong melee attacker. Move several allies up to a ranged attacker without attacking and then unleash multiple attacks at once to wipe them out. There are a few enemy types that demand more thought, but once you’ve figured them out, it’s fairly simple to eradicate any given foe.

These two major gameplay dynamics are individually mediocre—there are better novel games, and there are better strategy games. By gluing them together with the traitor mechanic, the game becomes a game with a gimmick that’s interesting, so long as you can overlook some weaker components. It’s a game I found myself playing religiously, but only for a short period of time—nearer the end of the game, it began to feel like a slog, and the game’s flaws became ever more apparent as the novelty of systematically rooting out my teammates wore off.

Truly, the game would have been better serviced by a system that affected a character’s dialogue and personality when they were a traitor. Each character relies on a slightly acerbic personality in order to give the impression that they could be the traitor at any given time, and they don’t act any differently under those circumstances. Rather than have a method by which one can rotate teammates and root them out with optimal efficiency, it would be a more compelling experience to actually learn about the characters and their motivations, to truly begin to care for them, only to find that they were capable of things you hadn’t imagined because you let your emotions cloud your judgments.

Combat could have been improved with additional enemy variety or objectives (the only objectives so far have been to kill all enemies, or a specific enemy). The characters themselves are pretty well fleshed, if a little poorly balanced (Agito is extremely effective in combat, while Himeno continues to be useless in almost all of my missions).

Even the game’s presentation is a mixed bag. Characters have distinct looks, and their novel presentations feel considerably more animated than they actually are—they’re two-dimensional images with smooth enough motion in subtle movements as to appear rendered in 3D at times—a clever trick. While the game looks good most of the time—movement animations, and such—there are times when it leaves much to be desired. Attack animations don’t feel particularly powerful or well executed, menus are often less responsive than they should be, the soundtrack is generally forgettable, and performance often dips well below optimal levels on the Vita version of the game (which is the version I tested)—it’s fairly obviously a port of a console version that suffered from some kind of time constraint.

There is also the rather unusual and concerning decision to add paid add-ons to the PlayStation store, allowing you not only special costumes and such, but adding items or even directly boosting the levels of your characters in the game for cash. This is a trend that merits its own, separate discussion.

Still, the game managed to claim a solid thirty or more hours of my time, and maintained genuine interest throughout a significant portion of that. The game feels young—it needs some time to mature. I truly feel like given some more time to find itself, it’s a game that could be quite phenomenal, but in its current state, might be relegated to fans of the visual novel genre, or those very much into games of this sort of Japanese sensibility.

Lost Dimension releases today and is available for $39.99 on PS Vita and PS3. Check out a video below, and prepare yourself to be betrayed (by your teammates, not by the game).