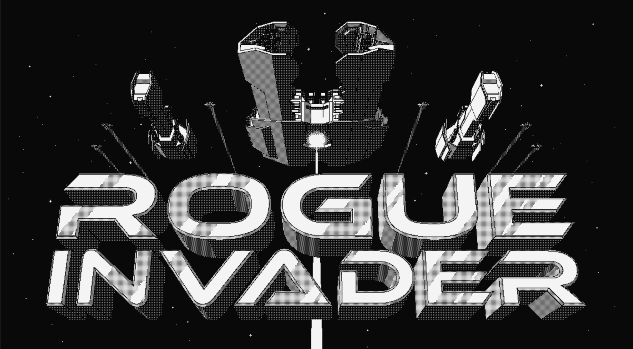 ‘Rogue Invader’: A monochromatic Indie gem in a sea of uniformity

The indie scene has grown exponentially in recent years. It seems that each and every week we see a new game hitting store shelves. Unfortunately, a lot of what we see are cookie-cutter clones of prior releases.

It seems that when one specific game or genre catches on, the indie world cranks out a plethora of carbon copies, tweaking the smallest gameplay elements and artistic styles in order to cash in on the craze. It isn’t all bad though, and we still see many developers attempting to break the chains of mediocrity by providing gamers with innovative and varying gameplay experiences. One such developer, Squishy Games, is confident that their title, Rogue Invader, can help breathe new life into the market. We were very fortunate to receive a first glimpse at the team’s alpha version, and gain a first-hand view of what Rogue Invader has to offer.

From the first moment you load this release up, you can’t help but take note of the eerie, monochromatic color scheme that fills the screen. From the title, to menu screens, to in-game, and every section in-between is enveloped in black and white. This gives the release a very old-school feeling, even if the art itself is vastly superior to any 16-bit title. Hand drawn backgrounds and amazingly detailed characters blend together to create an experience that is every bit as storybook as it is interactive.

The creatures you’ll find yourself up against seem to take a page from the 1979 cult classic Aliens, looking somewhat similar to H.R. Giger’s Xenomorphs. These ghastly lifeforms prowl the planet surface, wielding heavy weaponry and pursuing the hero with an unwavering bloodthirst. The hero herself (or himself depending on seemingly random choice), warps to the planet surface, covered from head to toe in bulky armor, and armed to the teeth. Character movements are subtle, yet rushed, and the way in which the world moves is like a bizarrely engrossing game of cat and mouse. The backgrounds, animations, and characters in Rogue Invader are masterfully crafted, and if you think a two-color scheme takes away from the overall visual complexity, you’re sorely mistaken; f anything the stark black-and-white monotones help to craft a grisly picture of survival and desolation. 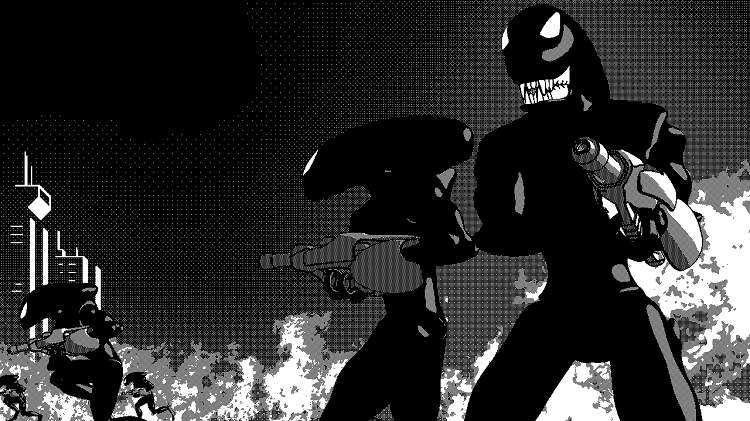 Rogue Invader‘s gameplay is deceptively simple. The overlying object of the game is to survive as you make your way towards the ultimate goal of eradicating a malevolent alien enemy. The story follows a massive space battle in which human supply ships were destroyed, leaving a massive platoon of soldiers marooned above a hostile alien home world. With millions of troops hungry for action, your mission is to end the war at any cost necessary. You’ll take control of a singular marine, sent to the surface of the alien planet, and fight your way through hordes of enemies.

If that marine is struck down, another is ready to take their place. Along the way you’ll collect materials which can be used to upgrade your guns, and help you craft new weapons to use against your foes. You can also unlock helpful modifiers which will power up your weapons with add-ons like increased clip size, damage output, and fire rate. The controls are simple, and the gameplay is as simple as using destructible cover to shield yourself from fire, while taking aim at enemies and eliminating them. But Rogue Invader comes with a surprisingly deep and complex customization system that will give you a wide array of weapon types to choose from, allowing you to enjoy the experience according to your own play style.

It’s also important to note that Rogue Invader isn’t a casual ride where you become an overpowered force that can clean the surface of a planet with the snap of two fingers. The difficulty scale will gradually ramp up as you proceed further through the gauntlet, and eventually you will meet enemy A.I. that is every bit as deadly as you are. Using cover effectively, knowing when and where to move, and keeping a 360-degree perimeter around yourself is the key to victory.

The start of Rogue Invader plays very much like a well crafted isometric arcade shooting game, but the end-game in this release is a treacherous chess match that will test your strategy every bit as much as your shooting skill. This isn’t a casual slaughterfest, and by the end of your journey you can guarantee your skills will be tested. This is where the underlying layer of complexity oozes artfully into Rogue Invader. You lack supplies, but through determination and scavenging, you are capable of increasing your odds of survival. Thanks to the research bay, you’ll be able to create powerful weapons and upgrades that will inch you ever so closer to ending this intergalactic war. You are free to build things the way you see fit, but it’s important to note that certain upgrades and mechanisms are much more valuable to you than others. Deciphering when and why to unlock a specific upgrade could be just the boost you need to surpass a certain milestone.

Rogue Invader isn’t just artistically beautiful, but manages to present an exciting, albeit macabre storyline, without introducing many complex elements and character developments. It’s every bit as enthralling to play as it is to look at, and it does a fantastic job of blending together addicting retro gameplay elements with a skillfully drawn monochromatic art style. The sound effects fit perfectly with the theme and the developers have brought game and film musician Caleb Blood on board to create an original engrossing soundtrack for the upcoming release.

Rogue Invader should act as a wonderful addition to the Indie world and shows a lot of promise. It will be very interesting to see what types of things Squishy Games adds in the near future. The group is currently seeking additional funding and aid on Kickstarter to help fast track the title to completion. If you’re looking forward to this release as much as we are, be sure to head on over to the Kickstarter Page and support in any way you can. For more information regarding Rogue Invader, check out the developer’s website here.