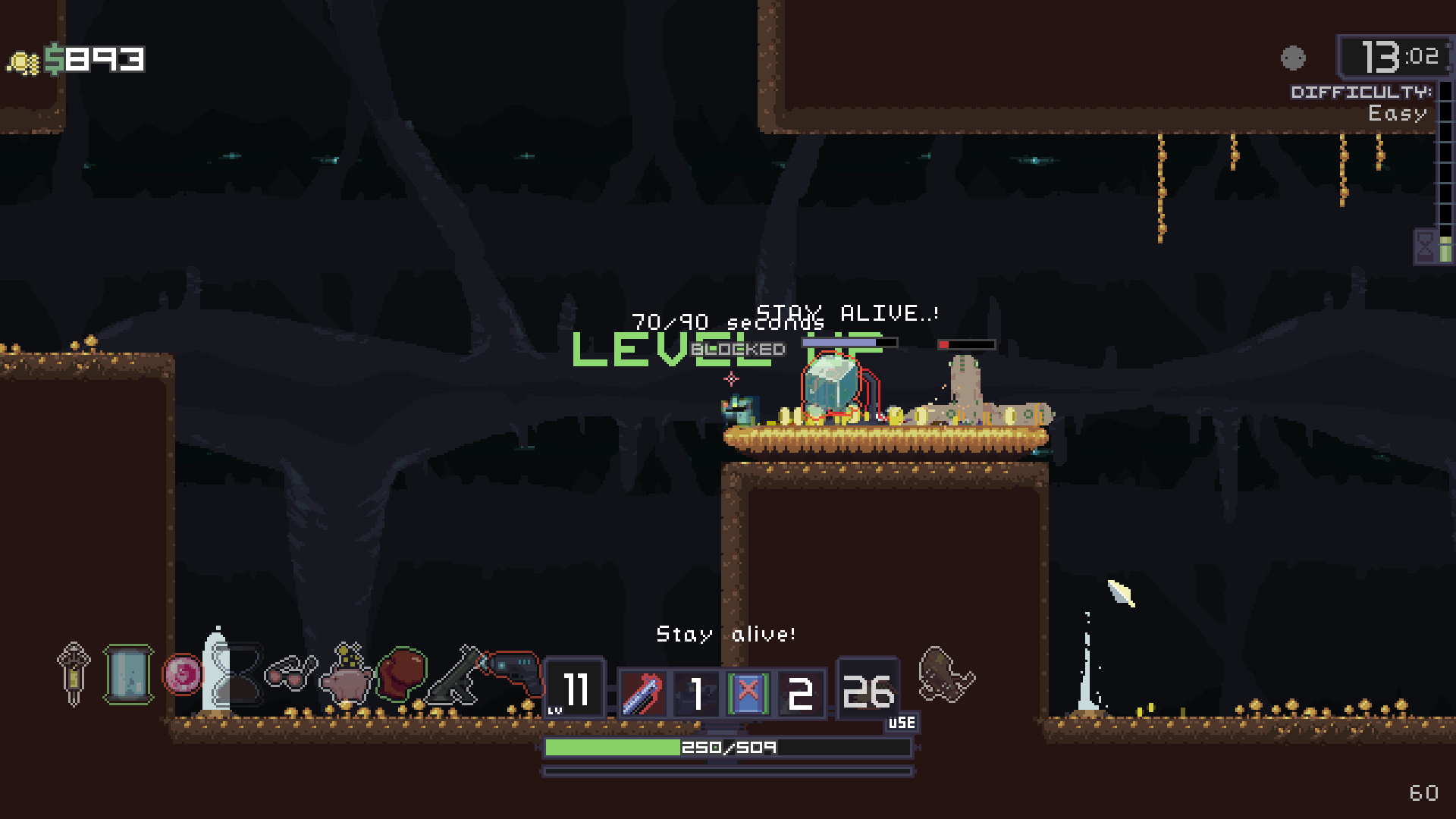 Generally speaking, “Deliveryman Simulator” is not high on my list of preferred gaming genres. That being said, if said deliveries take place on an alien world quite literally bursting at the seams with murderous creatures, things get considerably more interesting. Enter Risk of Rain, an action roguelike by Hopoo Games and published by Chucklefish.

The premise is simple enough: You are a crew member aboard the UES Contact Light, an interstellar delivery ship. One day, as you pass an alien world, a mysterious being warps aboard the ship and wreaks havoc, summoning strange beasts and bringing the ship down. All the cargo is ejected, as well as an escape pod. Once on the planet surface your task is simple: find a way back to the ship and get off the planet, alive. 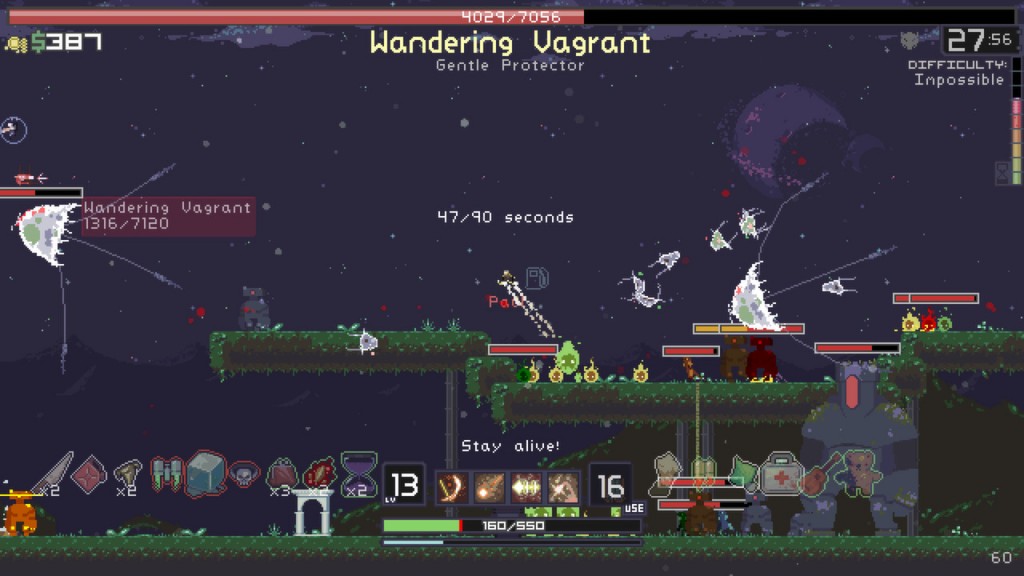 Wait, I said simple, didn’t I? As it turns out literally everything on the planet wants to kill you, and has made it their life’s goal to do so. The game escalates in difficulty the longer you play, so while things start out relatively calm, it can get our of hand quickly if you don’t push forward. To move from one level to another, you have to activate a teleporter, which summons a large batch of creatures and activates a countdown. All the monsters must be slain before moving on.

The only solace you have against the alien hordes is the plethora of cargo that was scattered from your ship to the planet’s surface. Turns out you were delivering quite a batch of curiosities, ranging from stuffed teddy bears that grant additional armor to portable mounted missile launchers, every item on the ship grants you some kind of benefit. 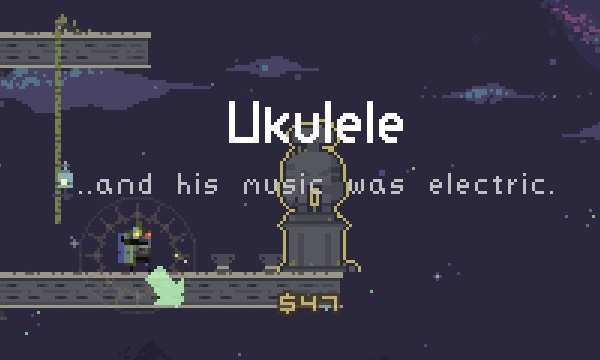 The most interesting thing that separates Risk of Rain’s item acquisition from those of, say Binding of Isaac or Dungeons of Dredmore is that, with a few exceptions, all items can be gathered more than once, and will stack linearly each time. The Lens Maker’s Glasses, for instance, grant a 10 percent chance to deal a critical for double damage per pair of glasses found during a run. Assuming you can live long enough (spoiler: you probably won’t be able to) you can amass truly amazing swaths of loot, turning your character into a veritable conduit of death incarnate.

This leads to a somewhat concerning divide: the game has three difficulty settings, which range from Drizzle or “Easy” (Spoilers: It’s not that easy) to Monsoon (practically impossible). The difficulty often means that, while your skill at the game can certainly help you, you’re often at the mercy of the RNG gods for good items. A lucky run can render you completely overpowered relatively quickly, while a dearth of items will end runs with depressing speed. As this is a roguelike, though, dying is to be expected, and there is enough incentive in unlocks and the like to keep you coming back.

There are over a hundred items available in Risk of Rain total, with just over half of them available from the start. More items are unlocked at the end of a run, provided you met the conditions for one of the achievements in the game. The interaction between items is pretty much isolated, that is, many items provide unique effects that are in no way affected by the others (see: Binding of Isaac), but their variety is more than enough to keep each run feeling fresh. 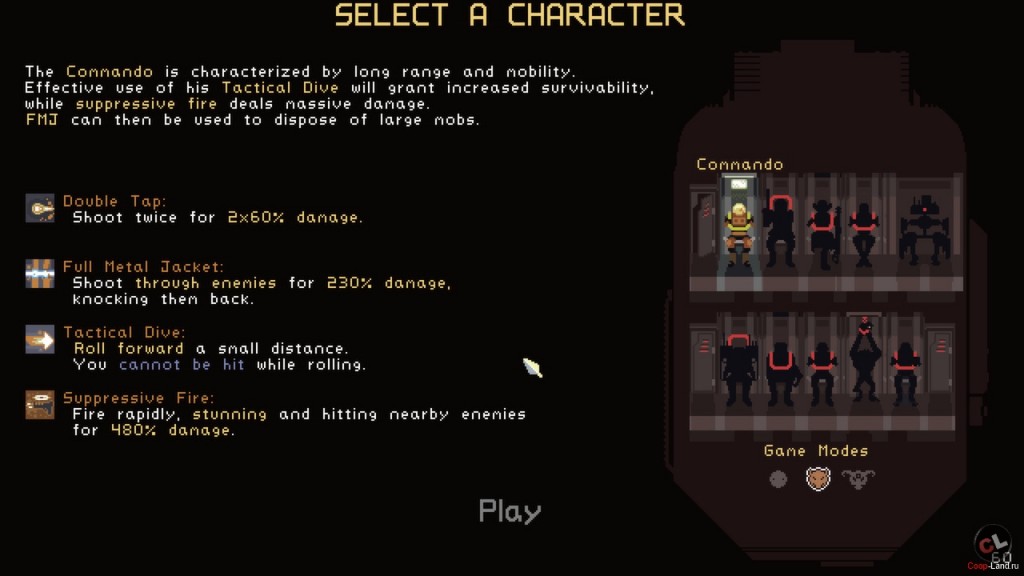 There are also ten classes to choose from the in game, though nine of them require unlocks similar to items. Every character is unique and has a unique hook, and a set of four abilities (a basic attack, a stun attack, a crowd control ability, and a dodge)  that suit a particular play style. The commando can engage large groups of enemies at once from long range and lots of lower-damage hits. The huntress can move while using all her abilities, so she focuses on kiting enemies. The sniper can only fire on shot at a time without reloading their gun manually, but has the damage potential to kill even bosses in a single shot.

The visuals are sort of par for the course for an indie title like this: smoothly animated pixel are with very small sprites. There isn’t a huge amount of variety in the monsters and various characters, but it successfully adds to the smothering feeling of being attacked from all directions, while also making sure the game can handle the sometimes extreme numbers of enemies on the screen.

While Risk of Rain is primarily a single-player affair, there is a multiplayer mode included, though it is a little more complex to handle correctly. There’s no multiplayer backend, so it requires a bit of know-how to ensure proper port forwarding, and requires direct IP connections to set up matches, and even when all the steps have been followed correctly, the game does not always give the proper indications that everything is good to go. This leads to frustrating bouts of messing with routers, disabling firewalls and establishing static IPs, only to have the game think your settings are wrong (but it might allow you to connect anyway. There’s no way to know, really.)

All-in-all, though, Risk of Rain is a worthy investment. The game is capable of raising your heart rate when things get hectic, and the constantly rising difficulty makes sure that you’re constantly working to your goals. Every character feels unique, and an item set can really make you feel powerful. The gripes are few and far between, the poor multiplayer and a depressing easy final boss come to mind.

Risk of Rain is available through Steam for $14.99, and will easily give you many a day’s worth of enjoyment, especially if you want to try to unlock absolutely everything. Fans of permadeath-ridden lootfests should definitely sign up for a stint on the UES Contact Light.