Recruit Your Constituents For ‘Citizens Of Earth’

It’s a familiar scene for any gamer of the ’90s: our protagonist sleeps in a darkened room, awoken by his mother who informs him that, for some reason or another, he needs to get up and get things done. What begins then is an adventure that eventually holds the fate of the world in its hands.

Of course these aren’t the only JRPG parallels in the new ATLUS-published Citizens of Earth, but the game certainly has a unique flair about it. It takes overlooking a few unusual aesthetic choices to get to, but the game has proven that, after some effort, it’s got a decent amount of meat to it—it’s a great RPG to play a few minutes at a time. 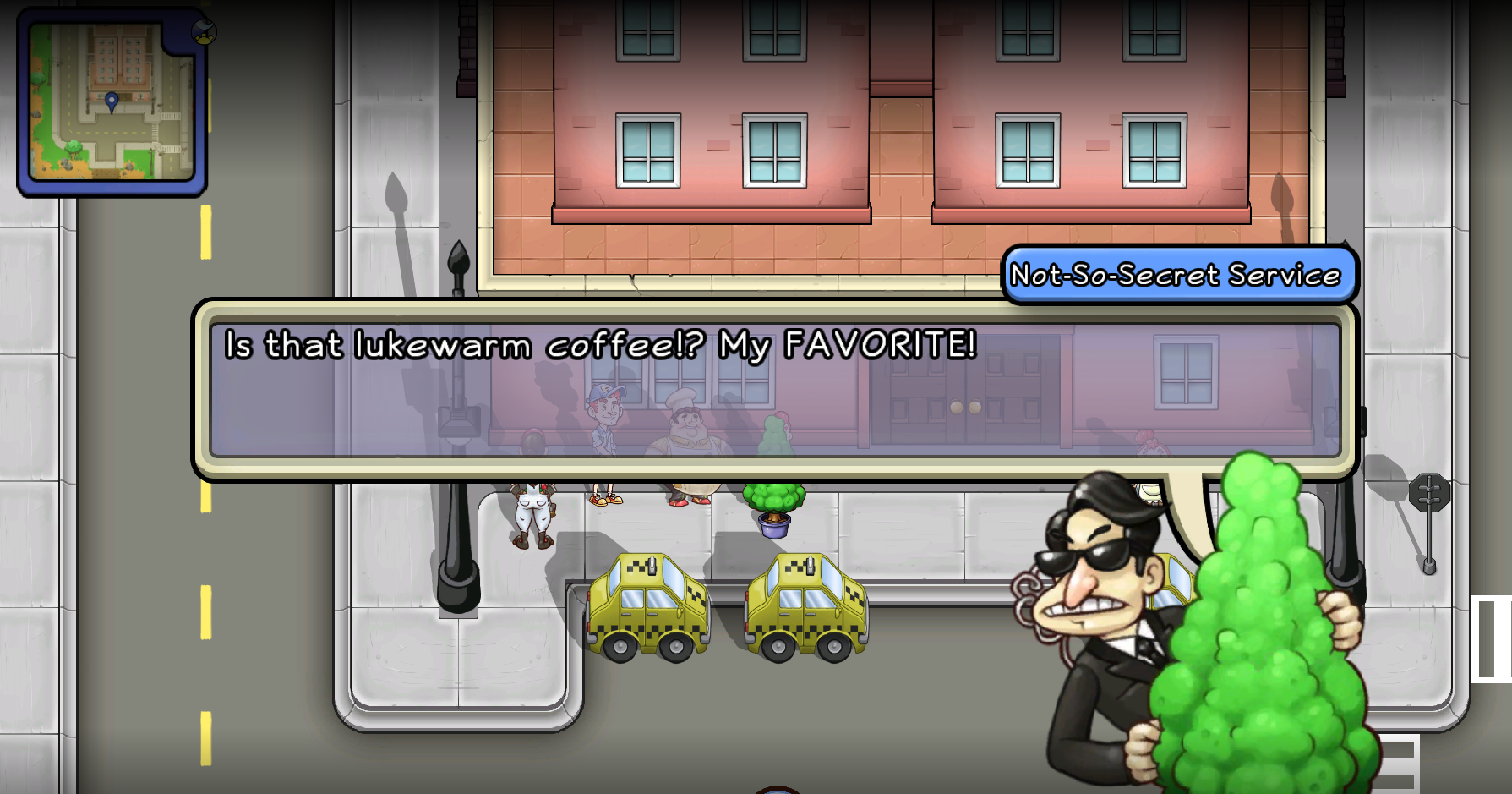 Developed by Eden Industries, a fairly fresh indie studio, Citizens of Earth seeks to replicate the feelings of the golden age of SNES RPGs with a lighthearted, party-building romp through a colorful and comical world—in fact, the Earthbound/Mother inspiration is very clearly on display with this title.

The inspiration was obvious with the clichéd opening, and similarly peppers the narrative and the dialogue with all the quirky characters in the game. The story knows what it is—it’s not trying to compare with the games it wants to emulate: Chrono Trigger, Secret of Mana, or Final Fantasy VI. Rather, the game does what indie games these days do best: work out our nostalgic muscles, whilst poking fun at all the unusual qualities those old games encompassed.

You awaken and are introduced to your protagonist, an aging politician that has just been named the Vice President of Earth. This is normally the sort of massive announcement that bears explanation, but the game is self-aware enough to know that the details of this are unnecessary—what matters is that you’re the caricature of the modern-day politician. You’re a bumbling fool that doesn’t know what’s best for anyone. You don’t actually do any work in the game, aside from court people’s votes. Your first party members are your own mother and brother, and everyone is constantly expressing surprise at your victory and is fully aware of your obvious failings, but follow you regardless, an allegorical representation of a herd-minded public. 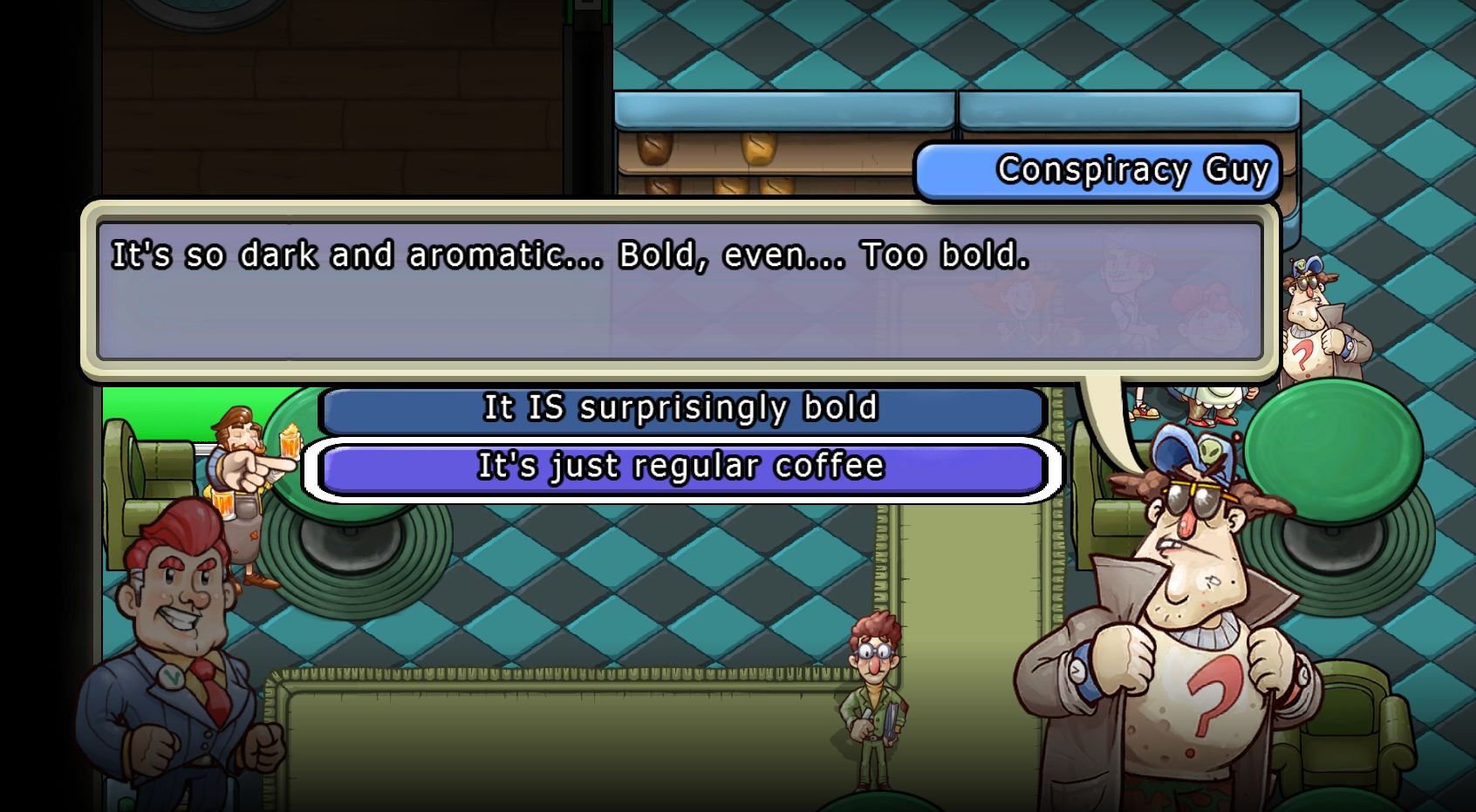 The story isn’t anything to expound upon, really. It’s not the best-paced or the most emotionally driven story I’ve seen, but because it doesn’t try to take itself so seriously, any problems present don’t really detract from the game too terribly. It’s enough to set you on a path and make it easy to return to said path when the massive number of miniature distractions begins to bore you. It’s easy to track objectives, even given the lack of a world map, with simple objective indicators that are (nearly) always available and always point to the next possible area where you can advance the story, achieve secondary objectives, or recruit new party members.

And recruiting party members is the main draw of the game, as well as one of its best qualities. Where many JRPGs of the day featured nine-to-ten-person casts of characters, Citizens of Earth rocks a massive forty available party members, each featuring unique game-world talents, battle abilities, and just enough personality to make them quirky and interesting, even if they don’t all have heart-wrenching storylines or sidequests.

Your mother, for example, provides basic tutorial information as her talent. Your brother is a FEDUps worker, and can place orders for simple items at any time. The lifeguard opens up underwater areas, while the car salesman has a sweet ride for quick travel along roads. The bodybuilder can lift heavy obstacles out of your path, the farmer can combine materials into new items, the school mascot can change the game’s difficulty for proportional rewards, the handyman can repair certain doors, the yoga master can redistribute levels into specific stats, the list is impressive, and there are even secret synergies to be found: the teacher can tutor other characters to grant bonus experience without battling, and the scientist can fast-forward or rewind the in-game time by several hours, which can instantly complete the teacher’s training. 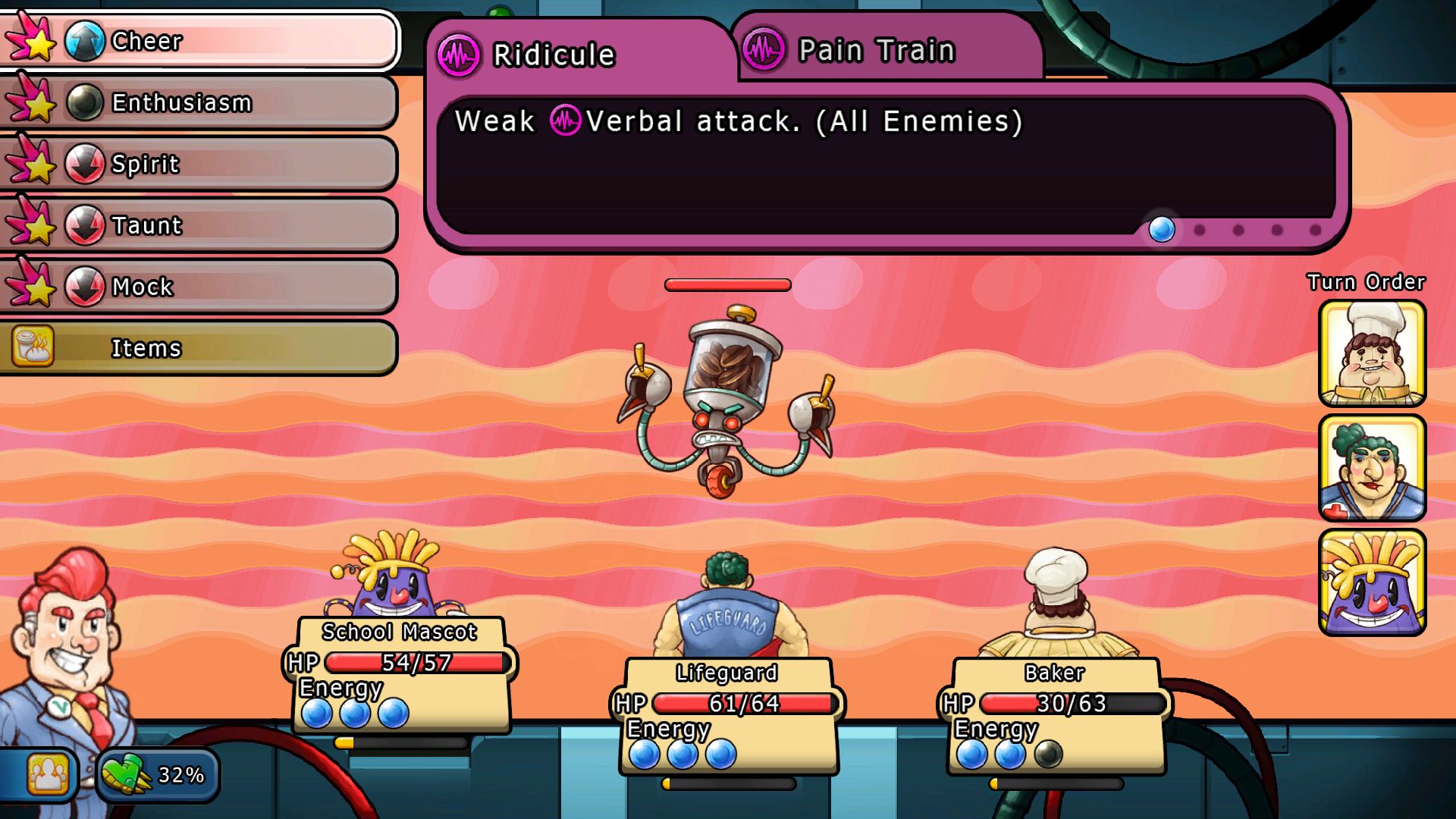 Each of these characters also fills their own role in the game’s less-than-mainstream battle system. You can have direct-damage bruisers, support characters than can heal allies and keep them healthy, or ones that have more unusual or specific qualities. In addition to basic stats like strength, HP, agility, defense and the like, every character also has an available pool of energy. Some abilities grant energy, and others draw from available energy, resulting in combat that isn’t just using the same abilities over and over again.

The bodybuilder, obviously, has a high health pool and strong attacks. However, all of his damaging abilities require energy, otherwise he’s buffing his attack or defense by flexing and posing before lifting his enemies and power squatting them for damage, or suplexing them for very heavy damage, while enduring some recoil damage. The baker, however, doesn’t hit terribly hard, but can bake treats during fights to heal and revive comrades.

Every character’s abilities are hilarious and geared toward their unorthodox personalities: your mother literally nags enemies so hard their defense drops, and hugs people to restore health. She can issue timeouts to freeze enemies, and issue some tough love to damage an ally but also greatly boost their attack. One of my favorites, the Conspiracy Guy, has basic energy-granting abilities that derive their power from savagely accusing enemies of coverups, or revealing complex government secrets in order to confuse foes. He also learns a wide range of elemental damage, in order to exploit weaknesses easily, zapping enemies with cattle prods, dousing them in truth serum, or turning bright spotlights on them. He can also track enemy stats and abilities with his Almanac talent. It helps that he often accuses people of “working for them” when attacked.

One of the biggest barriers to entry on the game is its presentation, though. The visuals feel cheap, using simple, almost newspaper-comic-esque looking sprites with very simply animations. Dialogue windows often self-advance when there’s a menu at the end, leading to a lot of accidental chat windows being opened with NPCs. You can’t use items or abilities outside of combat more than once without the menu resetting a few steps and taking several extra seconds to use. During battle, the devs have rather confusingly chosen to have strange animated patterns as a background, which can be completely eye-piercing at times. The game is pretty much fully voiced-over, and the voice acting isn’t upsettingly bad, at least, though it certainly doesn’t give any rousing performances, either. Suffice to say, the game would benefit greatly from some quality-of-life tweaks and an enhanced UI. 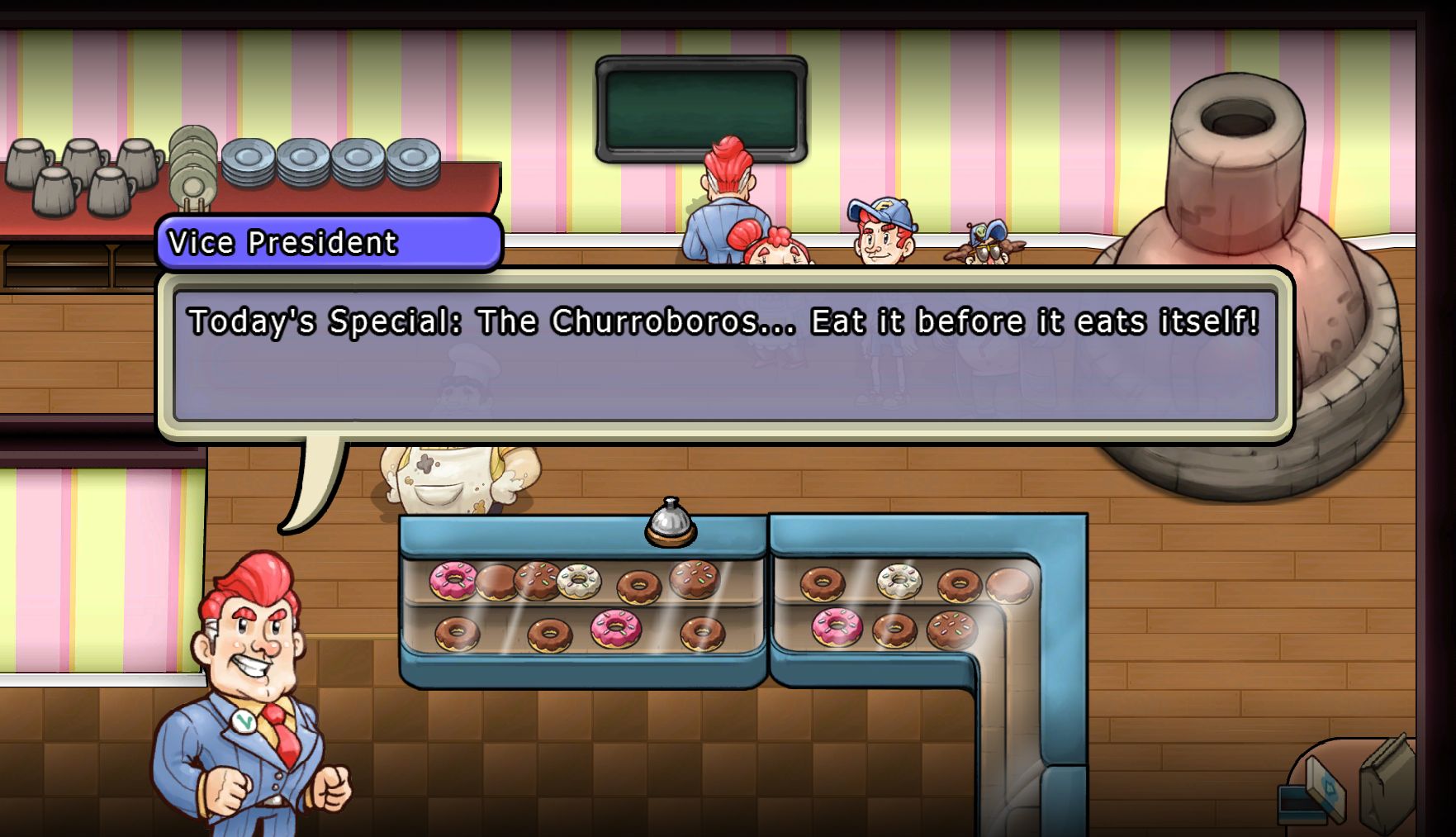 The game is certainly far from perfect. And at initial glance, it looks like a cheap knock-off of some kind. But with a little effort given, the game is a fun distraction, best played when, say, re-watching old TV shows on Netflix, waiting for an oil change to finish, or while your wife tries on clothes at the local dress repository, or whatever they’re called.

Citizens of Earth can be purchased on PC through Steam, the PlayStation 4, and the PS Vita for $14.99—a price that is manageable, even if it does feel a touch steep. The game was released on January 20th, and ATLUS generously provided us a review copy of the game.