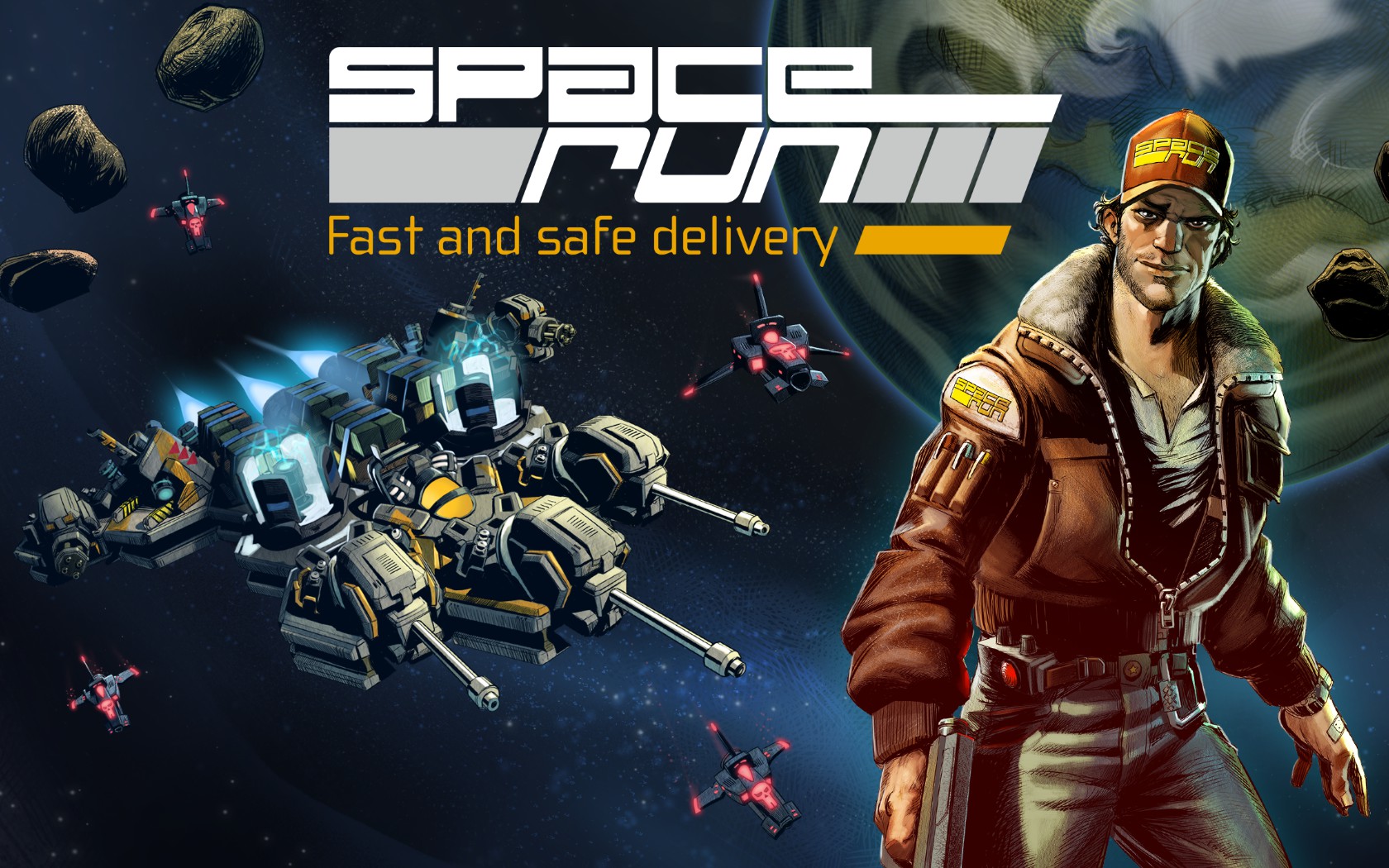 There isn’t quite a life like that of an intergalactic delivery man, and thanks to Space Run, you get to know what that life is like first-hand. 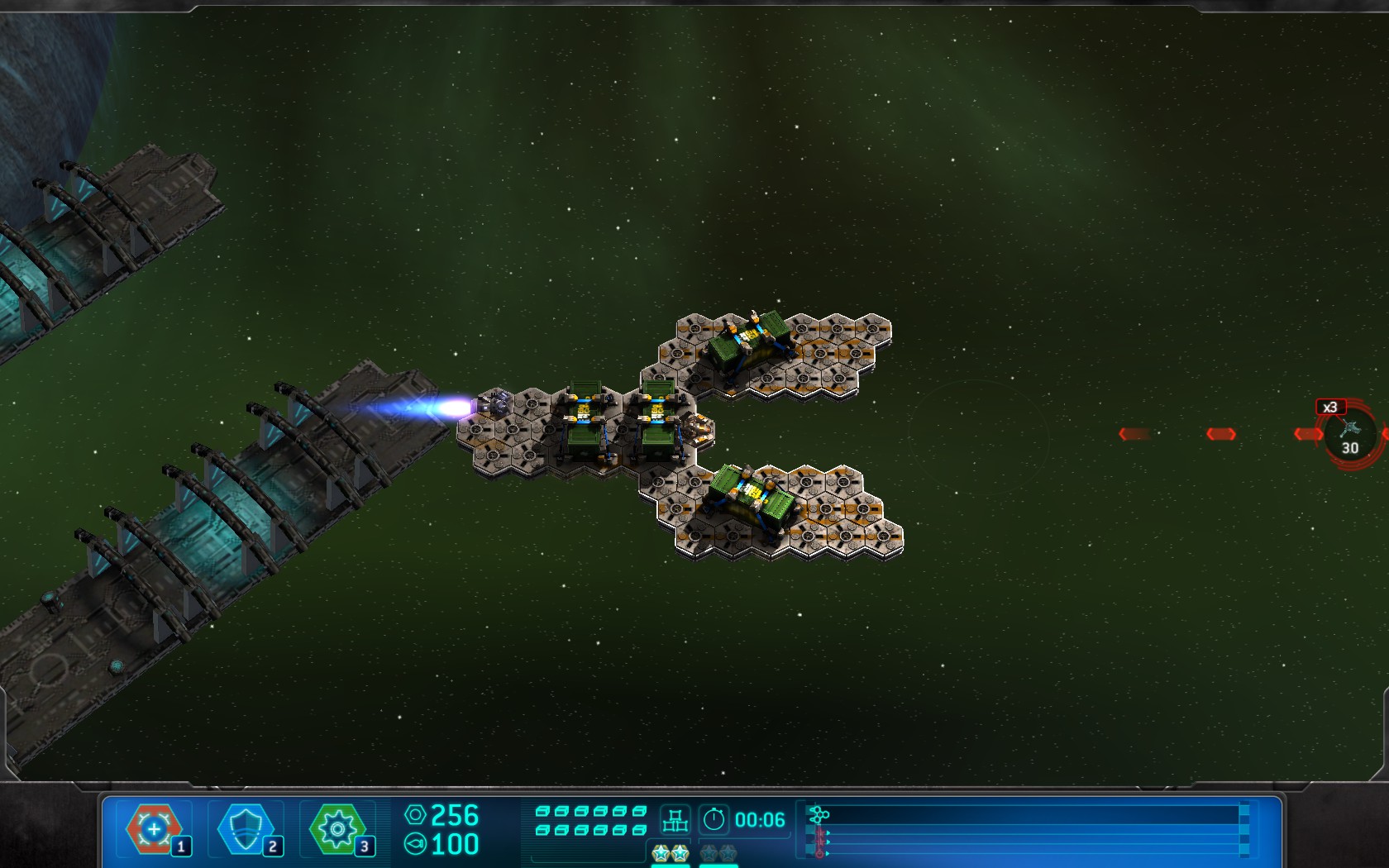 To describe Space Run succinctly I feel doesn’t quite do it the proper justice. It’s a tower defense/strategy/speed run/vessel building hybrid that tasks you with loading a pre-defined ship layout with cargo, then developing a series of defenses to protect yourself (but mostly your cargo) from the various threats you encounter in space. You know, asteroids, rogue hunks of crystal, pirates, luxury liners working for competitors, that sort of business. When I first heard about the game, it definitely piqued my interest. After all, it’s easy to grow accustomed to—and summarily bored of—the traditional tower defense mechanics.

Space Run tries its best to upend these, and while it certainly does so with style and gusto, it’s not the most inventive concept I’ve ever seen. What’s new here, though, is fun and interesting, the differing ship layouts and the qualities of cargo you carry sufficiently vary the playstyles to keep things interesting, and the game manages to avoid any major pitfalls, leaving us with a fully-realized experience that finds a good balance of not being too intensive, while providing a challenge and some chuckles.

Space Run tasks you with taking up the role of an expert space-delivery man—Buck Mann, to be precise. Buck takes the valuable cargo that people want transported, and shuffles it from point A to point B across space highways, braving many perils along the way. Luckily, he and his android first mate have some connections that allow him to purchase and construct high-grade hardware to protect his charges, everything from laser cannons to missile launchers to plasma shields. All-in-all, Buck takes contracts from five different companies, each of whom has a distinctly different characteristic to vary how your cargo is handled from one mission to the next.

Big Cargo, for instance, has big cargo (big shock, I know)—their containers aren’t anything special, other than the fact that they often take up a lot of space on your ship. Clever positioning is often required to make sure you can properly place defensive structures and turrets to make sure your containers don’t come under fire. They also possess unique mechanics that can construct additional containers in-flight, which can increase your profit yield upon successful delivery.

Nuclear Star mostly deals in volatile and hazardous waste products, their containers might not be as large or numerous as Big Cargo’s, but if they’re destroyed, the reaction is violent and can cause serious damage to your ship. 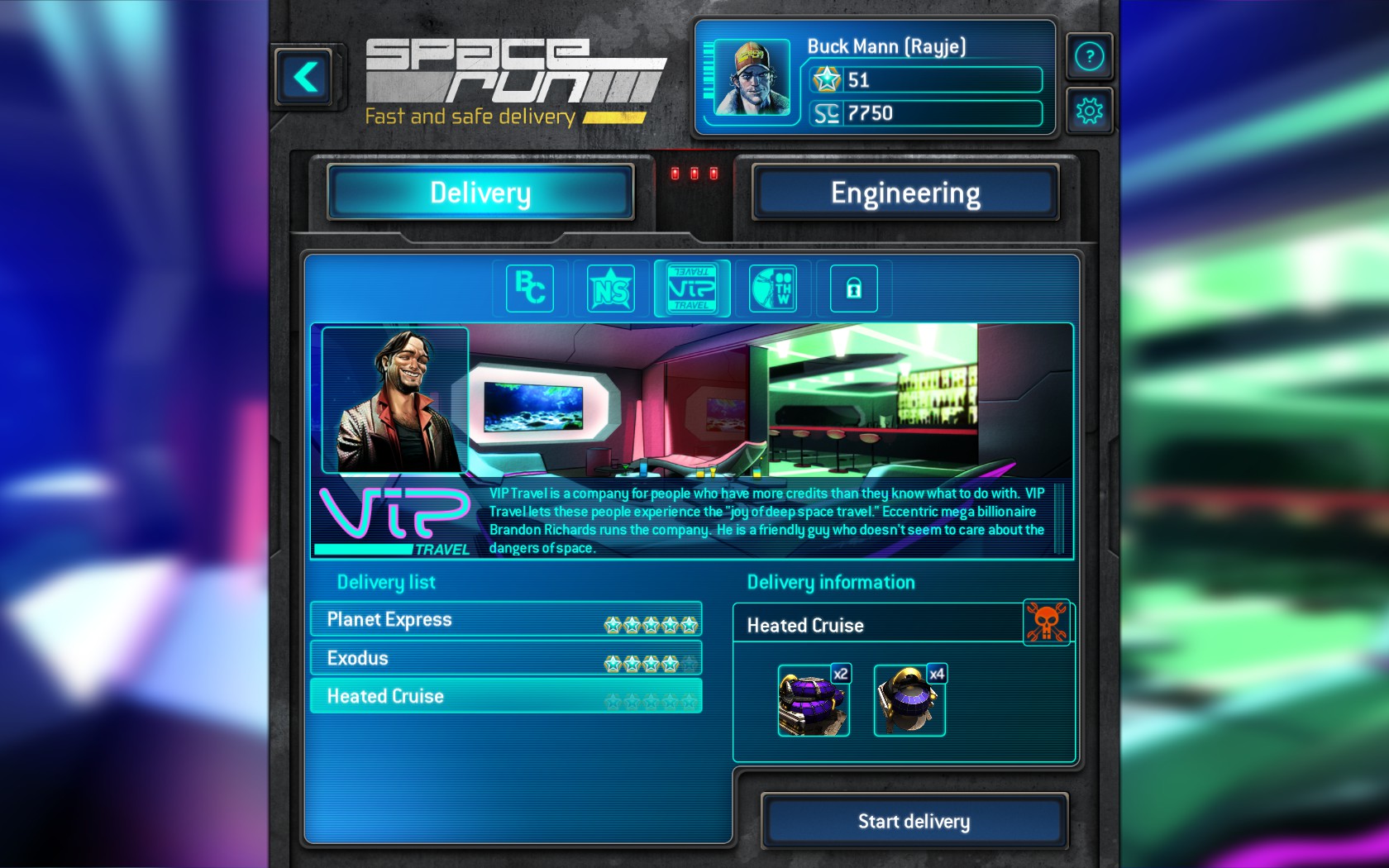 VIP Travel mostly deals in luxury liners and cruises. In these missions, you have special luxury rooms that must be placed on the outer edges of the ship to provide a proper view, as well as build power generators for said rooms, lest your guests become dissatisfied (this manifests in these rooms slowly taking damage so long as they’re unpowered). Of all the missions, these are probably the most utterly infuriating. Some of the rooms can become quite large, and efficiently powering them with as few reactors as possible requires considerable bunching, while simultaneously preventing most defenses from being placed between the units. These are a true exercise in careful planning, especially if you’re unaware of what direction your attackers will be coming from. 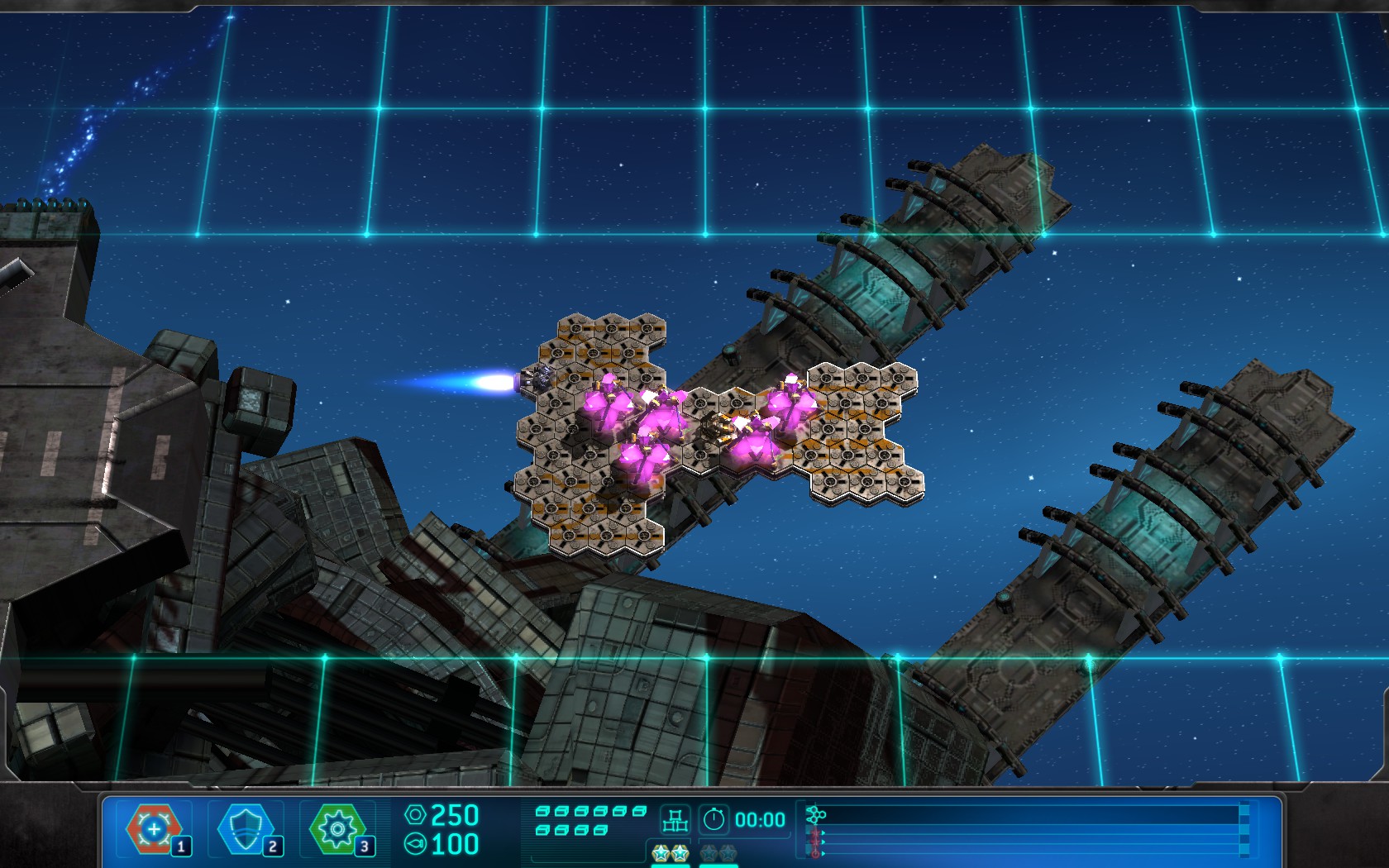 Out Of This World is run by humans—they swear—and deals in transporting strange alien artifacts. These are often large glowing crystals, which possess the curious quality of draining power from nearby constructions on ships. While this doesn’t affect the most basic constructions, the more advanced ones do need power to function, and for every crystal said construction comes into contact with, an additional power must be supplied to properly utilize that device. So my dual laser cannon normally requires a single power to run, but if it’s touching two crystals, I’ll need three total power to be supplied for it to function correctly. While working these missions, when things have gotten particularly hectic, it’s rather easy to build a defensive structure without considering the additional power requirements, which has resulted in quite a bit of lost cargo for me.

AI Squared is the last company you’re contracted by. While all the others allow you to place their cargo manually across your ship as you desire, AI Squared’s special AI cores start automatically in specified locations. Rather than just be delivered as-is, you have to expend materials en route to build special sets of cables to connect these units to your command center in order to activate them, any that are not connected by the time you reach your destination are as good as destroyed. 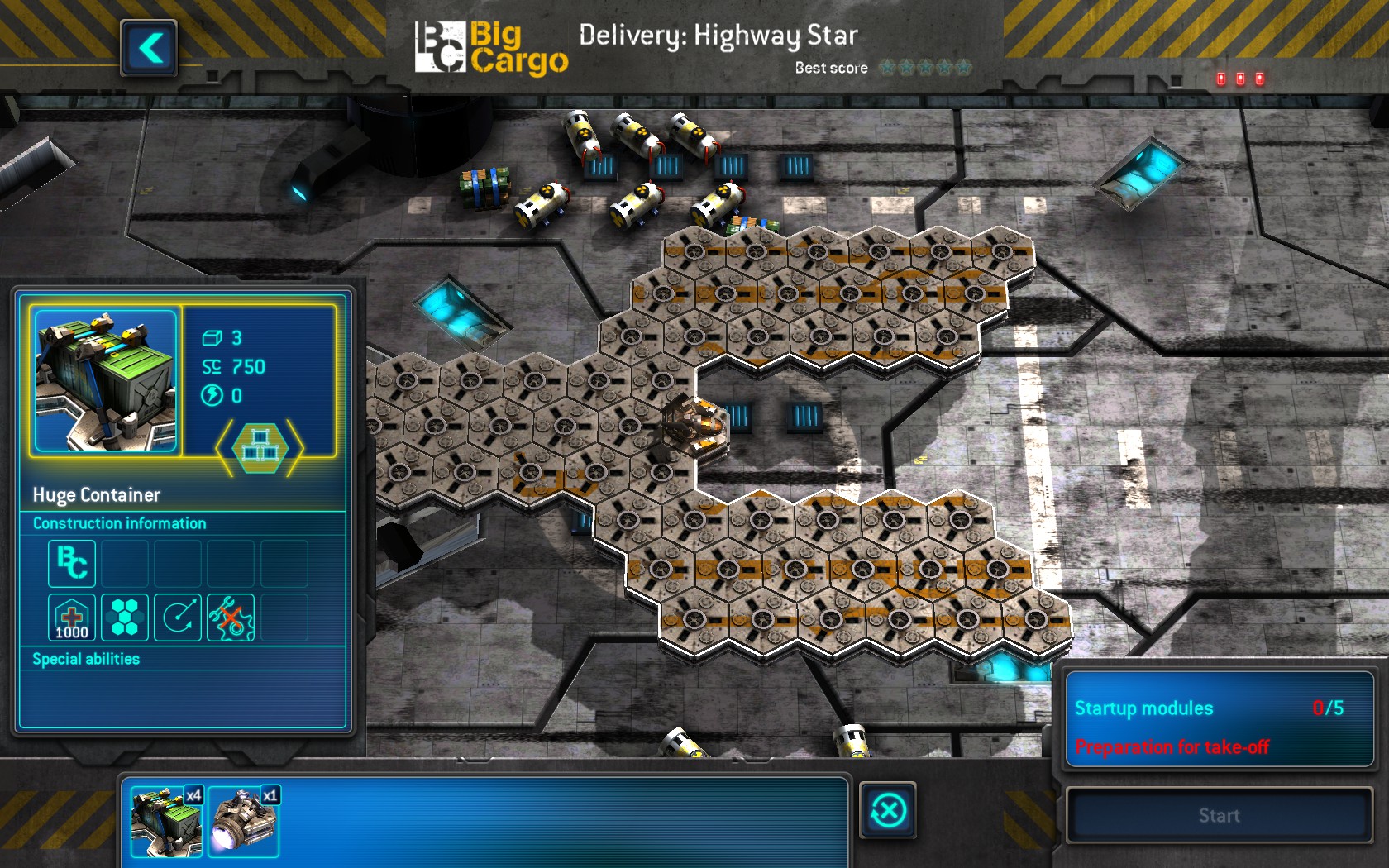 Outside of these variables, game flow is essentially the same across the board. When you start a particular contract, you’re presented with the necessary cargo, a single thruster, and a predefined ship layout, comprised of a series of hexes. Once all the stuff is laid out, you start your flight. Periodically, you’ll get a warning with a quick display of what sort of enemy is inbound, and what path they’ll take (this is fairly standard for tower defense). It’s up to you to decide what to build and where as a result. You start the game with only very basic constructions, a simple laser turret and thruster. But Buck’s reputation as a space trucker grows as you progress through the game, and this reputation unlocks better constructions that serve different purposes. 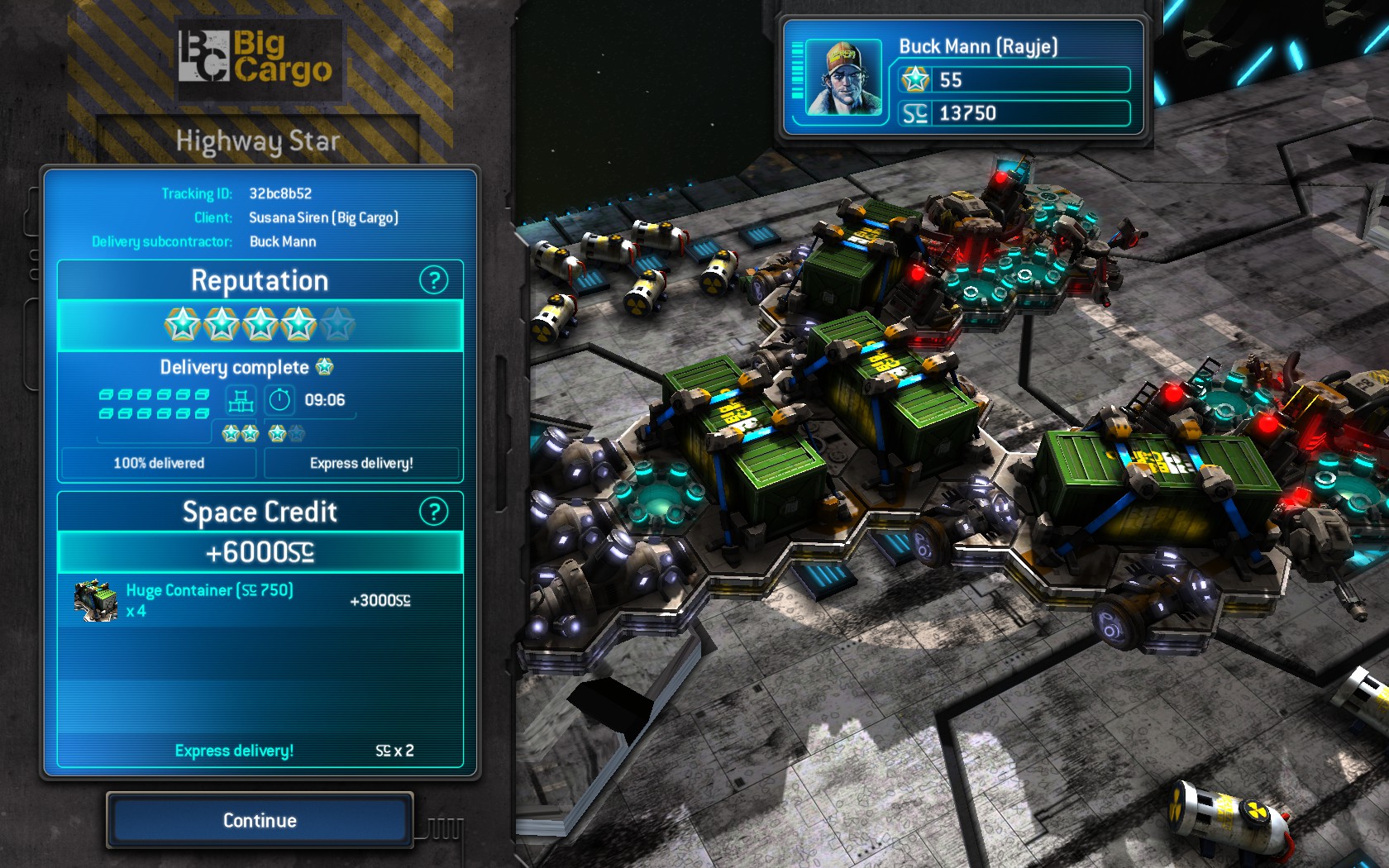 You advance your reputation in two ways: you get one star for finishing a delivery successfully within the time limit, with at least a single piece of cargo intact. If you arrive with more, you’ll get an additional star, and all cargo intact is two, for a total of three. The other two stars are awarded based on how quickly you finish the delivery, which can be affected by the construction of more and better engines in-flight. An express delivery is worth one, lightspeed delivery is worth two, so a total of five reputation stars can be gained from each delivery.

But reputation alone can’t get you the digs, you’ll need money to pick up the blueprints, as well. Each piece of cargo has an intrinsic value, to be paid upon delivery. Your total is then multiplied by two if you managed express delivery, or three if delivered at lightspeed. Reputation can’t be farmed by repeating contracts, once you’ve got the rating for a gig, you’ve got it, but in case you’re having trouble later on and want to expand your repertoire, you can repeat deliveries to get paid again. 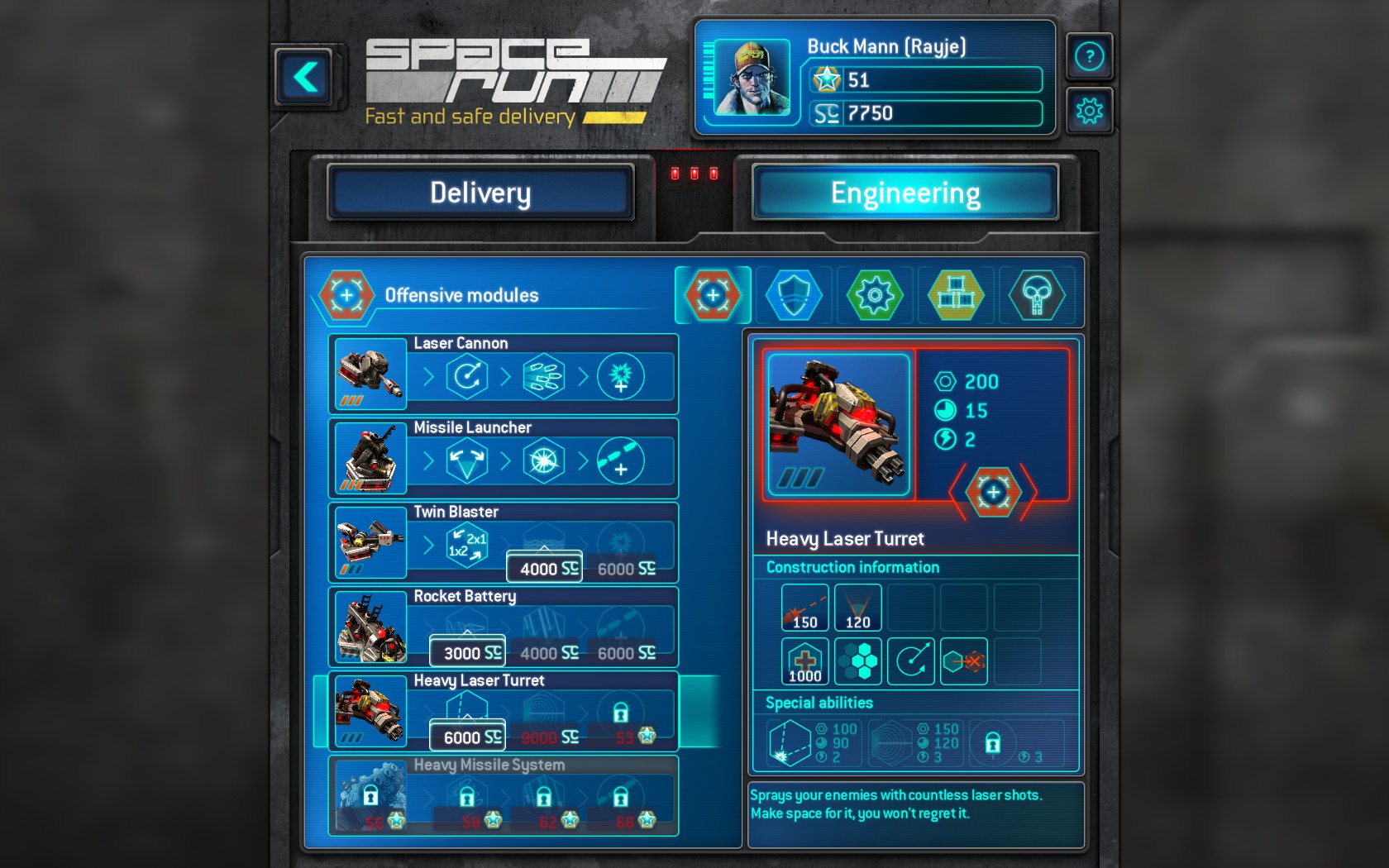 You’ll spend this money not only to unlock new constructions, but to add improvements to existing ones, as well. You basic laser turret, for instance, once upgraded can be reoriented for free at any time, allowing you to adapt to attacks from different directions with clever placement, a second upgrade allows the turret (if connected to a power generator) to enter a rapid fire mode, which essentially triples its firepower. The final upgrade passively increases laser damage by 50%, so long as the turret is connected to a generator. All constructions in the game have three upgrades that can be applied, and each category of constructions has six unlockable entries, all with different sizes, power requirements, and other qualities that make for some pretty impressive looking ships by the end of later runs.

You build pieces onto your ship in-flight using hexnuts that slowly tick up as you go, or that can be collected from destroyed threats. The game has a pretty good difficulty progression: I had no trouble getting five stars on my first three or four deliveries without serious effort, but when it started to really throw serious threats my way, you’ll have to carefully plan for attacks, and occasionally think on your feet to get the job done completely intact. It’s enough to get the blood pumping at times, and has definitely instilled a strong sense of duty into protecting my cargo, I’ll restart a delivery more often than not if I see even a single container go up in flames. 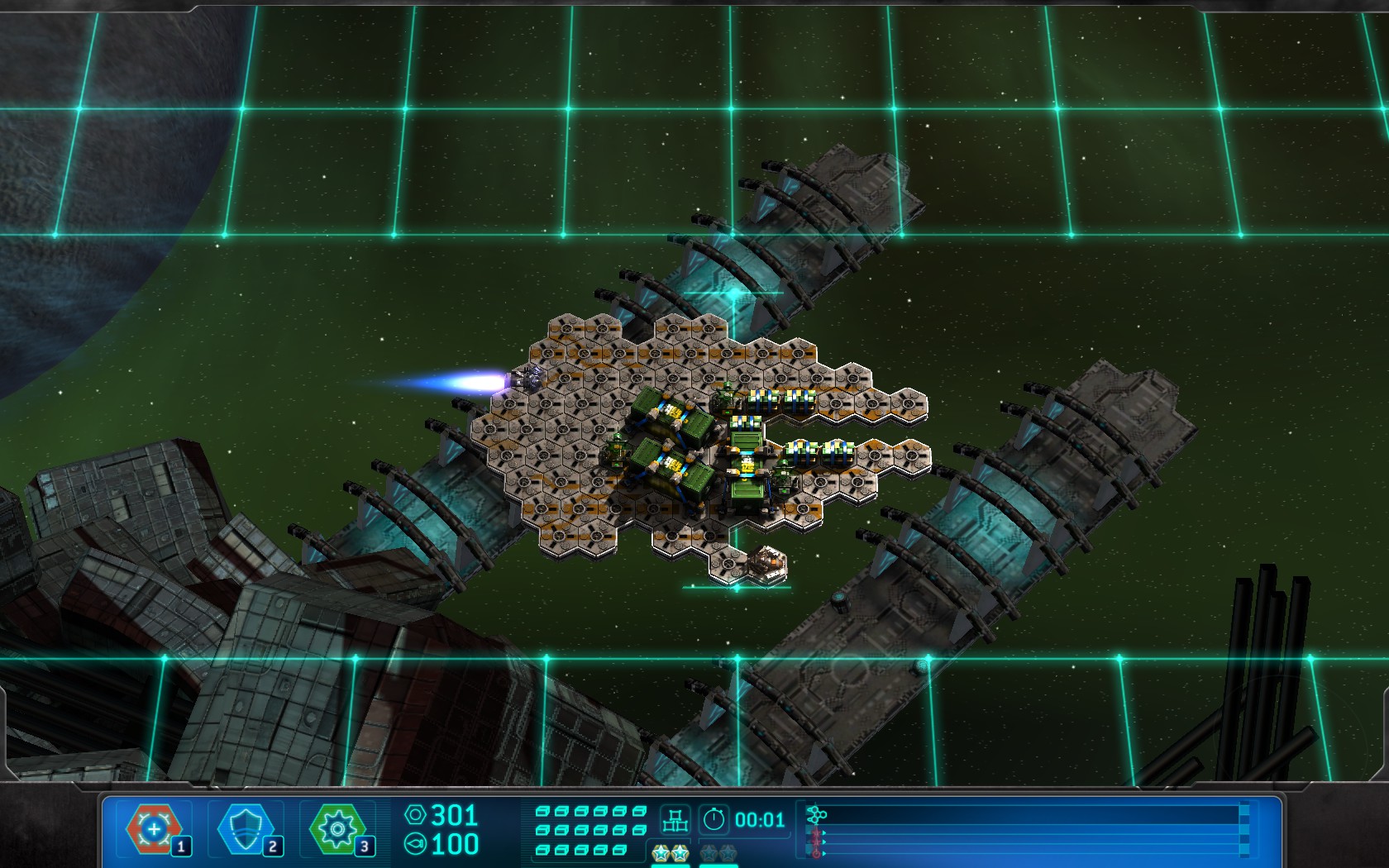 The game’s presentation is simple, but oddly effective, especially considering that Passtech games is pretty much a one-man studio. Early shots had me on the fence about the hex-grid ships, but the more I saw them in action, the more it sort of just made sense, not only from a game perspective, but as a method for building a ship regardless. Every shipping company’s cargo has its own distinct look, and is run by a group of intentionally trope-laden and shallow characters, often to decently comic effect. Buck’s Han Solo-esque musings are cheesy enough to elicit a chuckle, but not so bad as to make me want to play with the volume off. When my heavily armed ship comes under attack by a pirate flagship, watching missile volleys fly back and forth and lasers slamming into the ship is certainly satisfying, punctuated by quips like “Not to be critical, but wow…that was bad,” from my android first mate whenever I lose a turret.

The tower defense genre enjoyed its surge to popularity some time ago, and I got my fill. I haven’t really seen a game that really had what it took to bring me back to it in recent times, but Space Run is a genuinely concerted effort that actually held my attention throughout, a testament to what can really come out of a singular vision from a studio (easy when it’s just one guy, right?) and given enough time. It may not quite be as ground-breaking or genre-busting as it was originally touted to be, but possess enough variety, solid design, and charm to keep you interested, and won’t break your wallet either. 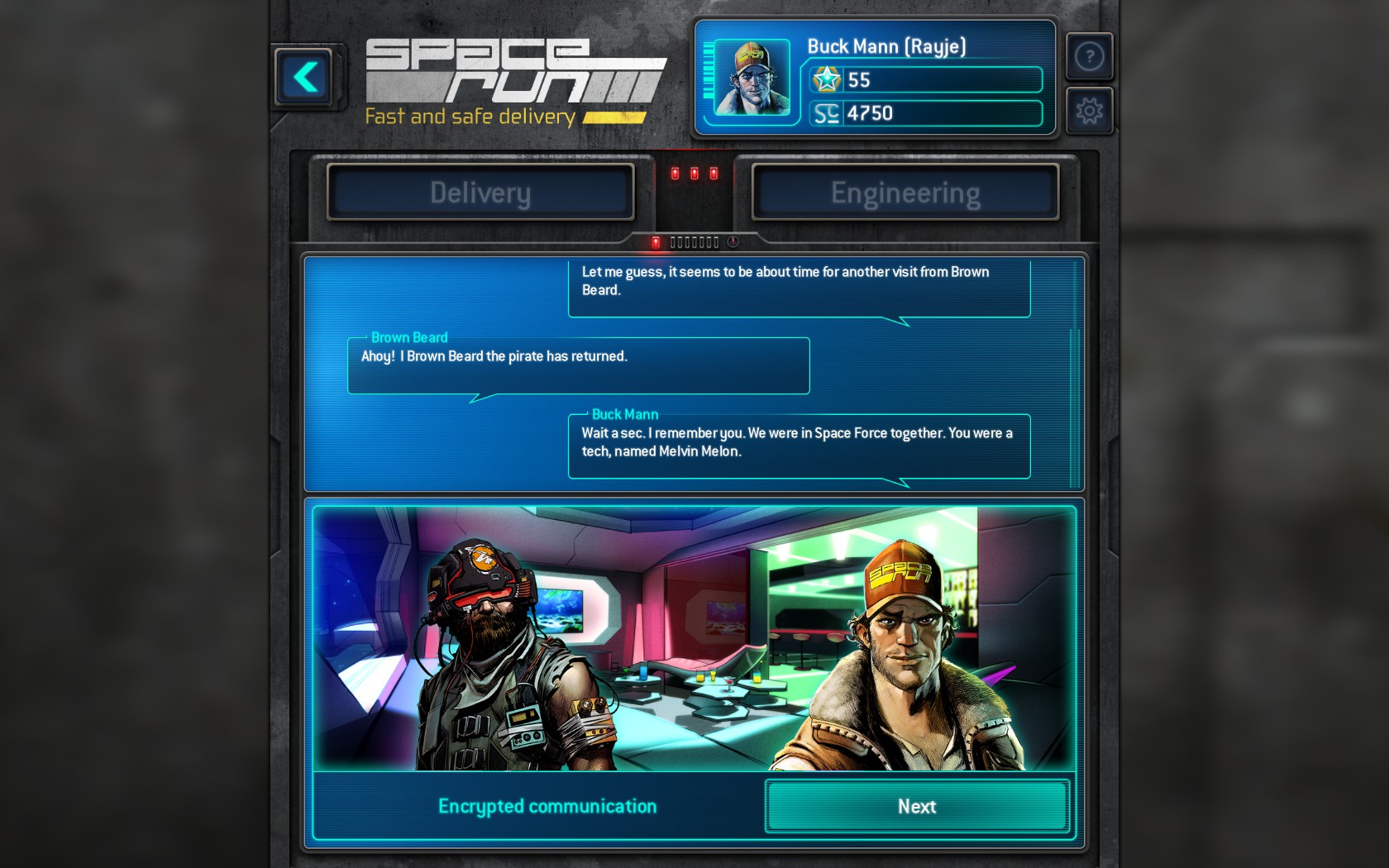 You can pick Passtech’s Space Run up on Steam for $14.99 (it’s currently on sale for 25% off, $11.24). If you’ve ever had dreams of being a space smuggler, but want to stay on the prettier side of the law and transport cargo legitimately, give it a try, it’s cheeky and entertaining, without requiring a huge amount of focus.