Ever since Flappy Bird graced the mobile market, we’ve seen a slew of developers hop on the extreme difficulty bandwagon. Many games flooded the market that were either direct clones of Flappy Bird itself, or completely new and challenging titles with super simplistic controls. Pako, a new car chase simulation title, is the latter. But don’t mistake this free indie game for another dumbed-down genre leech. Pako is perhaps one of the most refreshing  iOS titles to hit the market in recent years, offering gamers a playground that is equal parts addicting and frustrating.

Part of what makes a casual game so appealing is the lack of complexity when it comes to control, but as we’ve seen in titles past, simplicity doesn’t have to mean easy. That word is something that most hardcore gamers usually associate with the casual genre and that can be a turn off for those of you that are looking for a title that will challenge your skills. Pako manages to blend a simple two-control system with very challenging gameplay. It definitely follows the old adage of “easy to learn but hard to master.” Pako is a cinch to pick up, as it only uses a left and right touch control. Putting pressure on either side of the screen will cause your car to turn in that direction, and the vehicle will accelerate all its own. The difficulty scale comes from the fact that you are constantly accelerating at full speed, and each vehicle you use handles in a different way. This can make dodging objects a very daunting experience. 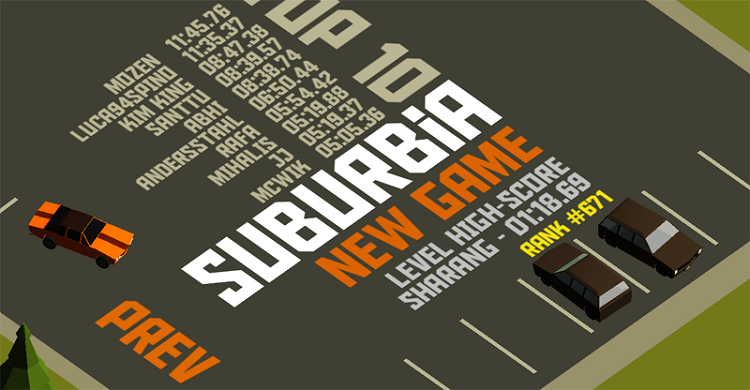 Pako has five different levels to choose from, each with its own specific quirks and vehicle type. The Mall has you racing through a parking lot, avoiding police, light poles, and parked cars, in a small hatchback. From there you move onto Suburbia, tearing through the house-lined streets in a muscle car. You’ll even have a chance to run over zombies (which award you extra points) in a hearse as you make your way through a cemetery. It gets harder from there as you enter a thin highway, forced to dodge and weave through traffic in a old-school surfer van. And for those of you seeking the ultimate challenge, you can dodge tanks and police cars throughout the square, armed only with a small three-wheeler car that has a serious handling issue. Each level comes packed with its own separate leaderboard, so you can vie for the top spot against your friends and family.

The gameplay for Pako is what makes the title so addicting, but the art style is perhaps the most impressive aspect of the title. Some indie and casual games have a severe lack of artistry, especially ones that are beyond simplistic in structure. But the developers behind Pako cut no corners in making sure they had a game that is as fun to look at as it is to play. It’s hard not to get distracted by the slew of modern, yet plain 3D architecture. The color splash, the interesting animations, and the explosions when you strike an object add a lot of depth to what most would consider a very elementary concept. It’s very refreshing to see developers put so much effort into the visual aspect of a title, regardless of how simplistic the gameplay may be. 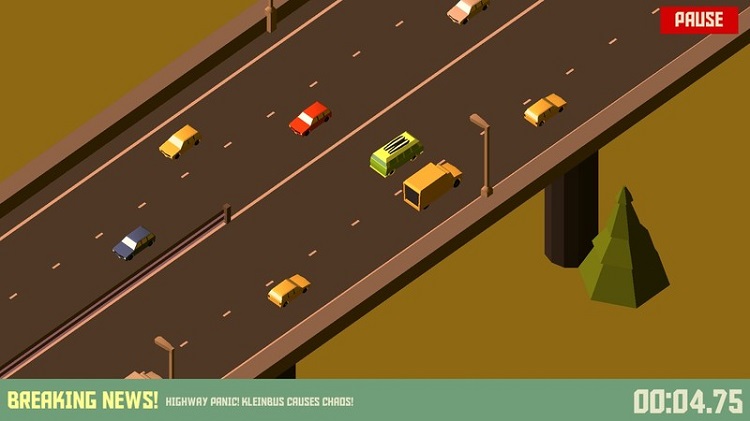 I haven’t been able to distance myself from Pako ever since I grabbed it of the app store. I find myself occasionally picking up the iPad to play a few rounds. It has this innate ability to capture your attention and you’ll keep coming back for more abuse just to squeeze an extra second on your “run time.” But there are some things I wish developers would implement, and perhaps they can add these features in subsequent updates. Different game modes would be fun, like maybe the addition of a demolition derby, or a distance challenge. It would also be nice if we could get status updates on when our friends or family beat our highscores, so we can always be ready to defend or attack for leaderboard supremacy. Hopefully these are things we will see in the future.

Pako is available right now on iOS for 0.99 cents, and it’s definitely a game you’ll want to pick up if you’re looking for something to challenge you for a few minutes throughout the day.