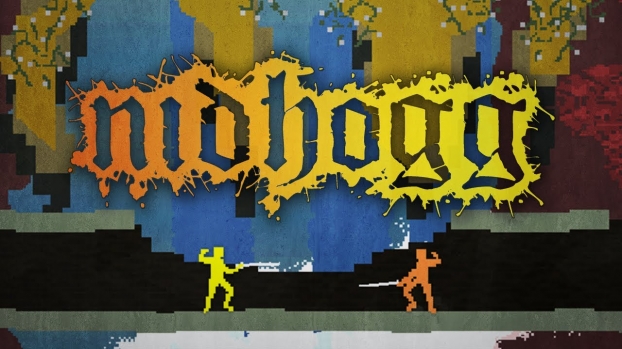 It took me less than three seconds to die in Nidhogg for the first time. It didn’t come after a prolonged struggle or a cunningly-placed strike by my opponent, but rather I ran myself through on their sword. Since then I have suffered hundreds—if not thousands—of stab wounds, broken necks, and terrible falls. However, I never felt cheated or or that my death was unfair. Quite the contrary: every moment of the game was and adrenaline-fueled duel for victory, and a truly fantastic one, at that.

Nidhogg is most easily explained as a Zorro simulator. Every match begins with two sword-wielding figures battling to the death in an arena. If the player on the left kills his opponent, an arrow appears allowing the player to run to the right, and vice versa for the player on the right. All the arenas are symmetrical, consisting of five screens, with only one goal: kill your opponent and run all the way to the end of the stage, where you will be devoured by Nidhogg for… reasons unexplained. Any time a player is killed, the movement direction is set against that player, making the game a constant tug-of-war. 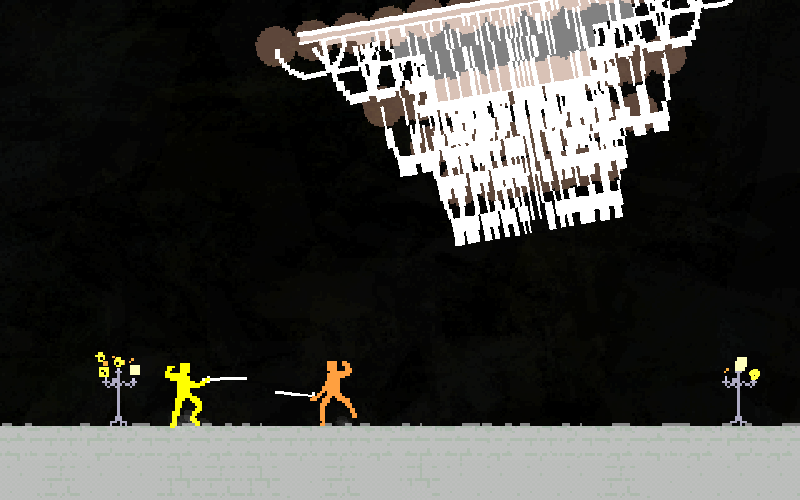 The controls are simple, using only five keys (two players can even play on a single keyboard), but the moveset available is surprisingly massive, and every action you can take fills a role, countering possible moves by your opponent or attempting to gain an advantageous position. The basic moves allow for running, jumping, ducking, stabbing, and altering the height of your sword stance.

The potential from there grows in magnitudes. You could advance and roll under high- or mid-level stances, trip your opponent and break their neck, but they could drop their sword and you’d impale yourself, or jump and and gain some higher ground. You could jump and dive kick at them, but they could raise their stance, or dance backward and throw their sword, killing you before you can recover. You might throw your sword first, forcing them to deflect it in a higher stance, roll under them, and—assuming you killed your opponent last—just run for it and hope for the best. 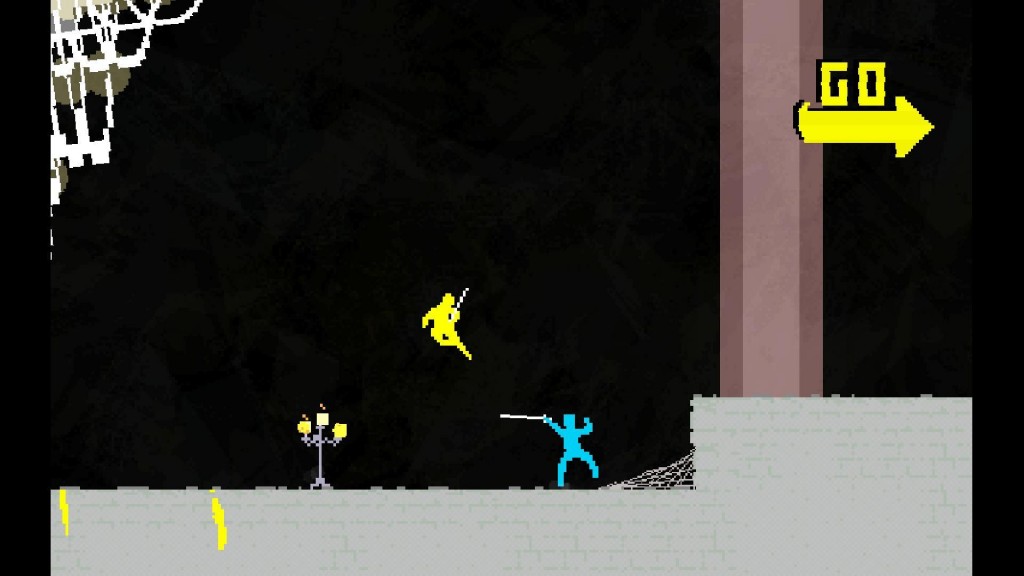 The game oozes sensibility from every pore. Every extraneous feature has been surgically removed, leaving an efficient and extremely effective action game behind. The idea exists in every facet of the game: there are only four stages, but each posses their unique gimmicks and aesthetics to encourage different play-styles. There are no health bars, all deaths are instant, but there is no penalty besides lost ground (killing oneself to spawn in front of a fleeing opponent is completely a valid strategy).

Even the visuals follow this trend. Your character is a bundle of pixels of a single color. The stages are generally free of distractions, but have enough subtle detail to be engaging and dynamic. The fountains of pixellated blood serve as an intriguing heat map of death as matches go on. 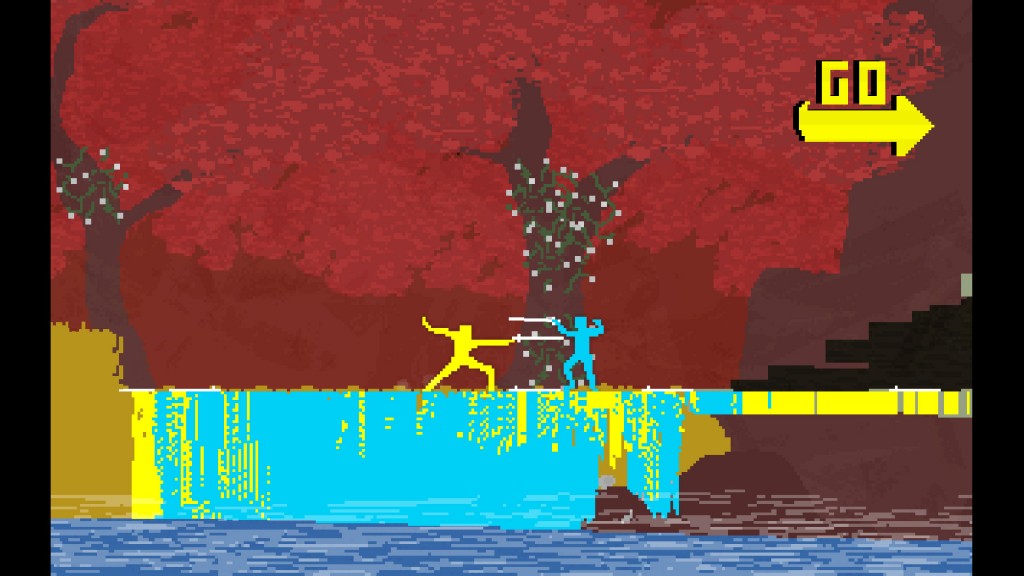 There is no story or explanation of what happens in the game to speak of, there is quite literally nothing to distract the player from the tasks at hand.  The game’s soundtrack is also driving and addicting without being intrusive, a testament to the attention to detail Messhof paid to ensuring that nothing in the game went to waste.

The game can be played against a swath of computer opponents in a time-trial fashion, but the game really shines in its multiplayer mode. Matchmaking is a simple endeavor, you can search for opponents easily, or organize matches and tournaments against friends. The system isn’t perfect, input lag can occasionally result in unusual positioning or prevent certain maneuvers from being performed correctly, but does a good job of retaining the speed necessary to keep matches from becoming a chore. The most fun comes with playing with someone in the same room. Matches of Nidhogg are entertainingly rage-fueled endeavors, and I consistently came away satisfied with the results of my matches, good or bad.

It’s easy to see why Nidhogg earned so many awards for excellence in game design. The game is exudes accessibility without sacrificing depth. I couldn’t in good conscience call the game perfect, but the focus embodied by the game makes it something that every gamer should experience.

Nidhogg is available for PC through Steam or at nidhogggame.com for $14.99. I strongly recommend you give it a try. Check out a trailer below.