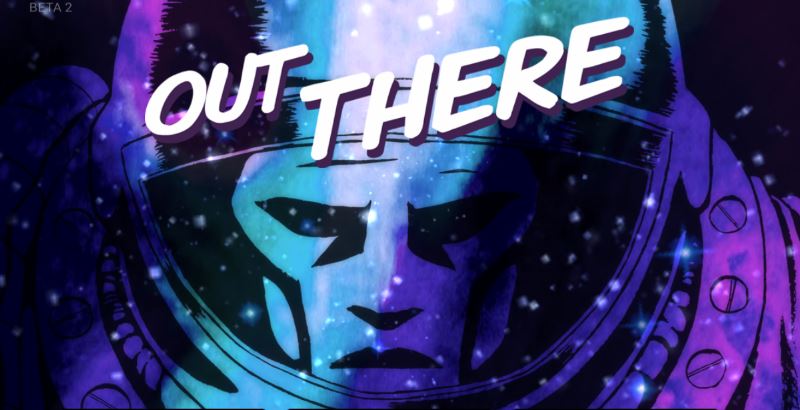 Mobile Review: Out There

Sci-fi has a tendency to gloss over how unfathomably vast it is. Passing mentions of the time that passed while in warp might suffice in many cases, but to truly capture that feeling of emptiness is another thing altogether.

All the more impressive that Out There manages to do this on such a small screen. This little game, developed by Mi-Clos Studio, flew in the face of most of my expectations for mobile gaming, delivering an oddly chilling and uniquely challenging experience that I tend to assume the mobile markets will ignore. While so many games are focused on endless running or throwing living ammunition at precariously constructed fortresses.

Out There is the story of a space faring traveler coming out of cryonics. After Earth’s inevitable resource starvation, mankind took to the stars. But in this game, man has not yet reached the edge of the galaxy. Our traveler is an astronaut aboard the Nomad, a passenger line that connects Earth to a moon of Jupiter. Upon coming out of cold sleep, the voyager finds himself in unknown reaches of space, alone. 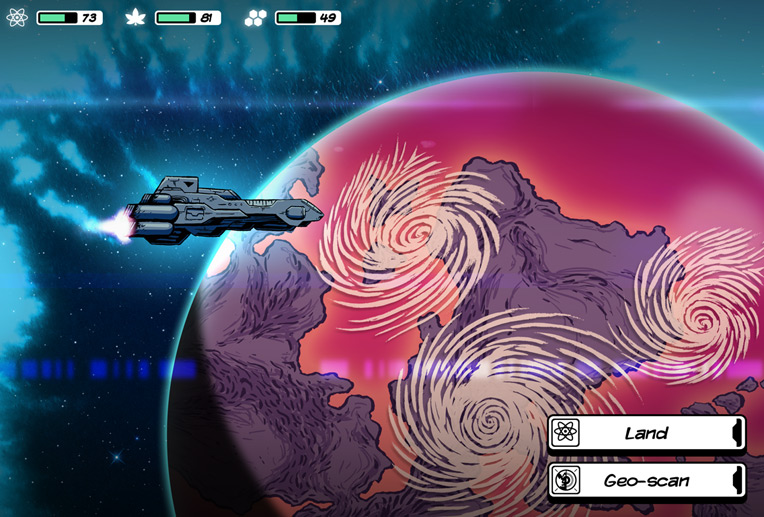 The game is fairly simple to play, but oddly deep in execution. You fly from star system to star system, visiting various planets to acquire the resources needed to keep your ship in repair and fueled. Along the way you’ll find space stations and encounter alien life, learn new technologies, and encounter cosmic events seeking to prevent you from returning home.

Your first encounter is a mysterious alien space station. There you learn of an alien technology: the space folder. This allows for extremely fast travel over impressive distances, which facilitates travel between stars. But in order to build it, some resources are needed. You end up dismantling your cryochamber in order to salvage the necessary pieces to get flying. The beacon that shows you the space folder also indicates a star in the deep reaches of space: your destination.

Game flow is pretty simple, you’ll check out your interstellar map, and select a star in range. These can range from collapsed black holes to blue dwarfs, neutrons stars and supernovas. Most of the time, the stars are surrounded by a combination of rocky planets—a good source of minerals, and gas giants—planets with dangerous orbits that can be probed for gases. From these planets you acquire three of your primary materials: hydrogen, helium, and iron. The two former are used to fill your fuel tanks, the latter for repairing your hull and most of your basic subsystems. A third resource, oxygen, is needed only because breathing is crucial to staying alive. In addition to these elements, you can find many others that are used in the construction and repair of new technologies. 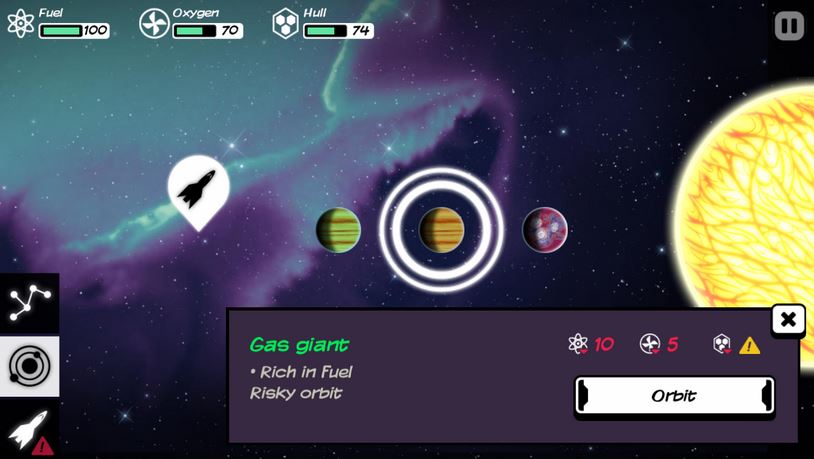 Every planet has limited amounts of resources available, and it takes fuel to acquire them, so it can be beneficial at times to skip over planets that may not provide as much of what you need, lest you encounter a shortage of a different resource soon afterward. The always-looming possibility of death draws a strong parallel to the modern rogue-likes of today; the same can be said of the elements of permadeath and the randomly generated set of systems you end up traveling through. Your cargo space is also quite limited, forcing you to consider everything you bring aboard—inevitably you’ll find a fancy new technology that you had the resources for, but threw away to make space for some lifesaving oxygen.

More rarely, you’ll find alien space stations (which instantly max out one of your three primary resources), inhabitable garden planets (inhabited by alien life), and beacons from abandoned ships (which can be occupied, giving different cargo layouts and having technology you may not yet be able to craft). However, these must also be considered carefully, if your fuel is low you may not be able to collect sufficient fuel at, say, a garden world, then take off and fly to a nearby gas giant in order to refuel. 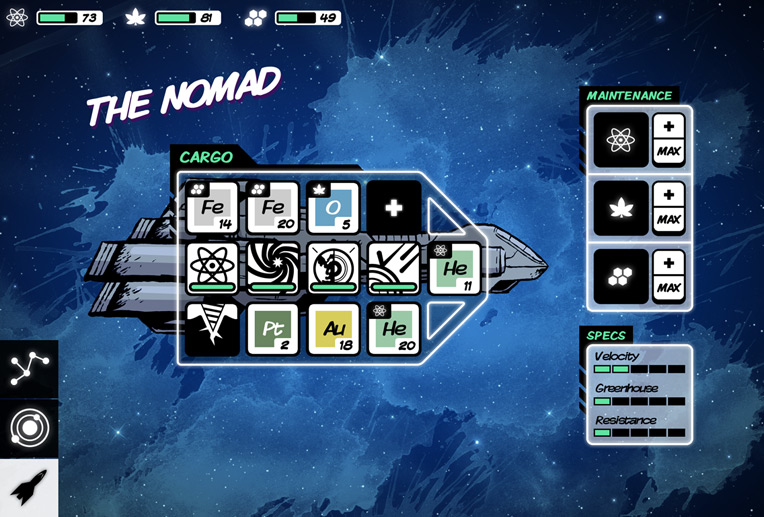 The wide variety of technologies available will also drastically alter how you approach the game. At first, you have a basic technology suite: an interplanetary reactor for intra-system travel, a drill for mining, a hydrogen probe for locating pockets of gases, your space folder for inter-system travel, and a telescope for identifying faraway systems. While at first, you can identify a type of star and the amount of resources it will take to reach, you might eventually have advanced scanners that allow you to see what kind of objects surround a star, a geoscanner will let you see what sort of materials a planet holds, and a generalization of their quantities, removing some of the guesswork from mining and probing. Still others might make your ship more damage resistant, allow you to detect hidden alien fleets, expand the range of your space folder, or allow for travel through black holes.

Encounters with alien life, while rare, can also affect your travels in a variety of ways. Every encounter with these aliens (and a few other events) will slowly reveal words from their language. Proper interactions will often lead to learning new technologies or help you to acquire a rare Omega element which can repair any system on your ship, should the need arise. 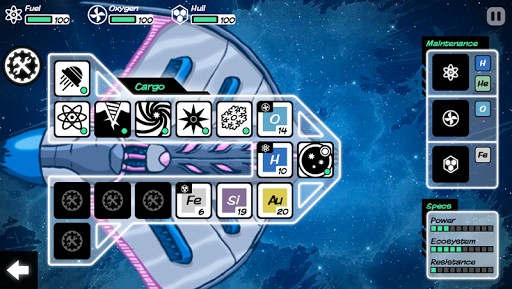 Visually the game isn’t too much to write home about, most of the interface is fairly minimal, which adds to the overarching sense of loneliness that pervades the game. Interacting with your cargo and your technologies would be familiar to any player of Diablo or its contemporaries, dropping a relevant material into one of your resource slots will consume those materials and add them to your resource meter. Everything in the game is otherwise a standard sprite or image, there isn’t much animation to speak of, but it in no way detracts from the experience.

And the experience is what really makes the game, in the end. While many of elements of the game are, on their own, well executed, the way they come together with the theme of being trapped out in space is how they really start to shine. Every jump is rife with possible dangers, random events on jumps might damage your systems or drain a resource (though they can also grant resources or new technologies, though this is much more rare). The voyager leaves oddly poignant and occasionally depressing journal entries as they spend months—even years— on this ship, alone.

The game released back in late February, and is $3.99 on the Play Store. It really is a worthwhile addition to any mobile gaming library, with a unique experience, good writing, and a challenge that many mobile games have a tendency to ignore.