Metal Gear Solid: Ground Zeroes – The Start Of Something Different?

The Metal Gear series undoubtedly carries one of the most complex and admittedly convoluted storylines in gaming. The rise and fall of Big Boss, The Boss’s supposed betrayal, the questions of the nature of one’s existence especially as it relates to an artificial being, and the monetization of war are pervasive themes, ones that have remained relevant throughout the games 25 year cycle. After a traditional Kojima sleight-of-hand trailer, the newest game was revealed: a grittier, more brutal Metal Gear than any before it, complete with a new engine and a massive gameplay overhaul. The Phantom Pain‘s prologuechapter, Ground Zeroes, released recently. But is it a deserving beginning to a new, numbered entry into the Metal Gear legacy? 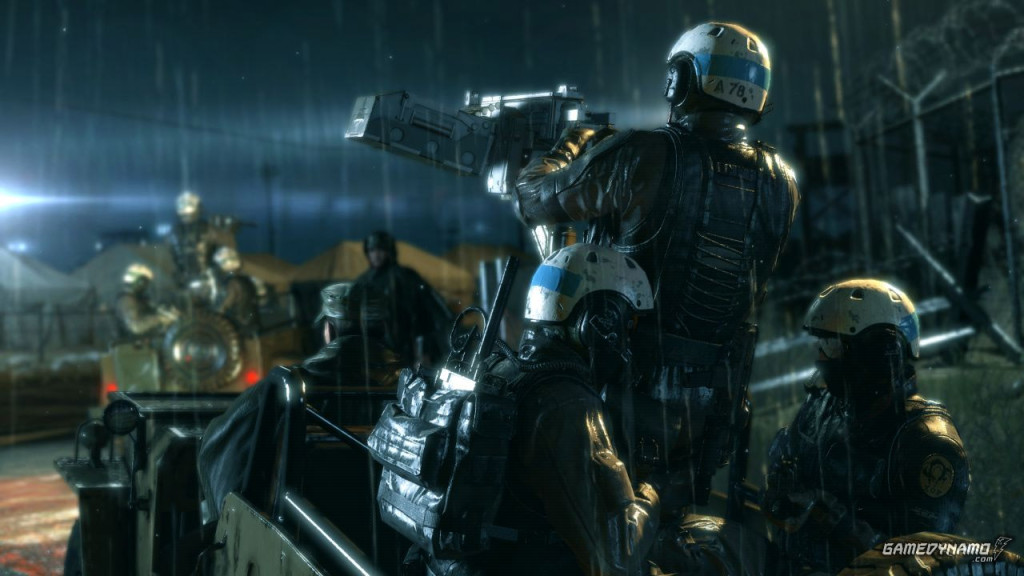 Ground Zeroes picks up several years after Big Boss’s construction of Mother Base and the subsequent creation of Metal Gear ZEKE, and MSF’s acquisition of a nuclear warhead. If many of those terms are lost on you, don’t feel bad. Peace Walker was the PSP entry in the series, fairly recently rereleased on consoles as part of the Metal Gear HD Collection. Given the way that past mobile entries of the series have been received, Peace Walker was approached with caution. The game proved its mettle, however, making the appropriate sacrifices for its platform without sacrificing story, and introducing new elements that fit in with that narrative expertly.

Ground Zeroes takes no chances, including a quick summary of the events of Peace Walker accessible from the get-go. Though swift and shallow, it gets the job done, in most minimal sense. Therein lies what I feel is one of the problems of Ground Zeroes: it fails to stand alone. I feel like this is more acceptable than it would be in any other circumstances, considering the limited nature of the game. Approaching Ground Zeroes as a large-scale minigame of sorts that also happens to provide the foundation for the upcoming Phantom Pain, then you’re bound to garner more enjoyment out of it. 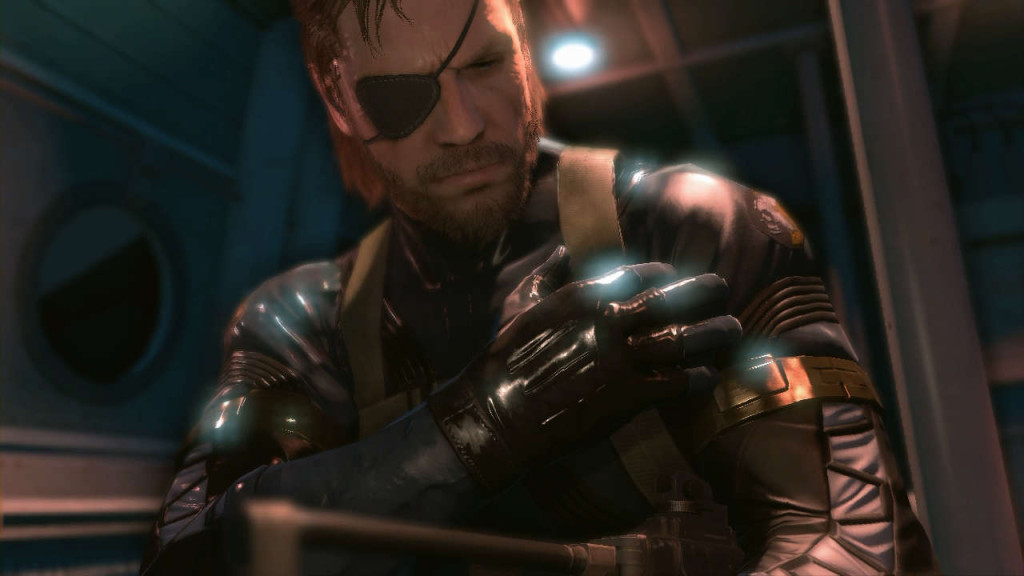 Essentially, Paz (from Peace Walker) may have leaked to the international community that MSF possesses nuclear launch capabilities. The IAEA demands to conduct an inspection of Mother Base to determine if such claims are true. Against Big Boss’s judgment, the inspection is allowed to continue, with the intent to hide Metal Gear ZEKE and the nuke deep in the ocean. MSF recruit Chico, having learned that Paz might still be alive set off to rescue her alone, and was likewise captured in the process. Big Boss sets off to conduct a rescue attempt while also recovering Paz in order to obtain any information she might have about the various agencies working against MSF. And believe me, that’s the heavily simplified version.

Where most Metal Gear games are twenty-or-more hour endeavors (when including cutscenes), Ground Zeroes is understandably shorter. Steel yourself for a quick finish, though, my first playthrough of the game took about seventy minutes. Though many reports had come out about the length of the main story, I still found myself shocked at its brevity. That being said, I’ve dedicated upwards of ten hours to the game as a whole, and my completion rating has been sitting somewhere around 35%. Every mission has two difficulties, with a number of extra trials included to extend playability. There are enough hidden little collectibles to keep you rooting around the little prison camp for a while to collect as many recordings as possible to give yourself the strongest possible base of information for the upcoming game. 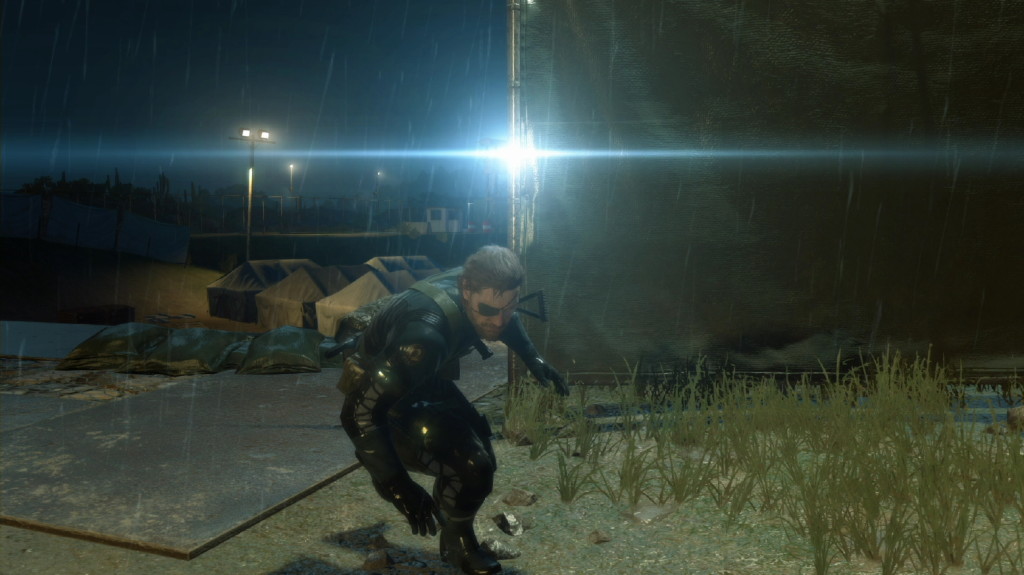 Just as Snake Eater traded in tight metal corridors for open jungles, Ground Zeroes has exchanged the enclosed zones for a single, open area. Gone is the constant interchange of camouflage, and the amount of equipment carried is significantly more limited than it was previously. Also missing are the psyche/stamina gauges made popular in recent entries. Even the life bar is curiously missing, replaced with the more modern regenerating health total represented by a washing out of colors and esoteric film tears.

The open environments shift the focus from focused avoidance to large-scale situational awareness. Binoculars are no longer an equipped item, but have a dedicated button. Focusing your attention on any person or significant object marks it permanently, allowing you to track enemies and potential risks or useful implements over large distances, even letting you track specific enemy positions and facings through obstacles if you’re close enough.

At the same time, it has become more difficult to keep eyes on your targets. I haven’t decided yet if this is by design. If you’re crouched behind a waist high obstacle, you must stand up or sidle around the side to use your binoculars appropriately. You might be able to quickly peek over cover or around a corner to mark a nearby enemy, but the range of the basic zoom isn’t particularly large. You have to take risks at times in order to ensure you’ve got your full bearings. 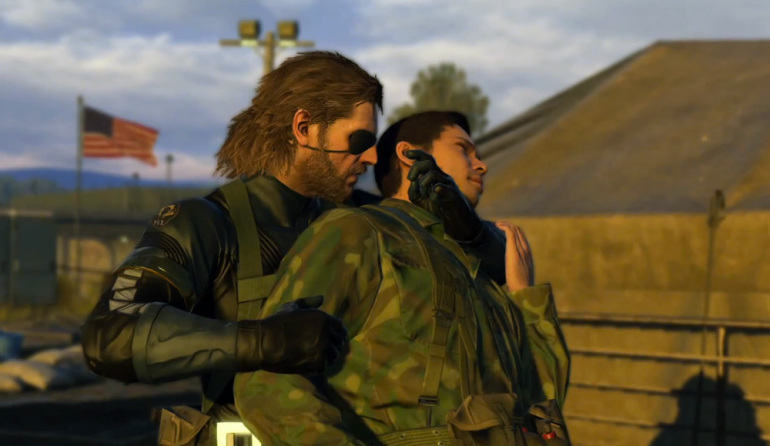 This all comes with a generally increased sense of speed and action. The game affords a very good sense of control over just how carefully you want to approach your objectives. Transitioning between stances has become significantly smoother than before, and a new “quick dodge” action now has a dedicated button, allowing you to not only dodge enemy fire, but also gives a last-ditch opportunity to avoid detection.

They’ve also included a cover system, but have suffered from the pitfall of not assigning this function a button. Detection on this is spotty at times, and has led to more than a few alerts from my enemies. Similarly, trying to crouch into small drainage channels or vents ended up with me standing up in a visible location rather than entering said vent more often than not. Controls are otherwise responsive. Utilizing your iDroid (aka your map/information center/pseudo-pause screen) does not pause the action, if you are noticed and need to extract a prisoner ASAP, you need to reach cover, then use the iDroid to request an exfiltration.

There is a second-screen companion app for the game which essentially converts  your smartphone screen into an iDroid screen, affording all the same functions, as well as a live updating map. Prisoner extraction isn’t as simple as using a fulton extraction on them (though apparently this will make a return in Phantom Pain) but for the most part, movement and traversal of the environment has been dialed up, though any indicators of just how noticeable you are have been removed.

The addition of auto-aim and the like have, for all intents and purposes, widened the divide between the pure stealth and pure action elements of the game. You’re simultaneously more vulnerable to damage but more able to deal death. You’re less aware of how easily you’re perceived, but more easily able to keep track of your foes. 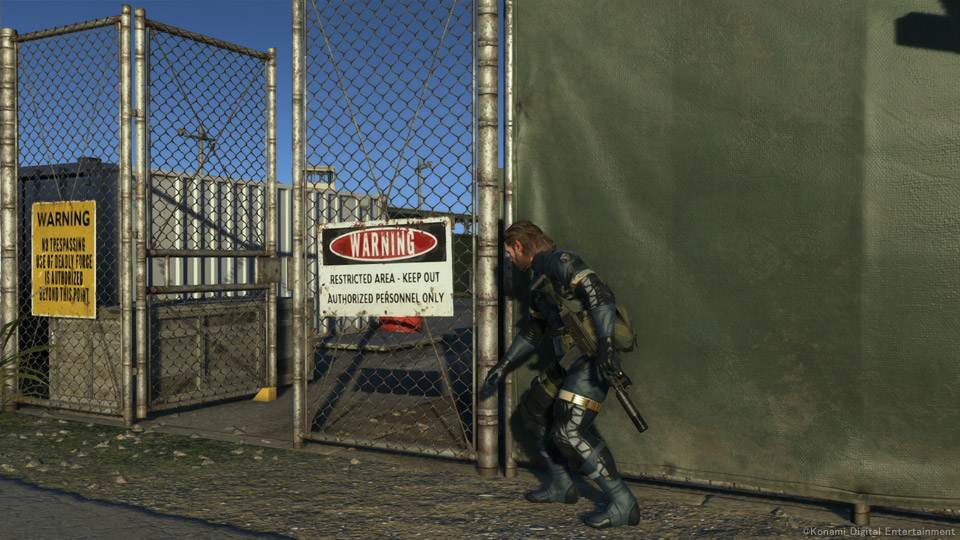 The game is also the debut of Kojima’s long-touted Fox Engine. Unfortunately, I haven’t been able to yet procure myself a PlayStation 4, so I’ve been playing the current (see: last) gen version of the game. That being said, the visuals are pretty impressive, considering. The way the environment reacts to the various lighting and weather conditions is very impressive, giving the same area a very different look and feel when it’s raining and dark compared to a clear, sunny day. Character models are similarly finely crafted, with animations to match. CQC is significantly faster (maybe almost too much so) and feels like it packs a much higher punch than before. Snake’s various stance transitions have been streamlined, as well. On the PS3 version, the shadows can sometimes come out a little muddy, especially when viewed over characters’ faces.

The other major complaint on the visual end—on the PS3 version, at least—is that the frame rate for most of the game is capped at 30 frames per second, and has a tendency to dip below that when pressed. While most of the artificial textures and the like are attractive, the natural grassy ground texture is a little bland. The game also has one of the most captivating representations of gore I’ve seen in a game in a long time. All-in-all the engine is certainly a step up, though it may not be optimized yet. I’ll withhold final judgment for the day I have the PS4 version of the game in my hands.

Ground Zeroes is far from the pinnacle of Metal Gear as we know it. The limited narrative and bold design decisions will require a bit more of an effort to really get, I think. That’s not to say that the game isn’t any good, it can certainly be considered more than a demo, but not a whole game. It fits the “prologue chapter” bill pretty well, but that only came after finishing the main story and delving into the side-ops.

As big a Metal Gear fan as I am, I’m not sure the price tag is justified, either. The game is available on current- and last-generation systems, both digital and physical copies. The digital versions on the Xbox 360 and PlayStation 3 will run for $19.99, with physical copies coming in at ten dollars more. Xbox One and PlayStation 4 versions are $29.99 physical and for now, the same for digital. In the end, I say keep an open mind on this one, and make sure you look beyond the main story to get your money’s worth out of this one. It takes some getting used to, but so long as Kojima listens to player feedback and perhaps makes some adjustments for The Phantom Pain, I think we’re on a good track.