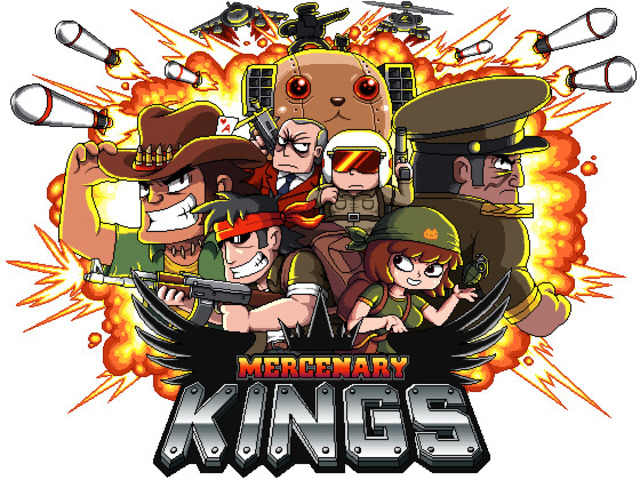 Mercenary Kings is a strange beast. It’s like the unusual lovechild of the aging, but still strangely attractive Metal Slug and its sleek, modern boytoy Borderlands, but being raised by the GGG Contra after Borderlands refuses to take custody of the child.

Let me explain: You play as the Kings, a batch of mercenaries that were sent to Mandragora Island to defeat CLAW, a strangely Nazi-esque group conducting strange experiments in advanced technology and some-such. In the process, you die, but are revived with the help of a special Mandragora serum, developed by CLAW to make super soldiers. And that’s about where any semblance of plot lies. You have a cast of kooky characters that are little more than hyperbolized caricatures (Cute female weapons specialist? Check. Caffeine-addicted, one-eyed general? Check. Australian blade expert and all-around outdoorsman? Check. You get the idea), with a lot of gaming and pop-culture references that are entertaining, if not particularly fulfilling. 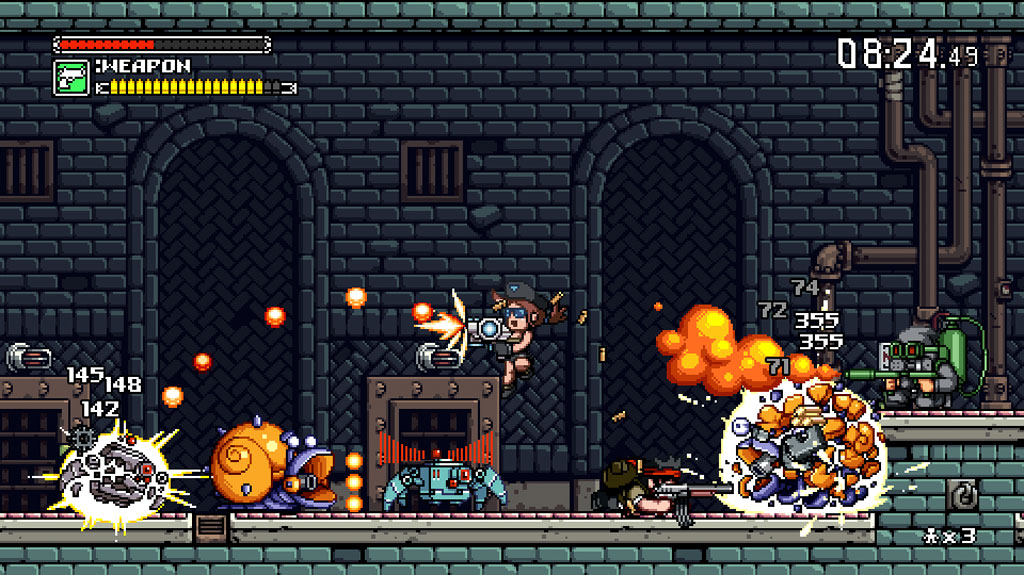 The game is plays like a slightly less-tuned Metal Slug. There are enemies about, you need to kill them with guns (or knives, as appropriate). You can aim in four directions, and there are some light platforming elements. The game follows a pretty regular pattern: you run around your base camp, which is populated with the aforementioned colorful bunch of characters. You take a mission, and perform some sort of time sensitive task with a variety of objectives: meet a particular NPC, kill a certain number of a certain type of enemy, collect a certain number of items, nothing particularly intriguing. 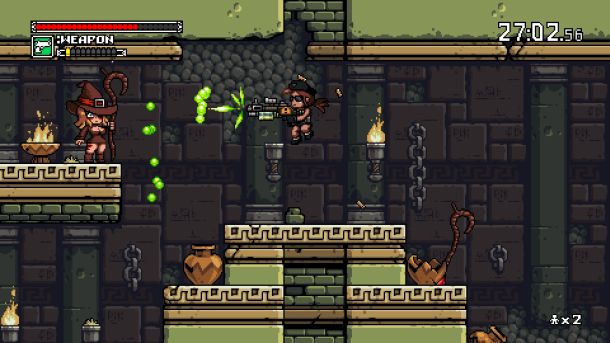 The more original aspect of the game comes with the Borderlands-esque RPG elements that have been introduced into the game. Various materials can be found from enemies or in various crates. You bring these materials to base and use them to craft various gun parts, which can be mixed and matched to create a unique weapon with different characteristics. You can make a nice, well-balanced pistol, a quick-firing assault rifle, a hard-hitting, short-range shotgun, or a high-damage, low-capacity magnum, for example.

You’re not limited to these archetypes, however: you might have a magnum receiver with a machine gun magazine, a sniper rifle barrel and sight, and a shotgun stock. Every mod alters the stats in unique ways, and results in a gun with a unique appearance. Every wanted to kill enemy soldiers with a shotgun that has a trombone bell for a barrel, and a toilet tank for a sight? Go ahead, knock yourself out. Keep in mind, however, that heavier guns can slow you down. High damage is often tempered by short range or low accuracy. Higher capacity generally means lower damage. Some mods can be quite powerful, but are always balanced out, there’s a constant give-and-take with your equipment that keeps you from overpowering yourself too easily. 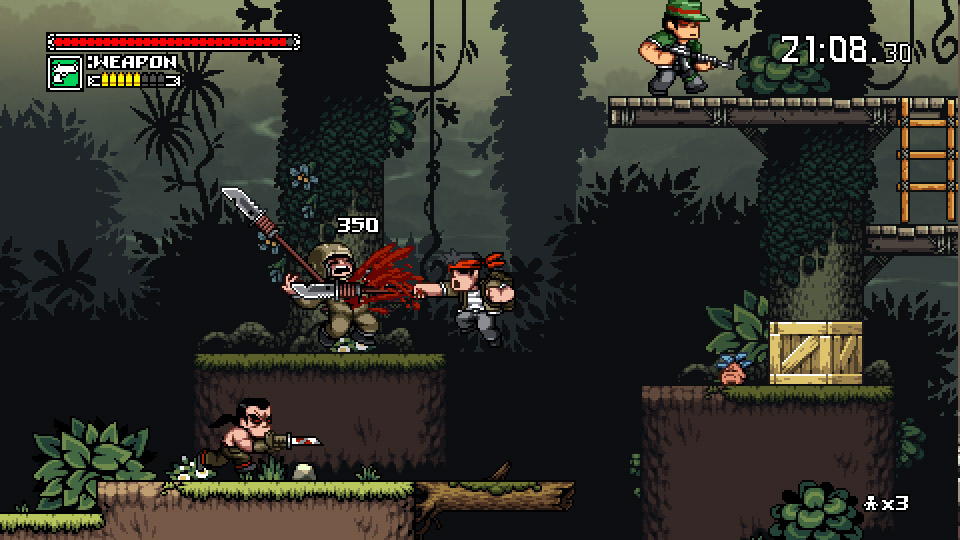 The visuals also add a lot to the game’s charm. Paul Robertson’s work is immediately recognizeable (If you’ve played Scott Pilgrim Vs. The World you know what to expect from Mercenary Kings), and the game bleeds style from every poor. The animations are smooth, models exude personality, even minus dialogue, and the game manages a good sense of humor within its somewhat limited scope.

Technically, the game is functional, but it doesn’t translate as well in all spaces. When things get hectic, the game has a tendency to hiccup and cause issues. When things aren’t hectic, the game can still suffer from the occasional inexplicable slowdown. The game suffers from fewer of these issues on PC over consoles, but the tradeoff is that the controls are clearly suited for a gamepad or controller. The keyboard controls can be remapped, but in the end, it just feels clunky, and is unusually difficult. Several functions that should have been intuitive are not, like menu navigation. Usage of in-game tool selection require too many simultaneous key presses to make normal sense on a keyboard, as well. The game was clearly a console game ported to PC with little adjustment. There are even still controller button icons in the game, though there is no native gamepad support for the game.

The game includes a multiplayer mode that, with a little luck, does increase the fun factor by quite a bit. It’s difficult to communicate with your teammates, so random allies can be a bit of a mixed bag, but having an open channel makes coordination fun, but the potential for griefing is high, take these interactions with a grain of salt.

The barrier of entry on the game, I feel, is oddly high. Many of the systems aren’t clearly explained and this can work, if the player is of the right mindset. The retro feel is evident, any veteran of an arcade will feel right at home with the limited health and time limits imposed upon the player, as well as the gameplay style; the modern gamer will appreciate the customization made available to them, as well as the game’s strong sense of style. 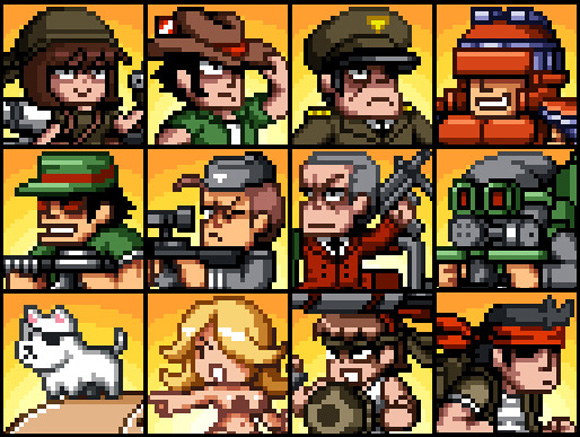 I can’t recommend Mercenary Kings outright. If you don’t have a PS4 to play it on, the game can be pretty clunky. Multiplayer can prove difficult, and for the uninitiated, it’s tough to know what you’re doing, at least at first. While the characters and the visuals are chock-full of personality, even if the narrative is generally lacking. Retro gamers will feel right at home with Mercenary Kings, take of that what you will.

Grab Mercenary Kings by Tribute Games on PlayStation 4 or Steam for $19.99. Expect a Vita version sometime in the future.