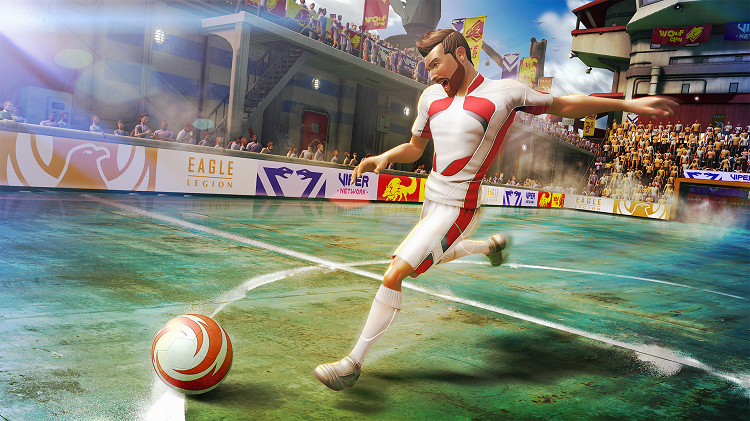 Kinect Sports Rivals has some pretty big shoes to fill. We haven’t seen a family friendly multi-sport and mini-game package grant much success since the Wii Sports series appeared back in 2006. But Microsoft has the potential to reshape the genre with its innovative Kinect peripheral, and ever since its introduction in 2010, we’ve been curious as to why a “Kinect sports” title never appeared on the market. It’s better late than never, and thanks to veteran developer Rare, we’ve finally got a Kinect-based sports package.

Gone are the days of blobular, armless avatars with painted faces. Kinect Sports Rivals features fully animated characters that resemble a variety of human shapes and sizes. It makes it much easier to immerse yourself into the action when you’re following along to the movements of an actual human shape, even if the characters appear a little cartoony in some aspects. But comparisons to Wii Sports aside, or any other sport-packed titled for that matter, Kinect Sports Rivals is a work of art. The game itself is a color explosion, with bright, vibrant outifts, and unique, colorful props. From largescale items like Waverunners, to smaller objects like bowling balls and tennis rackets, each item mimics its real world counterpart well and provides a visual boost to each sport. 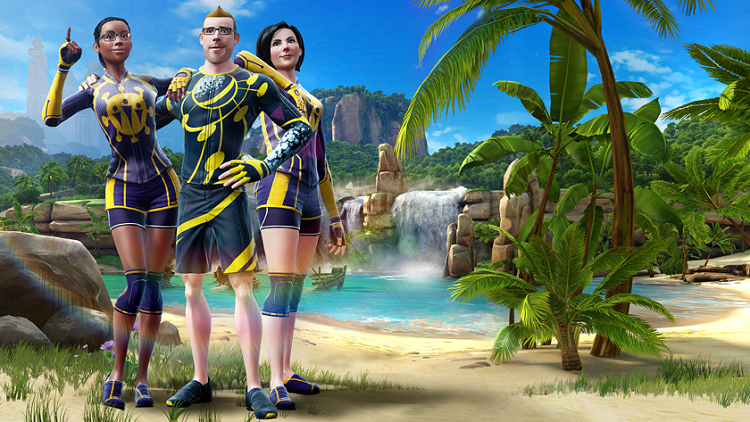 Kinect Sports Rivals takes place on an imaginative island filled with thousands of entertainment hungry fans and an abundance of competitive players. But this isn’t just some drab backdrop that gets pushed aside in favor of motion control and fast-paced action. Each environment stays with the island theme, encompassing a mass variety of palm trees, rocky mountains, and crystal clear waters. It’s very refreshing to see backdrops that are fully animated, immersive, and visually pleasing, and although the main focus of this title are the user-controlled sporting events, developers didn’t skimp on the locale in any way. Cheering fans, flashing lights, and the subtle blow of an island breeze are just a few of the minor visual details that you’ll find yourself distracted by. 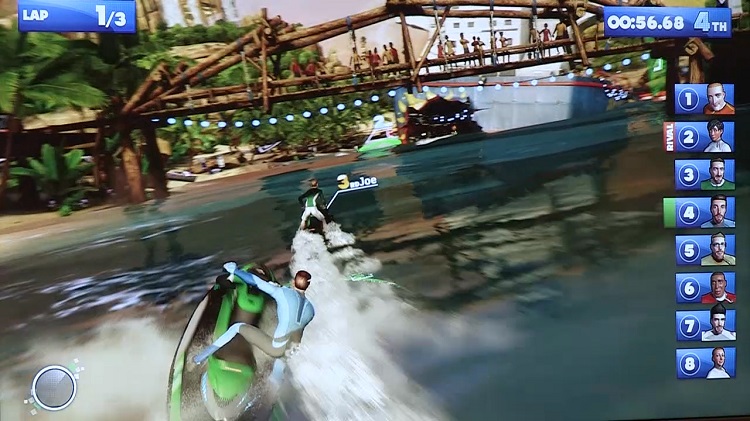 One of the more impressive visual aspects are the player and character animations. The joints, movements, and flow, between you and other players are smooth and well-crafted. Unfortunately, there are moments when the animations can be a little off, or appear to be stretched or awkward. This is to be expected though with motion control, since it can be difficult for the camera to accurately track an individual who is moving sporadically. All in all, the animations track quite well, and the minor ticks that occur won’t take away from the overall visual experience.

One might assume that the sound quality for a “party” game such as this would be a rather drab or hastily tossed together. However, like its visual quality, the sound experience for Kinect Sports Rivals is a welcome surprise. The title features a great soundtrack, filled with a range of Top 40 hits and a variety of modern songs. The music for each stage, as well as the title screen and any accompanying menus, features tracks that will get your blood pumping. 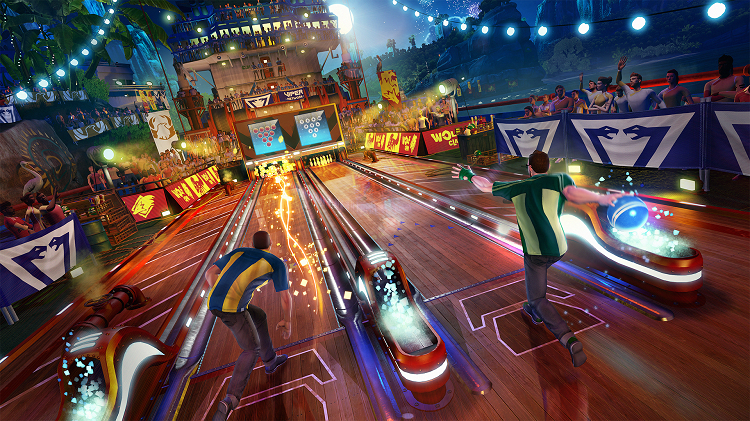 The sound effects for each event are pretty basic, with a few trademark dings and “reward sounds” when you do a good job. Other than that, they’re all pretty cookie cutter for their respective events. The dialogue and speech elements included in the game’s “storyline” are actually quite entertaining. A lot of simple jokes, interesting characters, and one hot-headed, stoic coach, makes for a much more personal playthrough.

Finally, a title that has the same entertaining motion-based control as the original Wii Sports. Kinect Sports Rivals manages to take the fun and simplistic mini-game factor that made Nintendo’s chart topper such a vast success and crank the knobs up to eleven. The Kinect experience is a much tighter, and more accurate affair. It mimics your motions in a smooth fashion and it manages to do so in a much smaller area than its tracking predecessors. 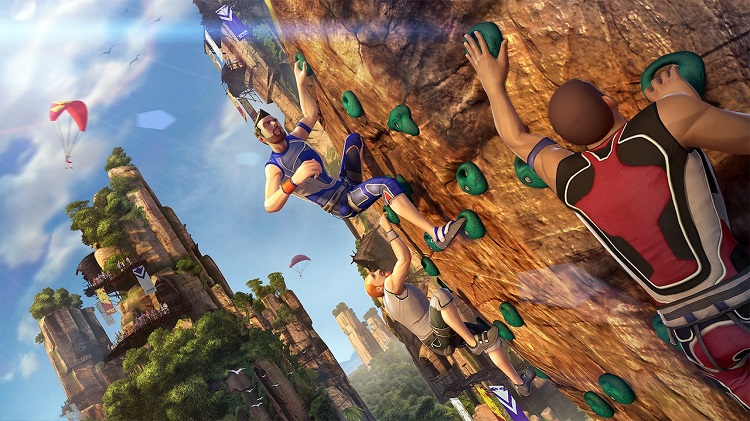 Six separate events take center stage for this release, including: Tennis, Bowling, Wave Racing, Rock Climbing, Soccer, and Target Shooting. Each event offers up incredibly simplistic controls that should appeal to anyone playing, regardless of their age or their familiarity with video games. Pair all of this simplicity with a leaderboard and you have a competitive playground where individuals from all over the world are capable of competing against one another on a level playing field. 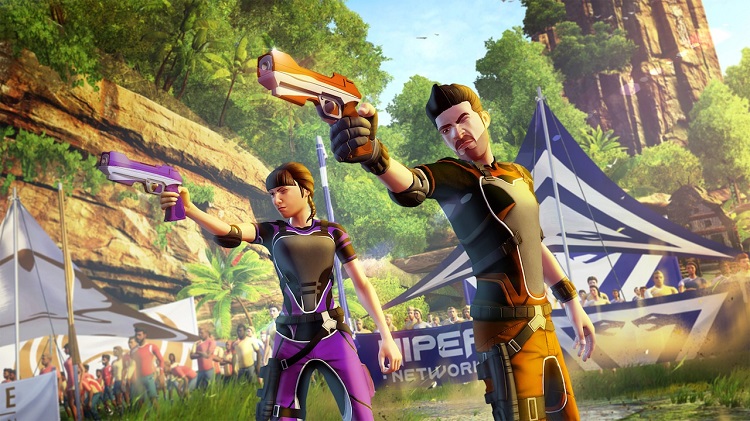 Perhaps the most unique aspect of this title is the character creation process. Back when Wii Sports first dropped, we were presented with a blank canvas in which we could create characters in our own likeness. Unfortunately, we were limited to basic shapes and forced to “Picasso” ourselves into the Wii-verse. Kinect Sports Rivals takes a much more technological approach to this customization process and actually takes the time to scan in both your body type, and your facial features in order to craft a character that is quite close to your actual likeness in most respects. It’s refreshing, entertaining, and offers a great layer of customization to such a “simple release.” For those of you who don’t wish to use your actual likeness, you can randomize a character, or simply create one from scratch.

Rare managed to piece together a great Kinect sports title, one that is a truly worthy, family friendly mini-game title with a party-like atmosphere. It will be very interesting to see what developers can come up with as far as DLC goes, and if they will be adding any new events or games in the near future. For now, you’ve got a world full of customization and a massive leaderboard just waiting to be conquered. This is definitely one of those titles you should have on your shelf, especially now as we wait for any kinect-based games to make their way out later this season. The price may seem a little steep, but if you’re the kind of person that enjoys a little physical activity and competition, it’s well worth the purchase.