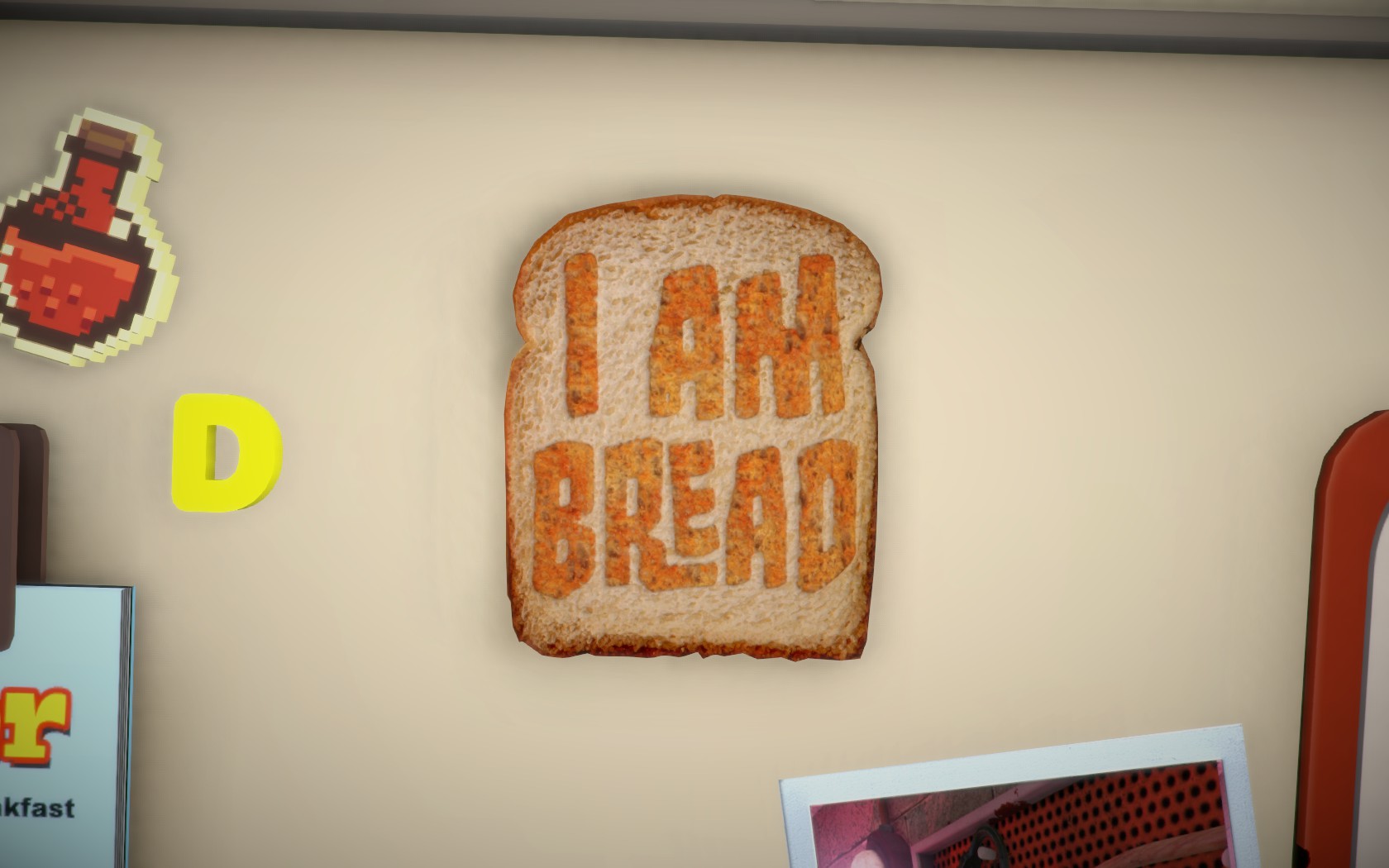 Spoiler: It lets you be bread.

Alright, so there’s more to I Am Bread than that, and while we may have seen our fair share in recent years of games with…curious concepts, playing as a sentient bakery item certainly tops my list of weird-as-Hell ideas. The best part, though? The whole damned thing.

I Am Bread hails to us from Bossa Studios UK — you might recognize them from their work on Surgeon Simulator or the less-recognized, but still relatively awesome Deep Dungeons of Doom. I Am Bread takes the Surgeon Simulator (or QWOP) mentality and runs with it: it’s a game that is intentionally difficult to control. 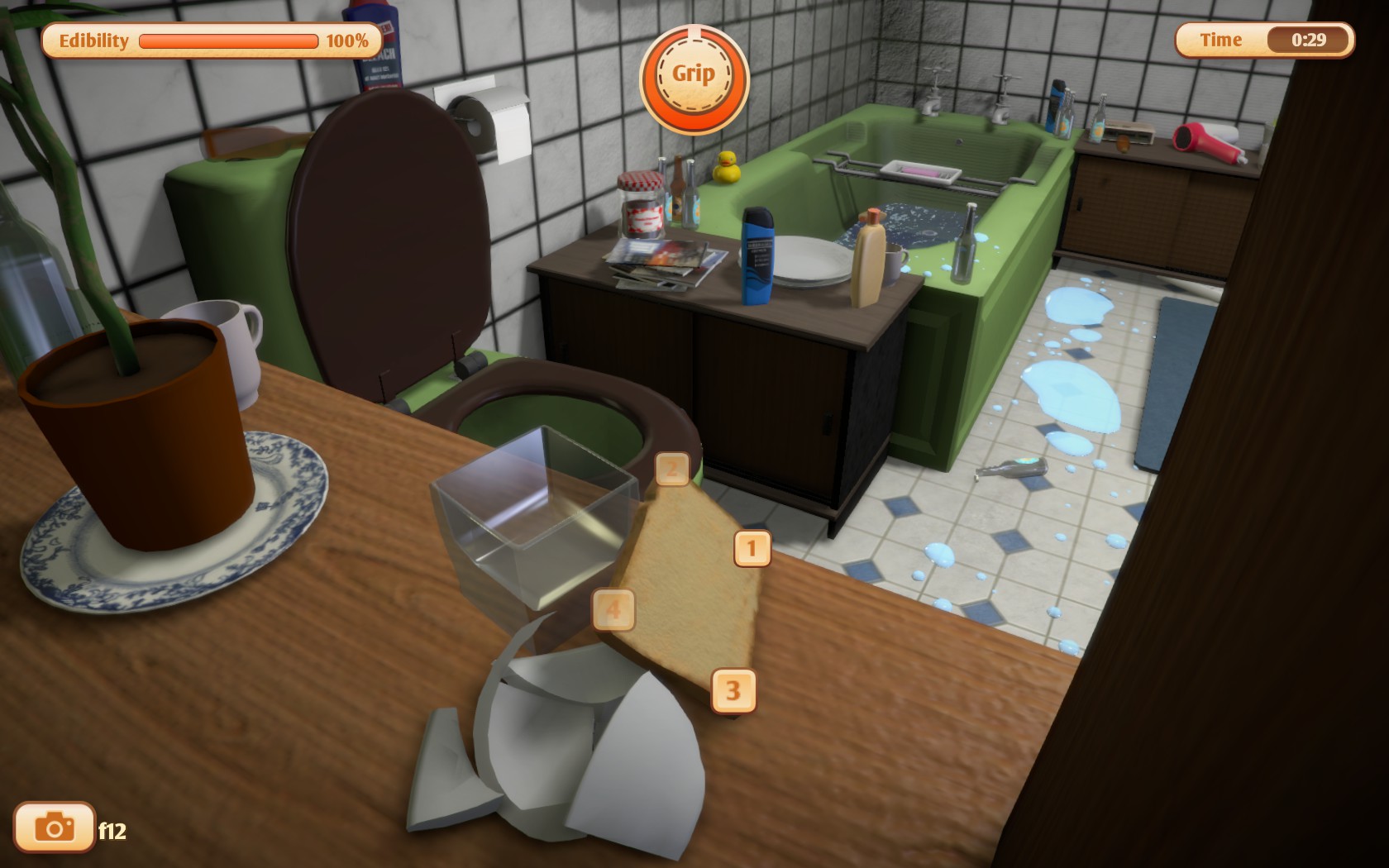 Let me rewind a bit. The concept is simple enough. You play, for the most part, as a slice of white bread. Each of your four corners is assigned to a number key, 1-4 (or the shoulder buttons of a gamepad). By pressing whichever of these buttons you like, you’ll grip whatever surface the corner is touching, and use the left mouse button or left stick to sort of propel your decidedly not gluten-free mass about. The end result is a slice of bread flopping across tables, smashing plates by mistake, climbing walls, and generally doing its best to do what all bread desires to do: become toast.

The game features a number of modes, but the core story consists of seven days of breadplay, the end goal of which is to locate a heat source with which to render each of your sides golden-brown and tasty. Upon reaching a toast value of 100% on each side, you’ll be ranked on your performance across a number of fields: time taken, edibleness, deliciousness, and toast quality. Your edibleness drops if you touch anything undesirable: a table might have ants on it to be avoided, the floor always counts as “bad,” as does any pool of water, or some moldy, forgotten walls. The game is oddly lenient in some strange cases (the tile in the kitchen? No dice. The top of a skateboard? That’s fine.), but does so out of necessity. With a few outlying offenders, you can readily identify a “bad” surface and work to avoid it, and some surfaces need to be allowed to allow for some of Bossa’s clever level layouts.

You’ll raise your deliciousness by locating condiments to apply to your fine, whole-grain self, which can also imbue you with special characteristics. Butter makes it easier to slide across surfaces, which can reduce your time in the end, while jam allows you to stick to various surfaces (useful for wall-crawling, saves precious grip), but will inevitably slow you down. Of course, any connoisseur of heat-blasted bread knows that proper toast should be of a particular blackness and consistency—making sure that you’ve toasted each side evenly and across the entire face of the bread is also crucial to your grade. It won’t be easy: I’ve thus far not achieved anything higher than a C. I’m working on that. 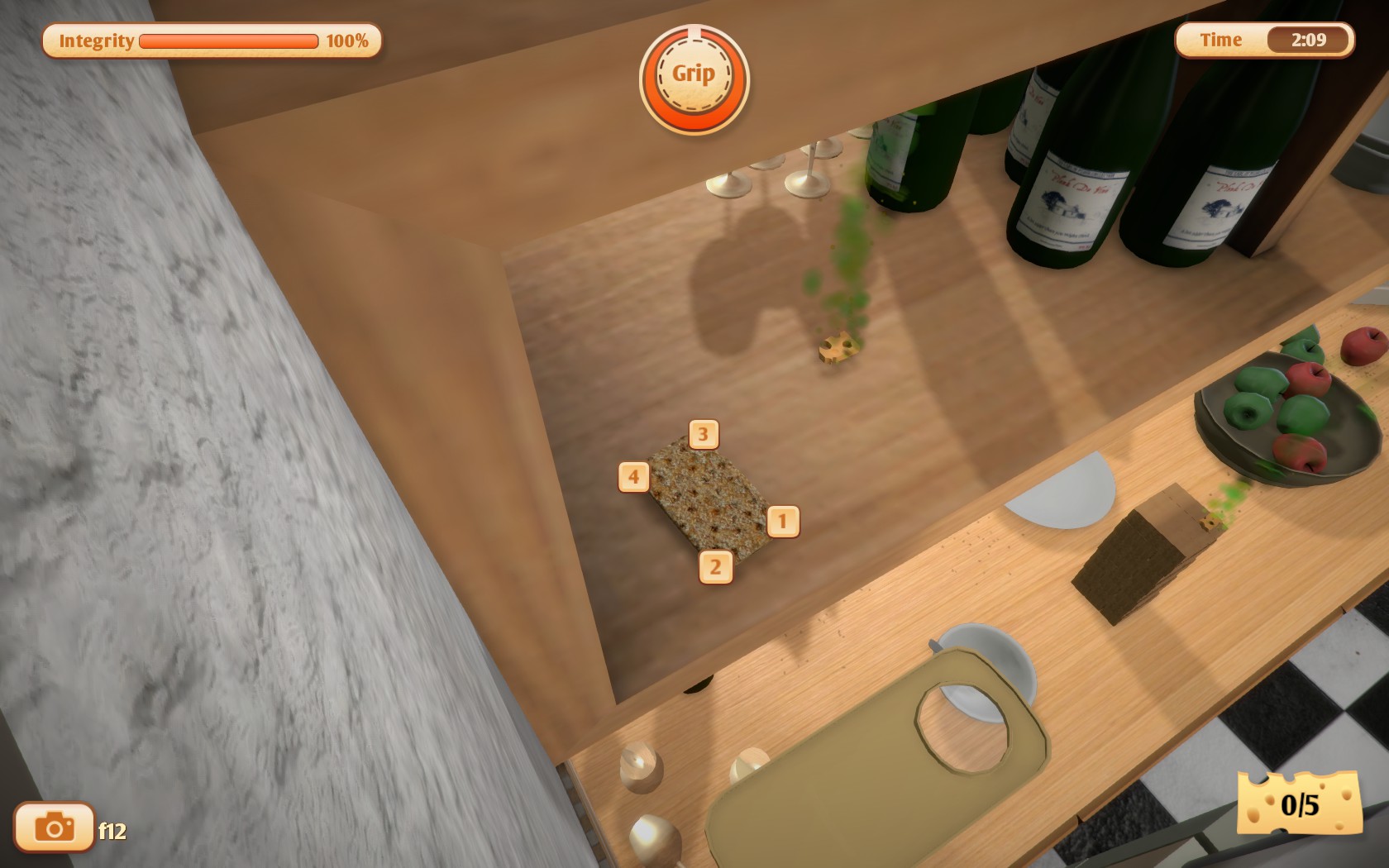 You’ll move through several rooms of a home, as well as some outdoor areas to accomplish your goals. The environment isn’t in and of itself particularly clever—the new home of a somewhat disorganized and possibly psychologically unstable man. Seemingly simple things become major challenges. Finding your way off of a table is your first major task—one that is at once simple (flop off the side) and unusually challenging (can I fling myself far enough to safely land on a box, rather than plummet to the floor in shame?). The environments themselves use a similar set of simple physics to Surgeon Simulator to evoke similar feelings of dread and laughter. More than once have I tried to cross a small gap, only to have my perch tip and cast me, butter side down, to my doom.