Sequels are a dangerous proposition—even more so when the game you’re following was a considered a success. Hotline Miami was special in many ways, boasting an ethereal narrative that never got in the way of gameplay, grisly violence that was at once senseless and possessed of great purpose, and one of the most realized atmospheres a game can have. After finding surprising success, the guys at Dennaton games have continued the story with new gameplay elements and a stronger narrative focus in Hotline Miami 2: Wrong Number, but the result just feels…lacking.

The original Hotline Miami held a simple premise: you play as an unnamed man (colloquially referred to as “Jacket”) who receives strange phone calls directing him to various addresses. Upon arrival, you don an animal mask that imparts some special abilities and proceed to viciously murder everyone in the area. Aside from a secret ending and some newspaper clippings that can be found in your apartment between missions, there’s virtually no story to speak of to impede the gameplay, which resulted in a sort of compulsion in many players to piece together the underlying story like pieces of a shredded document. You sort of knew what was happening, but the payoff was real when you really saw the big picture. 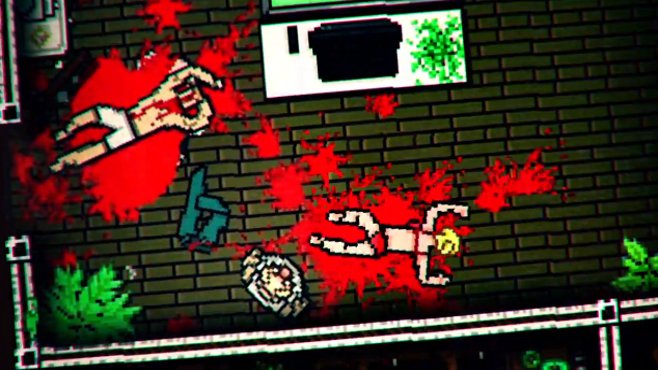 Hotline Miami 2 sought to feature a larger plot to drive players to the game’s conclusion, but in doing so brought attention to a pillar of the game that was better left in background to be considered in passing, but not directly addressed. Where the first game featured two protagonists (and one temporal rewind), Hotline Miami 2 instead has you playing as thirteen different protagonists (never really a good idea, if you ask me) all of whom relate to the original game in some way.

This is the first of a series of poor decisions on the part of the devs. The sort of unintentionally obscured narrative of the first game resulted in attempts to make a complex story in the second, the result of which is a convoluted story filled with too many jumps to different time periods, not enough focus on any given character, and—most importantly—too much reliance on prior knowledge of the first game. Truly, the game shouldn’t be played in isolation. Even if you have played the first game, I encourage you to play it again before spending time in the second, and to pay particular attention to all the small details.

The problem is that many of the connections to the first game, while clever, are too easy to miss. One of the protagonists was a key character in the first game, and I never realized until I did further research upon finishing the game. This relegated most of the main characters into unlikable driftwood, but some are more easily forgiven for their contribution to the gameplay. 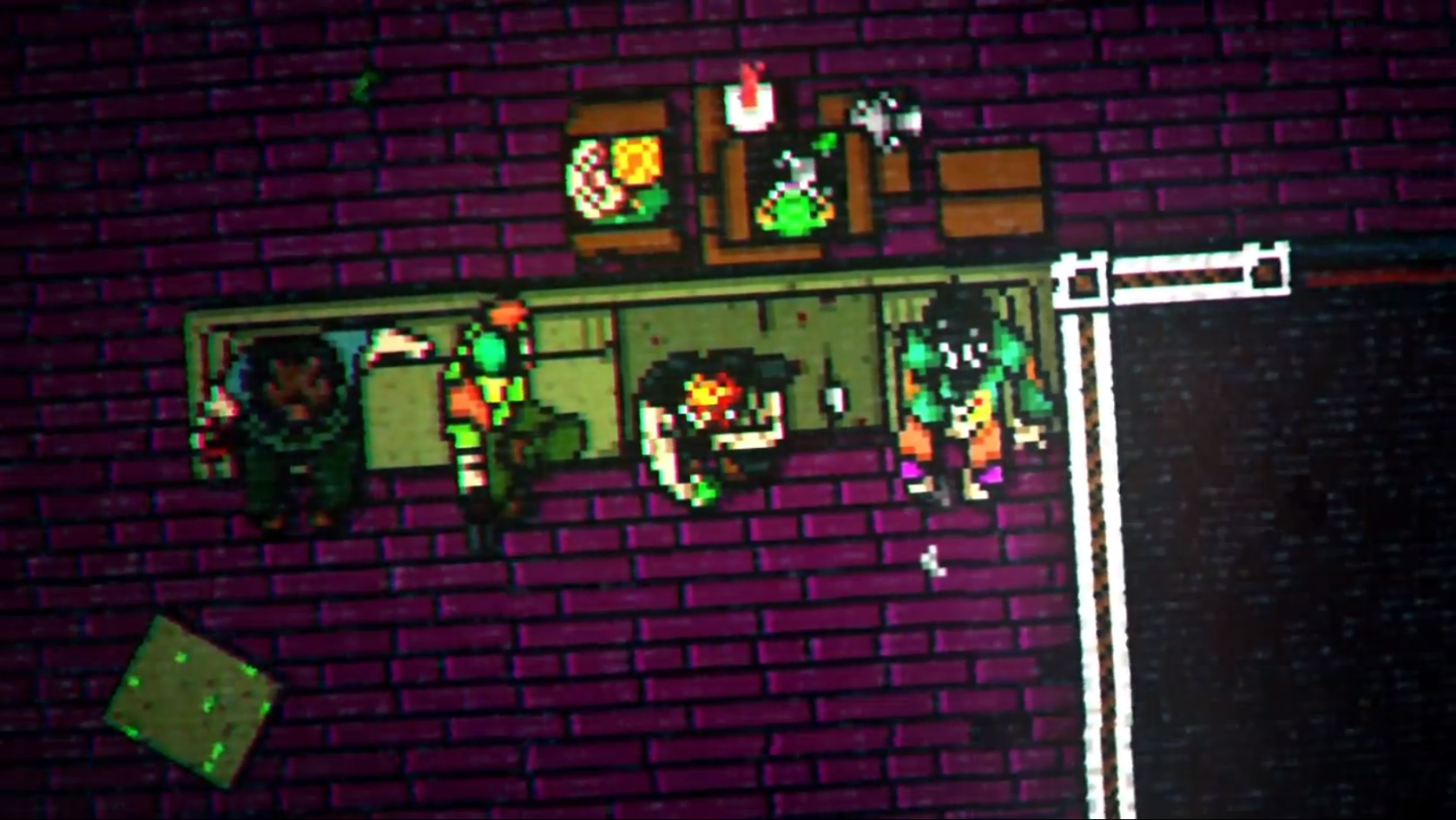 Each character brings a different gameplay element into the fray, some more drastic than others. A few seem like wasted opportunities: Manny, SPOILER Richter END SPOILER, The Pig Butcher, and The Henchman are functionally the same, unfortunately. But Jake, like Jacket, can don several different snake masks that impart different abilities. Evan the Writer tries to be nonviolent, which limits your weapon choices and makes finishing enemies difficult. Pushing him past his limits, however, can cause him to enter a blind rage. The characters that function as the Soldier are granted special guns that can’t be obtained anywhere else and can switch between the gun and a knife, but can’t acquire new weapons mid mission. The Son uses a style system that can tweak his play like masks two. The most standout of the bunch are the Fans. A group of five friends that idolize Jacket and emulate his behavior. Each has a different theme—the best being Alex and Ash, a pair where your main character wields a chainsaw while a second follows using a gun, allowing for some impressive multitasking. This added variety is a powerful extension of the masks from the first game, which offered only minor tweaks to gameplay.

Unfortunately, that variety is wasted on uncharacteristically poor level design. In what I can only imagine was a misguided attempt to expand the levels into wider fields of play, the game devolved into a really bloody game of hide and peek, luring enemies through doorways and beating them over the head with pipes. Movement through a stage used to be a heart-pounding dash at a fast pace, an adrenaline-fueled murder-fest. In the second game, you’ll plod along, abusing the key to shift your view ahead to avoid being shot by off-screen enemies and dodging past one of a bajillion windows through which you’ll be swiftly assassinated.

Deaths in the original Hotline Miami rarely felt cheap, but rather were the fault of the player (in a very Dark Souls way) and lent themselves more to bold, risky play as opposed to Hotline Miami 2‘s rote memorization and cheap tactics. It’s a real shame because the pacing of the first game made it easy to lose yourself in—of itself an intriguingly symbolic action given the game’s themes—but the second game starts to plod at moments when it should really drive forward. 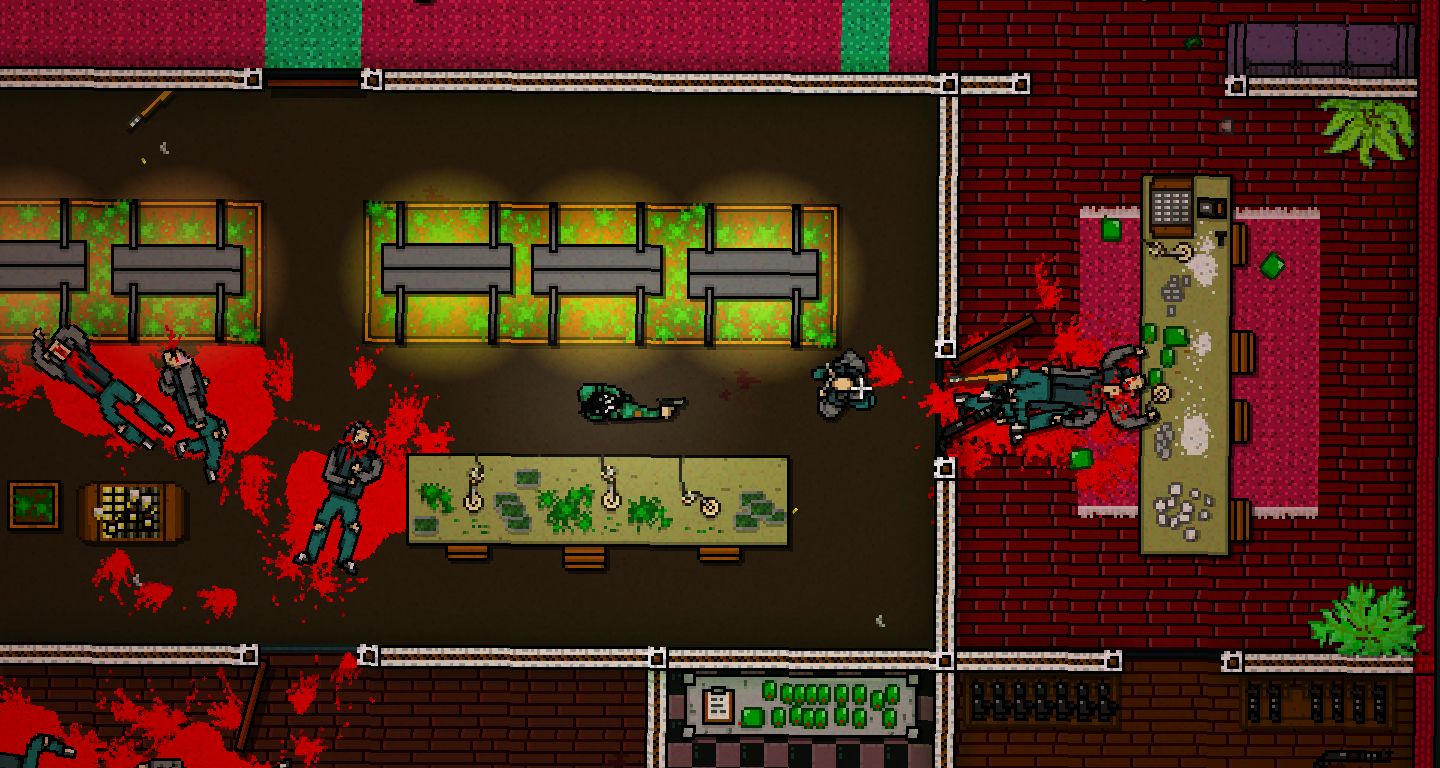 The game also suffers from some unusual technical issues, simple bugs that range from small annoyances like thugs getting stuck on doors and becoming whirling dervishes of death that can’t be killed, to major detriments to gameplay such as Ash’s apparent inability to properly follow Alex through anything more than the most simple terrain (see: wide open space). These are issues that don’t kill the game completely, but add another nail to an unfortunate grave that Hotline Miami 2 seems to be digging for itself.

Even the presentation suffers in some ways. The graphic style of the game along with the general theme of gameplay doesn’t lend itself to particularly diverse environments without a lot of set decoration. This isn’t a glaring issue in most cases—you’re just running through buildings executing thugs without remorse. Several stages, however, already marred by the pinpoint accuracy and long range with which your enemies can dispatch you, feature objects that you can’t readily identify as objects that can be walked over or shot over, which can lead to some frustrating deaths when you find yourself stuck on a random object that enemies can just fire over.

Despite this, though, the visuals are still right where they need to be: colorful rooms are quickly coated with buckets of blood in a macabre ballet of death. Some of the stages feature more moving elements in the background that are at once disorienting and compelling—mirroring the mindset of the characters with aplomb. 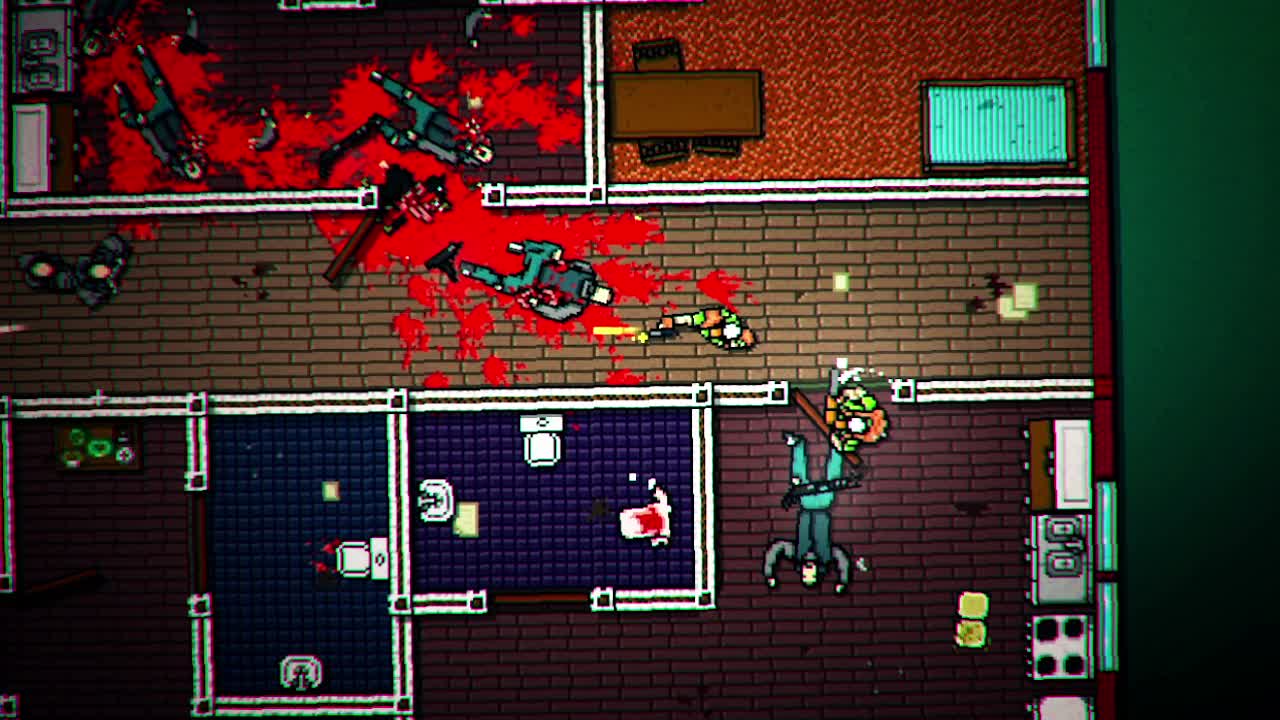 The star of the show, as it was in the first game, is the soundtrack. If Dennaton got anything right it’s not only picking tracks that suit the game, but knowing which tracks to use and when. On more than one occasion my heart rate increased as a direct result of some bass dropping at just the right moment. The stage that plays Carpenter Brut’s Roller Mobster was a particular high point for me in many ways.

There is still plenty to find in the game. There’s at least a few achievements that I’ve seen that, by their description, would indicate that I’m not seeing everything the game has to offer. And on that front I am excited to continue. That being said, there are just enough grievances that it might be too much of a chore for what might be a dismal payoff. Still, I prefer to be optimistic.

And if you’re a big Payday 2 fan like I am, purchasing the Hotline Miami 2 deluxe edition will net you the ability to play as Jacket while you’re heisting and some extra weapons to boot—you could definitely do worse. 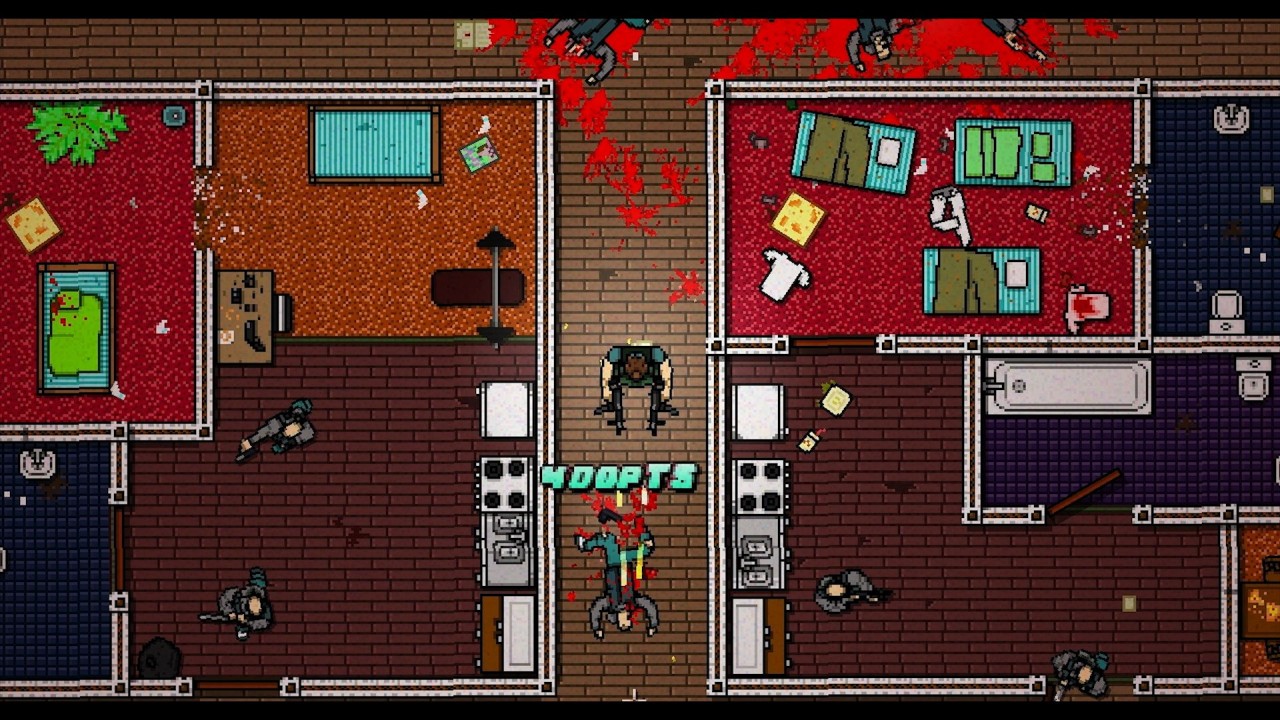 The first Hotline Miami was a veritable ballet of violence and destruction, and the second game not only continues the trend, but introduces larger diversity in gameplay and a strong continuation of an already dark and compelling story. Also, listen to the soundtrack, if you’ve half a chance, it is one of the best in modern gaming.

So, key points: make sure you’ve played Hotline Miami before you move on to Hotline Miami 2: Wrong Number. Consider keeping a log of what time certain events happen, because the in-game presentation of this is immensely clunky. I have to give it to Dennaton in at least one way: they really took risks in trying to make this game a sequel that wasn’t just a carbon copy of the first game. The unfortunate result is that this game’s relationship is the opposite of Batman Arkham Asylum to Arkham City, a game that grew a bit too much for its own good.

If you liked the first game, you’ll probably like the second well enough, just be prepared for some disappointment. The game is better in some ways, worse it others, and the end result of all of this is a game that is as solid as the first, if somehow less magical than the first did. You can snag it on Steam, PS4, or PS Vita for $14.99.