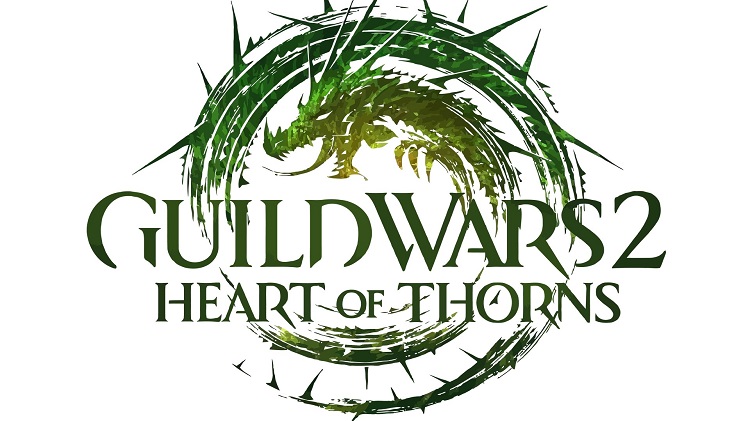 I’ve been following and actively playing Guild Wars 2 for roughly three years now. I was there from launch day, and made my way through countless Living Story missions, eagerly following the title’s entertaining and evolving storyline. I’ll be the first to say that I love the Guild Wars 2 universe, and that I thoroughly enjoy almost all aspects of the game. But after three years of seemingly endless exploring, I felt like I had done everything there was to do in the world of Tyria. My recent Guild Wars 2 campaign has consisted mainly of log in sessions where I harvest valuables or run a dungeon here or there for a chance at some good loot. Because of this, you can imagine my excitement when developers announced the first Guild Wars 2 expansion, Heart of Thorns.

Just like launch day, I’ve been eagerly trouncing through every bit of Heart of Thorns content I could get my hands on. I ran through the story, enjoyed each zone, and found myself sifting through tons of online banter just to find out how to acquire all of the new weapon and armor skins. I remember how nice it was to finally feel the same exhilaration I did when I first booted up Guild Wars 2, and although Heart of Thorns should be treated like any other expansion, it has managed to bring some things to the Guild Wars 2 universe that are truly revitalizing the title. This isn’t just one massive content push. It isn’t just about adding new weapon skins and character classes, it’s about continuing a storyline that is easily one of the most entertaining withing the MMO genre. 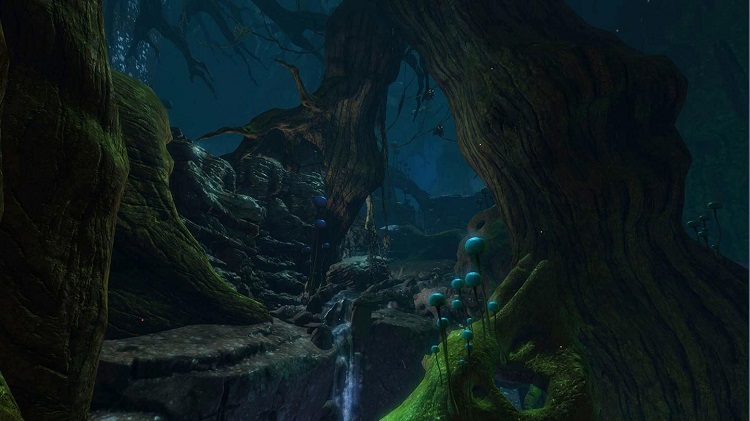 Those of you who followed the Living Story closely will recall the series of events that lead up to the current expansion. Heart of Thorns’ story takes place immediately after, thrusting you and your friends deep into the heart of the mighty Maguuma jungle. The new story arc will take you across four separate zones, as you thrash your way through painfully powerful Mordrem enemies. Unfortunately, the story missions aren’t exactly long. This perhaps the most glaring issue to me when it comes to Heart of Thorns. I understand that expansions usually come loaded with a “decent” amount of content, although I can’t help but feel spoiled after experiencing the massive expansions for the original Guild Wars.

If you’re really into it, the storyline for Heart of Thorns can be completed relatively quickly. In order to create a sense of “time” between each mission, developers added mastery requirements. Masteries are new skill sets and perks that can be unlocked by training and gaining enough experience. Some of these masteries are integral to story completion and they tie in nicely by serving a purpose in each mission. It may be annoying to some, but it actually aids in lengthening the story experience. Still, from a personal standpoint I felt rather let down from how short the story really was, and how anti-climactic the conclusion seems. My guess is that Guild Wars 2 developers plan on releasing more Living Story content in the near future, which would be a very welcome addition.

For those of you that are interested mostly in the visuals and unlockable skins for Heart of Thorns should find yourself surrounded by a sizable chunk of new content. From the rather huge zones to the new and interesting creatures, the Maguuma jungle offers a lot of new additions to the Guild Wars 2 universe and its lore. Each zone even has its own particular trade system and event chain, making it seem as if the areas are each foreign lands all their own. Verdant Brink sees the devastation of the Pact and focuses on Airship parts. You’ll find yourself assisting the Exalted with a nasty Mordrem vine problem in the colorful Auric Basin. You even discover a long forgotten city and protect it against angry insects in the Tangled Depths. There is plenty to do in each zone, and each area has its own Meta-event and goods to collect. This includes necessary parts for weapons, armors, and guild items. Completion of these maps is also necessary for unlocking required components to craft one of three new legendary weapons that are making their way into the game. A lot of time can be spent deep within Maguuma, but there have been other changes to the Guild Wars 2 universe that happen right in the heart of Tyria. 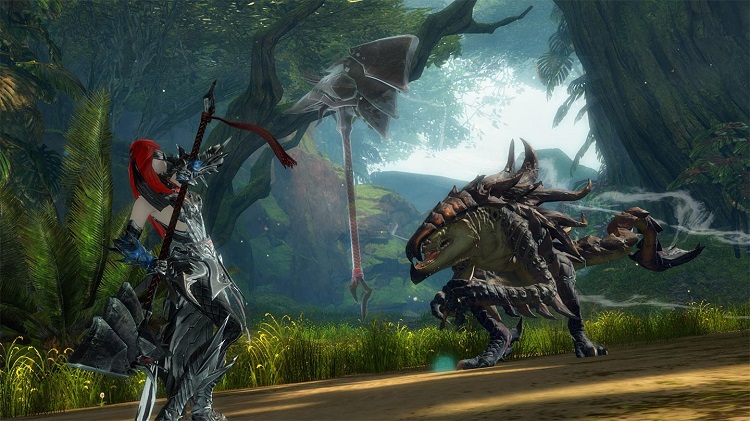 Central Tyria masteries have also been added, including a set that will allow you to craft an entire legendary weapon from the ground up. Prior to Heart of Thorns, precursor weapons could only be found or purchased from other players. Now, with the addition of masteries and collections, you’re free to take the necessary steps to craft any precursor weapon you’ll need. The path is long and arduous, but it gives players who haven’t had the luck in finding their own precursor the ability to craft a legendary.

In addition, developers have added legendary backpiece items, which can be obtained through Fractal dungeons, and there are already many rumors spreading about the impending release of legendary armors. It is important to note that the legendary items in Guild Wars 2 are incredibly challenging to obtain. Players who wish to walk the path will have to prove themselves in all facets of the game, including felling massive world bosses, competing in large scale World-Versus-World (WvW) matches, and getting their hands dirty in Player-Versus-Player (PvP) content. To own a legendary, you must truly accomplish a legendary set of feats in Guild Wars 2, and honestly it’s a very refreshing thing to see. Only those who are truly dedicated to the path will be rewarded, and it really helps to give you something to strive for in the end-game.

Any of you seeking WvW and PvP content will also be rewarded in Heart of Thorns. There are a lot of interesting additions to the game, including some specialized rewards and legendary items that can only be obtained through these game modes. We’ve also seen the addition of a new PvP type, dubbed Stronghold, which acts much like a scaled down version of WvW, with a limited number of players competing. Developers have also added new titles and rankings that will show the entire Guild Wars 2 community just how good you are at a given PvP game type.

Guilds have also seen some major improvements. Instead of the plodding task of unlocking and researching missions and bounties for your guild, you’ll now have a set series of events that your guild can compete in each week. This allows smaller guilds to be on a semi-level playing field with larger outfits. By competing in enough guild-based content you’ll eventually be able to unlock a Guild Hall, which acts as a large customizable home base for you and your guild-mates. Decorations and helpful unlocks can be acquired from many different aspects of the game, to truly set your guild hall apart from the rest. 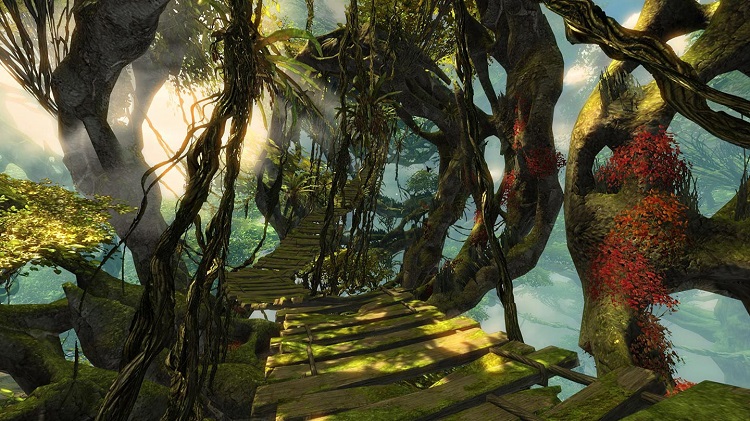 Combat remains fairly unchanged, but new classes and abilities have been introduced. Each pre-existing class has been giving a new specialization which will give you access to new slot skills, a new weapon type, new elite skill, and heal skill. This has managed to introduce a lot of depth into the title and has broken up a lot of the monotony that we experience from playing one character class for too long. The Revenant has also made its way on scene, giving us an entirely new class (with its own specialization) to play around with. The specializations all feel unique and developers did a great job integrating them into the expansion.

Guild Wars 2: Heart of Thorns is a well constructed expansion that was direly needed for a great MMO that was suffering from monotony. I really applaud the developers for all of the new additions they managed to cram into this release, and I’m rather excited about the path that Guild Wars 2 is headed down. I wish there could have been more to do in terms of story, and maybe one other class, especially when you look at the $49.99 price tag. But all in all, I feel that Arena Net took a huge step in the right direction to increase the longevity of their well crafted MMO. If you are interested in getting more information regarding Heart of Thorns or want to get in on the action yourself, be sure to check out the dedicated website here.