We all have weaknesses- mine are hidden-object puzzles, indie games, adorably morbid illustrations, and food featuring either melted cheese or avocados. Luckily, Gomo, the point-and-click game from Daedalic Entertainment and Fishcow Studios meets three out of four of those with truly charming results. It’s definitely a quesadilla and a side of guac short of the full package, but no game is perfect.

In it you play as titular character Gomo out to rescue his dog, Dingo, from nefarious extraterrestrial forces. You must make your way through a inordinately puzzle-heavy subterranean mine in order to retrieve a red crystal to ransom Dingo from the aliens. While there isn’t much that sets Gomo apart from similar puzzle adventures, the animation is certainly what drew this gamer in. Gomo plays out like an animated Edward Gorey-esque confection with a certain degree of deadpan to really endear itself to players. Gomo shuffles, sighs, flops and at times even falls on his face. It plays like a whimsical 2D dream- if that dream were animated by Jhonen Vasquez. 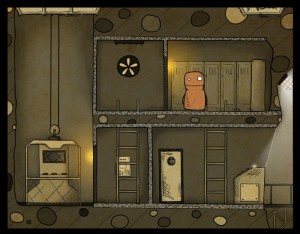 It should be noted that, unlike other games of the same genre, this one does not feature the frustrating and ever-present “spoiler glow” that is often a dead giveaway in similar games. Because of this, the puzzles are very much trial-and-error, though that in no way detracts from the game. For better or worse, players must fend for themselves while an impatient Gomo humorously expresses his disapproval. Aside from that the gameplay is hardly revolutionary but that doesn’t make it any less enjoyable. Be warned: Very little of Gomo makes sense. Hints are hidden in strange corners, puzzles have very little to do with the main objective of the game and logic absolutely cannot and should not be applied to your gameplay.

The game itself clocks in a little under two hours, not counting the optional side quest to unlock three mini-games. With a few exceptions, every level follows the same format of finding a missing item and using it to complete the puzzle to make it to the next stage. One level is especially reminiscent of the vending machine hacks of Bioshock fame- suspiciously so, one could say. It can’t be said that the draw of this game lies in its originality.

Gomo is not, by any measure, a game changer or likely to become a top-seller for Steam but it’s certainly an enjoyable way to pass two hours. With its simple interface, challenging-but-not-impossible levels and little to no dialogue to speak of, the game is definitely kid-friendly for the budding gamers in our midst. 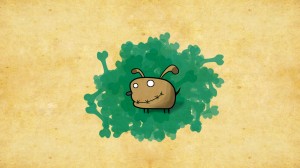 Released late last year, Gomo is available Steam store for $7.99 and is playable on Macs, PCs and STEAMPLAY. He and Dingo are waiting very patiently in the indie section along with quite a few other games that certainly deserve the same love reserved for the glossy big-budget new releases.