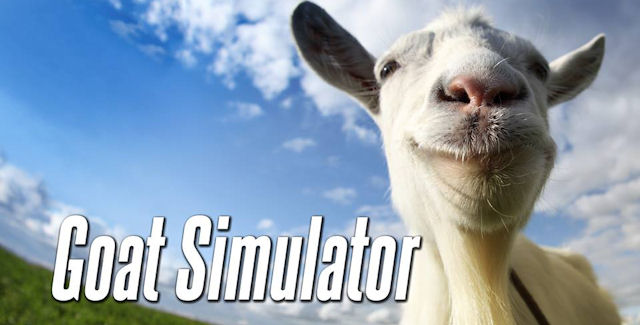 We live in a truly exciting age.

Recent discoveries have rocked the foundations of our understanding of the universe. Artificial muscles are being developed that can heal inside the body. Tests are beginning into what scientists only hesitate to call suspended animation. And you can play as an invulnerable virtual goat, wreaking havoc in a small town. With a jetpack. 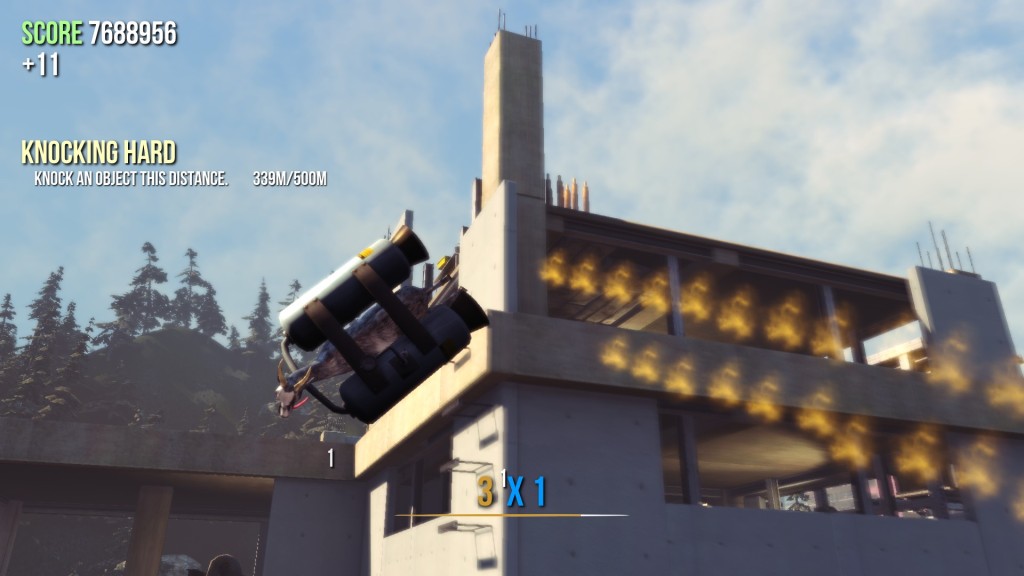 Enter Goat Simulator, the name of which is the perfect combination of acuity and brevity in its description of the game. Coffee Stain Studios, most known for their work on the Sanctum series, held a game jam after finishing their work on Sanctum 2. As a bit of a joke, they put out a trailer for a game where you play as a goat, charging around a town and generally wrecking things. The internet did its magical thing, and—with a surging chant of “This must be a thing”—Goat Simulator was born.

There is really not much to say about the game, in the most technical sense. The story is simple: you’re a goat. Go be a goat. Being a goat involves things like, running, jumping over things, ramming things, licking things, and bleating.

The game plays as a sort of Tony Hawk’s Pro Skater on drugs, assigning most of your actions a point value which you can string together into combos. The game assigns a small set of assorted goals to accomplish, so there’s at least some form of challenge and something to aspire to. There are plenty of hidden little trinkets and funny things to interact with. Fireworks, a hillbilly racetrack, launcher fans, a jetpack, trampolines, all kinds of things. 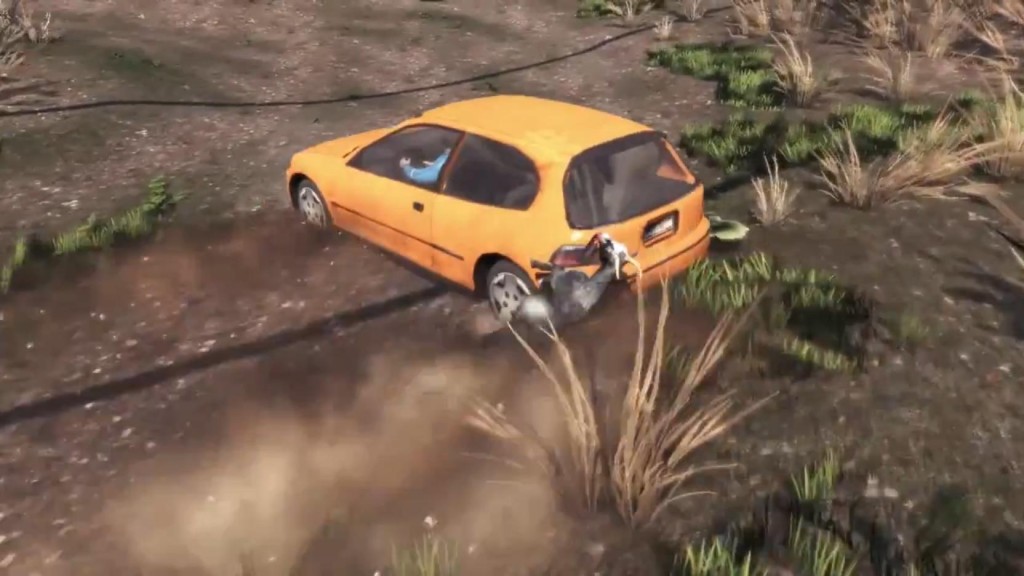 The  map is small, but fairly dense, in terms of things to do. The game wasn’t built to rival GTA’s cityscape—you can run from one end of the map to the other in a minute or less. You’ll run into more than enough fences, cars, and people along the way to distract you, though. 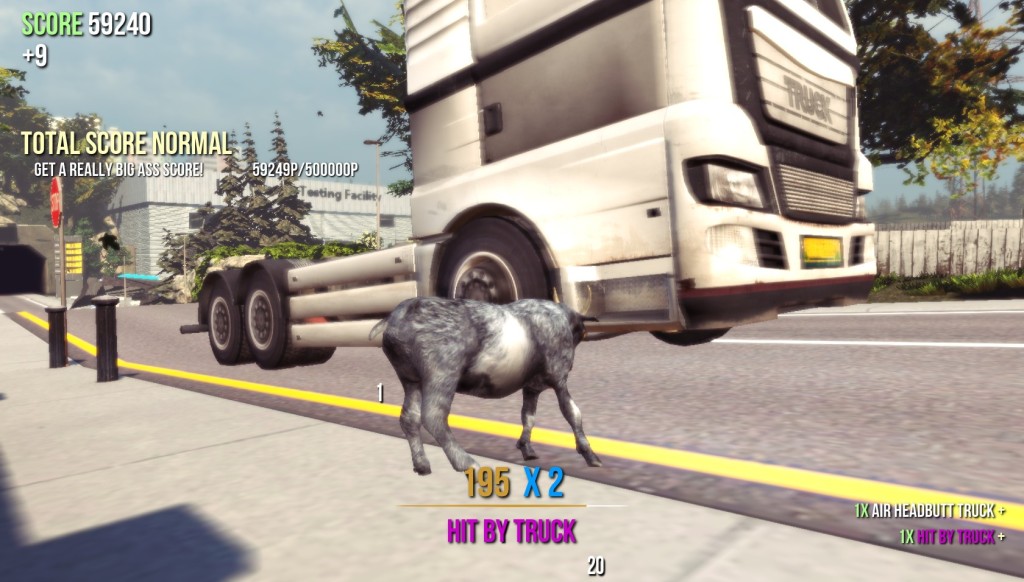 Visually, the game is nothing to write home about. Everything about the game is indicative of its humble not-actually-meant-to-be-made origins, flat textures, silly models, and wonky physics.  There is some hilariously bad voice acting, though the goat sounds are pretty much entirely accurate, and completely hilarious. The full OST for the game runs about eleven minutes, but is almost hypnotic in its strange and off-kilter melodies.

All this adds up to a game that resides in what I feel is a precarious position. It’s the product of a finicky internet audience. A joke manifest into a full-blown product. Were I to levy a general judgment, Goat Simulator falls into a territory where  I would call it a success, but not something that lives up to all the hype it generated by its unusual concept.

That’s not to say that the concept isn’t working for the game. The dev had the right mindset all along, I think. The steam description of the game is utterly comical, and displays the games most prominent features: being a goat, bugs, and being a goat. By stripping away any fluff or distractions (see: story, characters, meaningless sidequests, etc.) they’ve created a far more sensory experience than what recent gaming has tried to accomplish. Goat Simulator is more than the sum of its parts, it’s a perfect microcosm of indie gaming today.

It started out as a simple exposition. It gained traction quickly. Off-hand it became a game. It was embraced as it was, flaws and all, made only to be stable enough to avoid crashes. Every flaw was viewed instead as a character trait. Every broken moment is a testament to the game’s pseudo-originality. The game, after all, isn’t an original concept, gameplay-wise. It won’t win any beauty contests. It will, however, defy your original expectations—but not in ways you might expect it would. 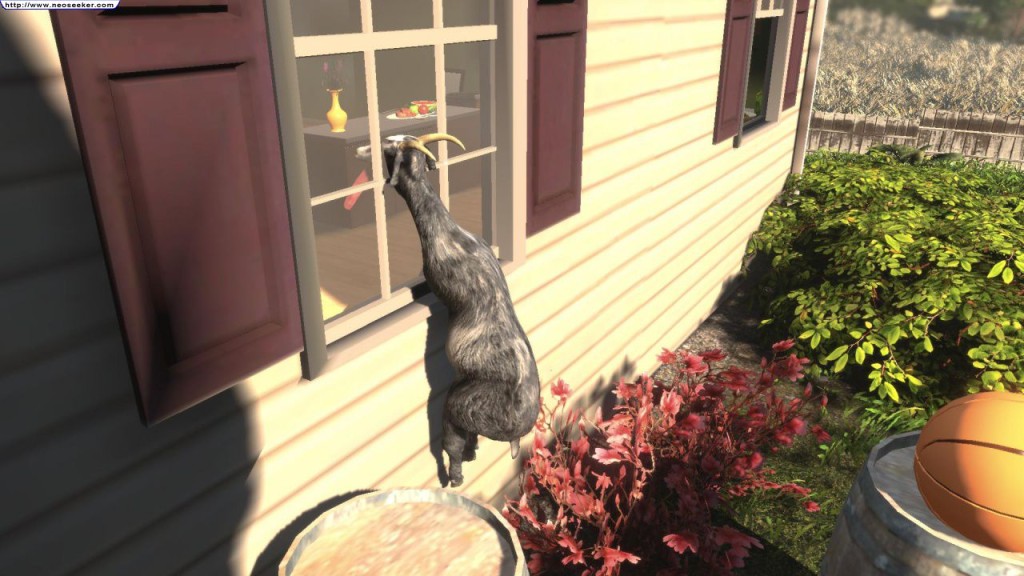 This comes at one great cost. The stripped-down mechanics and small-area, as well as the lack of general direction brings the time during which you can really enjoy the game as a game to a very low number. There’s no real motivation for achieving a large score. The layouts aren’t different every time you spawn. The limited area means that finding all the secrets aren’t particularly difficult to find. There are some custom game modifiers that you can turn on and off, but not enough (yet) to really inject any longevity into the whole thing.

Thankfully, Coffee Stain has committed to at least some upkeep, having announced that another map and split-screen co-op will be introduced in an upcoming update. Similarly, the game is fairly mod-friendly, even including a workshop mode for allowing players to create their own content. It remains to be seen if the community will really take up the fight in establishing a stronger content base for the game.

It’s hard to truly recommend Goat Simulator in a lot of ways. I feel like it’s something that everyone should experience, firsthand. Videos and let’s plays simply cannot convey the odd giddiness that wells up as you headbutt your first gas pump, or break up a barbecue, dragging the smoking husk of a car wreck behind you. At the same time, once you’ve done that, you’ve done that. And there really isn’t more to it, unless you’re dedicated to making it more on your own. It really does remain to be seem if the game will go out with a bang…or a bleat.

Pick up Goat Simulator on Steam for $9.99, if you intend to see for yourself. I don’t think you’ll be disappointed, as long as you know what you’re getting into.