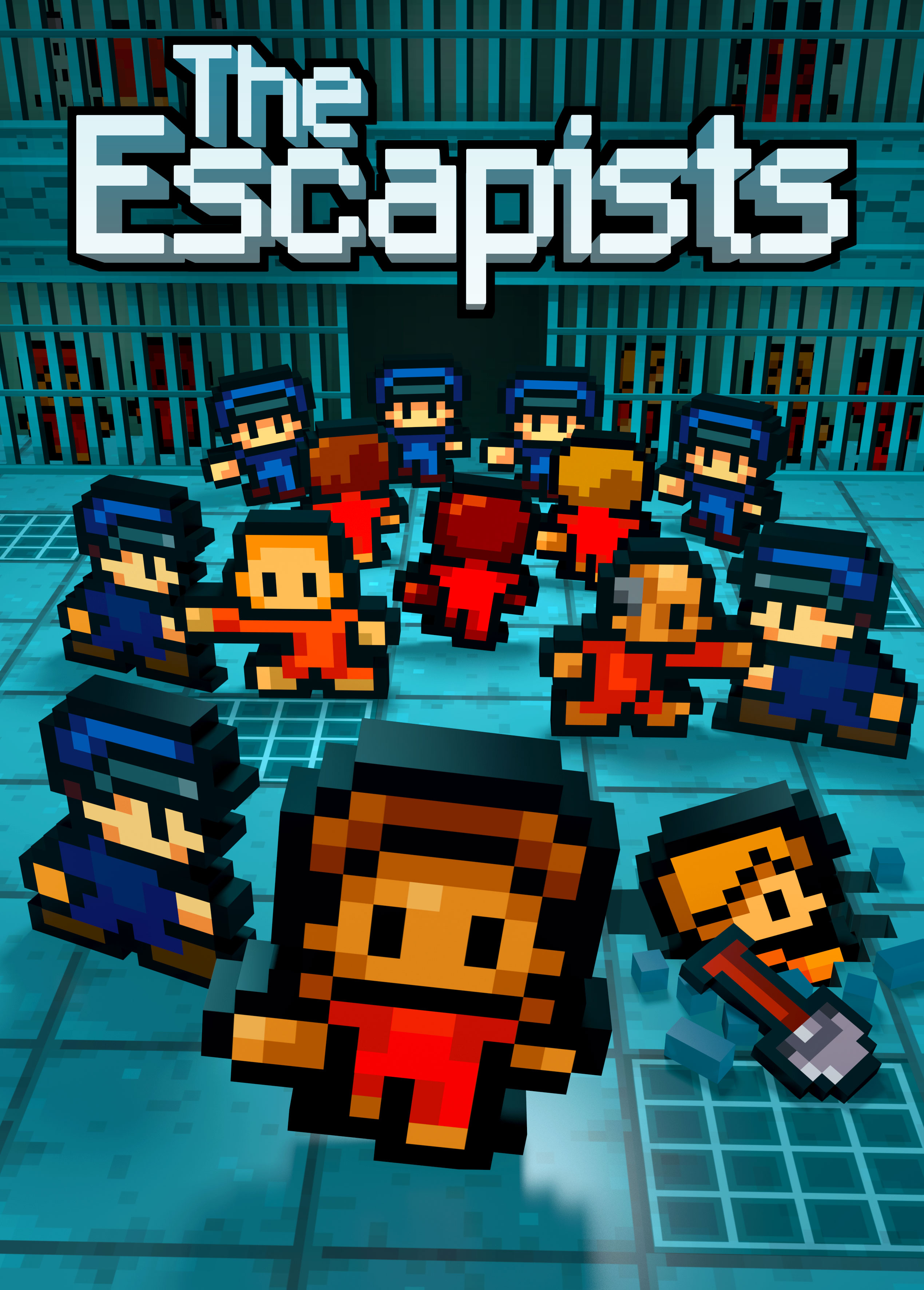 Get A Taste Of Prison Life In ‘The Escapists’

Prison life is all about routine. Or so I’m told.

Rollcall. Breakfast. A couple of hours of free time. Lunch. Work. Exercise. Shower. Dinner. Rollcall. Lights out. Day in, day out. We’re not here to be upstanding inmates, however. We yearn for freedom. To get loose however we can. 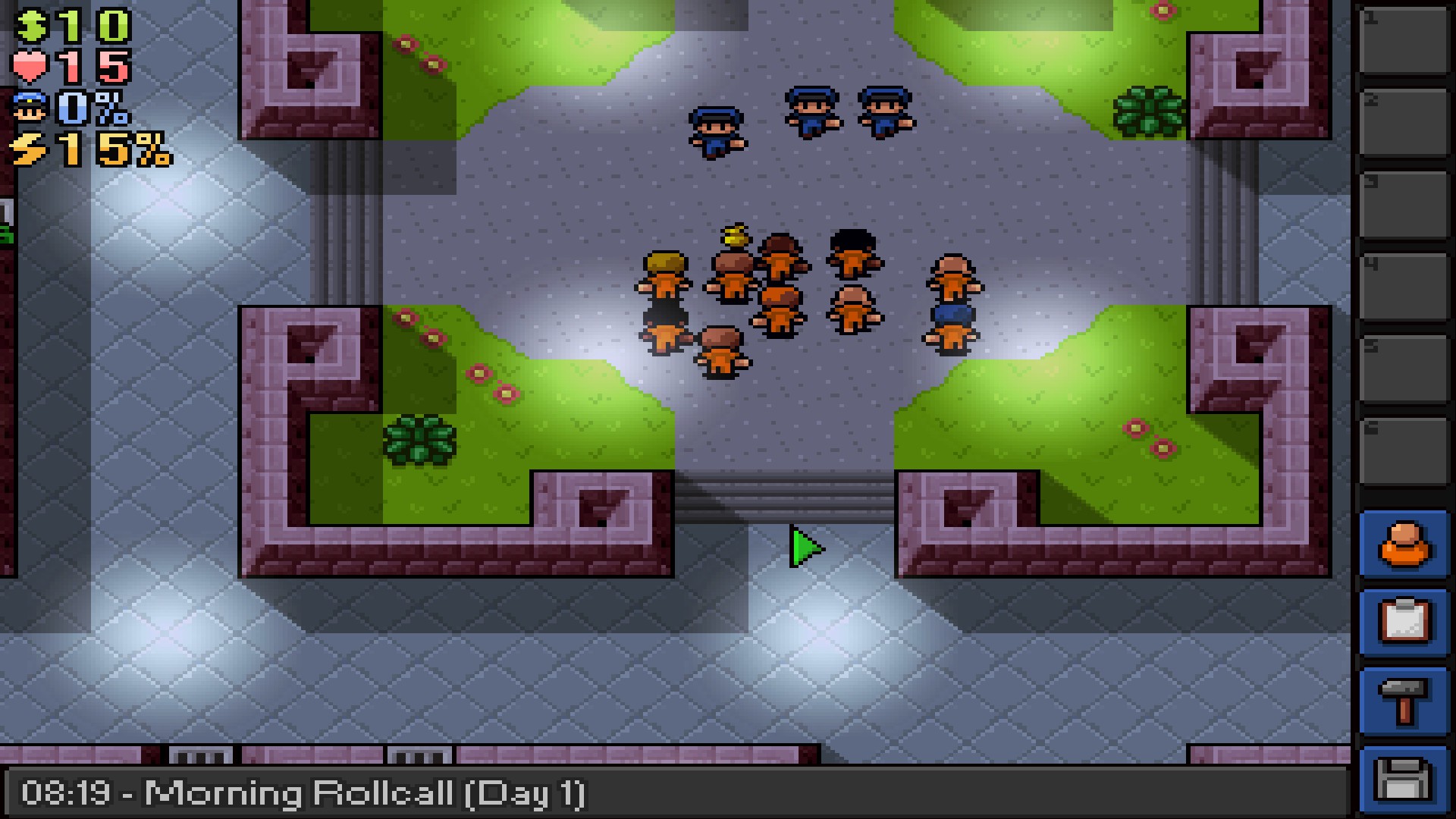 And that becomes your sole focus in The Escapists, a clever title developed by Mouldy Toof and published by Team 17 (of Worms fame). Find out how to get out of your prison sentence while avoiding unwanted attention.

It’s tough to define a genre for The Escapists. It’s kind of like a puzzle game. It has some dungeon crawler/roguelike elements. More than anything, though, I’d call this a strategy game, though it’s one quite unlike what you’d traditionally see. Each of the six available prisons has its own schedule, layout, and mechanics that will force you to consider all your surroundings and plan appropriately for your escape. If you’re looking for a game where you make your way to the gates in a firestorm of bullets, you’ll need to look elsewhere. It’s the patient and the careful that are rewarded here.

And “rewarding” is probably one of the best adjectives I can assign to The Escapists. The game has a brief tutorial, but it only covers a few of the actions available to you, essentially teaching you how to stick to your schedule, undo vent covers, and maybe snatch a guard uniform. Other than that, it’s up to you to find out the utility in all the items available to you and the ways to maximize your time while keeping yourself under the guards’ radar and in the good graces of your fellow inmates. 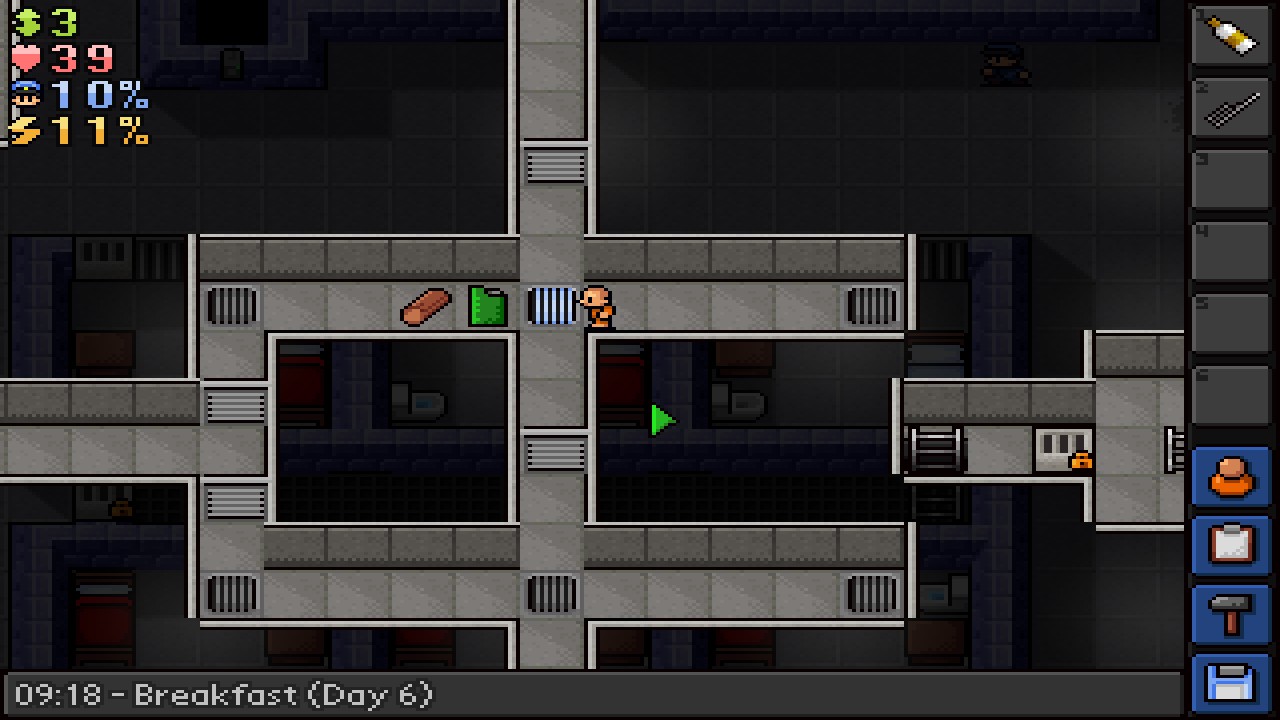 The victory conditions are simple: reach the edge of any given map. That’s not particularly tough. It’s getting to the other sides of those fences that really challenges your thought processes. You’ll have to bypass doors, avoid tower guards with rifles, avoid getting snitched on, dodging cameras, avoiding cell shakedowns, and altogether minding all your P’s and Q’s as your master plan approaches fruition.

Obviously, there are some givens in gameplay. You’ll spend the majority of your time working and doing favors for other inmates to accumulate money so you can gather the objects you need to put your plan into motion. Some items are safe to keep with you or stash in your desk (a tube of toothpaste, a bar of soap, or a sock), while others are marked as contraband and will be taken from you if you’re rendered unconscious or your cell is checked—which will also result in your spending a few days in solitary (comb shivs, duct tape, timber, or that same sock with that bar of soap inside for a handy weapon). 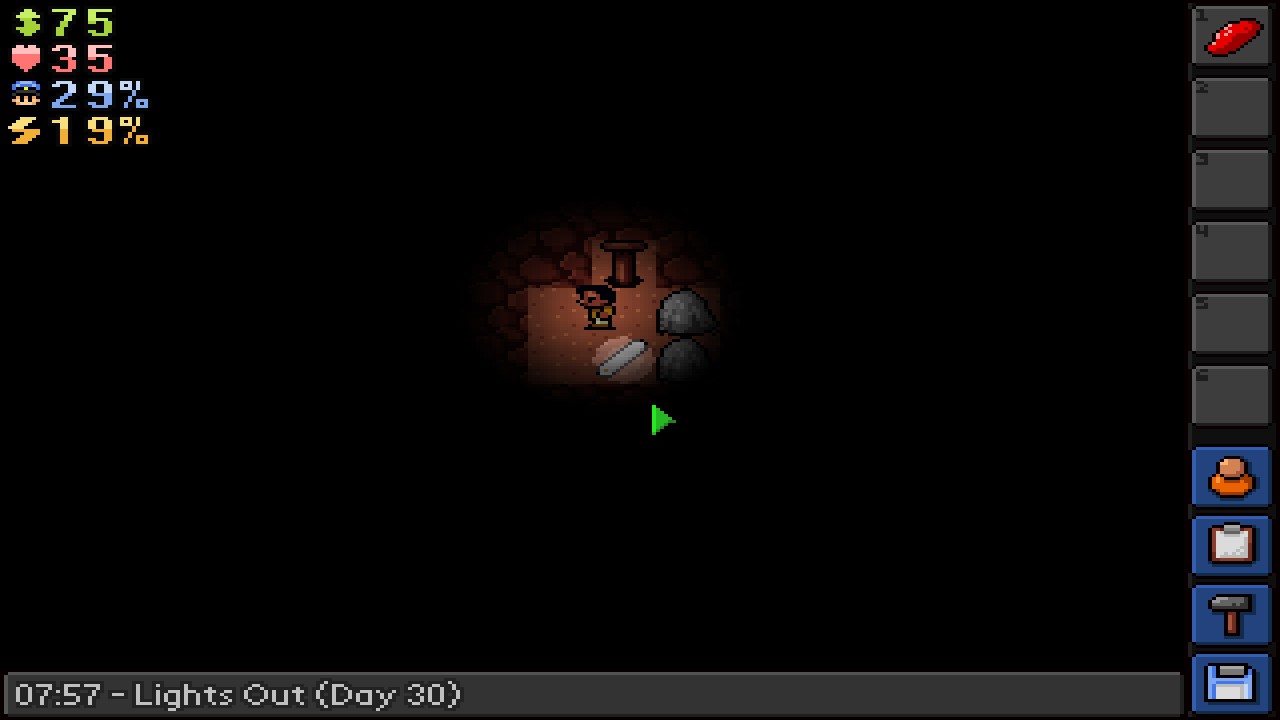 The game features a simple crafting system so you can start to use the mundane items around the prison for more nefarious purposes, and some items have novel features that you wouldn’t expect out the gate. A tube of toothpaste is unassuming, but can be combined with talcum powder to make a wad of putty that can summarily be used to make a mold of one of the keys the guards carry (I learned the hard way that if you just take the key, they’ll report it stolen and track you down), granting access to areas you otherwise couldn’t reach. That same tube of toothpaste can also render a camera unable to detect you for a brief period of time, in case you need to do some dirty work in an otherwise “secure” area.

Most of the time, you’ll be conducting your business away from prying eyes. You might toss some rolled up sheets and a couple of pillows onto your bed to ensure wandering guards don’t poke their heads in. You’ll have to have made sure you’re in your cell mate’s good graces while you flit about, lest he run and snitch on you to the guards. If you unscrew any vent covers, you need to be sure to replace them, or the guards will find you in the vents and toss you in solitary. cover holes in the walls with posters or false bricks. Cover pits beneath your desk. Flush contraband if guards are coming to shake you down and you don’t have enough space in your pockets (but hope you have a plunger handy if the toilet backs up). You’ll conduct a lot of antics at night, while the tower guards aren’t around to shoot you as soon as you start clipping fences or digging holes courtyards. 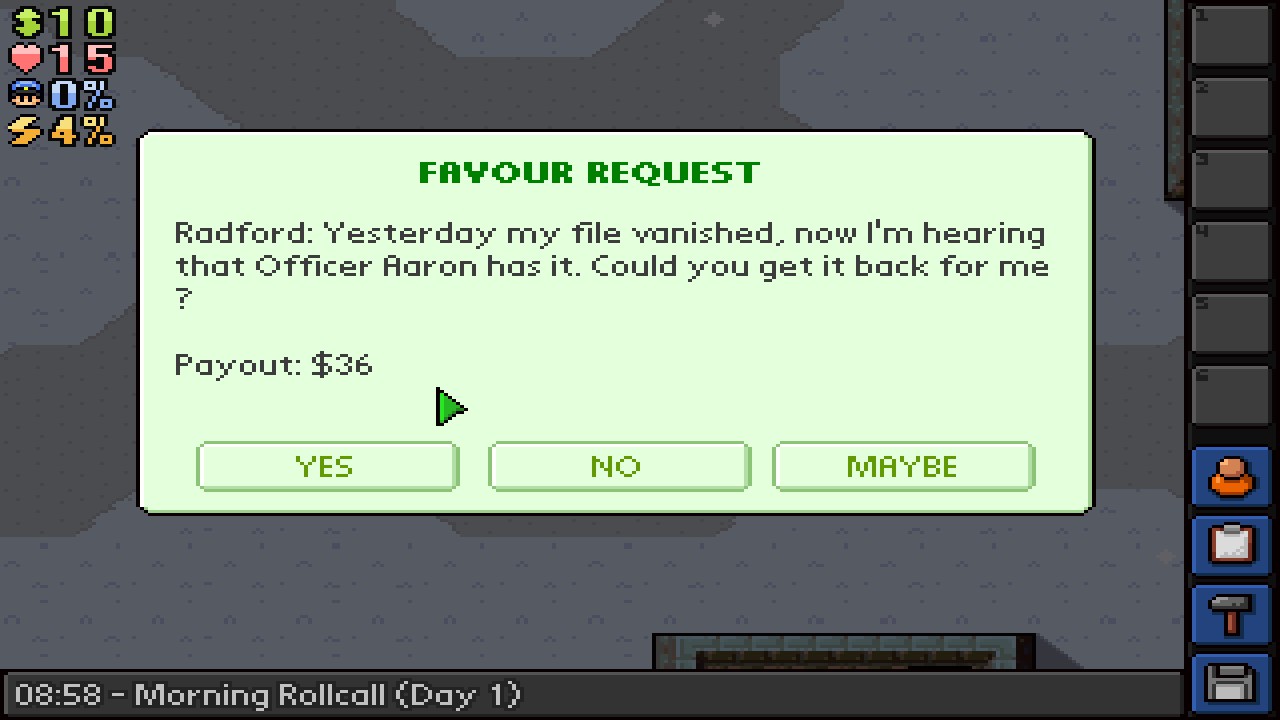 Hell, if you’re feeling bold and generous, you can even recruit other inmates (by doing them favors and giving them items) to fight the guards with you. If you can beat up and bind all the guards on site, and take a hostage, the outside doors will unlock, allowing you to walk right out the front. But it takes work to make sure everyone in the prison likes you well enough. You also have to stash your hostages somewhere where they won’t be discovered. You’ll need more than a few lengths of rope or rolls of duct tape, both of which are contraband items.

It’s a delightful medley of different genre elements that come together to create a very enjoyable experience that satisfies many of our gaming cravings: a little violence, rewarding efficient execution, dungeon crawling elements, side quests (in the form of favors), and a very tactile sense of figuring out how to approach your environment. Mouldy Toof knows when not to sweat the small stuff (it can be silly how easily one can distract guards and just round a corner only to have your aggressors give up the chase) and when to punish you for neglecting finer details (better make sure you empty your pockets of contraband before passing through certain special detectors around the prison). It’s a wonderful marriage of stat building (lift weights to do more damage, jog to increase speed, read to get smarter and be able to craft more items) and heisting, only instead of trying to get in, you’re trying to get out.

Don’t let the game’s 8-bit cartoony look fool you. The game is as punishing as those old NES games used to be. It took me more than a few hours to complete even the simplest level. The colorful palette ensures that most objects are clear and obvious, even in the dark nights. The sound design is less harmonious, you’ll want to play the game on half volume, lest your stereocilia be flattened every time the bell rings to signal the next schedule block. 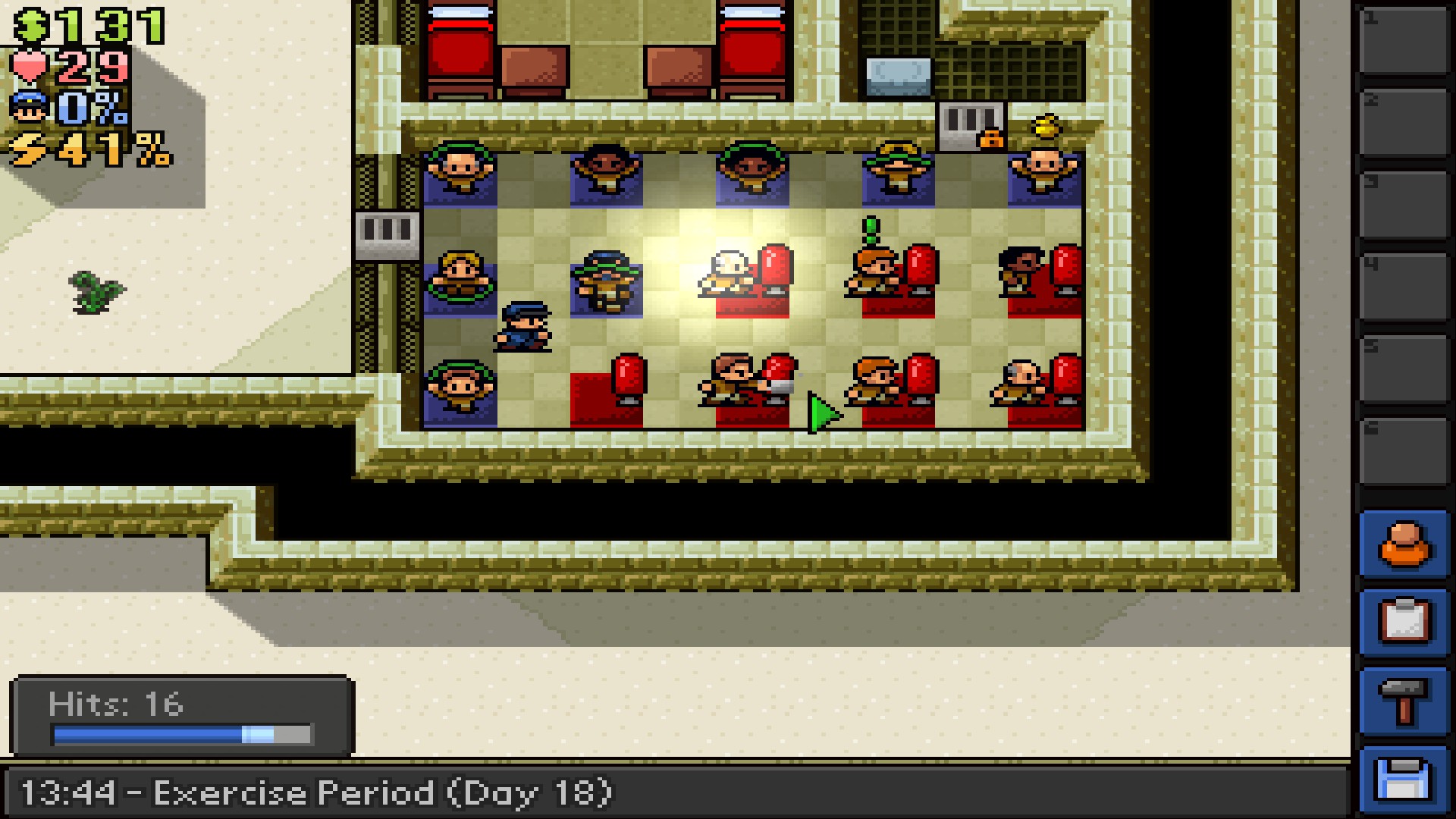 The Escapists is a great example of an idea that was refined through the Early Access process and came through instead of petering out. Outside of some weird grammatical issues here and there, the game has very little unnecessary fluff to it. The tutorial is quick and explain the basics well, but doesn’t ruin the minutiae of the rest of the game. You’re free to explore and formulate your own plan of action as you move. There is no abstract morality system, there’s no unnecessary story, and the game isn’t intentionally flashy to cover its flaws. It’s an honest game. That also happens to include the ability to beat other people with socks filled with batteries.