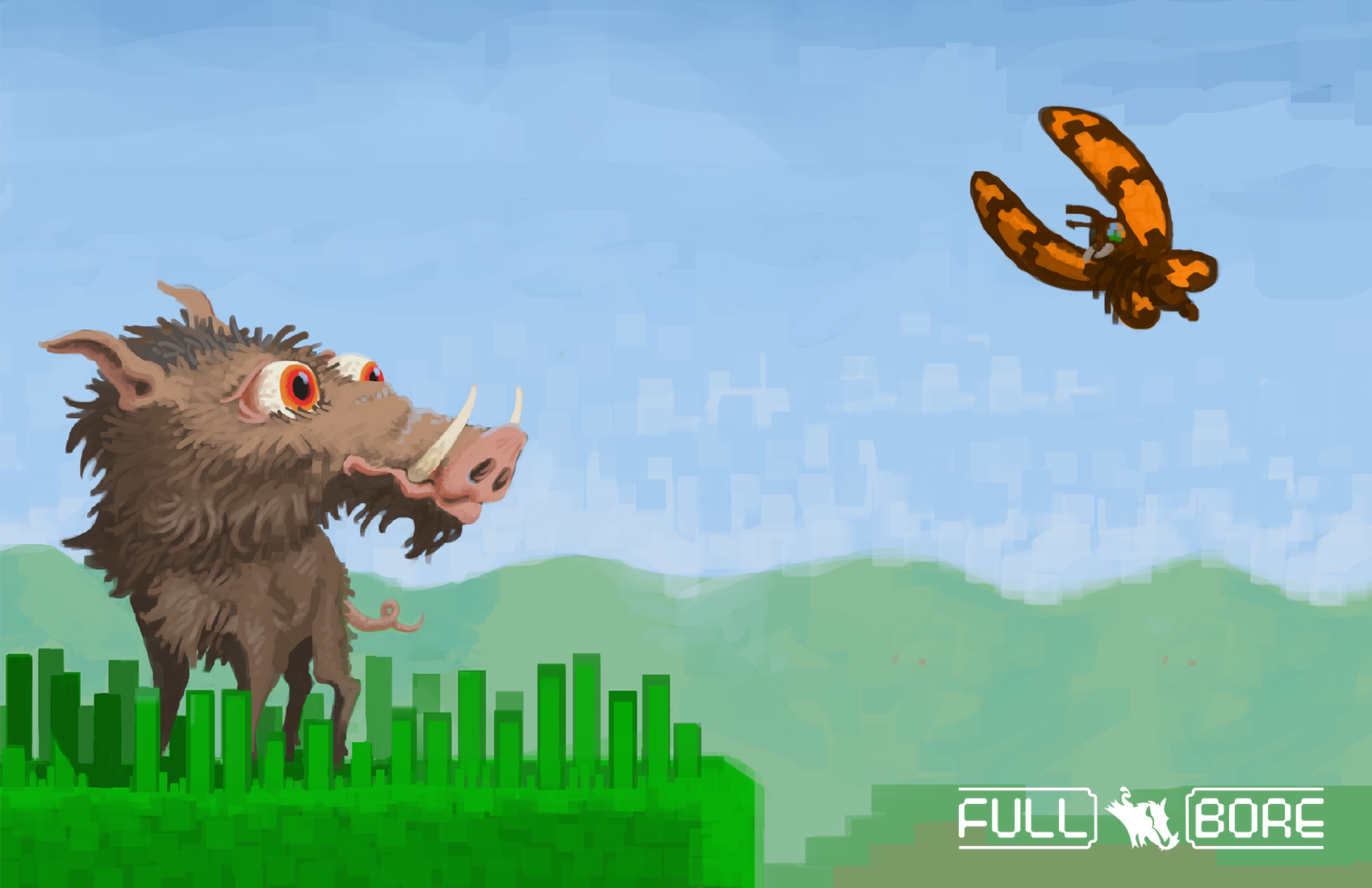 Full Bore Review: You’ll Be The Smartest Pig In The Room

The screenshots of Full Bore don’t really do the game any sort of justice.

I caught wind of a strange little puzzle game where you play as digging pigs, and was completely prepared to brush it off as any other generic puzzler. I quickly realized my folly—there is no way for me to say that a game such as this is no good if I don’t give it the chance to prove to me that it’s not. So I loaded it up, and clearly had no idea what I was actually in for. 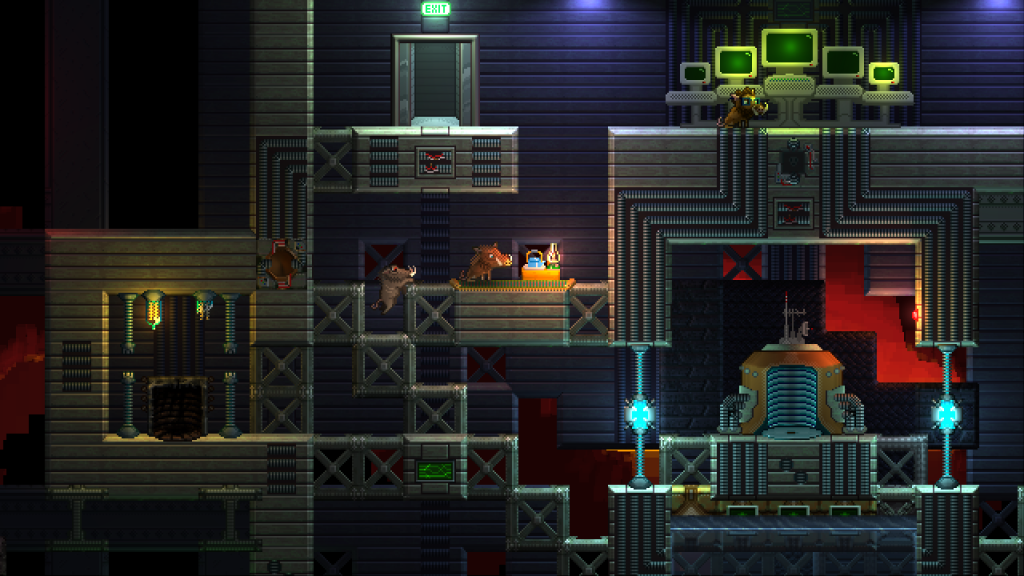 It’s difficult to know where to start with Full Bore. At it’s core, the moniker of “indie puzzler” suits the game perfectly, built by a small team over at Whole Hog Games and requiring an almost ridiculous amount of digging through varying forms of earth and pushing blocks around.  This is where some of the more compelling aspects of Full Bore start to make themselves evident. You can count the number of abilities that your anthropomorphic boar possesses on one hand: run, climb a single block height, fall, push stuff, and stomp (with your face). That’s it. Given this, though, the environment demands that you consider how you use these actions, and finds a curious sense of variety in such a small moveset.

The game gives off a strong scent of Metroidvania—the environment is wide and varied, and involves a lot of traversing back and forth throughout these environments. The key difference is that a Metroidvania will dangle tantalizing goodies in front of you, presenting impassible barriers with the promise of being able to pass through at a later time, when a new power or ability has been uncovered. Full Bore scoffs at the very idea: all the abilities you’ll learn in the game are immediately available. Or, to be better phrased, there are hundreds of abilities at your disposal. Though they’re all able to be executed from the very start of the game, these abilities aren’t strictly laid out for the player. They exist in your head. And it’s up to you to discover how to properly utilize these methods to navigate the world and eventually sort out the strange mythos. 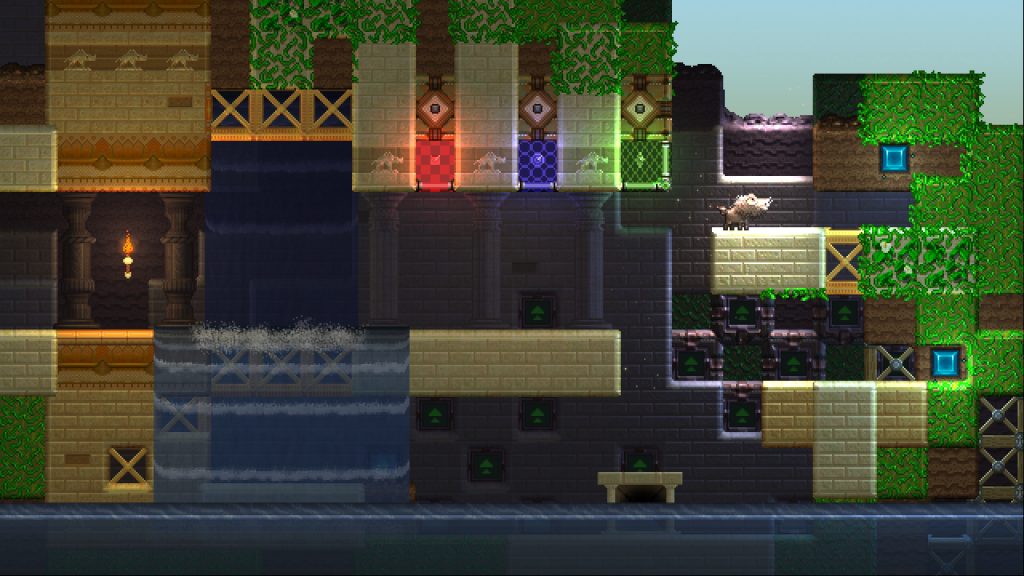 This is Full Bore‘s strongest element, hands down: the level design is awe-inspiring. Insane amounts of time and care must have gone in to the construction of these puzzles. Early areas sufficiently ease you into shifting blocks around, and how to dig through varying kinds of dirt, ash, and stone to reach your various objectives. The most you’ll receive in the way of tutorials is something along the lines of “Press Space to stomp”, and maybe they’ve placed a small assortment of block types nearby to show how your stomp affects things. This is a game that doesn’t hold your hand, interrupting the action every few minutes to make sure you remember how to move that block.

As you dig deeper and deeper, the puzzles become more and more complicated, requiring considerably more care to be exercised as you move through these caverns and tunnels. Some kinds of stone are affected by gravity, and will fall when the blocks beneath are removed. Ash and loose sand is unable to support the weight of anything—yourself included—, demanding caution in its presence. Some blocks grasp walls on either side, shoot lasers when powered, explode if handled too violently, the list goes on. However, the devs were clearly confident: you were given all the tools, and it’s up to you to use them properly. They struck a careful balance, and nailed it—never did I feel like the game was talking down to me. Far from it, it felt like the game was always encouraging me to find the solutions, but refusing to give me the answers; it hinted at them, sure, but was careful never to give away too much. 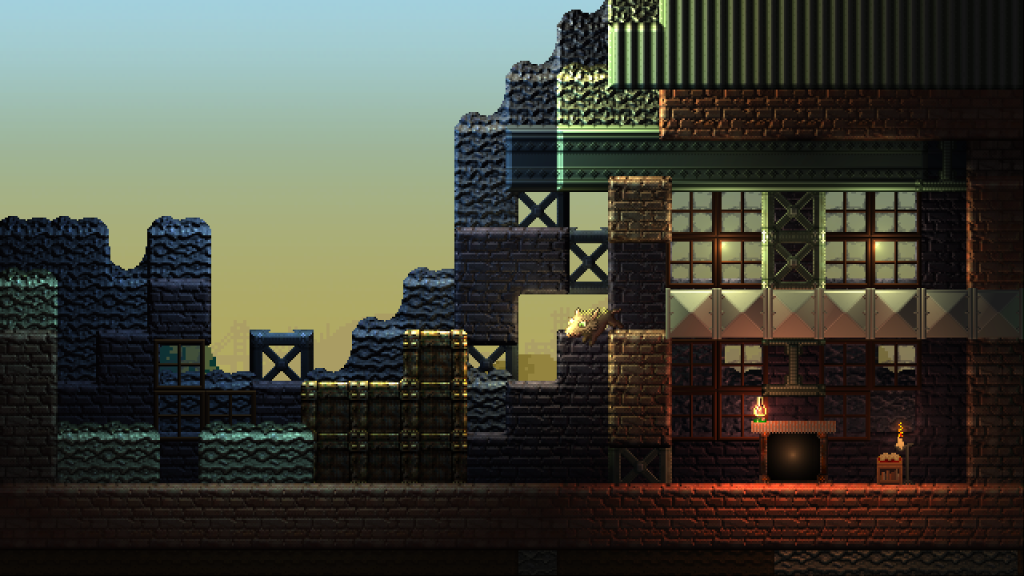 The saving grace for a game that demands such complexity and forethought comes in the other strange ability your boar has acquired, holding the backspace key allows you to undo your previous actions, with no limitations. The path taken here requires, at times, gratuitous amounts of trial and error before reaching your “Eureka” moment. The mere thought of having to exit a room, or press a button to reset the room to its starting layout is far beyond exhausting to me. This solution serves to cover what could have been a severe shortcoming, and prevents the game from becoming too monotonous too quickly. 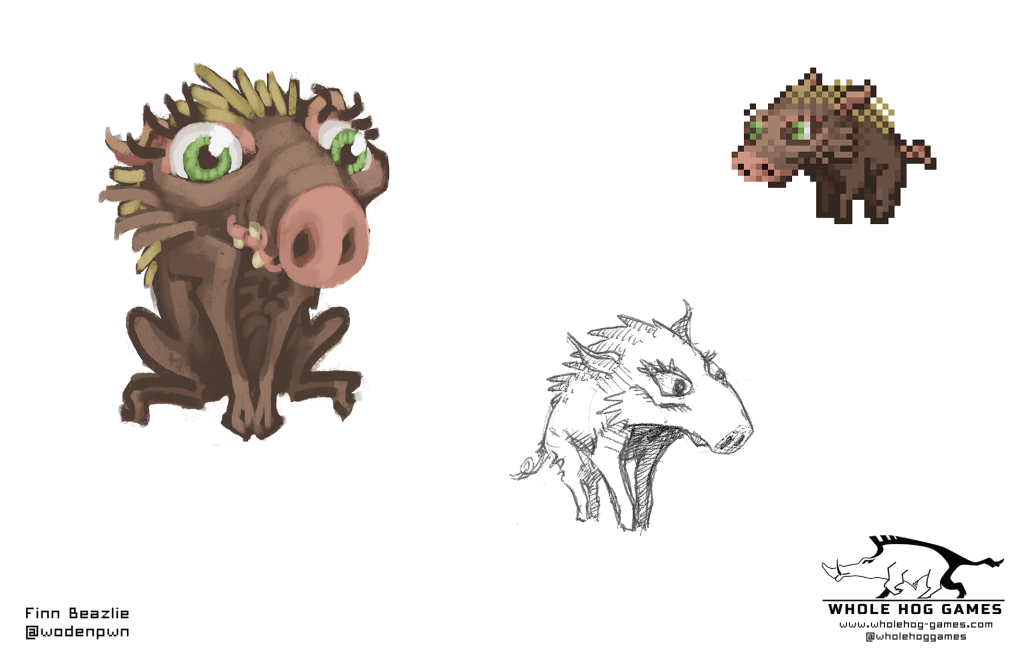 This is all wrapped up in both an attractive aesthetic and a strangely compelling story. It starts innocently enough, you select one of two boars (identical in nature, no change in ability). While out in a peaceful forest, you stumble upon a batch of landmines that end up sealing you in a strange underground labyrinth. This offers a brief introduction to the game mechanics, before a rocket quite literally inserts you into the main story. You pop into a vault (now empty) and find yourself in the employ of the Full Bore Mining Company. Their vault has been empty, and you have been deemed the primary suspect. The opulent boss of the company demands that you work of your assumed debt, and you’re sent into the mines for that purpose. Simple.

But this isn’t the entire story by a longshot. These caverns are vast beyond imagining (seriously, I was very impressed by the sheer size of things), and filled not only with bits of mining equipment and unusual employees, but strange, ancient labs and bits of ancient history. Full Bore rewards the vigilant and thorough with various pieces of lore that provide an entirely separate, and oddly poignant story that brings up some fairly difficult ethical questions and hints at some far greater happenings. The characters you encounter, despite their somewhat limited dialogue and the occasional case of so-similar-it’s-hard-to-tell-them-apart syndrome, are unusually vibrant and interesting—for a bunch of dystopian boars. 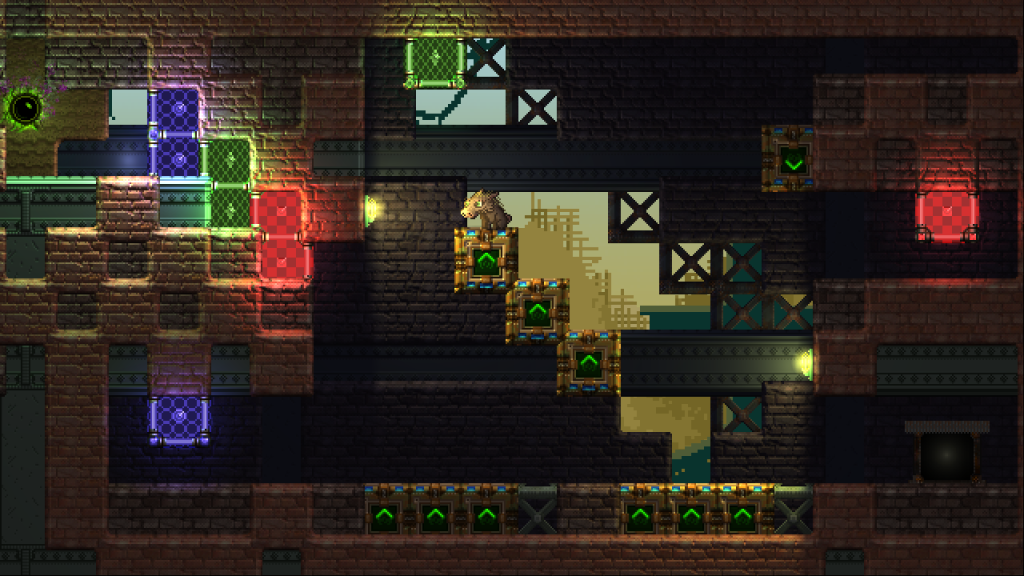 The game sports a 16-bit look that would be right at home in the early 90’s. And although the game is pretty much entirely tile-based in its construction, the environments are varied enough to keep any one aspect of the the look from going stale. Your silent protagonist boar even displays a curious amount of personality in her various facial expressions and body positioning. The space you occupy can range from claustrophobic to intimidatingly large, and sporting no shortage of crevices to look into and deep pits to explore.

That’s not to say the game isn’t without its issues, though. The levels, while expertly designed, are poorly represented on the in-game map system, making it difficult to pinpoint particular locations within a specific area. While the map holds useful information that’s available at a glance (percentage of gem collection in an area or if there are any doors you haven’t yet entered, etc.), it can get a mite overwhelming, to look at after a while. The game offers no listing of one’s primary objective, either, resulting in an almost unforgivable amount of time spent moving back and forth through these caverns to figure out what step or doorway you might have missed.

The controls also leave something to be desired. Being tile-based, Full Bore traditionally doesn’t demand high speed efficiency or precision in its button pressed, but shows some critical flaws when those scenarios inevitably appear. This resulted in more than a few rewinds and frustrating moments when I wanted to, say, dive off a small cliff quickly to ensure I was prepared to move a block out from under some other falling obstacle. Unless you’re pressing your keys correctly, you might never jump up on said cliff. Even then, to leap off requires what feels like an eternity as your boar peers over the edge in some sort of terror before finally leaping away. I understand this is a method for preventing hasty players from leaping to their doom, but the instant and unlimited rewind already implemented, keeling over an edge would, I think, be less frustrating than these unresponsive controls.

The lack of a sort of primary objective indicator means that any appreciable gap between play sessions can severely impact your ability to jump back in without getting lost. In fact, the generally ethereal style of the game is far from conducive to ease of navigation and clear progression. It takes a near godlike amount of patience to be able to marathon through the game, especially in the later stages when things get really complicated. The game reached a curious point where, with indie size and budget, it managed to fall in to some of the AAA class pitfalls of open-world games. 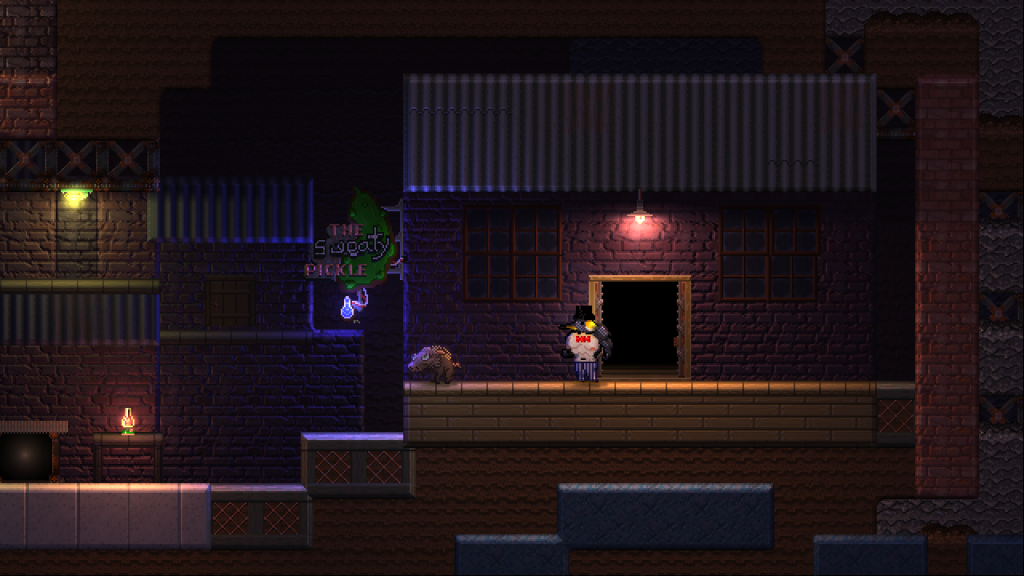 Even with these flaws, though, I think that Full Bore has achieved something very interesting. Its subtlety and soft-spoken nature are a breath of fresh air in the face of so many edge-of-your-seat action games. The look and feel of the game draw you in and the intricate caverns keep you there. It certainly doesn’t feel like an award-winning, landscape-changing experience, but encapsulates much of the spirit of the indie darling in the best ways: taking older aesthetics and presenting them in a truly intriguing way.

You can grab Full Bore on Steam for PC for $14.99 (10% off at the time of this writing). Check out a trailer below and get your tusks ready for some digging.