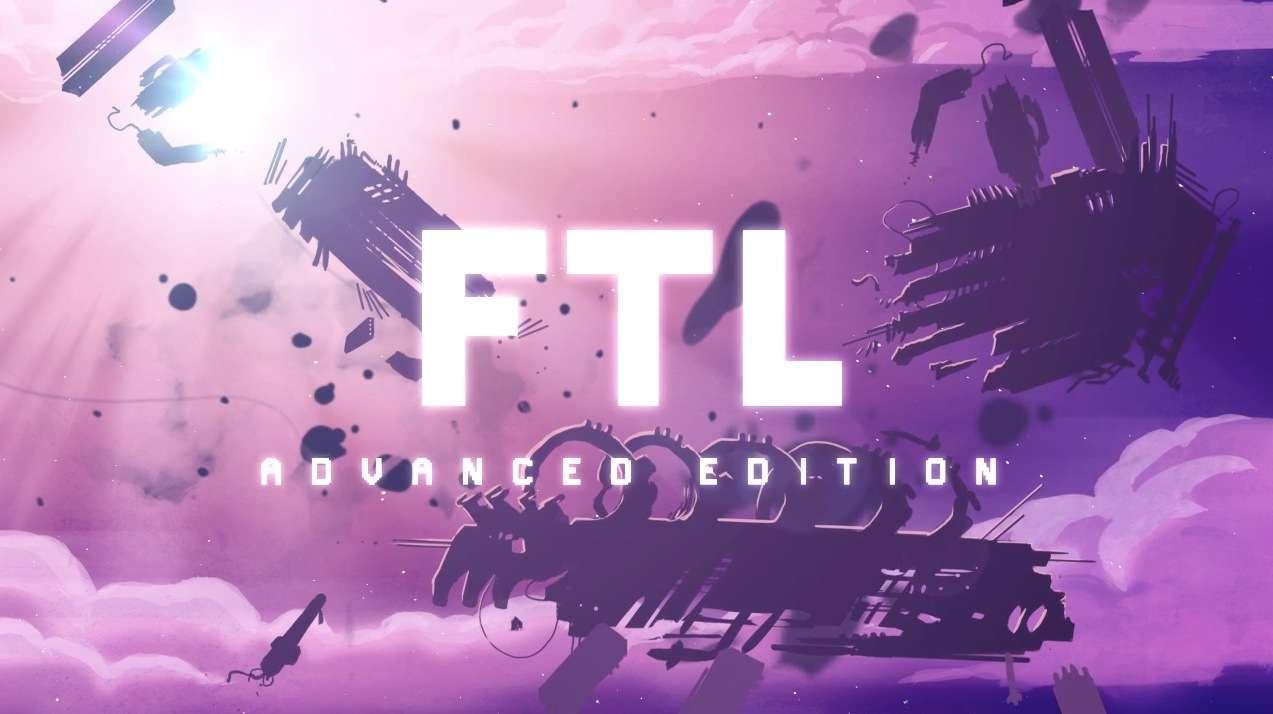 I will admit, I didn’t pick up FTL: Faster Than Light right when it came out—far from it, actually. I had always been intrigued by the cartoony visuals and the very idea of the game. A deal came up and I finally picked it up, loaded it up, enjoyed the catchy menu music—

Then I woke up sixty hours later—thirsty, emaciated, and completely satisfied. Every encounter was its own action-packed, life-or-death puzzle. The random encounters and events made for intense replayability, and the utter challenge of the whole thing got my juices flowing.

130 hours in and I had all the ship layouts unlocked, a hefty number of Normal difficulty victories under my belt, and familiarity with pretty much anything the game could throw at me. But now that’s all changed.

Enter FTL: Advanced Edition, the free (See: FREE) expansion to what was already an outstanding experience. Perusing various websites shows that the developers were very active in receiving the players’ feedback, and while there are always fears with any gaming darling for an update to somehow ruin the experience, and I’m quite pleased to announce that this is completely the opposite of case for Advanced Edition. 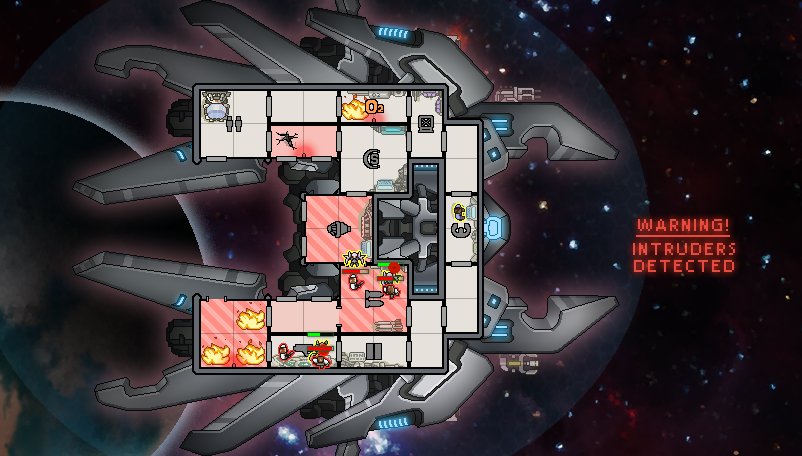 The expansion includes many of the things you would expect: more events, more equipment, more enemies and the like. But this one takes it much further, with many new ship layouts, loads of UI improvements, and even an entire new playable race of aliens.

The Lanius are an anaerobic pseudo-cyborg race of scavengers, roving around abandoned star systems consuming old wreckage and adding the parts to their ships. Their bodily processes quickly consume the oxygen in a room, giving them a unique method of interacting with fellow crew members as well as hostile boarding parties.

The events surrounding the Lanius are at once horrifying and oddly hilarious and touching, at one beacon you’ll find a group shredding the wreckage of a forgotten battle, tearing giant metal corpses to shreds to integrate into their systems, while other interactions are based on comical misinterpretations of common idioms: your viewscreen will light up with enemy crews literally waving white flags in surrender, or you’ll purchase a “translator” from a roving mercantile batch of Lanius, which just turns out to be a Lanius that knows how to speak English.

The Lanius not only encapsulate these new elements, but their ships are also rife with the newer ship systems and offer a fresh way to approach your old objectives of blasting pirates and rebels into hunks of scrap. Most notable is the new hacking system. By using a drone part, you can seal off a room of the enemy ship and disrupt a single system for a limited amount of time. Almost every system has a unique effect: draining power from the shields or weapons, dropping their evasion to zero, making an enemy med bay harm instead of heal, or undoing the various harmful effects of other enemy systems.

Rather than starting with a standard med bay, the Lanius start with a clone bay. Occupying the room offers no tangible benefit, instead healing crew members by a set amount per jump, and most impressively reviving dead crew members after a short period, though their skills are a little worse for wear as part of the process. This system might have the most prominent effect on how you actually handle your crew. Sending suicide squads over to the enemy ship becomes completely viable, less care need be taken in cutting off your weapons fire when an away team is murdering the opposing crew. Even once dangerous events that kill crew members are mitigated, as your perished member revives soon afterward. The clone bay can be a mite finicky at times, however: if a crew member dies while the system is unpowered or damaged, and you have mere seconds to remedy the problem (unless you have the right augment) before the crew member is forever lost. 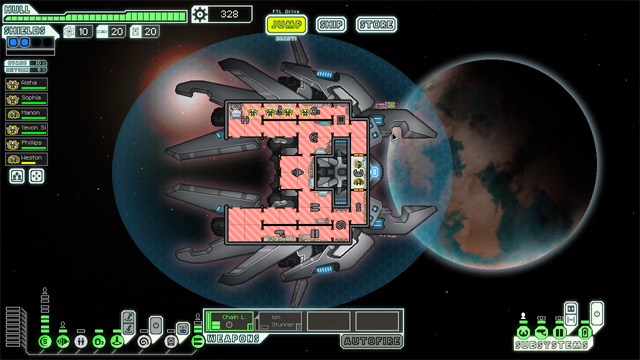 The new mind control do pretty much exactly what they sound like they do, granting temporary autonomous control of an enemy. Take over the opposing engineer and watch them rip apart their own FTL drives, or turn the mantis of a boarding crew against their compatriots. A new battery backup subsystem also lets you squeeze some extra juice out of your reactor for a limited time.

All these systems are backed up with a wide accoutrement of weapons, augments and drones. Some weapons allow for the storage of additional charges when delaying firing, allowing for more powerful burst or sustained fire. Others periodically reduce their refire time the more they’re fired. Ion stunners can temporarily incapacitate enemy crew members, and repair bombs allow for the instant reparation of ship systems. Fire beam drones, ionic boarding drones, automatic fire suppression systems, emergency respirators, there are literally hundreds if not thousands of new iterations of ship loadouts. 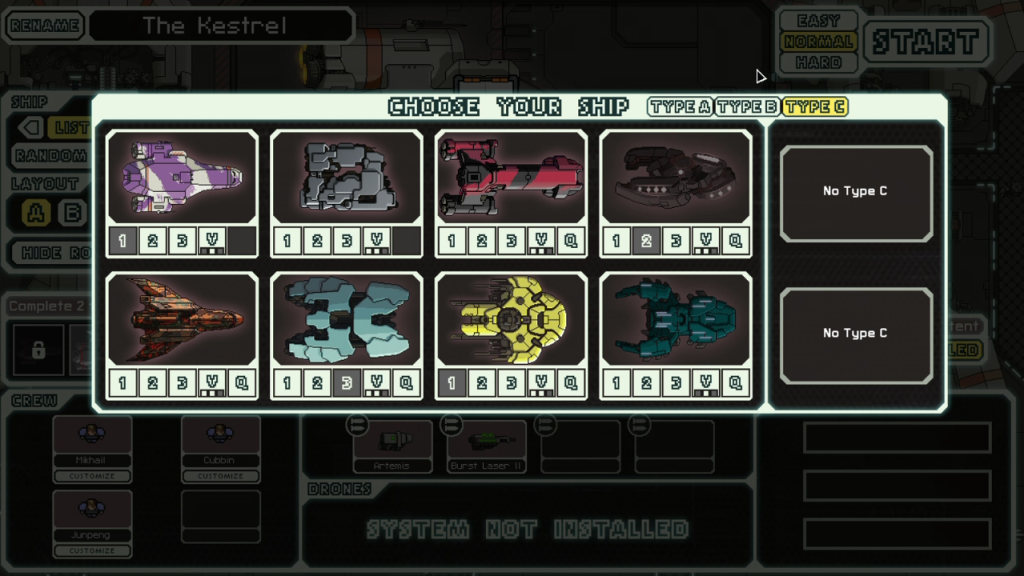 Plenty of other small tweaks have really polished the game to a fine sheen. Shops can have two pages of merchandise, somewhat easing the oft fickle RNG gods. Crew/enemy AI is now more specific to their race and characteristics (Rock men are no longer afraid of fire, etc.). Bomb weapons cannot miss when aimed at your own ship. One of my favorite changes is that several more systems can now be manned (sensors and doors), giving extra crew members more to do than stand around and fix things when they get trashed. Crew stations can also be saved, so that a simple keystroke can send displaced crewman back to their positions. 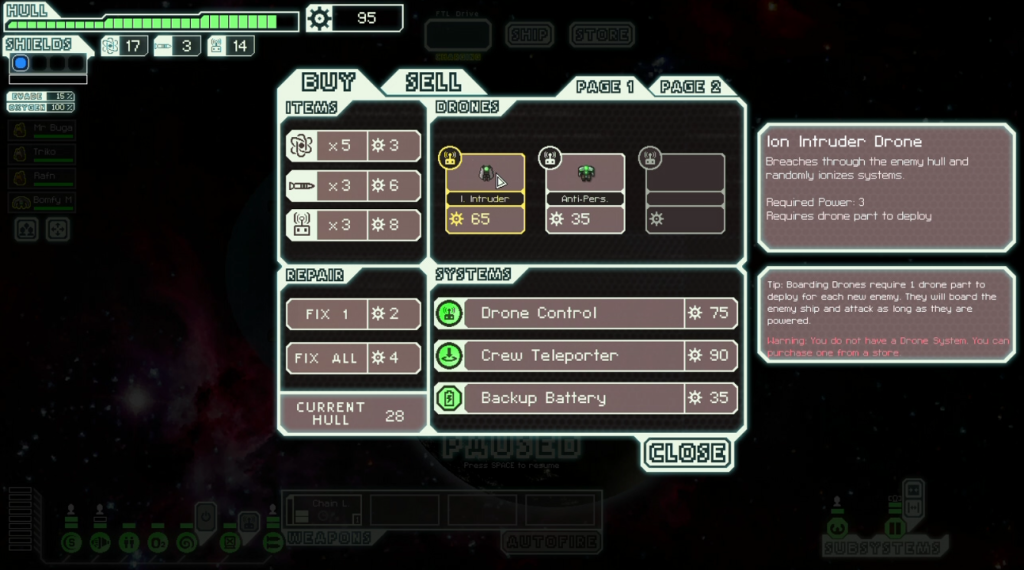 The UI has also been massively improved. The effects of crew skills are clearly marked (and Humans finally have a trait: they learn skills a little faster). Selections are more clearly marked, as are the results of encounters and events. There are more diverse models for all races, and crew members can be renamed mid-game, for a more personalized experience. And Ben Prunty’s new tracks are just as catchy and oddly captivating as ever. 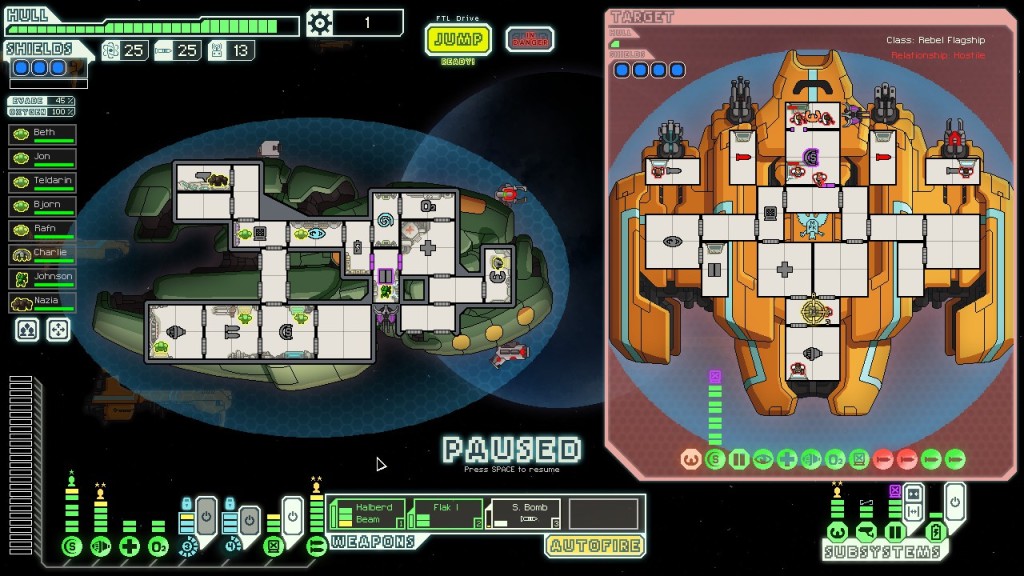 I would have called FTL in its original form perfect by any means, but it was a very compelling experience that captured Freespace-esque sci-fi action with a decidedly Star Trek feel. The Advanced Edition update went far beyond just adding content, but also mitigated any niggling issues that remained. The result is quite possibly one of the most effective gaming experiences crafted in recent memory. A true display of what dedicated developers with a great idea can do with community feedback and a sound head on their shoulders.  It is a game that I cannot recommend highly enough.