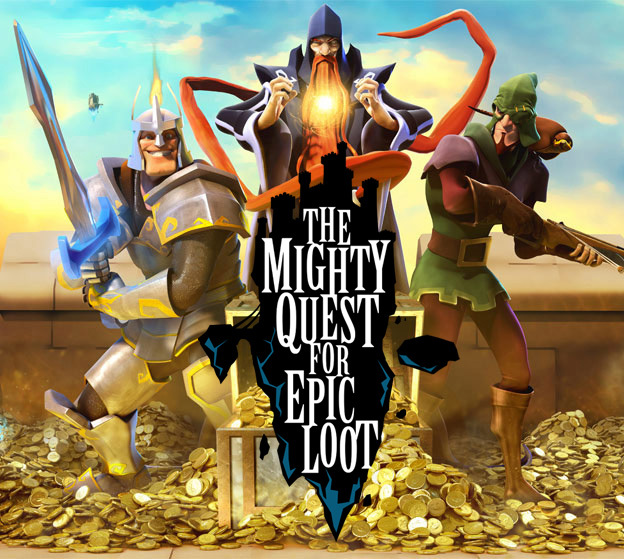 The call of loot is a powerful siren song for gamers the world over. Countless hours have been spent in dank caverns, sprawling keeps, haunted forests–even the depths of Hell itself– in search of objects of great power, with which to utterly destroy your enemies.

While games such as these have been traditionally aimed at some pretty intense gamers, those willing to sink large swaths of time and gratuitous effort into planning their skills, prepping their builds, and hunting down hordes of beasts in search of the only thing that can satisfy them: treasure. Glorious, shiny treasure. 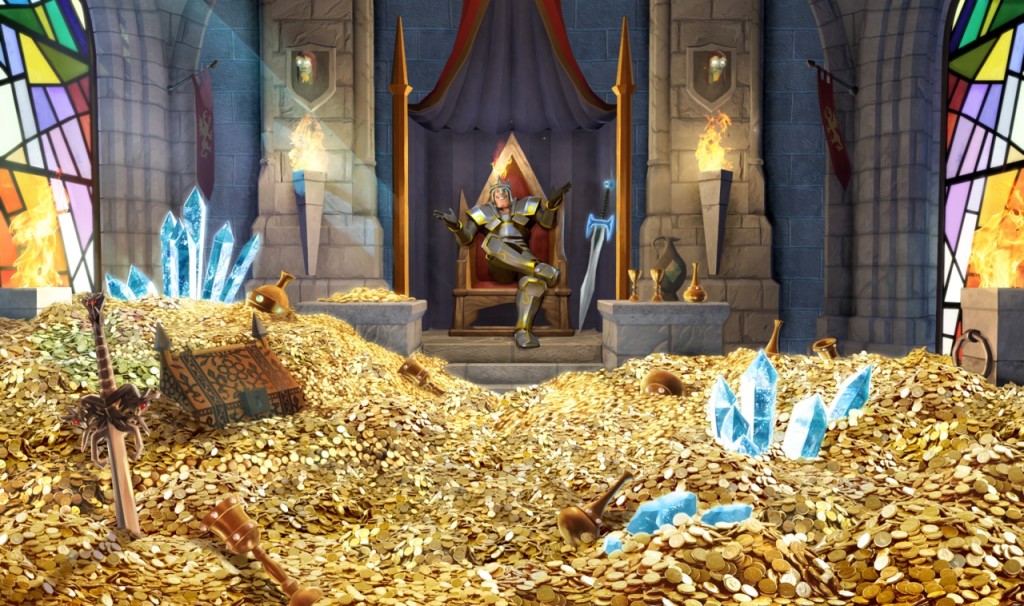 Enter Ubisoft’s The Epic Quest For Mighty Loot, an attempt at a kinder, gentler, and all around more accessible treasure hunting endeavor.

The world long ago gave in to its desire for acquisition of material goods. A good public relations manager became incredibly sought after, and the display of one’s worldly wealth trumped all other aspects of society. Eventually, the richest occupants left to form their own kingdom in the sky: Opulencia. You begin your adventure as a new arrival to Opulencia, prepared to begin pillaging other castles and make a name for yourself, with the help of your new sponsor.

The Epic Quest For Mighty Loot lives up to at least one large part of its name: the game is all about grabbing more items and building yourself a large castle. You spend your time raiding castles for gold, energy and items, and use them to procure a powerful arsenal and construct a labyrinth to protect your goods while you’re off pillaging. You might say that Epic Quest is like Diablo had a baby with an unnamed tower defense game, and was raised as an orphan by any one of a number of free-to-play mobile games, all with a dose of humor injected for good measure.

It’s important to remember that this game is still in beta. Things can still change, though the overall structure is bound to be final. That being said, I feel as though The Epic Quest For Mighty Loot has a long road ahead of it. 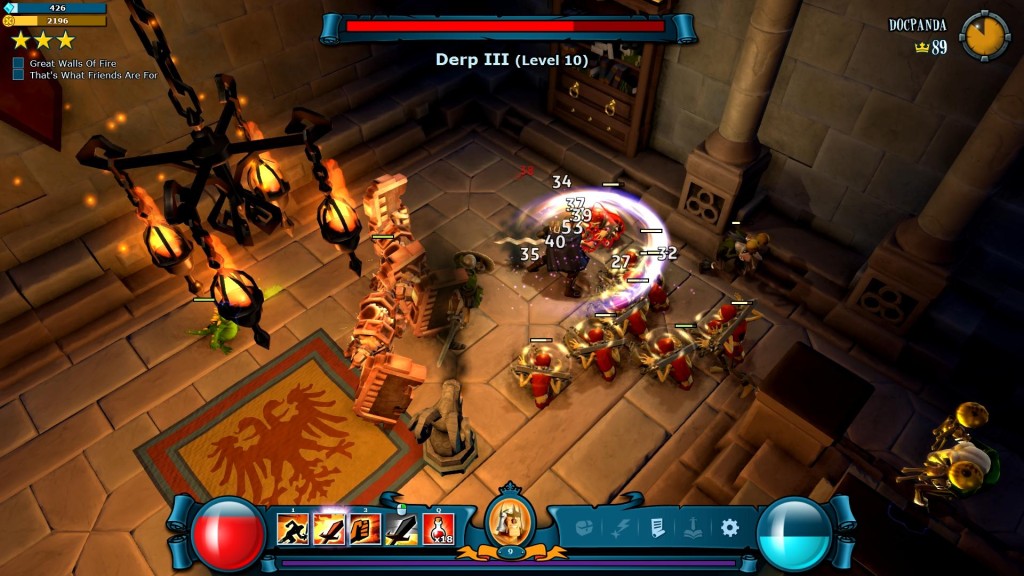 To begin, the game features a brief tutorial in combat and management of your castle. You select a character class between a tanky knight and a ranged archer, with premium currencies allowing the selection of a mage or the runaway, a low-health high-damage melee class.

Combat is simple and easy enough to accomplish, but constantly feels sluggish and unresponsive. Basic attacks are fairly slow, and there isn’t much to consider when it comes to enemy attacks and variance, there are really only physical and magical attacks in terms of damage types. Your character slogs through hallways, smashing various enemies and picking up gold and loots a few chests at the end of the dungeon. That’s about all there is to assaulting another castle.

Skill progression is linear and pre-determined, as are stat boosts as the player levels up, so outside of selecting which skills are active (you can have four at a time of perhaps eleven available), there’s no sense of creating a “build” for your character. 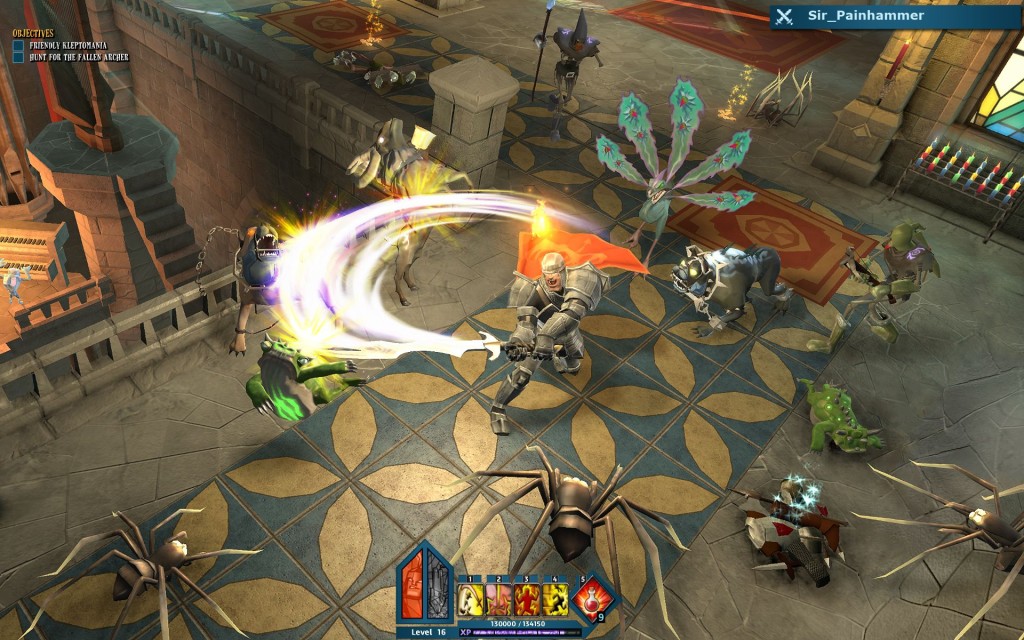 And considering that the game’s title is all about grabbing loot, item variety is curiously low. While a few have different modifiers here and there, you’re mostly finding slightly improved versions of the same items. It wasn’t uncommon for me to come out of three or four raids with a (very limited) inventory filled with duplicate items. The game at least makes identifying which pieces of gear are better than what you have equipped mind-numbingly simple, though the trade-off is that weapons (the most crucial loot you find) often possess very limited sets of unique modifiers.

The other end of the game involves creating your own castle, which players can then raid in an attempt to fill their coffers at your expense. Unlike many other games that feature this sort of give-and-take attack and defense, being attacked by other players does not intrinsically detract from your wealth, so there’s less to lose in that regard. But given that the creation of levels have been largely relegated to the players, the fact that there is little motivation to create a truly difficult castle means that most castles are boring an uninspired.

By using the gold and life force acquired by raiding other castles, you slowly fill your castle with traps and monsters, as well as a few resource-producing structures for when you’re not actively playing. One thing I did like about castle production was that a layout has to be “validated” before it becomes public, requiring the creating player to successfully complete their own level. The speed with which the level is completed becomes a sort of bonus objective for attacking players, and any monsters not slain in your own run will be asleep for your enemies. This is a good method for ensuring that players will be unable to find some kind of impossible level, as they would be unable to finish the level themselves. The actual process of creating your level is simple enough to understand, and offers perhaps the highest concentration of customization in the game. Monsters can be improved through a research station, and certain monster types can be given different behavioral paradigms in an attempt to confuse your opponents.

Perhaps the aspect of the game most worth mentioning is the presentation. The game features fairly stylized visuals that certainly won’t win any awards, but can run fairly easily on basic hardware and lend a lot to the lighthearted aesthetic of the game overall. The comical writing has a lot of potential, though the narrative is generally sparse. The enemy types range from the expected orcs and cyclops, but also include chickens and strange zombies called “derps”. The characters quip constantly about their antics, your PR guy’s motives are laughably obvious, and the world at large is unique enough to remain interesting, even if it isn’t explored terribly much. 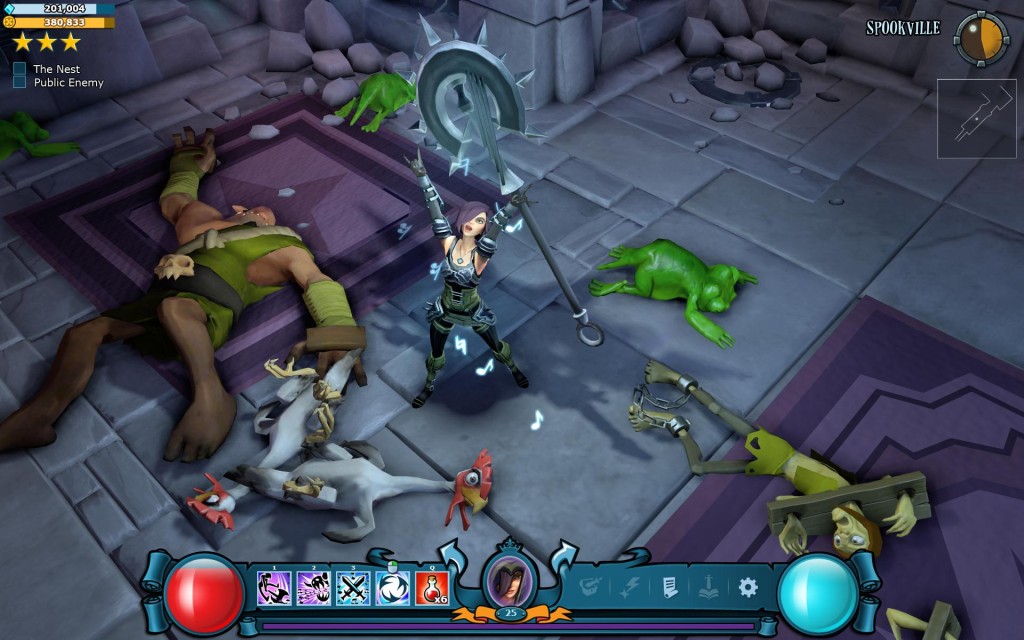 The final concern that I’m sure many people would have about a free-to-play game like this (especially one by a major AAA studio like Ubisoft) will be how your money interacts with the game. While two of the three currencies available in-game are easily acquired through raids and quests, the third—gems—are only rarely acquired in game, and are primarily a premium currency purchased with real funds. Unlike many other games, however, Epic Quest dodges many gamers’ worst fear, the pay-to-win model, by almost exclusively offering aesthetic changes through gems. Gems allow for castle skins and character skins, and also allow for the unlocking of the other character classes. The closest thing to direct assistance that can be purchased with gems are increased gold, experience, and life force gains for a timed period.

All -in-all, I’d say that The Epic Quest For Mighty Loot is a game that has a chance, but also has a lot of work ahead of it to get there. While the idea of a simpler, most accessible Diablo-esque game is certainly valid, the fact that this game is like a cake that has only been half-baked doesn’t bode well. It could do with a bit of a speed boost overall, a larger variety of items, and a stronger motivation for creating complex and interesting levels, especially considering that the lion’s share of the levels are being made by the players themselves. As the game is still in beta, it remains to be seen what changes will be made.

The game is completely free, which is always a bonus, though. As it’s in open beta, anyone can get involved. Just jump over to www.themightyquest.com and get signed up if you want to give it a chance.