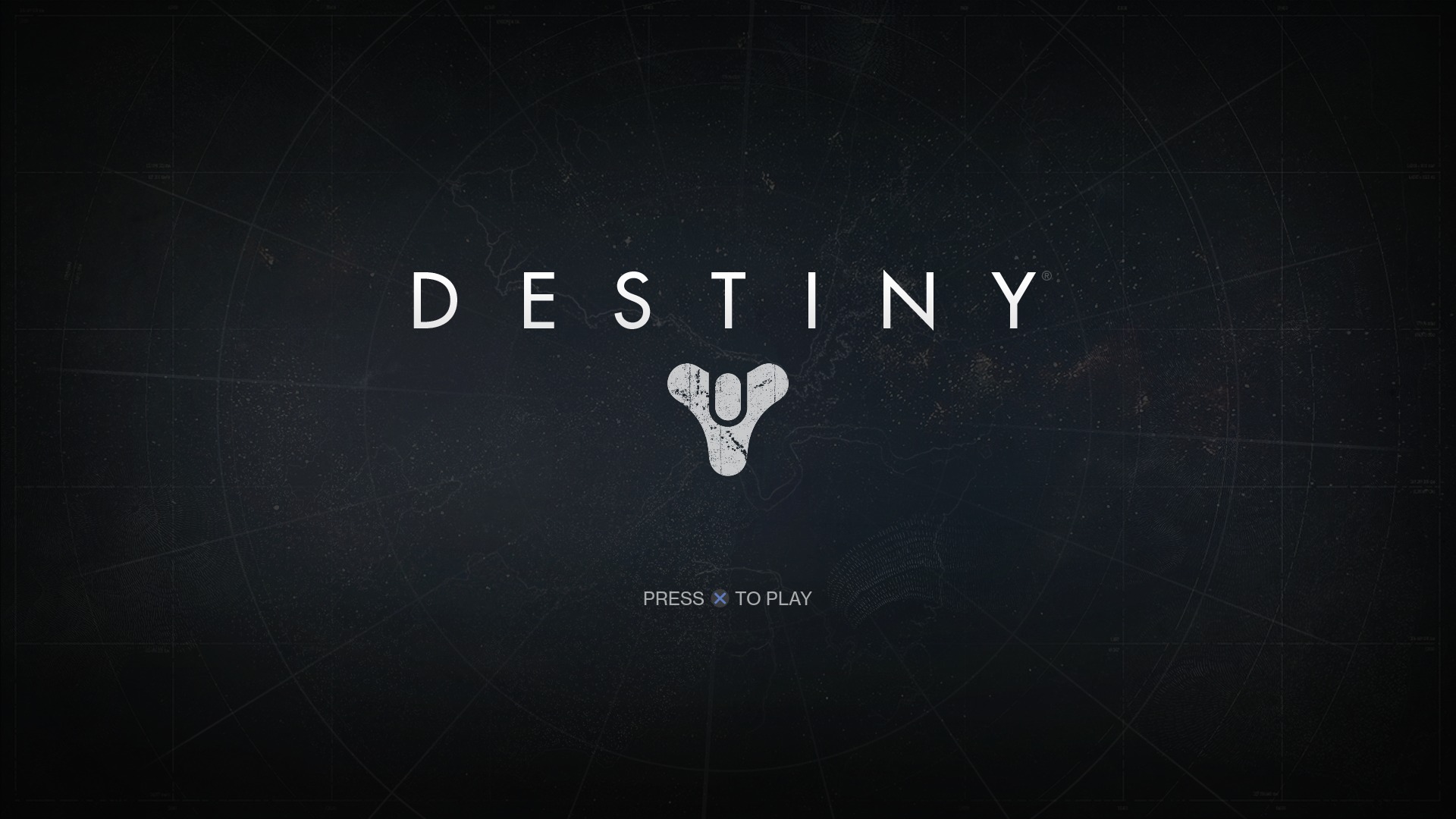 I feel like I’ve been a victim of a clever marketing scheme when it comes to Destiny.

Before the beta came out, I hadn’t given the game more than a cursory look when it was originally announced—a gut feeling I should have stuck with, it’s starting to seem. Just before the beta began, I caught a glimpse of some gameplay footage I hadn’t seen before, and immediately snagged a beta key, and had plenty of things to say, most of them good, but I’ve been blinded. I’ve mislead you, and having the full product in my hands free of the hype that had built it up has given me a lot more time to consider what I’ve been playing and how it stands up to its peers—and it has been left wanting. 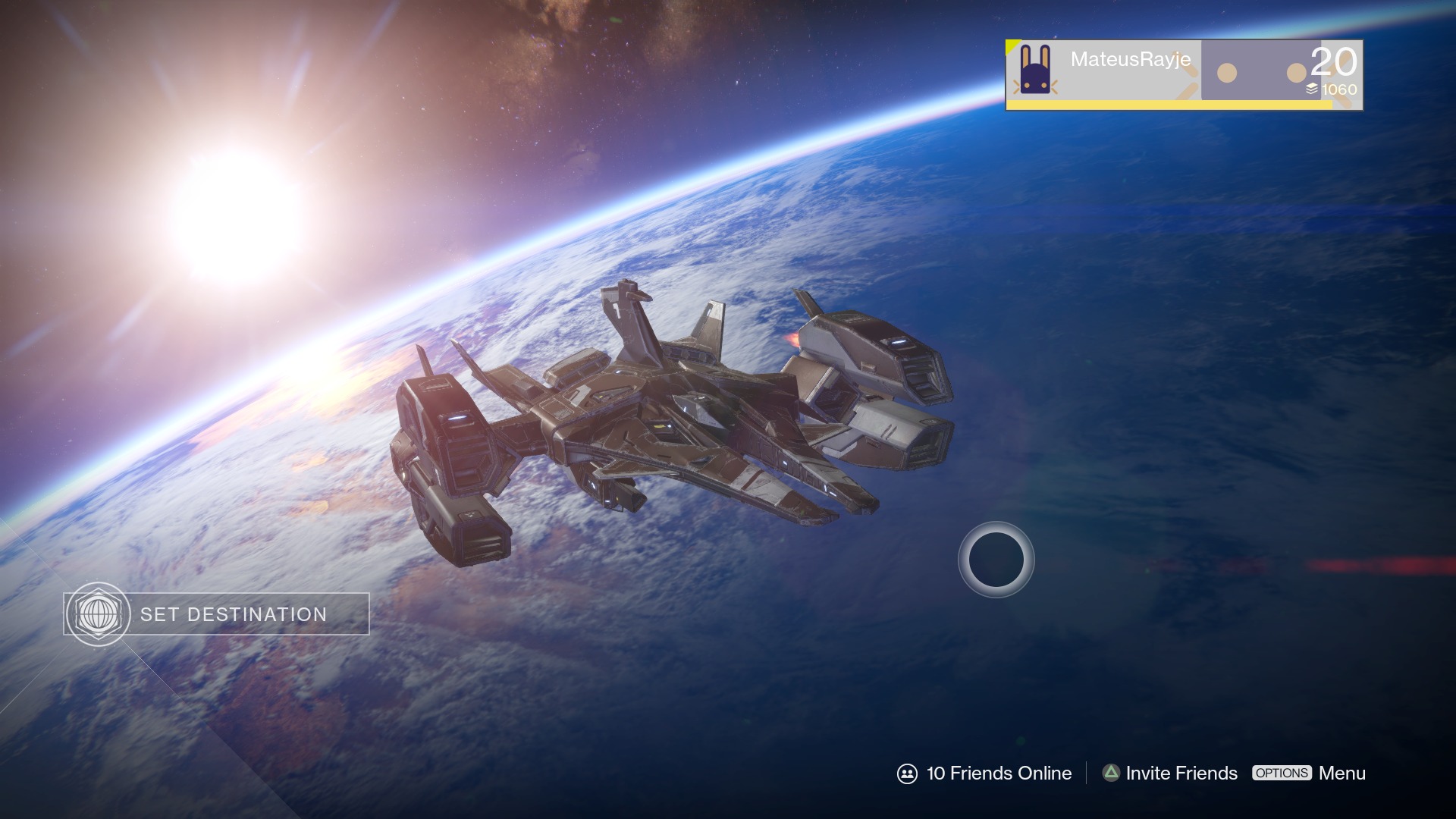 First off, let me correct my first mistake: Destiny isn’t an MMOFPS, as I’d originally considered it to be. In fact, Bungie has been fairly forthright in trying to quell calling it such. While it is  a first-person shooter that does have massively multiplayer qualities, what came out of the other end of pipeline cannot in good conscience be considered “Massively Multiplayer”, and is fairly rudimentary as a shooter at best.

Repetition is the name of the game, and while that may be true of pretty much any game ever, Destiny makes it painfully apparent that you’re there for one thing, and one thing only: shoot stuff. It’s dressed up like you need to do other things, but you really don’t. The game tries its best to cover its ass with subpar attempts at building tension and “large” maps, all mixed with a star-studded cast and a freaking gorgeous world, but it’s easy once you’ve had the controller in your hands for six or eight hours to feel that there’s no meat behind it. Unlock a planet. Do some story missions. Do some patrol missions. Run a strike. Unlock a new planet. Repeat. 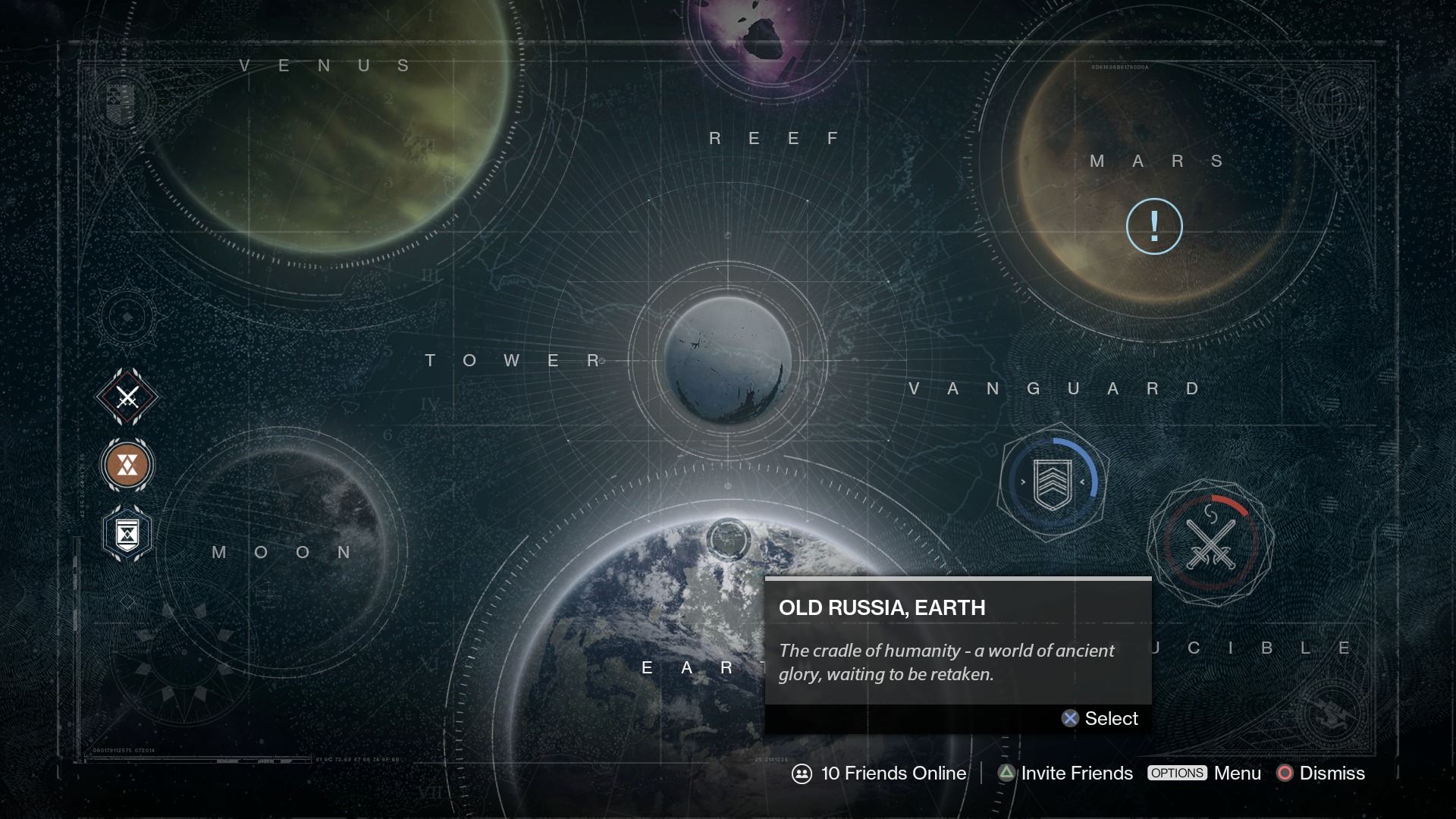 The narrative is paper-thin, but has great promise: it’s set in a strange future where mankind has grown near extinction in the face of a cosmic darkness, protected only by a strange celestial being known as the Traveler. It’s more of a science-fantasy than a science-fiction, with occupants of the Tower (the home of the Guardians of the last city on Earth) all speaking with strange reverence of the Traveler and more than a few religious overtones.

The mission structure is odd, with all levels on a planet taking place on the same map, but taking you to different areas, which are really just a few open areas separated by long corridors either underground or through canyons. The worlds aren’t really connected and things don’t really feel open in any sense, missing the MMO mark entirely, and falling only just shy of being a corridor shooter like any other Call of Duty game.

In the end, the story feels like it just picks up a thread, and then leaves it dangling, refusing wholesale to tie up any loose ends besides the primary line, which is still upsettingly short and empty. Destiny has ten year’s worth of planned updates, some of which are going to be free, but offering free pieces of the story to players later simply cannot be an excuse for the current state of the game. They didn’t release Destiny to us, they gave us part one of the game, one that equates to the minimum possible amount of substance to be qualified as a game. And it did this all with an absolutely massive budget.

Even the enemies are disappointing overall. There are four different factions you’ll be dealing with as you cruise around the solar system, and each has a sort of theme and method for dealing with them. Delve any deeper than their aesthetic differences and critical hit locations (in the Vex’s case, anyway), and you’ll find that most of the units are basically just the same four or five different unit types: the worthless swarm ones, the slightly cooler ones, the really big ones, the ones that fly, and the ones with fancy shields or armor. Even worse, these enemies behave with the intelligence of five-year-olds, never pressing advantages or coordinating to work against you. For a game predicated on having multiple players running about these story missions, the fact that I don’t need other players’ support to deal with things like giant aliens with impenetrable shields is just disappointing. I should be dealing with a swarm of Legionaries while the Phalanxes come around flank to flush me out of cover. Instead, they all just lumber up the same paths and shoot indiscriminately. 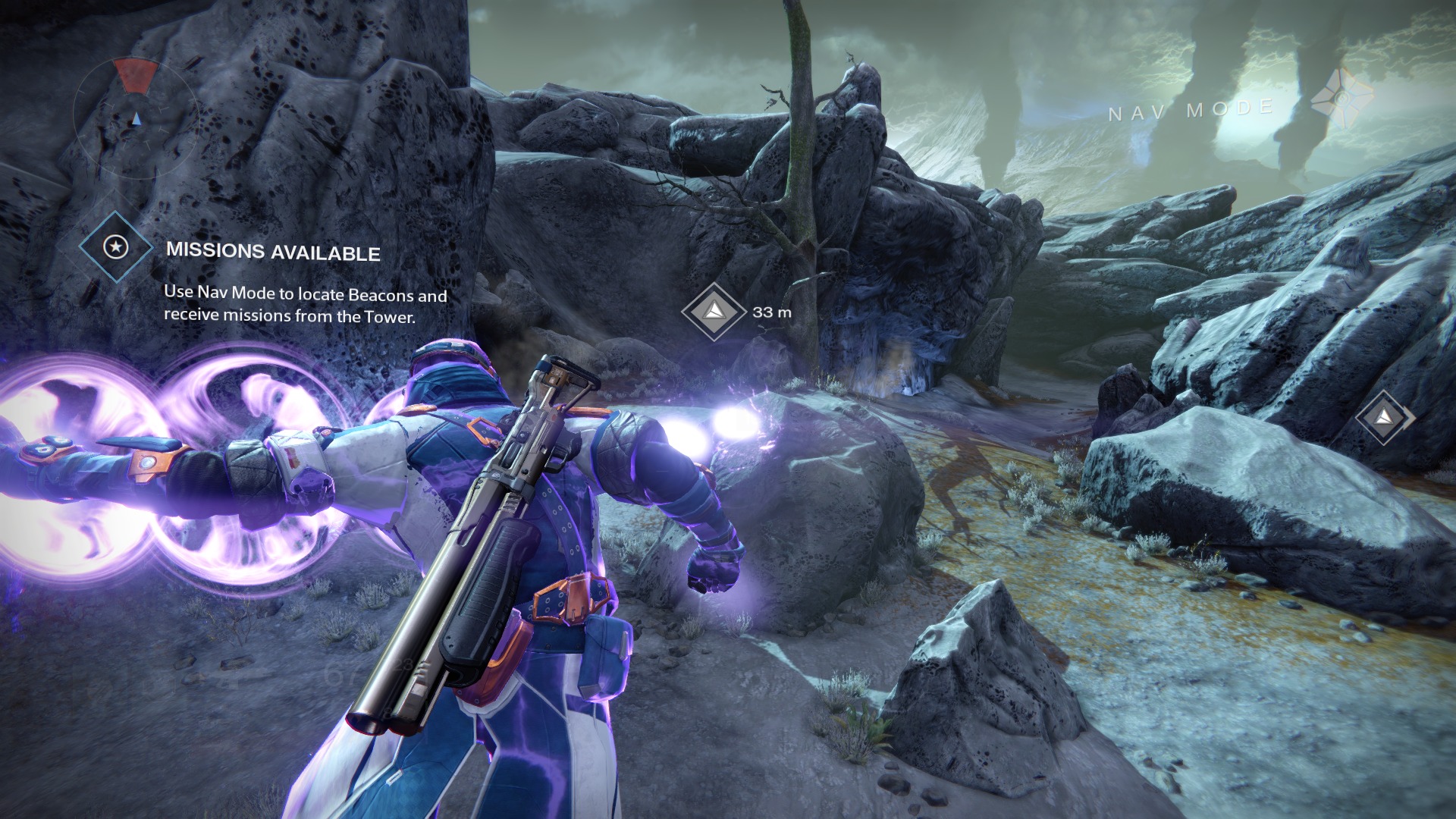 The game certainly has RPG elements in the form of gear and experience, but in the end there’s just not enough of it to feel justified. I hit the level cap in about a day and a half (and that wasn’t entire gaming marathons, it was only slightly more play time than I might spend on an average game), at which point the only method for “advancement” is to collect rare gear that increases your light level, essentially allowing you to reach up to level 26 or so, but only by virtue of what you’re wearing. The problem is that obtaining this gear requires you to take part in a particular set of strike content, of which there aren’t many, and you’ll have to grind through these over and over and over for uncertain rewards.

Otherwise you’re relying on drops for gear, and the entire system is a garbled mess of RNG. Low-level enemies drop gear equivalent to stronger ones, so oftentimes, there’s not even a point to doing end-game content, but instead finding a secluded corner with a decent enemy spawn rate. After killing thousands of enemies, you might end up with a few “Rare” items, and maybe one “Legendary” one, but upon decrypting these to learn what they are, expect your rare items to be carbon copies of what you’re wearing (but slightly worse) and your legendary to either be a rare in disguise, or be for a different class, rendering it useless for anything but parts.

There’s not much of a sense of putting together a build for your character, either. There are only three classes, each with a secondary subclass that unlocks once you reach level 15, and still requires you to start from scratch in terms of abilities. While each class might seem like they serve a particular role in combat, this simply isn’t the case—there aren’t really fundamental differences between how these classes function in strikes. In a traditional MMO, you might need to have a healer, a tank, a direct DPS, and perhaps a support class. In Destiny, don’t worry about it: any kind of class combination will be pretty much just as effective as any other in a strike. You have a few options in that you can only have one ability of a particular kind active at once, i.e. do I want my Nova Bombs to track enemies, or do I want them to leave a DoT vortex where they hit. 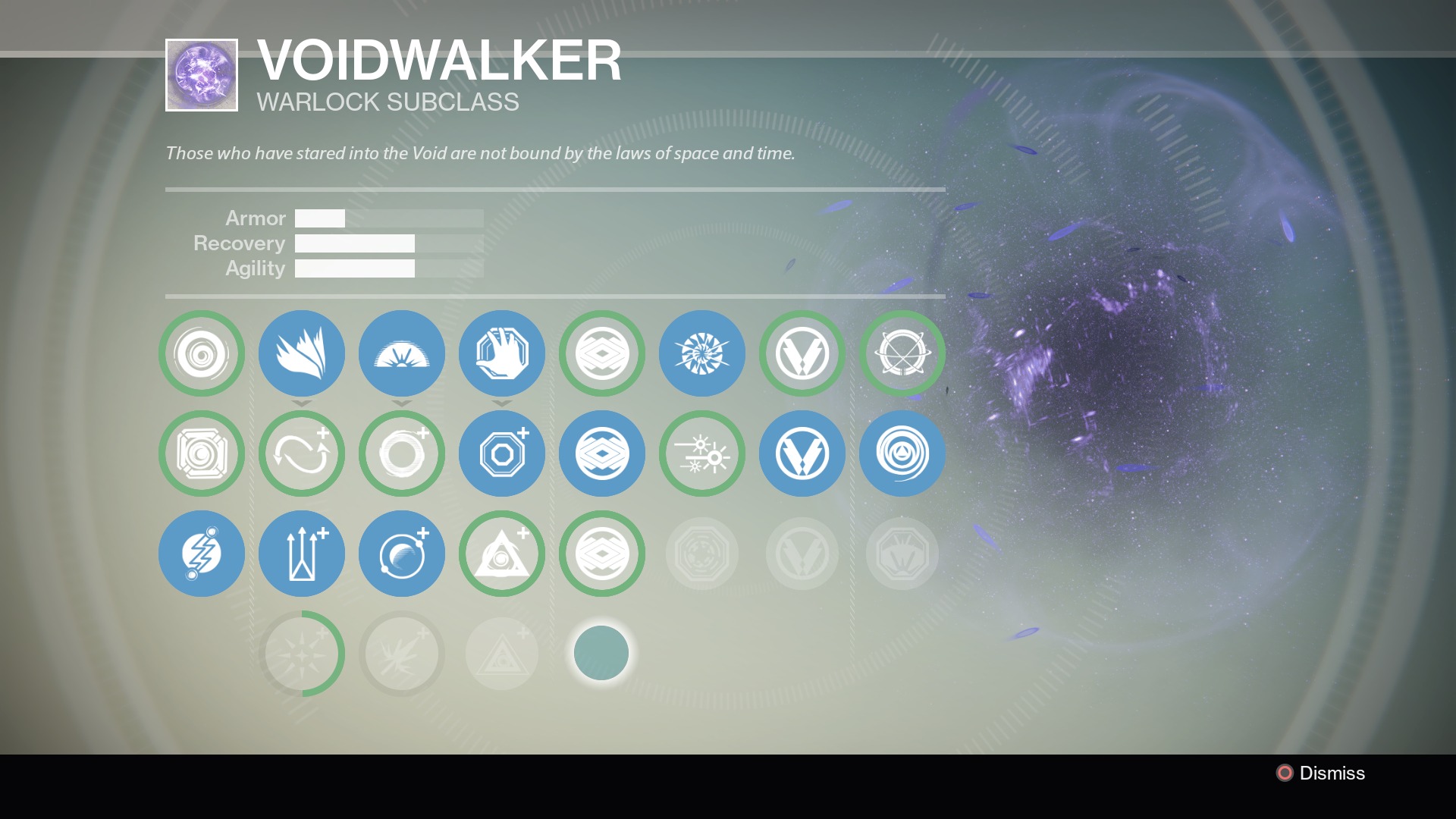