In the modern age it’s easy for anyone to have an opinion. Information transfers quickly from place to place, and, of course, invariably leads to malformed notions of expertise based on secondhand information and poor research skills (See: The Dunning-Kruger Effect).

Now, I’m not a political person by any means. I think it’s important to keep abreast of the issues, and I have some opinions of my own, but I don’t think I know what’s best for the country, or even many of the ins-and-outs of how several parts of our government function. I have plenty of friends, though, who like to cobble together large strings of buzzwords and come up with the occasional (completely baseless and harebrained) idea that will solve major crises in the country. And I have discovered the perfect tool to counter those people.

Enter Democracy 3, a game by the guys over at Positech Studios (known for the Gratuitous Space Battles game, which I highly recommend). The concept is very simple. You assume the role of the leader of a given country and, after modifying a few starting conditions here and there, you play out your term, enacting policies and programs and trying to appease the voters to win reelection. 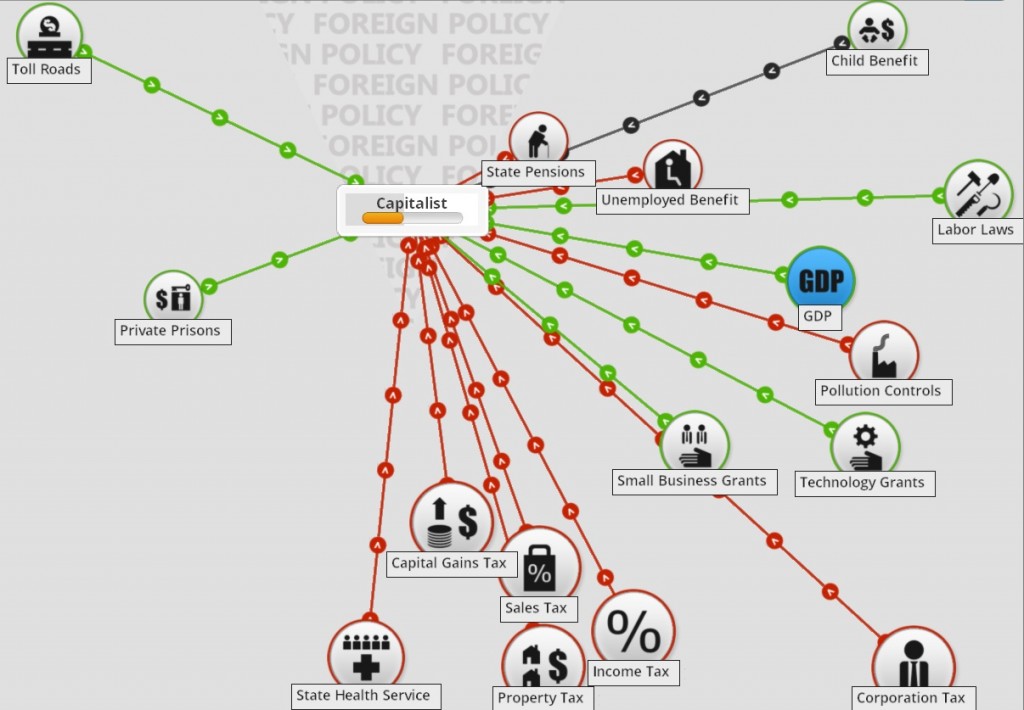 Your first reaction is probably going to be to live out all of your political fantasies. This is going to be a big mistake. I managed to destroy the country’s credit rating, drive businesses out of the country, and promote antisocial behavior in my constituents. But I did manage to promote some nice environmental programs in the process.

You see, out in the world you have a tendency to surround yourself with like-minded individuals, and while you certainly interact with others of other political affiliations, those interactions tend to follow certain rules and draw the focal points of  issues to a very small point. Something like Democracy subverts those norms, and forces the player to consider more than one aspect of any given issue, as well as work against one’s own philosophies for the good of everyone, not just people who you happen to like or have to sit near at the office. 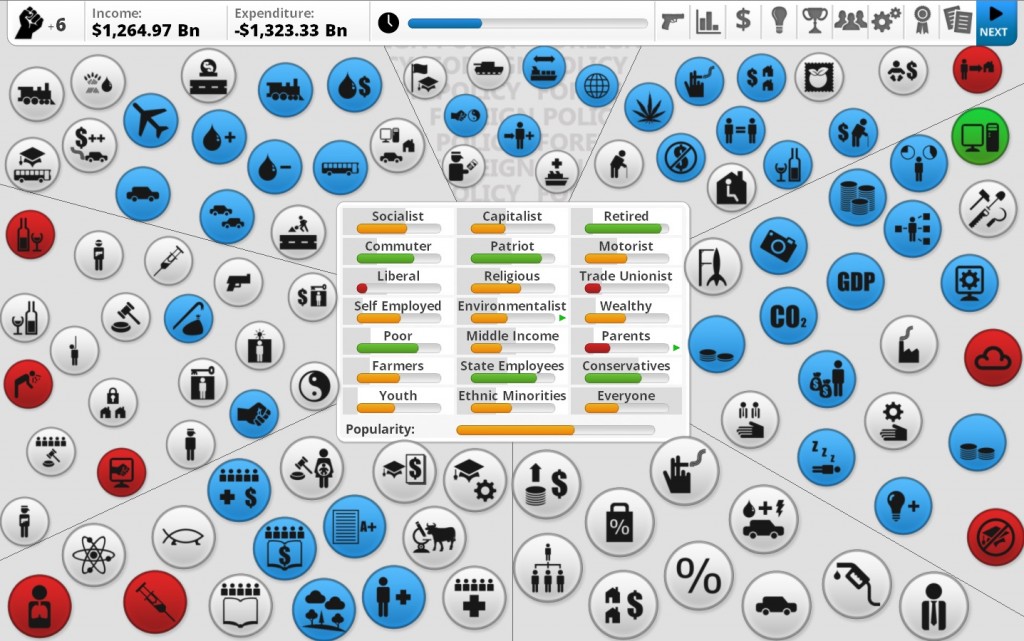 Luckily, to some degree, Democracy makes this simpler to do, once you’re willing to do it. The main screen you’ll be dealing with is a grid of graphs and circles. The graphs represent different sects of voters: the retired, parents, capitalists, and the like. The higher the meter, the more that voter approves of your actions. The circles each represent different issues, policies or scenarios. Hovering over any of these circles or graphs conjures up a series of red and green flowing arrows, quickly showing which factors are contributing to what.

In order to enact changes, you need two things: money and political capital. Gathering money is a fairly simple prospect, but it’s important to consider that money in the game does not operate as a pool, but rather on income and expenses. Overstep your income and you risk dropping your GDP as your credit rating drops. You can manage your money by reducing things like military spending or levying taxes. Political capital is essentially your ability to work through the legislative process. Every manipulation of policy requires political capital in varying amounts. You gain capital by virtue of your ministers. Higher loyalty from a minister tends to garner more capital, while experienced ministers can be harder to please, but can enact policy faster. 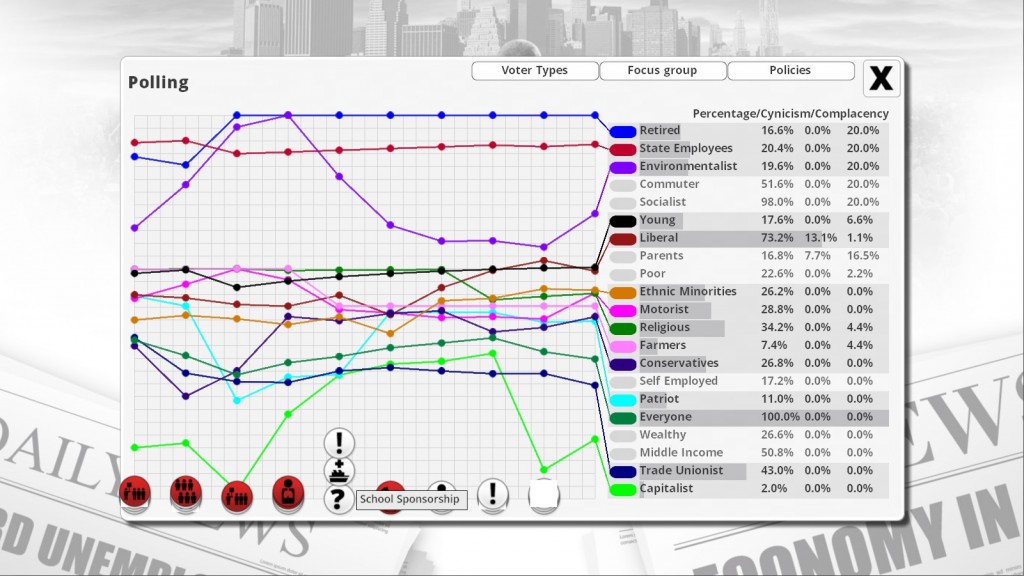 Other than that, the game is a series of graphs and focus group references. There is a lot of data to sort through, and some of it could be presented a little more clearly—the tutorial can only do so much in its limited space to explain all of these figures—and it can be difficult to learn exactly how to manage certain factors, especially when dealing with security threats (I was assassinated on my third attempt by a human rights group that I could not seem to appease).

The game is definitely not for everyone. Don’t expect stunning visual effects or action-packed sequences here. Politics is muddled business, expect to crunch a lot of numbers and make a lot of concessions in order to move forward. Every turn is a quarter of a year, but a game can still feel like it’s running really long, especially when your decisions start to backfire. The good news is that the simple UI (which contains all the complex data) would probably run on a toaster, and is the kind of game that really doesn’t require intensive focus, it provides a nice distraction.

Democracy shines as a statement, I think. As a game, it is less compelling than most, but the way that it forces you outside your political ideologies and forces you to consider what other groups of voters might want or need is an enlightening experience, but not for everyone.