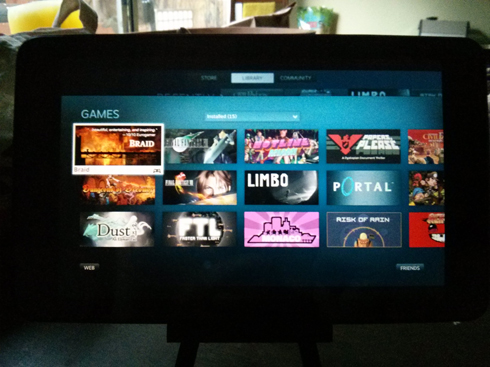 Dell’s Venue 8 Pro is one of several budget-friendly tablets which run the full version of Windows 8.1. Similarly prices tablets include the Lenovo Miix 2 and Toshiba Encore, both offering a full-Windows experience for around $300. We picked up one of Dell’s 8-inch tablets to test out its gaming mettle.

The Intel Atom Z3740D processor surprised us with its horsepower, providing a varied experience for the gamer. The addition of an micro sd card slot, a faux pas for many mobile devices, is a welcome sight as hard drive space is always a source of contention in the mobile world.

With several easy workarounds for it’s shortcomings, the Dell Venue 8 Pro is an attractive device worthy of a look from gamers. We delve into the device to show it’s capabilities and how you can make the most of it.

Given that the multitude of options with a full Windows 8.1 experience, there are many ways in which you can interface with the device. Even if you might not have a Bluetooth mouse and keyboard lying around, there are still convenient ways to get a great experience.

OTG Cable- Given the lack of a proper USB port this is an extraordinary wise investment for this device. It allows connection of any USB device such as a mouse, keyboard or gamepad.

Wired Xbox 360 controller- It works really well with Windows natively thereby giving you access to a variety games otherwise inaccessible without a full mouse and keyboard setup. Needless to say we’re more than a little excited at the eventuality of using a Steam Controller as well.

Smartphone – The fact that almost everyone today has a touch device lends itself well to the versatility of the tablet. Programs like Unified Remote opens a variety of doors by providing mouse and keyboard connectivity over either Wi-Fi or Bluetooth.

Bluetooth Keyboard, Mouse, Controller – From our own experience, the DV8P isn’t picky when it comes to connecting via Bluetooth. This is especially important due to it’s lack of multiple inputs. We were able to use an old $20 Bluetooth keyboard designed for a Nexus 7 and have seen a variety of Bluetooth gamepads work well on it..

Even though the tablet exists in a goldilocks-zone in terms of size, we found that it can make navigation on native windows programs like Steam cumbersome as they’re not designed with a touch interface in mind. In fact we preferred navigating through Steam’s store in-browser but were still forced to use the desktop app to get to our games.

Surprisingly it was through the use of Steam’s Big Picture Mode which made navigation through the store and our library a lot more intuitive and user friendly using either the touchscreen or gamepad although we preferred the latter. Right off the bat we can say with confidence that a wired-usb Xbox 360 controller and OTG cable are some of the best accessories you can invest in with this device unless you’re lucky enough to have a Steam Controller. Even though big picture mode’s navigation was designed with a controller in mind, the tablets touch interface works pretty well but can be a little wonky at times such as scrolling left and right.

We got to testing right away and found a plethora of attractive newer titles which work well on the device along with some classics. While there are obvious choices as to what would work best will a full Windows tablet we only take a look at ones you won’t be able to find on iOS or Android.

Not only limited to Steam, the inclusion of GoG’s library and available emulation options makes this device a no-brainer for those looking to do some gaming on a tablet without breaking the bank. We were able to pick up the 64gb version and a 64gb micro-sd card giving us a 128gb full Windows 8.1 tablet for about $350. In fact with all the games mentioned above installed along with a full Microsoft Office 2010 suite along with a few other programs, we have yet to fill the internal storage giving us about 80gb of free space with addition of an SD card slot.

Overall the device’s robust selection of playable titles makes it an attractive offer to PC gamers, especially those of us ingrained into Steam’s digital playground. While there are more powerful tablet options like Microsoft’s Surface devices, the the cost of these rivals decent full size gaming rigs which somewhat defeats their purpose in a gaming sense. It’s exciting to see multiple options available to those on a budget and we look forward to what the future holds for mobile PC gaming.

Stay tuned to Thumb Throne as we’ll be taking a close look at our Good Old Games library in our next installment.