MOBAs and I have a tumultuous relationship.

Oftentimes in games, I’m a fan of the highly tactical skill-based aspects, it feels good to have a plan really come together—to have a team that knows their roles and how to execute them properly to completion. The problem with that is that I am often unable to match the levels of detail and precision that many others seem to, often leaving me a frustrating drag on the efficiency of the team as a whole.

This is magnified in MOBAs exponentially: I hear people talking about games like League of Legends or DotA 2 all the time, using technical jargon that rivals the most technical real-world professions. And while in many games I can at least understand what people are getting at or talking about, I am so freaking lost when people talk about this stuff. Don’t know what it is, but I can’t make heads or tails of it. And while I enjoy a game of League against bots or with a few friends every now and then, I find I have little patience for ranked matches.

Enter Dead Island Epidemic. A game that is trying to make a new genre for itself: the ZOMBA (Zombie Online Multiplayer Battle Arena). 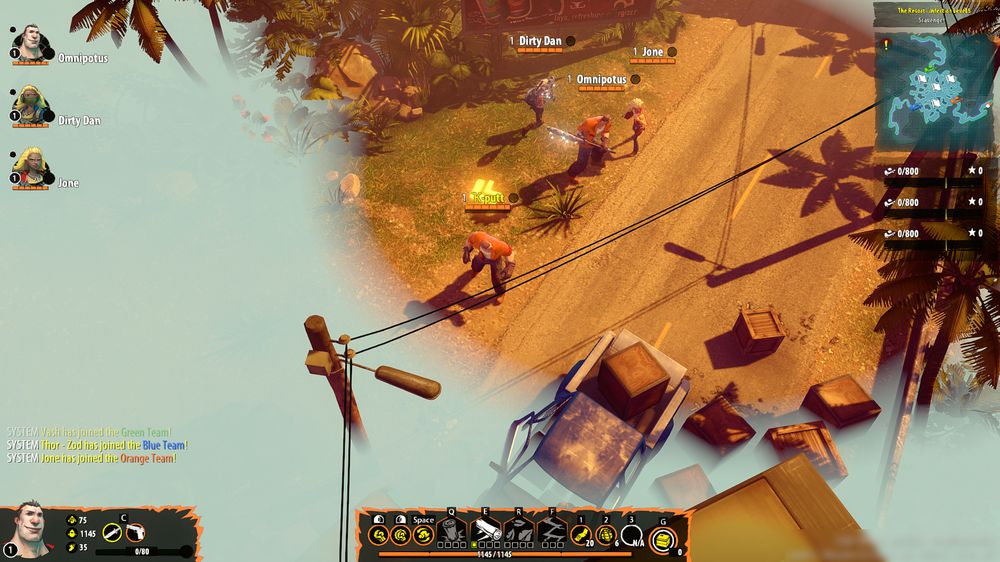 In many functions, Dead Island Epidemic is similar to its contemporaries: you select a hero with various differing qualities and a set of four unique abilities (three standard, one ultimate) and join up with other players to battle other players and/or zombies. Abilities function in a variety of ways and are often skillshot-like in their execution. While the game does have a PvE mode, the lion’s share of your time in Epidemic is bound to be spent in the PvP mode, Scavenger.

The game feels considerably more geared toward a less-intense audience, than other MOBAs, however. That—at least in my case—is a good thing, the game feels notably more accessible than League or DotA 2, both of which have communities that have far outstripped entry-level players, making getting involved without considerable patience and talent a true test of will.

The first of many ways Dead Island Epidemic (DIE) accomplishes this is with its controls. While most MOBAs utilize an RTS-style point-and-click system of movement, DIE characters are controlled with more ubiquitous WASD controls, resulting in a more responsive feel and requiring decidedly less…precision than other games might demand. Rather than manage both a health and a mana pool, all skills in DIE operate on a cooldown system only, resulting in less micromanagement of abilities and overall spamming. You can left-click on enemies for a basic attack that does a small amount of damage in the direction of your cursor and also builds Rage, which you can use at various levels to execute a special attack with a right-click. The attack and its properties change based on the type of weapon you’re using at the time: a heavy weapon is a simple slam that does heavy damage to a single target, with some area damage splashing to nearby enemies, the amount of damage and percentage of AoE increases with Rage, while glove-type weapons have a straight dash ahead that does a lot of damage to any enemies you pass through.

You also have a basic dodge mapped to your space bar—good for avoiding a charging zombie or an incoming skill from an enemy player. The dodge is also on a cooldown to keep players from dodging at every moment of gameplay. The game is nice and accessible, even for someone like me that can’t stay alive in a standard MOBA for more than a few minutes at at a time. 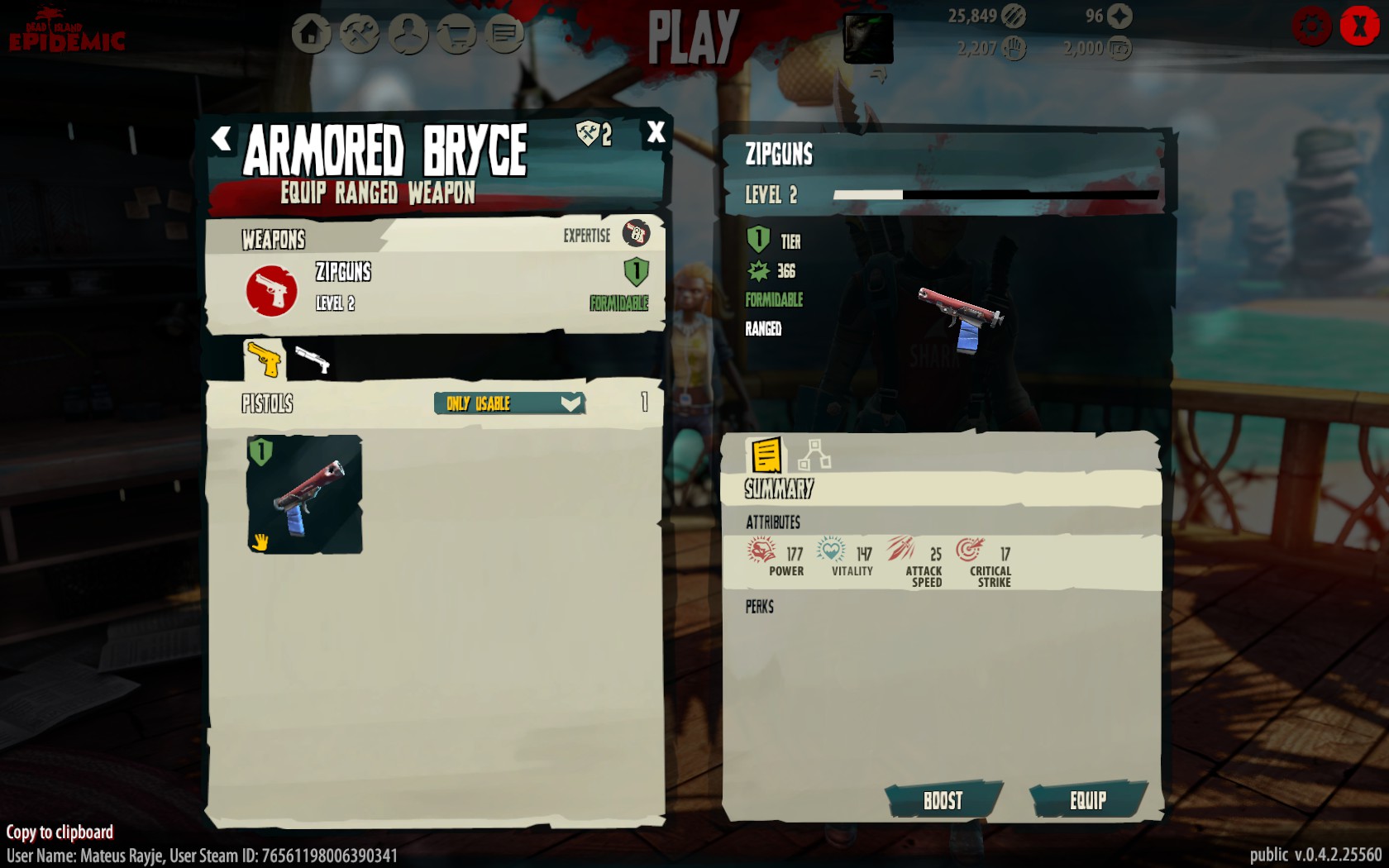 All characters in the game can switch on the fly between melee and ranged weapons, as well. While a particular character might be better suited to efficient use of one weapon type over another, each has pros and cons in terms of engaging particular enemies or keeping damage flowing from a safer distance against hard-hitting enemies.

Rather than include a system for purchasing and upgrading items during matches, characters can be loaded out with weapons and consumables before a match to determine their effectiveness. Some characters have abilities that enhance particular weapon types, but no character is locked out of using any particular kind of weapon. Melee weapons are limited to hard-shitting but slower heavy weapons like paddles and hammers, balanced one-handed weapons like machetes and meat cleavers, or quicker fist weapons like claws. Ranged weapons have a similar trichotomy: fast but weak pistols, mid-range wide-area shotgun, and slow-to-fire high-powered rifles.

The weapons are all indicative of Dead Island‘s usual brand of insanity. Fire axes that are literally on fire, meat cleavers with extra knives attached to the blade, junkyard-built shotguns or lightning pistols, it’s all wonderfully inventive and hilarious. Items are constructed from blueprints acquired either after missions or after being purchased in the shop and parts you gather after successful missions.

In terms of advancement, however, the biggest hurdle with DIE is the amount of time it takes to start feeling like you’re really getting anything. Almost everything in the game can level up—weapons to unlock special perks, individual characters to enhance and unlock better equipment levels and augments, and your account overall to enhance your workbench (to build higher-tier weapons). While a character might advance at a decent pace, they’ll quickly outstrip your account, for example, which prevents you from obtaining and equipping gear that suits their level. This can be surmounted somewhat with the microtransaction model built into the game, allowing you to quickly obtain character points (for buying new characters), gear points for building and constructing new equipment, or unbound XP that can be used to level up weapons or characters. You account can’t be buffed directly, only boosted for temporary bonuses and faster experience gains.

If you don’t want to spend the money, you’ll be spending plenty of time in one of the game’s two mode: Horde and Scavenger. 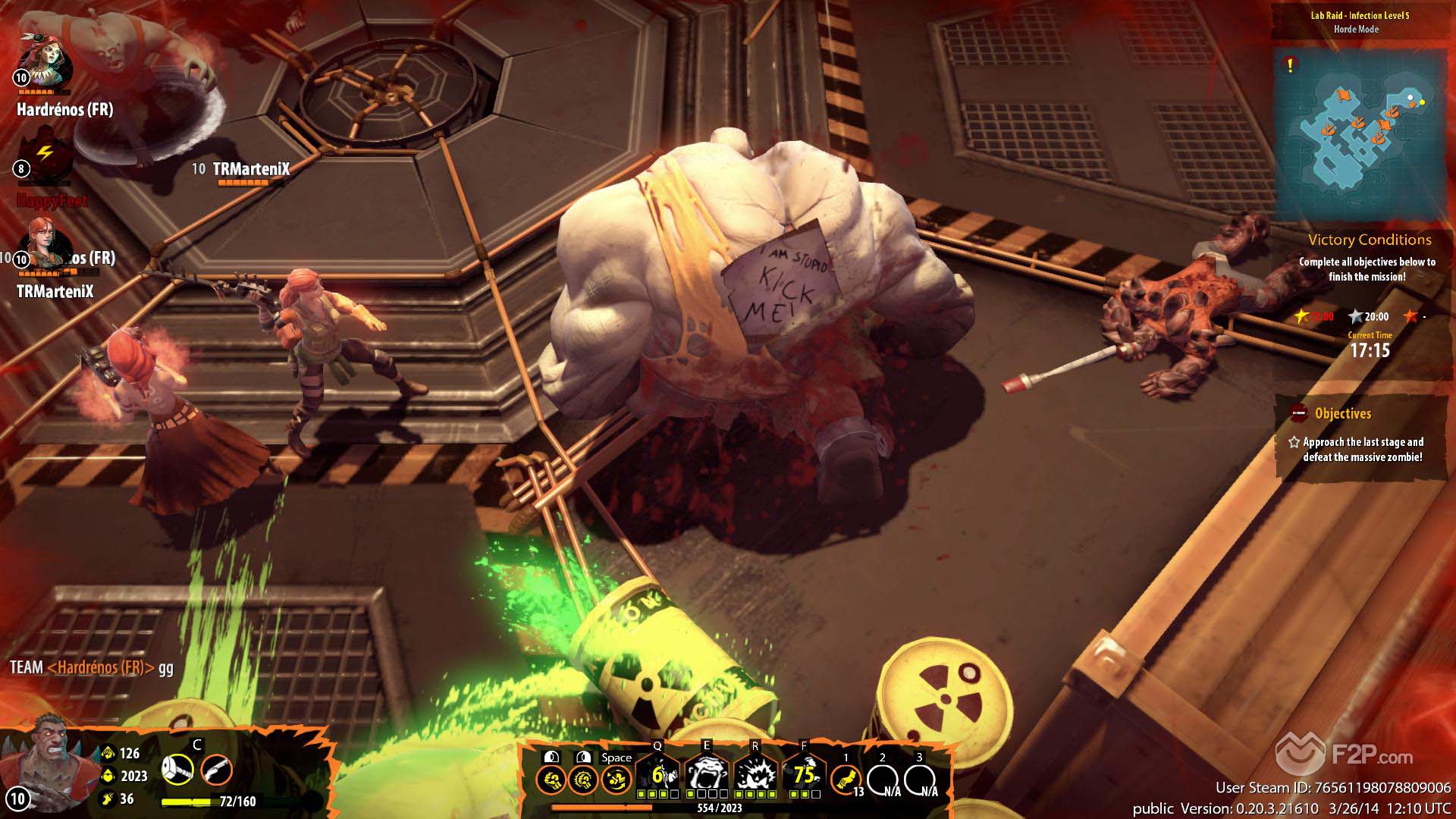 Horde mode is the game’s PvE end. You pick a difficulty (Scout, Horde, or Heroic), match with up to three other players and get dropped into a map with a set path. As you proceed you’ll fight off bunches of zombies of all kinds: basic walkers, charging Rams, Pullers that stun and pull you around the areas, area-of-effect damage floaters, and many others. You’ll capture a series of supply points by fighting away waves of enemies, and at the end fight a large boss monster that requires considerable teamwork and tactical thought.