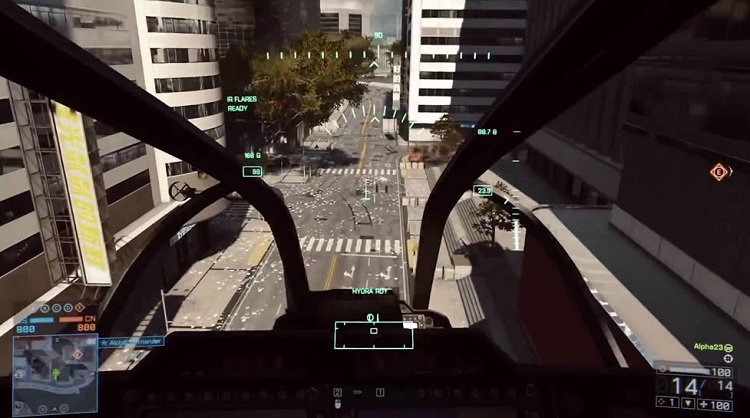 The Call of Duty series cranks out one new title annually, making it one of the most profitable shooters on the market. But with such a shortened time-span, one could argue that Call of Duty games lack a certain attention to detail and often appear as hastily thrown together, specifically in the visuals department. This type of annualized release is something that DICE frowns on, and you’ll never see the veteran developer port its Battlefield franchise on a yearly basis. Even after joining EA, DICE still remained adamant that a “once a year” release plan would hinder the quality of each game. Developers take the Battlefield experience very seriously and normally put a lot of time into each title. Unfortunately, Battlefield 4 may be the first exception to that rule.

Battlefield 4 carries a solid set of next-gen graphics on both the PS4 and Xbox One, showcasing large-scale detailed maps and smooth character models. The holy grails of each Battlefield release are the destructible environments, and they’re much bigger and better in the newest release. Paper thin walls and wooden barricades will shred from gunfire, and concrete walls will crumble when met with explosive firepower. We also see the addition of what DICE calls a “levelution,” an experience that is not only visually appealing, but capable of physically changing a battleground. Buildings can collapse, dams can explode, and one particular level is constantly ravaged by flood waters, eventually turning a shanty town into a nautical paradise. It’s a unique addition, and although it may not alter your gameplay strategy much, it is a lot of fun to watch. 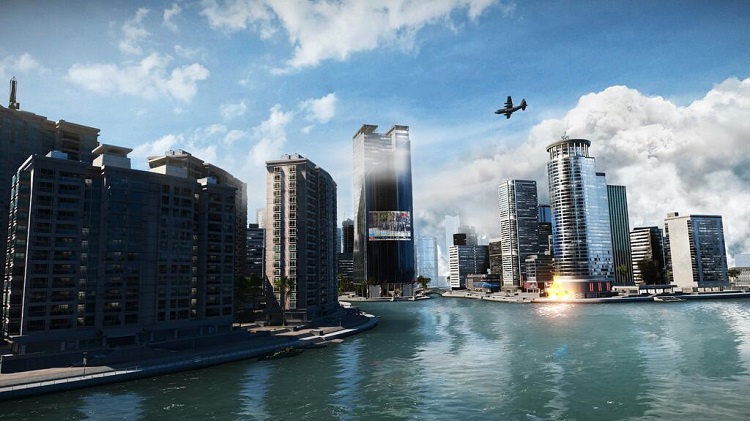 All of the gunfire, explosions, and knife animations are above average, and the game looks better overall when compared to Call of Duty: Ghosts. This comparison should be taken with a grain of salt though, considering that CoD: Ghosts and Battlefield 4 are currently the only two AAA shooters available for next-gen consoles, giving us a severe lack of titles to contrast. But considering that BF4 is a cross-platform release, the visuals are a lot better than one would expect. Although, they are not without fault, and unfortunately there are almost as many negative points when it comes to the graphics as there are positive.

There are an abundance of visual glitches sprinkled throughout the BF4 experience, with most of them coming from the titles multiplayer section. The first person camera may appear jittery in some points and there are even times when you can see a portion of a players body protruding from behind cover or on the other side of a wall. There were many matches we played in which the battlefield turned completely white, textures seemed to be missing, or characters were hovering in mid air or beneath the ground. There is a lack in detail when it comes to destruction of the environment. Buildings come apart in “blocks” and everything seems very cookie cutter. There is also the dilemma of “blending” on some maps. Certain battlegrounds are so bright and white-washed that it can be difficult to see. The color schemes leave a lot to be desired, although we do give points to developers for including a colorblind option in their visual settings to help those of you who may suffer from that condition. 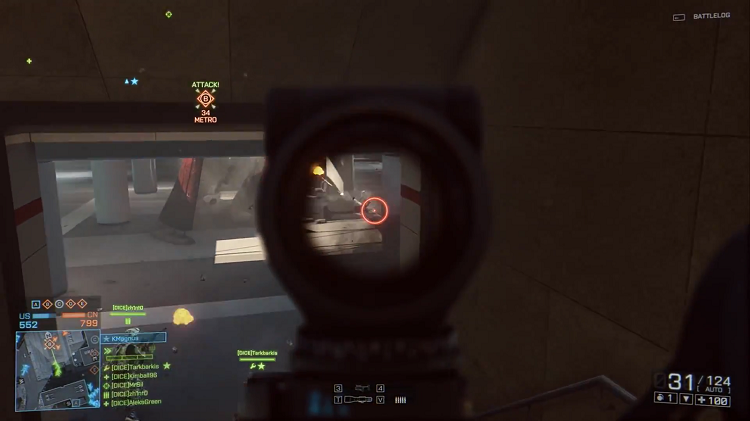 The visual experience is good, and even though the title is cross-platform it still manages to look and feel like a next-gen release. Unfortunately, the slew of graphical glitches and corner cutting takes away considerably from overall visual experience, and the graphics could definitely astound had they only been polished a little more.

Audio is a variable that always made Battlefield such an enjoyable struggle. With most other shooters, its the sound of rapid fire and the boom of an exploding grenade, but the Battlefield experience has always been an epic symphony of sound. Thankfully, Battlefield 4 is no exception in this category. Jets zoom overhead, the sharp sound of helicopter rotors pings from all directions, and there is nothing more unsettling than hearing the roar of rolling tank treads behind you. All of this is laced with the rattling of machine gun fire, the soft tick of a sniper round as it whisks past your ear, and loud rumbling explosions. There are a multitude of detailed sound bytes here, and developers gave attention to the smallest of particulars, including heavy breathing, footsteps, and ringing in the ears. 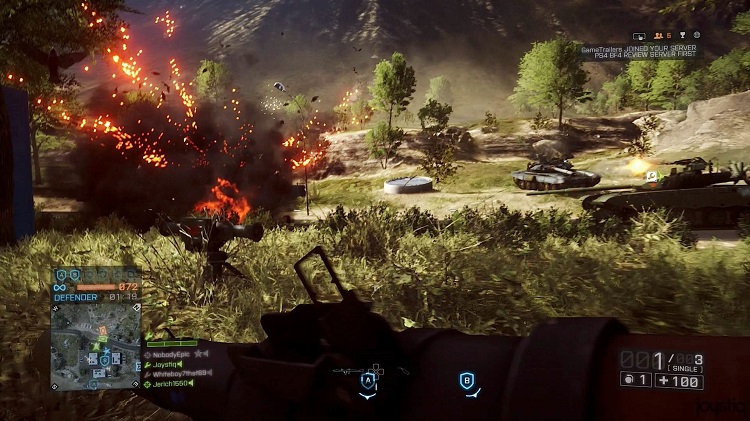 Each match is an audible wonderland, made so much better by a quality set of headphones or an immersive surround-sound system. There are a few quirks and glitches, situations where the sound cuts out momentarily and we were in a match or two where we seemed to be missing certain audio tracks, or some were more amplified than others. But these glitches are normally far and in between, and don’t last long enough to become a serious nuisance. The sound is exquisite and it’s easy to forgive a few minor bumps here and there.

I’d generally include a section that pertains to the storyline for each game, but it’s difficult to dedicate a chunk of this review to BF4’s short campaign. It’s longer than CoD: Ghosts by about an hour and a half. Although, upon completion, you may find yourself questioning why DICE even wasted the time in adding this single-player mode to their finished product. The characters are incredibly cliche, drab, and the story leaves a lot to be desired. It’s hard to become invested in the campaign thanks to buggy friendly and enemy A.I., and the five-ish hour long completion time makes it feel more like an afterthought than a planned addition. It’s safe to say that most gamers flock to Battlefield 4 for the massive Conquest matches, rather than a single player affair.

Gameplay is pretty similar to that of Battlefield 3 and a lot of the features, including classes, have carried over. You’ll spend your time using a variety of guns to unlock new ones and new attachments, and you’ll be rewarded throughout your Battlefield career with new tools and upgrades to give your chosen class an edge against your opponents. The weapons are “new” and there are a variety of customization options for both your gun and character, but at first glance the title remains pretty close to its predecessor. One new addition is the ability to counter knife attacks. By pressing the correct button during a “knife struggle” you can actually counter your enemy and take their dog tags instead. This only works if you’re facing your opponent and they attempt to knife you, if you get knifed from behind or the side you’ll have no option to counter.

There are a variety of game modes to partake in, including a mammoth 64-player conquest mode that pits two teams of 32-players against one another. Conquest is the Battlefield staple, where gamers rush to control five separate points on a map. Air and land vehicles are fair game, creating a massive and hectic battleground. Of course, those of you who prefer a more organized game mode will find comfort in the channels of Team Deathmatch, Rush, Domination, Capture the Flag, and Defuse. You’ll also find small-scale battles in Squad Deathmatch, and Squad Rush. It isn’t all the same-old-same-old though, BF4 brings two new game modes with it. Obliteration pits two teams against one another in a struggle to destroy “high value targets.” Each team has three points to guard and there is only one bomb on the screen at a time. Imagine Obliteration as a mixture between Rush and Capture the Flag. We also see the introduction of Air Superiority, a deathmatch that takes place entirely in the air, allowing those of you with air vehicle skills a chance to shine. 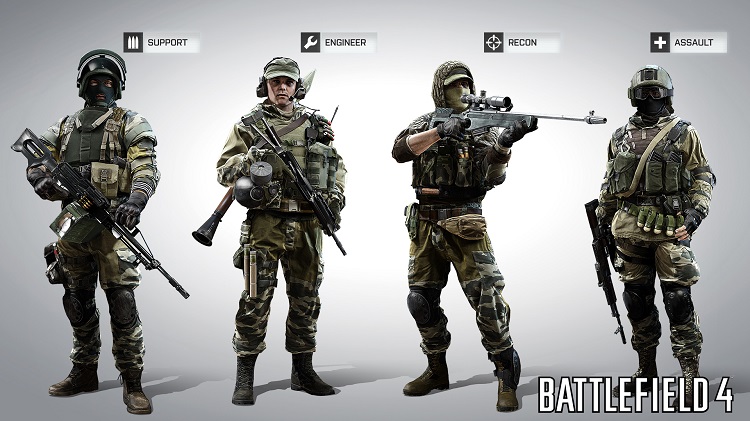 Sadly, the similarities between BF4 and BF3 are vast in one particular (and important) area. Anyone who was unfortunate enough to load up Battlefield 4 on launch day was most likely met with a massive slew of bugs, glitches, and horrific connection issues. The first few weeks for BF4 were dismal, with thousands of players crying foul on the official DICE message boards. The developer, and their publisher EA, joined forces and brought a halt to all future DICE projects, including any applicable BF4 DLC, in order to allocate extra sources to work on the title’s colossal problems. It would take almost two months for the group to iron out a majority of the kinks hindering the BF4 experience, but the game still suffers from a multitude of quirks that can really hinder the gameplay experience. To say that the game launched with problems would be an understatement. Battlefield 4’s woes were on a cataclysmic level, especially when compared to DICE’s track record of producing quality games. This is especially bad news on the heels of the announcement that EA and DICE would not annualize their title to ensure the up-most quality for each release. The gameplay is beyond entertaining when it works, but when you’re booted mid-match, the subject of glitchy kills, or the victim of heavy lag, it becomes a disheartening experience.

Everytime we log into the BF4 servers, things seem to get a little better. It’s obvious that both DICE and EA are working hard to rectify the stigma left by their rushed, and poorly planned release. It may not set well with some gamers, who feel scorned that they pre-ordered a product from a reputable developer that turned out to be “unplayable” for months. But for anyone who felt completely turned off by the title during its early hours, we urge you to give it another shot. It’s much more polished than before, but definitely not without some bugs. Those of you who have yet to join the BF4 universe after reading all the dismal reviews, now is a much better time for you to join the ranks. Unfortunately, this may be as good as BF4 gets, which as it currently stands, is a mere shadow of BF3.