Banished is a city-building strategy game where you are tasked with ensuring the survival of a small group of people.  It’s your job to make sure your citizens do everything from build houses to plant and harvest crops based on season. While it might appear as a normal city builder on the surface, the core gameplay revolves more around survival than cumulative growth. Where Banished really shines is its ability to draw you in and punish your mistakes, while leaving you wanting more.

The game begins with a handful of villagers and a meager pool of resources. It’s up to you to provide shelter, warmth and food to your citizens by commanding them to build structures and gather supplies. Keeping your citizens alive is vital as they are, above all else, the most valuable resource in the game. Each villager must pull his or her own weight in order for the community to thrive by completing tasks ranging from clearing forests to producing clothing for the cold seasons. Apart from the usual resource collection and building of structures, your villager’s duties will constantly need to be shuffled, especially in the early years as tasks needed to survive will usually outweigh the available population.

Micromanagement of your village shouldn’t be a surprise to fans of the genre, but sadly the depth in this category isn’t shared in the games aesthetics. One aspect which can make or break city-builders are the available structures through progression. Banished takes a different direction by giving you access to all buildings from the beginning. Instead, progression comes in the form of obtaining alternate resources like livestock or new seeds for your farms and orchards.  As the years progress you will slowly build up additional villagers as children grow up into adulthood. As your citizens multiply, so must your supplies causing you to focus more on resource balance than city size. This is one city-builder where bigger isn’t always better. 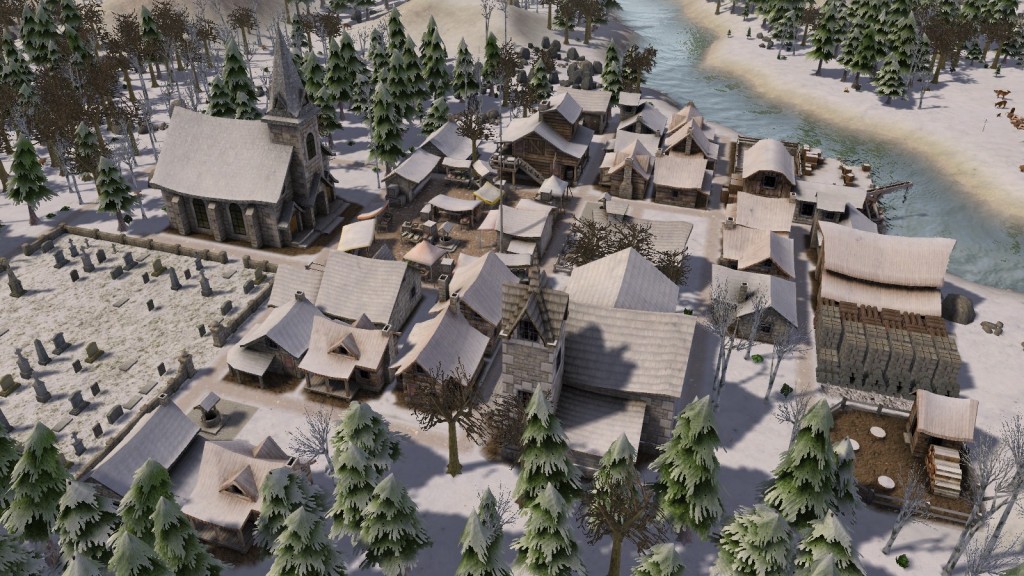 For the first time in a long time we started actually caring about our citizens as more than just another stat. In one playthrough we were a couple years in when a tornado came and killed all our villagers save for one 11-year-old boy. Without anyone to procreate with (barring his ability to create a town hall to acquire some nomads) he was left to live out the rest of his life alone. It’s instances like this which show the beauty of the title. Even though without any real way to “win” here, we’re compelled to try – for poor, poor Kendan’s sake. Even though this game may be unforgiving, it has an almost rogue-like appeal in that when you do fail (and you will) your reaction will be to simply start over again with a kind of “this time I’ll…” gumption.

While some may scoff at a “trial and error” type of progression it’s quite fitting here. There is a brief tutorial which outlines the very basic, but for the most part you learn how to survive alongside your town. It’s this aspect which again strengthens your bond to your citizens and gives you additional motivation to see them thrive. It’s been a long time since we’ve felt this kind of connection to a game.

Regarding objectives in Banished, there aren’t any. The game is a sandbox, pure and simple. There are no goals or objectives other than preventing your villagers from dying. We love the open-ended nature of the title, but can see how a lack of a campaign or clear goals could turn off some gamers.

Overall Banished is much more than the sum of its parts. As a city builder it’s lacking in variety and options, and as a strategy game it barely scratches the surface, but these combined elements form an experience that’s both engaging and unique in its execution. There’s a lot of fun to be had here if you’re willing to set aside some preconceived notions of the genres the title emulates.