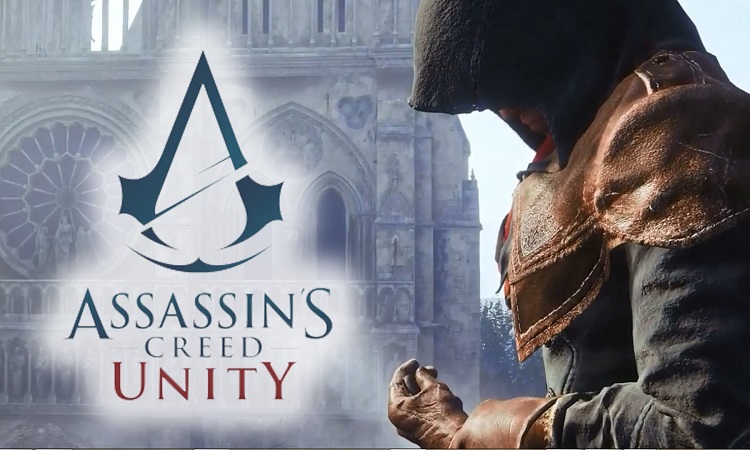 I’ve been an avid Assassin’s Creed fan ever since I picked up Assassin’s Creed 2 on a whim, at my local game store. There is just something incredibly entertaining about the blend of stealth, parkour, and hand-to-hand combat. The AC franchise has had its share of ups and downs over the years, and their can be many arguments made about which release deserves “best of the series.” This becomes even harder when you factor in the changes that Ubisoft keeps making to the Assassin’s Creed formula. Just when you think you’ve seen it all, developers toss a new and interesting gameplay element into the mix. Things like parachuting, calling for assassin aid, naval-based combat, it seems as if each title introduces and includes a new element to the AC universe. Ubisoft’s latest endeavor, Assassin’s Creed Unity, scraps a few of those mechanics in favor of the prospect of cooperative multiplayer. 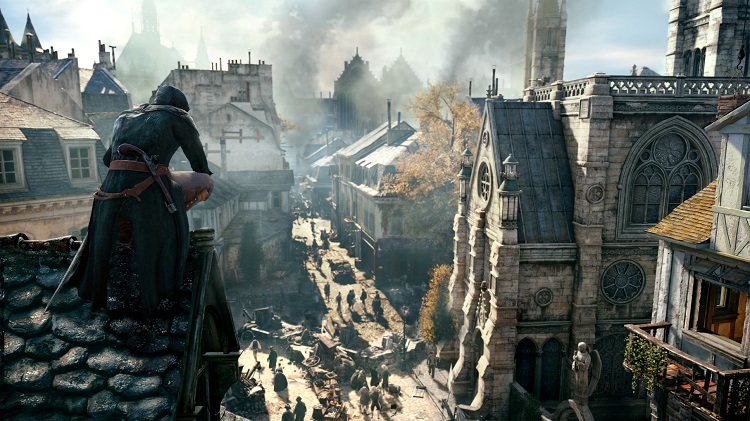 Assassin’s Creed Unity is the first title within the franchise to be created for the newest age, appearing on PC, Xbox One, and PS4. One would think that upgraded hardware would give the studio the necessary firepower to craft an absolutely gorgeous rendition of France during the great revolution. Unfortunately, that was not necessarily the case, and while some aspects of the title appear to be incredibly well crafted and beautiful rendered, there are a vast array of textural and visual issues that plague the game throughout.

Right from the beginning, I noticed a massive slow down when making my way through Versailles. This degradation only seemed to intensify was I was introduced to Paris and the map grew to ten times its original size. The deterioration seemed to stem from the amount of individuals and buildings onscreen at once. The crowds of people and seemingly cosmetic items that dress the Paris streets are so intense that it can’t help but completely bog down the system. There seems to be a lack of graphical optimization and unfortunately it can really hinder the gameplay in spots. I also came across numerous graphical glitches, where characters were missing their entire faces in cutscenes, or limbs and other animated body parts were simply twisted and mangled in unrecognizable form as I tried to scale certain things. 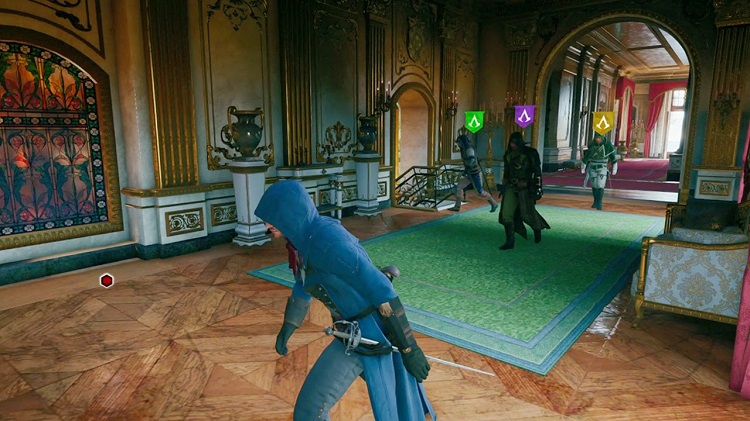 If you can manage to get past the visual issues (and Ubisoft is actively patching them in attempts to fix some of the degradation issues) you’ll be provided with some semi-rewarding gameplay. In this go around, developers opted to to give a better range of motion to the series’ parkour elements. Holding A (or X) will cause your character you lift upwards, and climb to the top of buildings and other objects, while holding B (or O) will cause your Assassin to swing and slide to the ground as quickly and safely as possible. If you’ve played any of the predecessors, you’ll encounter a variety of similar gameplay mechanics, including air assassinations, double take downs, pistols, light weaponry, and heavy weaponry.

Two new additions to the franchise are long weapons (which contain spears), and rifles. You’ll also gain access to the Phantom Blade, a hand-attached launcher that we’ve seen in the past, which can poison enemies, eliminate them, or cause them to go berserk against one another. This time around you’ll control Arno Dorian, a young man framed for a heinous crime he didn’t commit. It’s up to you to clear your name, and bring order to a severely chaotic Paris, during the French Revolution. The story can be intense at times, and has its fair share of interesting moments, although I can’t help feeling that it falls flat when compared to the epic tales of Assassin’s Creed 2 and Assassin’s Creed VI: Black Flag. 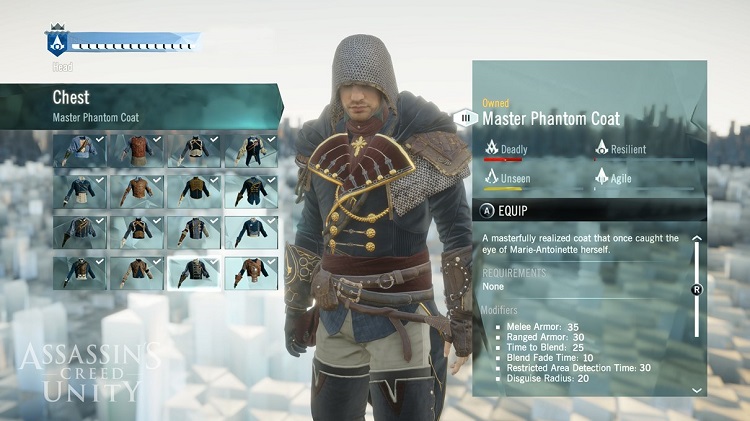 Perhaps the most entertaining part of the title is the cooperative missions. Players are free to drop-in to one another’s games, but note that any single-player missions will disappear when multiple players are connected to one another. Once connected, you’ll be able to take part in a variety of multiplayer missions. You can either perform them as a small unit, privately, or take your skills online and hot join other assassins. Each cooperative mission has its own unique requirements for success, and Ubisoft plans to add even more cooperative content in the future. You’re also able to unlock and purchase a variety of new armors and weapons, each with their own unique stats to adhere to your play style. Unfortunately, some of these armors can only be unlocked by performing specialized tasks through a smartphone companion application, and that can be quite the annoying hassle. Still, when it’s all said and done, the multiplayer is a rather entertaining and innovative experience, hopefully one that will be fine tuned in the future of the franchise.

Assassin’s Creed Unity is a fairly good addition to the series. I would rank it higher than Assassin’s Creed: Brotherhood, but I am a little turned away by the plethora of bugs and visual issues. It was a great step forward for Ubisoft though, and if they can tame down the “item shop” and finely tune their multiplayer, I feel that their next release could be a truly revolutionary title. You might want to rent this game before you buy it, to see if the bugs and lofty gameplay are too much for you to handle.