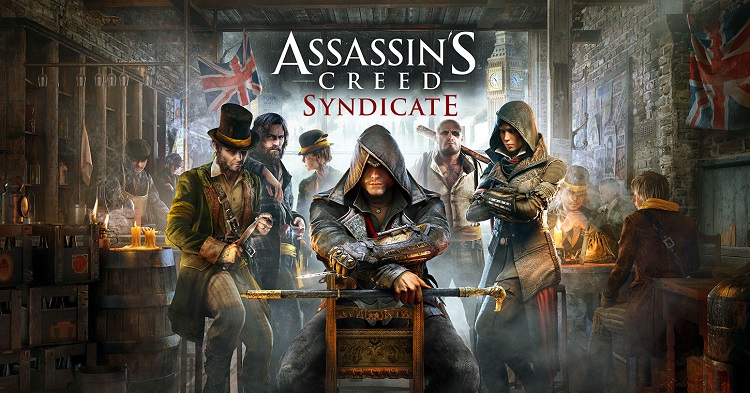 From a graphical standpoint, Assassin’s Creed Syndicate is much improved over its predecessors. There are some occasional hiccups, but the visual errors are no where near as plentiful as they were in Assassin’s Creed Unity. The setting this time around takes place in London, England, during a time of great industrial advancement. Trains and horse drawn carriages dominate transportation, and massive factories sprawl high into the sky. It’s one of the most “futuristic” Assassin’s Creed titles we’ve seen so far in the franchise, and it has a very different look about it. We’re used to seeing gorgeous architectural marvels and beautifully-crafted Italian art. The backdrops for Assassin’s Creed IV Black Flag had us cruising crystalline waters and venturing deep into island paradises. The look and feel of Assassin’s Creed Syndicate is very different. Plumes of black smoke and pollution cloud over the city, crafting a rather dark backdrop. There are still architectural wonders in certain areas of the city, but for the most part you are greeted by a very dreary environment, filled with cramped streets overflowing with industrial supplies. It’s a rather refreshing change of pace, and it introduces us to guild of Assassins that conducted their business long after the time of Altair and Ezio. 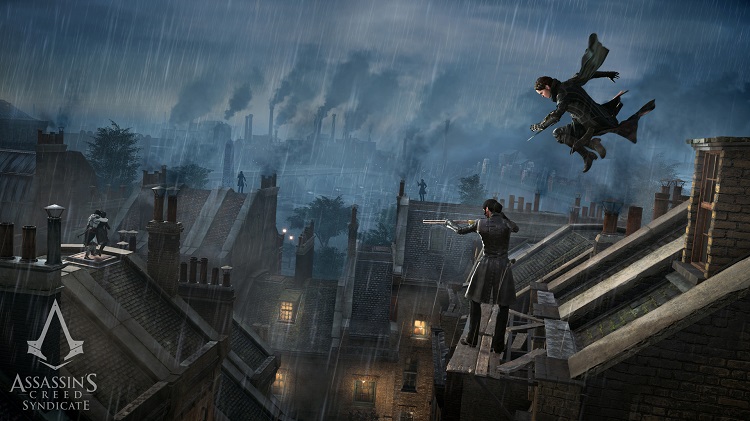 If you aren’t interested in Assassin’s Creed Syndicate for its historical influences, you’re most likely flocking to it for Ubisoft’s trademark brand of assassin-style gameplay. Developers haven’t messed with that formula too much, although they did leave the same style of “up and down” free-running that was seen in Assassin’s Creed Unity. Thankfully, there aren’t as many gameplay bugs to be found, and although I did experience a few climbing-based hiccups and a couple of combat shenanigans, I had a blast with the gameplay this time around. The climbing does feel a little more fluid, and although many of you may not be a fan of the up-and-down system, it seems to work better in this release. Stripped down to its bare roots, gameplay is fairly unchanged, but there are a few new additions that help shake up the monotony. For one, you’ll gain access to a fancy new grappling hook, which will allow you to scale large buildings much faster, and can even allow you to zipline between points. This can help you gain a better view of the battlefield by letting you sneak though the air above your enemies. In true Assassin’s Creed style, you can even leap onto enemies from your zipline and quickly incapacitate them.

You’ll also gain access to a kidnap function, which lets you grab an unaware enemy from behind and coerce them into walking with you. This can allow you to enter restricted areas without question, giving you even more ways to infiltrate enemy strongholds and hideouts. The weapon types have also seen an upgrade in this release. Rather than wielding traditional swords, you’ll be given access to curved kukri, hidden cane swords, and even brass knuckles. Making a return are all the Assassin’s Creed notables that you’ve come to love, like smoke bombs, throwing knives, and pistols.

The Syndicate storyline follows two young twins, Evie and Jacob Frye, as they follow in their father’s footsteps. The pair have their own unique personalities and desires, but share a common goal in toppling the Templar order and restoring freedom to the people of London. This requires them to track down and eliminate a powerful foe named Starrick, while simultaneously locating an ancient piece of Eden. Rather than focusing on one twin’s ability for this release, Ubisoft is giving us access to both. You can switch between Evie and Jacob on the fly, and each character comes with their own unique abilities, strengths, and weaknesses. It’s important to note that there will be times in the game when you are forced to play as particular twin, so it’s a good idea to get used to each play style. You’ll also be able to outfit each twin with certain skills. Skill points are shared between the two, which saves you from having to play both characters equally. I rather enjoyed this approach, and found myself playing as Evie more often than Jacob, due to her focus on stealth and the fact that I find her character’s attitude to be more enjoyable than her brother’s. 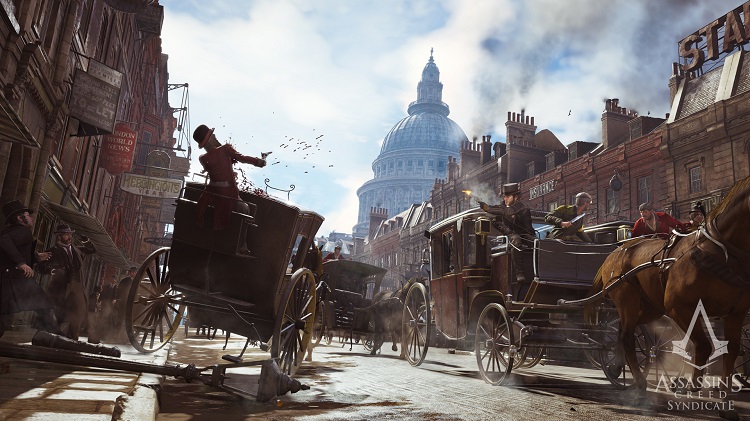 If you’re like me, then you rather enjoy the fantastical historical aspects of the Assassin’s Creed franchise. There are certain locations and events that are historically accurate, but for the most part the history within the Assassin’s Creed universe is entirely fabricated. What makes things more enjoyable is that developers often add key historical figures into the equation and attempt to give them personalities which coincide with their documented disposition. Assassin’s Creed Syndicate features a cavalcade of historical figureheads this time around, including: Charles Dickens, Karl Marx, Florence Nightingale, Duleep Singh, Charles Darwin, Queen Victoria, and Alexander Graham Bell. Each figure is rooted well into the title, with some playing a huge role in the main storyline, while others offer interesting side quests to break things up. The characters themselves seem to add to the gritty nature of industrial London. The entire game feels very different than the normal Assassin’s Creed experience. Even the hideout this time around is unique, and takes place on a large train which moves slowly around the edge of the city.