River City Ransom never obtained the notoriety of Technos’ other battlers like Double Dragon in its time. However, it remains a classic entry of the Kunio-kun series that maintains a cult status of popularity. It’s similar to other brawlers of the time, but incorporates elements and complexities not seen in even modern day titles. While its basic story is predictable – a kidnaped damsel who needs rescuing from the high school bully – it’s brilliance exists with how it pairs elements from multiple genres giving a truly unique experience, even to this day.

Gameplay is your basic brawler but, unlike its counterparts, presents a sandbox environment for exploration. Each area contains one of 9 different gangs, each with their own unique stats and fighting style. While there is a linear path toward the end of the game, players are encouraged to revisit the many areas at their leisure– effectively producing a “grind” like many other RPGs of the era. It’s open world also allows a good bit of emergent gameplay like a pickup game of baseball using rocks and pipes found from fallen enemies.

The way it handles its player progression is still unique even by today’s standards. Rather than gaining experience points through battle, players receive cash from fallen enemies. After accumulating wealth through beating the ever-loving %$#& out of its many random gangs – players purchase tons of different items in towns ranging from food to clothing and books, all of which provide health and stat boosts to the player. Clothing items like boots for example provide huge boosts to kicks. You can sit in a restaurant and enjoy a meal or grab some take-out to re-gen health out in the field.

The combat really sets it apart from other titles of its day. Players can punch, kick, block, jump, dash and use or throw weapons. Books purchased along the way unlock new skills like lightning fast punches or the ability to stomp downed foes. Weapons range from rocks to chains and environmental items like trash cans be thrown or used in hand to hand combat.  All this is accomplished with the use of two buttons and a d-pad.

The game progresses as players fight bosses and gather money to buy items to make their characters better fighters. Combat areas are divided by nine “malls” where items and services can be purchased. Once all the bosses have been fought in order players reach the high school which contains top-tier gangs and brutal bosses. One of which are a nod to the Double Dragon franchise.

You can farm pushovers like The Jocks or The Frat Guys but endgame gangs like The Cowboys and The Internationals will make you stay on your toes. Death means half your wealth so it’s wise to use your cash frivolously. Luckily, all items purchased and stat boosts remain through death. Does this sound familiar? It also boasts one of the most insane save systems we’ve ever seen. In order to continue – players must copy down a 33 digit code of numbers, upper and lowercase letters. 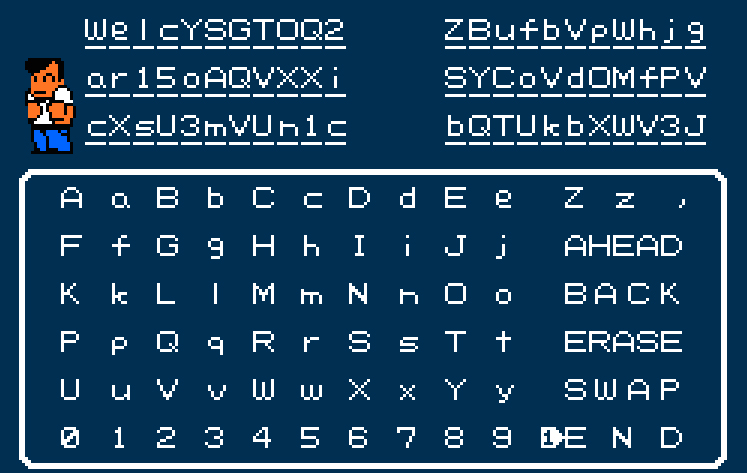 Unsurprisingly, River City Ransom’s cult status among gamers has prompted a Kickstarter by Canadian developers Conatus Creative who are currently working on a licensed sequel entitled River City Ransom: Underground. Its Kickstarter reached its goal and have since stopped their crowdfunding which hopefully means a beta soon. This modern day sequel to the twenty-four year old classic promises to remain true to the original in both gameplay and its art style. Their concept trailer provides us with justifiable excitement for September.

The original River City Ransom is available on Nintendo’s Virtual Console for the 3DS and Wii U at the moment but there is also a remake entitled River City Ransom EX which was released on the Game Boy Advance in 2004.