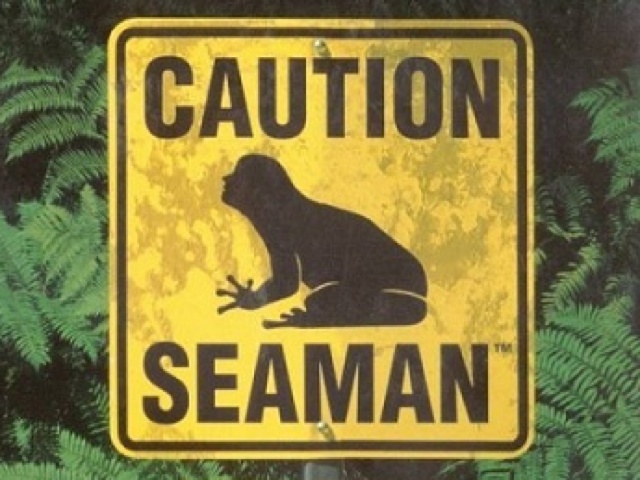 Mouths agape in disbelief. Eyes shifting for a way out. Bouts of uncomfortable laughter. These are common reactions when I recall my memories of the 1999 Sega Dreamcast release, “Seaman.” 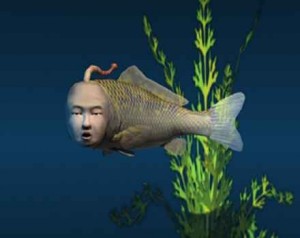 You read that title correctly, and have every right to squirm in your seat, just as the gillman has every right to hate being tickled, but let me assure you, this unfortunately named video game once represented the future – and with its touted voice-recognition technology (a huge novelty, at the time), and narration by Leonard Nimoy himself, why wouldn’t it?!

Designed by Yoot Saito, the virtual pet game offered a long lesson in responsibility, time management and communication, while lending itself to the collective memory as the most bizarre video game to date. Never mind that it required daily check-ins for three weeks, that the artificial intelligence was a tad exaggerated, or that the seaman was prone to political lectures and criticizing American culture – “Do you know what an electoral college is?” A mother cannot help but love their child… even if it’s a man-faced creep fish.

“Greetings! Welcome to the laboratory of Jean Paul Gasse.”

Upon snapping in the Dreamcast microphone and powering on, we were greeted with the earnest voice of Leonard Nimoy. His instructions mirrored the accompanying pamphlet describing an Egyptian mythology of a humanoid fish, and the scientist Dr. Gasse who discovered an evolved specimen of the legendary animal. Citing unpublished theses and questionable hieroglyphics, along with a new title for game developer Saito, or should I say, “Chairman at the Institute for Anthro-Bio Archaeology Japan,” the backstory covered all the bases in case we wanted to imagine how strange Sega executives must have felt in the original pitch meeting.

Time to make the seaman.

The 20-minute endeavor from egg to interactive pet was nothing short of an omen for the three weeks we’d spend repeating the phrase, “Talk to me” into a microphone. By plopping an egg into the aquarium, and turning up the heat, the mystery of life was revealed. The egg exploded into flagellum wielding parasites (ew), we encouraged a Nautilus to eat them, and after going into an inky labor, the squid-like creature erupted into tiny child-faced guppies: the gillman state. They giggled, their vocabulary expanded, and they asked us to name them. Of course, life is nothing if not cruel, so naturally the fish ate each other until only two remained. 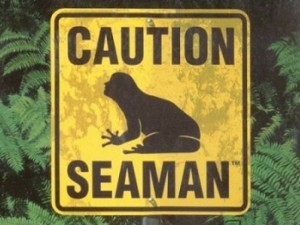 What followed was a hellmouth of daily feedings and oxygen readings. Their voices deepened and their faces started resembling the game developer’s. We’d toil away tickling our fish friends, answering their scary specific questions and raising an eyebrow when they deduced our buying habits and political affiliations. Was this the beginning of data mining? It only takes a day for the seaman to go bottom up. What’s more, every hour they were ignored was reflected in their personalities, with their database of one-liners supplied by the professional jokesters at Jellyvision (“You Don’t Know Jack”). In response to a plea to talk with me, one quipped, “Fine, you’re a pain in the ass, how’s that?” Truth be told, those suckers could be downright mean.

Still, at the time, rearin’ these babes from fish to fully developed frogmen felt as monumental as having real kids get into college, I assumed. And in some way (i.e. in no way), Sega’s sad decision to discontinue the Dreamcast in 2001, due to lack of support for the DVD format and drooping sales, was a bit like having my home foreclosed on. Regardless, I’ll always think fondly of my imaginary family in the Gasse lab.