There’s no way you could argue that the Xbox 360 was the console of choice over in Japan, but with the recent Japanese launch of the Xbox One, numbers have definitely reached a new low, and may be broadcasting another red flag for Microsoft’s flagship device.

According to Famitsu, the console has sold just over 25,000 units in the week it’s been out, and if the pictures that floated around the internet weren’t indication enough that the reception was going to be…tepid, I don’t know what would be. Take this comparison of the Xbox One release to the PlayStation 4 release at a popular Akibahara shop, for instance: 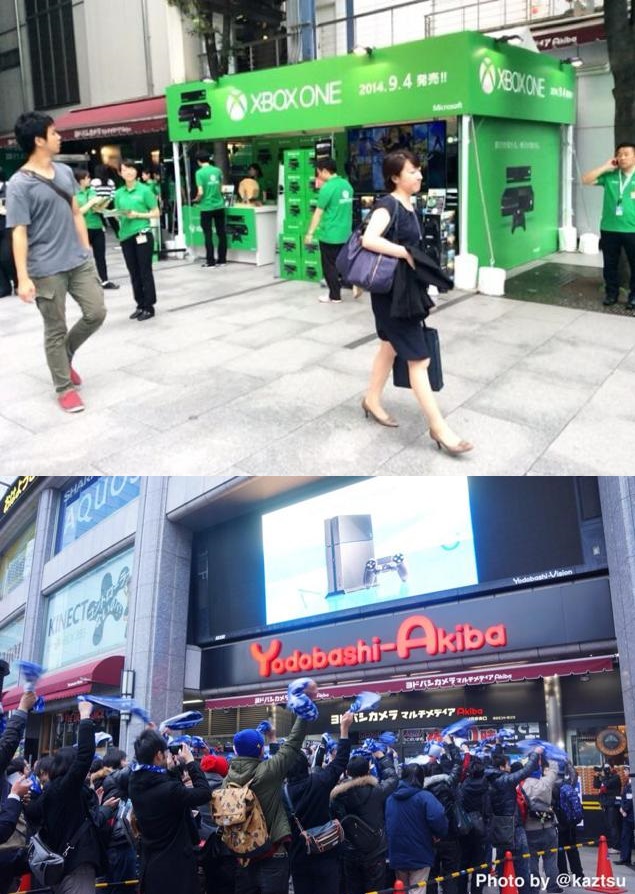 The news gets even worse, too: when compared with the launches of every home console released since 1998, the Xbox One has performed worse than every single one, selling less than half of the next nearest contender—its own predecessor. Those older consoles had sold more than the One even with fewer days on the shelf during their respective launches.

It’s an intriguing microcosmic look at the state of the next generation of consoles, in a variety of ways. The One has been on the losing side of the fight between the major console contenders (Sorry, Wii U) pretty much right from the start.

Recent figures put the spread at about a 2:1 ratio in favor of the Sony system, the most recent announcement from Microsoft that cites a particular number claims that about 5 million units have been sold, compared to Sony’s whopping 10 million.

It’s reached the point where Microsoft, once so eager to post NPD sales figures back when the 360 was outperforming the PS3, has stopping releasing those numbers altogether.

Along with the hyperbolized mirroring of global sales, the lackluster Japanese reception also provides curious insight into the ways that consumers as a whole have been taking gaming lately.

You can check out the figures people have been using here. Now granted, Japan’s economy isn’t in the best shape at the moment, but these numbers are so vastly varied, it’s hard not to reach at least a few conclusions about the state of console gaming in the current age.

Many people questioned whether the new generation was even a necessary launch. Technology has come a long way in the last decade, but the difference in terms of the most noticeable aspect of gaming throughout the generations (graphics and visuals) between the previous and current generations is becoming less and less intense, even as performance rises. The changes are more geared toward social gaming and sharing experiences, otherwise it’s all pretty quiet, under-the-hood stuff that keeps textures from popping in and frame rates high.