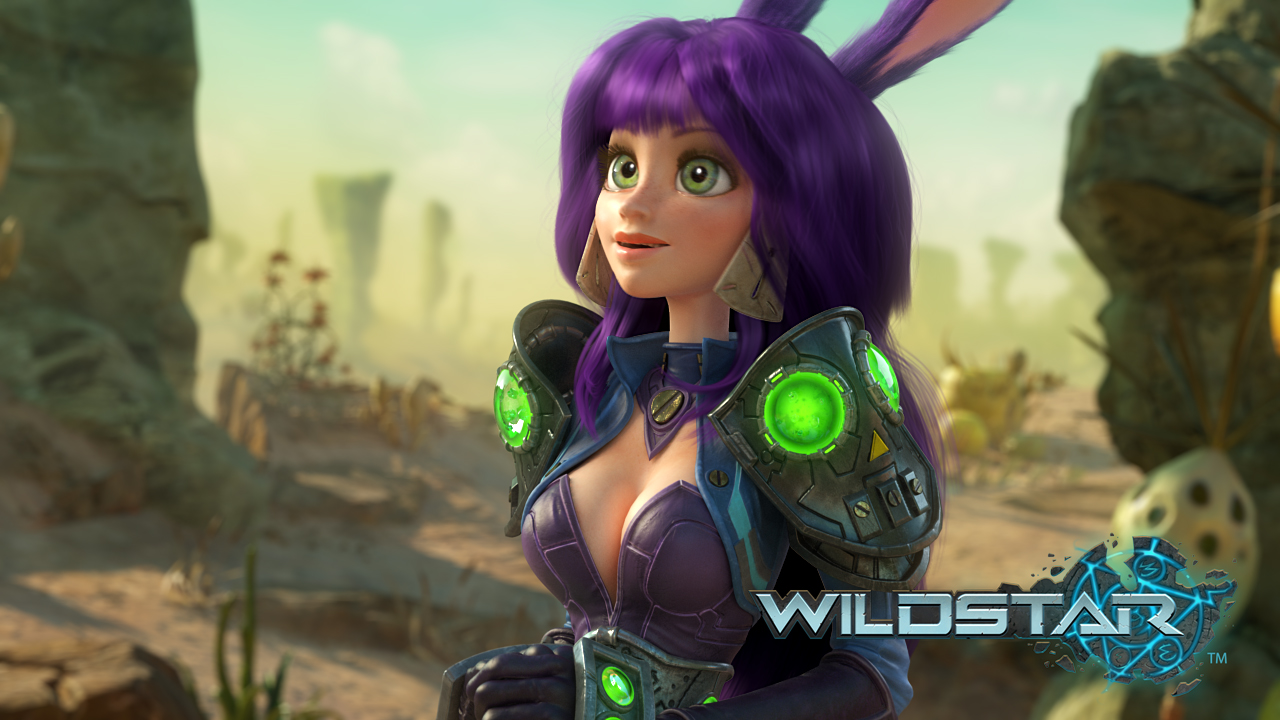 It’s safe to say that the gaming world is in somewhat of an MMO drought. World of Warcraft is arguably losing steam, and has seen a rapid decline in subscribers over the past couple years. Guild Wars 2 seems to be doing alright, but some individuals are growing frustrated with Arena Net’s “living story” and are already clambering for an expansion. There’s always a slew of Free MMO’s, offering a lot of variation, but most of them seem to miss the mark when it comes to supreme entertainment factor. Elder Scrolls Online is quickly approaching, with an upcoming release in March, but it isn’t the only fresh face that’s infiltrating the MMO sector. WildStar may be under the radar for most, but it’s developing quite the cult following and is managing to generate a decent amount of hype. 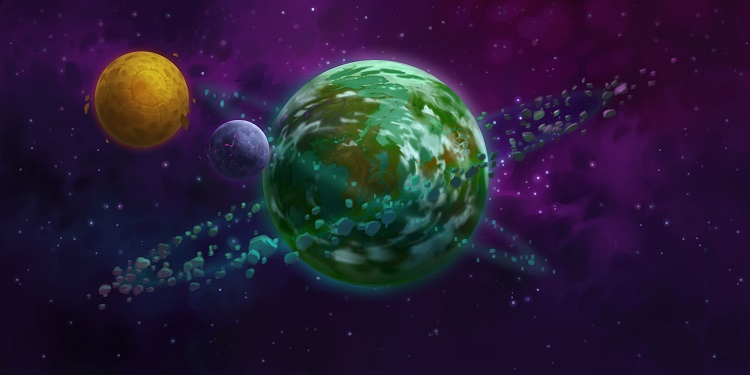 Carbine Studios is heading up production for the anticipated MMO and if their name doesn’t sound too familiar it’s because WildStar is the groups first project. But don’t mistake their recency for a lack of MMO understanding. Carbine Studios was created back in 2005 as a subsidiary of NCSOFT, one of the larger names in massively-multiplayer games. NCSOFT has been publisher (and sometimes developer) to a large number of successful titles including, Guild Wars, Guild Wars 2, Lineage, Lineage 2, Aion, Trickster, and City of Heroes. The team at Carbine is made up of a diverse unit of developers, combining AAA-title talent from games like Fallout, Everquest, Half Life 2, Diablo II, Metroid Prime, and StarCraft.

WildStar is classified as a futuristic MMO, taking place on newly discovered planet called Nexus. The planet was once home to a hyper-advanced race of aliens called The Eldan, whom mysteriously disappeared. The progressive society left behind a multitude of powerful technologies, just waiting to be discovered. Players will choose from six classes across eight separate races, and belong to one of two factions, The Dominion or The Exiles. The Dominion is an intergalactic empire that believes Nexus is rightfully theirs, and plans to harvest it for its hidden technologies. The Exiles are comprised of a group of radicals and outlaws, driven from their respective homes by The Dominion. The Exiles have joined forces in an effort to battle back against The Dominion. This manner of faction versus faction allows players from different coalitions to battle against each other practically anywhere within the game world. Those craving a more structured PvP environment will find a slew of arenas, battlegrounds, and Warplots. Each PvP subsection houses a certain number of players, with arenas containing smaller fights (2v2, 3v3, 5v5), battlegrounds holding medium-sized skirmishes (15v15), and Warplots hosting massive battles (40v40). 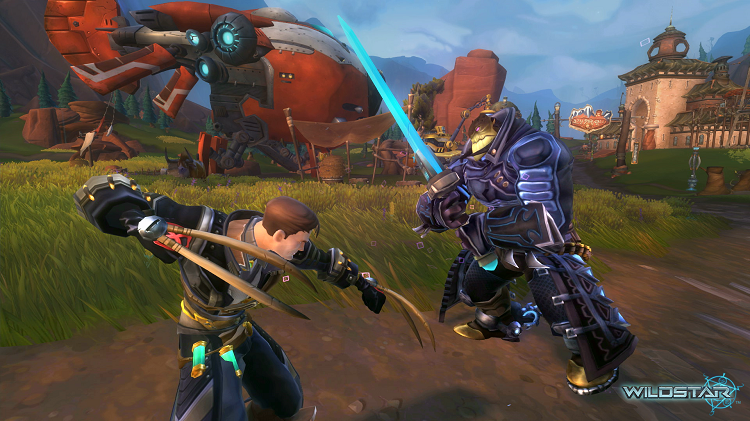 Races and classes are specific to one another, which unfortunately forces you to choose a character you may not want to just to enjoy a certain class type. Each faction is home to four separate races, with Dominion acting as home to Cassian, Chua, Draken, and the Marchari, while The Exiles consist of Aurin, Granok, Humans, and Mordesh. Classes include, Medic, Engineer, Stalker, Spellslinger, Warrior, and Esper. Each class is capable of moving down two of three separate trees for healer, DPS, and tank. There is also room for separate advancements, which will change how each player experiences additional content. Each customized character will also travel down a specific path, choosing between Explorer, Settler, Soldier, and Scientist. There is a mass of character customization to discover between all of these variables, which has WildStar shaping up to be a very personal experience.

It isn’t just characters that are customizable either. Players will be given a chance to secure their own in-game housing, or “sky plot.” Each sky plot has an array of upgradable and useable “plugs” which unlock things like personal dungeons, workbenches, exploration shafts, mines, gathering nodes, and easier access to WildStar’s version of raids. The outside of each sky plot is customizable to a point, allowing players to place different items on hooks and other predetermined places. Inside the sky plot however, Carbine promises that players will have unbridled creative freedom, placing objects wherever they see fit. Housing isn’t a requirement to enjoy the title, but judging by all of the potential unlockables, it could definitely provide a lot of additional resources and entertainment value. 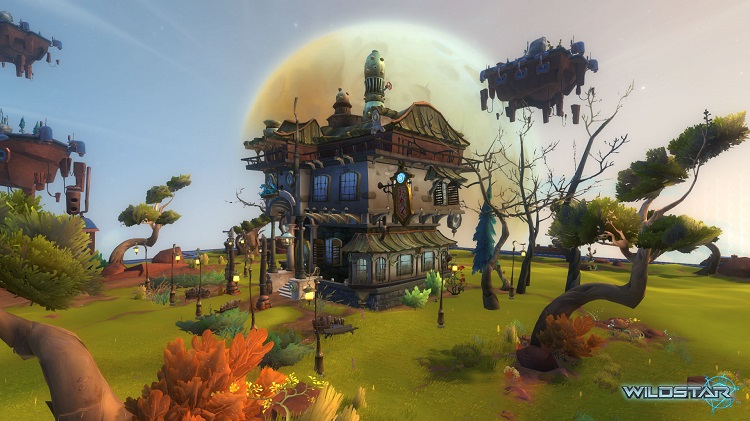 WildStar’s combat system uses a series of specialized telegraphs to predict both player and enemy attacks. These telegraphs show up on the ground, allowing gamers to predict enemy movements and damage attempts. Characters can move freely from within a telegraphs range, or can escape any harm with a well timed jump or dash. Players will also need to focus their spells and attacks in specific areas, intercepting enemy movements for maximum damage. There is still an auto attack feature here, which will position the players telegraph directly under the enemy’s feet, but these types of auto attacks will not generate nearly as much AOE damage to other baddies as a well-place free-targeted attack. 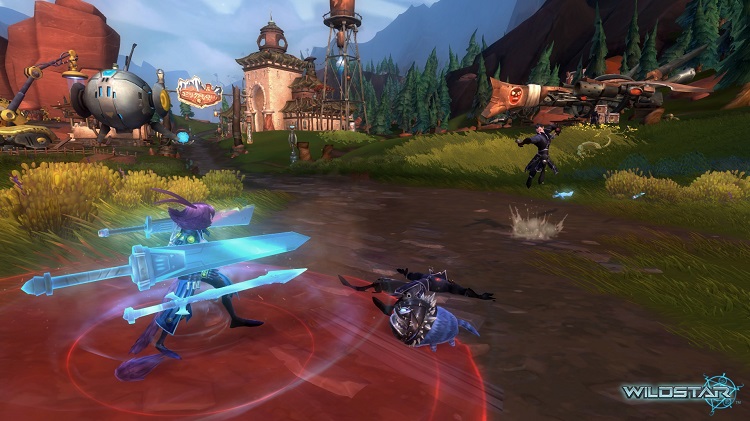 The title will make use of a subscription-based service with a twist. Players will be able to purchase game time directly, in 30 day increments, or can even secure extra play time by trading in-game currency, essentially allowing dedicated players to enjoy the experience for free. WildStar was originally set to release in Q4 of 2013, but Carbine Studios eventually pushed the release back and plan to unveil the game in a retail setting sometime in Q1/Q2 of this year. That places WildStar in a projected release window sometime between January and June. This could provide some solid competition for both Guild Wars 2 and Elder Scrolls Online. If you’re curious to learn more about WildStar be sure to check out the title’s homepage.