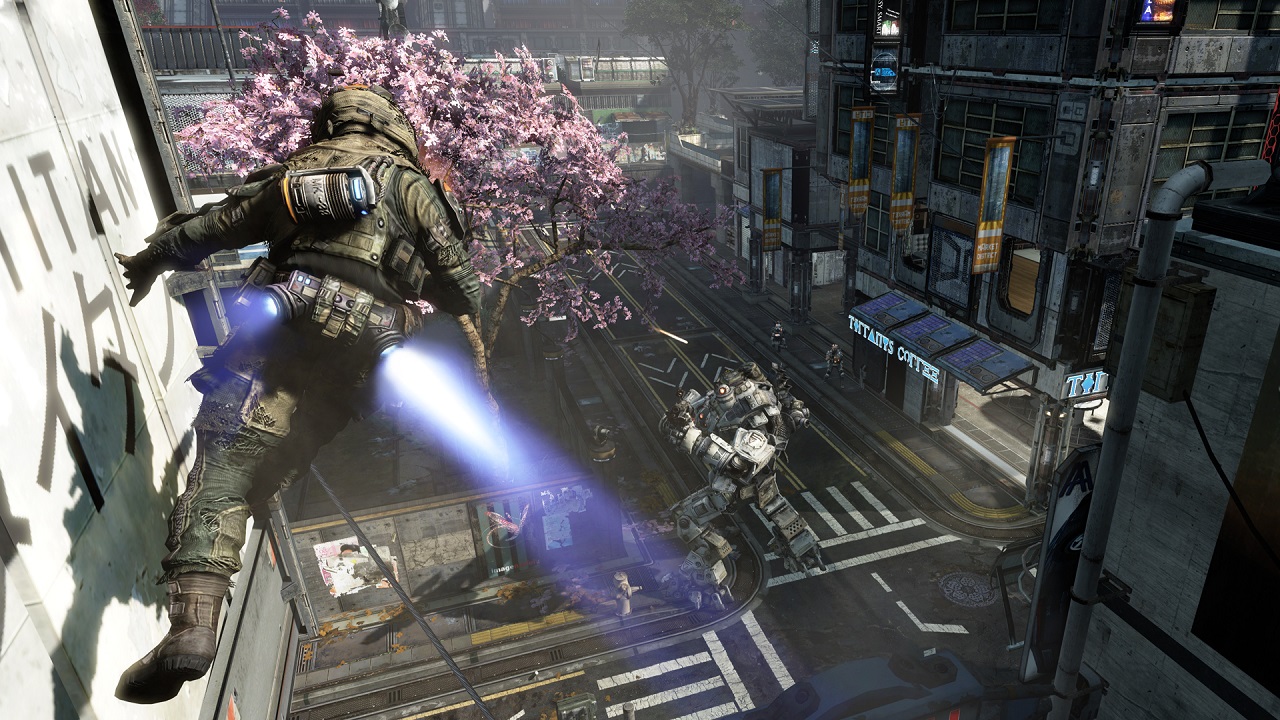 Call of Duty: Modern Ware 2 is one of the most influential first-person shooters released to date. Love it or hate it, it brought a mass of revenue for Activision and its developer. But amidst all the success and broken records was a unfortunate legal matter concerning two Infinity Ward professionals. Game director and president, Jason West, and CEO/Co-founder Vince Zampella, were dismissed from the company on the grounds of “breaches of contract and insubordination.” The individuals were replaced by Activision CTO Steve Pearce and head of production Steve Ackrich.

This major setback failed to derail the duo’s vision of shooter dominance. Shortly after their departure, they formed their own company, Respawn, and began working on an ambitious next-gen FPS. Their creation is dubbed Titanfall, a futuristic title that hopes to reshape the world of shooters by urging forth a refreshing gameplay experience. 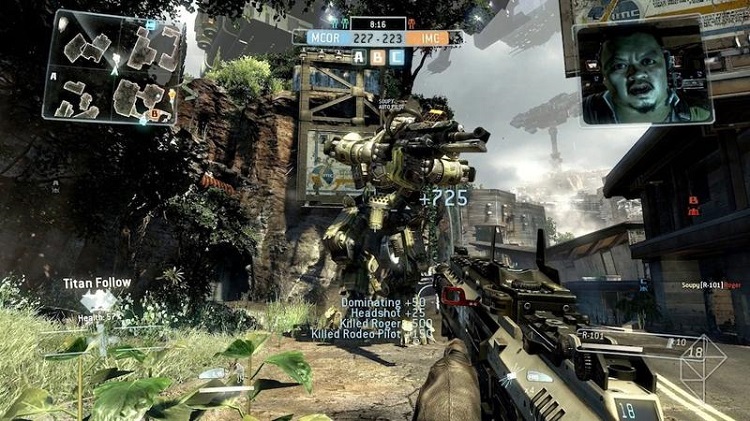 It’s easiest to imagine Titanfall’s parents as Halo and Call of Duty. The game appears to move at the same pace as most of Activision’s newest shooters, but carries a futuristic flair that would fit well into Bungie’s universe. Imagine, a battlefield of technologically enhanced soldiers, aided by massive mechanized suits that can be both piloted and commanded. It’s a very ambitious and creative prospect, meshing together the modern FPS with elements from games like Armored Core, Mechwarrior, and Hawken.

From a graphical standpoint, Titanfall looks up to snuff with other next-gen releases, although we haven’t seen a lot of next-gen games so far to give a solidified comparison. There are moments where the game could look better, and there are some graphical corners cut in terms of textures, most likely in an attempt to create a smooth running experience. Although, judging by the constant action that is going on around you at any given moment, you’d have a hard time stopping to nitpick any visual flaws. 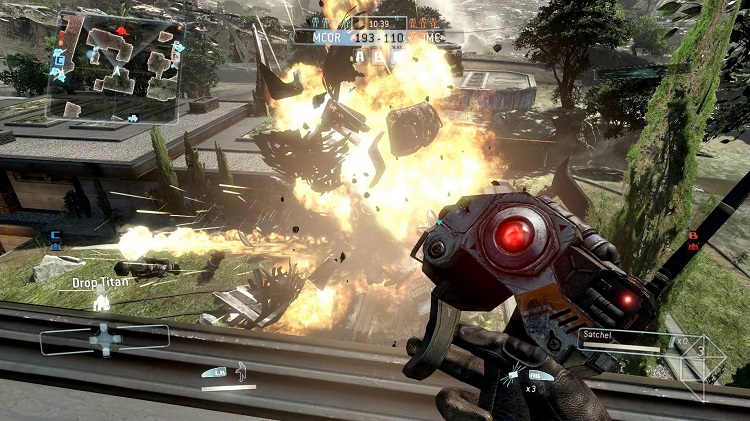 We have already seen a variety of gameplay videos, with many showcasing in-game combat. After engrossing ourselves in a multitude of trailers, one thing is for certain, Titanfall is all action all the time. There are so many explosions to run from, enemies to eliminate, bullets to dodge, and mechs to dismantle, that you’ll pressed to find even a moments peace on the battlefield. It’s a very stressful looking affair, made even more dangerous by the fact that players are capable of leaping, wall-running, and gliding their way across the map. This isn’t your traditional shooter where you can lay prone in one area for a long time, or hide in a tricky spot on the map. With the tools you’re given, you’re able to reach practically any point on the battleground, which means your enemies can too.

Gameplay is very fast paced, mimicing that of Call of Duty and Battlefield. Unlike Halo, it doesn’t take an array of bullets to lay waste to an enemy. A few well placed shots will down your foe, and using the right weapon, a small platoon of foot soldiers can do some solid damage to a mech. It’s unclear what types of skills and perks will be available, if any, but we do know that there will be a variety of weapons. Rocket launchers, assault rifles, long range weapons, and explosives are at your disposal, and some weapons have interesting firing methods and uses. 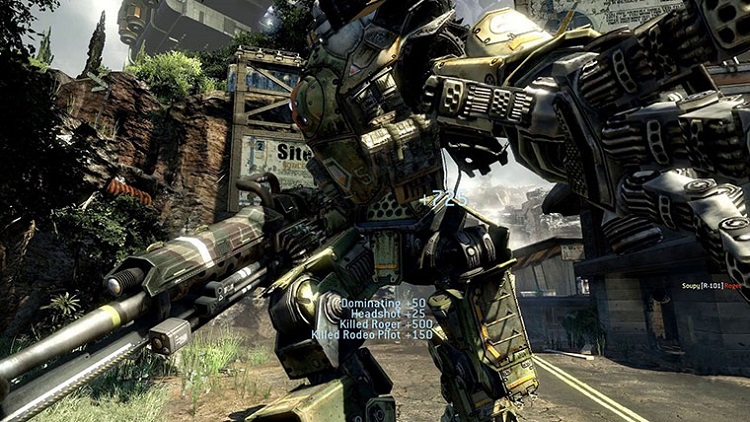 You’ll have access to your very own mech as well, allowing you to call down your Titan from the sky and then hop into it to turn the tide of battle. Mechs are very powerful, and capable of slaughtering foot soldiers if used correctly. You can even battle over mechs, using an array of crazy firepower to damage the metal giants and then engaging in pitched combat to literally pull enemy soldiers from their pilot seats.

Titanfall was announced as a multiplayer experience, drawing some ire from fans who were interested in a singleplayer storyline rather than a purely competitive struggle. The base match will feature 6v6 player action, another potential issue for excited fans. Many took to twitter recently after Vince Zampella revealed the “low” player count, expressing their distaste and complaining that more players is equal to more action. Both Zampella and Titanfall producer Drew McCoy defended the decision, revealing that although the human-player base was low, there would be an abundance of A.I. Present during each match. 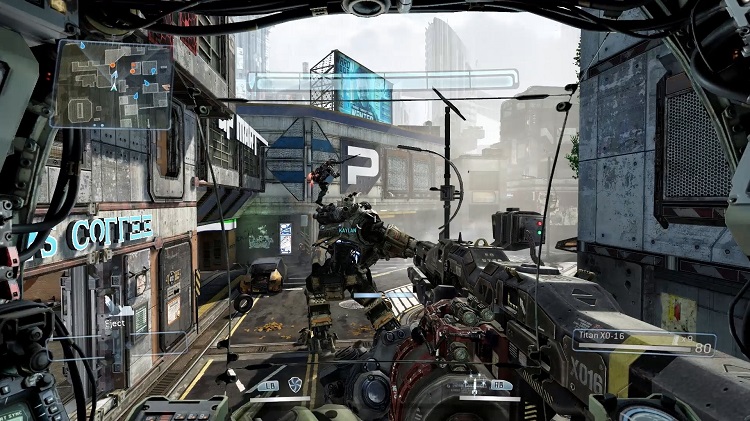 When mechs aren’t being manually controlled, they will go into A.I. Mode, trouncing around the map and laying waste to any and everything in their path. There will also be a slew of A.I. controlled soldiers that will fill space on each team. When all is said and done, there will be a lot more action, and a lot more “people” on-screen than first assumed. The kicker is that enemy A.I. units will award a lower score per kill than human-controlled characters.

Titanfall is slotted to release for Xbox One, Xbox 360, and PC on March 11th, with developers stating that the franchise will never appear on a Playstation platform.