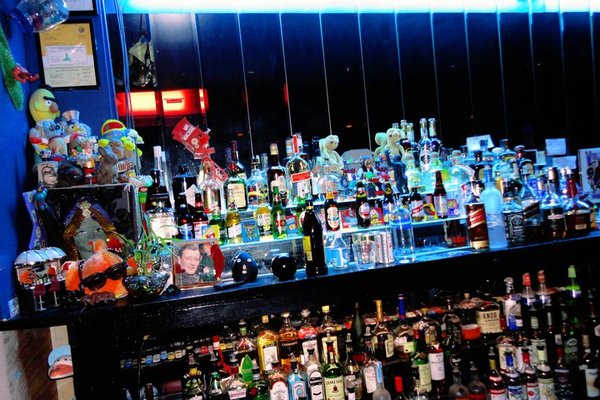 The Rise Of The Barcade

Along Western Avenue in Los Angeles’ Koreatown there is a small bar you might pass by without even noticing. There’s no real storefront to speak of, nothing to alert the passerby of what could possibly be inside- just a heavy dark door, a neon ghost and a large scowling bald man ready to check your i.d. and usher you inside. You’ve just stumbled into the Blipsy Barcade. 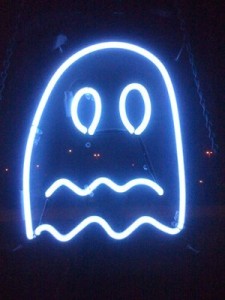 A neon ghost in the window is the only sign that this otherwise ordinary dive is a gamer’s paradise.

Blipsy Barcade is exactly what you imagined “going out” was as a ten-year-old trying to beat the Elite 4 forty times in a row because your neighbor, Chris Kim, told you it would unlock a secret level. Bathed in blacklight, a plastic Godzilla guards a shelf of mid-priced tequila and a neon acrylic-paint Ms. Pacman smiles back at you from the ladies’ restroom. Games are reverently covered in plastic to shield its contents from tipsier players. While the idea of the “theme” restaurant or bar seems a bit tired, the concept of the barcade is more like something we never knew we needed.

The bar itself is packed with retro games- some well known like Pac Man and rarer treats, like the licensed Playboy Pinball machine. What Blipsy Bar lacks in decent ventilation for a room full of ancient arcade games and seating areas, it makes up for in reasonably priced drinks, good company and friendly staff. 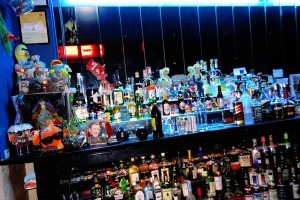 Despite its low profile, Blipsy is consistently packed to gills on the weekends with a healthy mix young Angelenos. But if a cramped trendy dive isn’t really your scene- never fear! It’s hardly the only bar of it’s kind. Los Angeles is also home to EightyTwo, a similar establishment in the Arts District of downtown. And Barcade is also the name of an East Coast chain with bars in Jersey City, Brooklyn and Philadelphia.

As for Blipsy Bar, it’s located at 369 N Western Ave- see you there! I’ll be the one in the Jurassic Park shirt I save only for the fanciest of establishments.