The Long-Awaited ‘Risk Of Rain’ Update Silently Released, Is Awesome

There’s a certain magic to playing a great game and having something big to look forward to.

We’ve been seeing it a lot with Payday 2 lately, what with all the Crimefest releases and the new big breakout, but there was another, smaller game that held quite a large portion of people’s hearts for some time that finally saw its big update come: Risk of Rain.

For the uninitiated, the game is essentially an indie side-scrolling action roguelite. As a crew member aboard the delivery cargo ship UES Contact Light, you find yourself crashed on the surface of a mysterious and dangerous planet—dangerous in so much as literally everything on the planet that’s capable of killing of is trying to do so constantly and with extreme vigor.It’s up to you to use your special set of skills and some of the curious items on board the ship to fight your way back aboard and get off that rock completely.

The game in its base form was pretty fantastic. It married a still-unique retro aesthetic with smooth gameplay that was at once deeply challenging, but simple to get in to. Sure, you had to work your way up from easier difficulties to higher ones (seriously, you’re not going to be able to handle this game on Normal out the gate), but you also had a pretty insane amount of new items to unlock—including some truly devious challenges (Hyper Threader, anyone?) 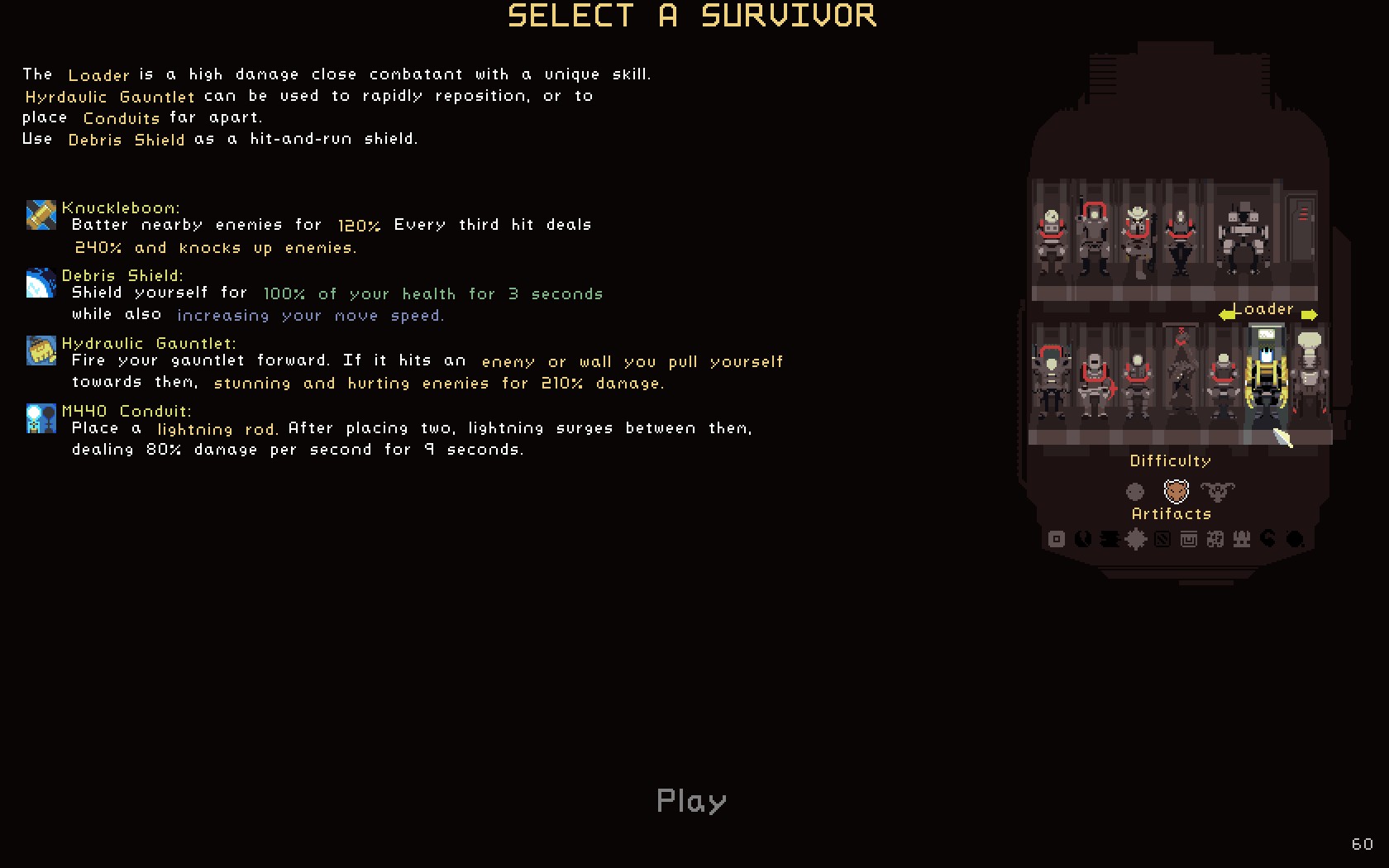 The new update released quietly on October 22nd, adding a considerable amount of content to a game that is, in actuality, not as large as it feels—making this a proper step in the right direction.

Much of the update was technical. The game originally suffered from some severe slowdown issues as runs began to get very long (you can elect to revisit old levels at higher difficulties for more loot, often with visual effects so insane, the game would eventually shut down). The game has a whole new engine to deal with these problems now, providing a smoother experience for players overall, and adding considerably more scaling options to allow for those on lower-key hardware to get their fix.

The new engine also soups up a number of the visual effects of the game, resulting in considerably more clarity in its confusion. It’s much easier to identify harmful effects from various enemies, missile trails are clearer, and sorting out priority targets is just a touch simpler, which takes some of the frustration away from “that’s bullshit” deaths to “I messed that up” scenarios.

What had people more excited for the update hype train, however, was the inclusion of two new characters and a batch of new items.

The total roster now sits at twelve total with the inclusion of the Chef and the Loader. 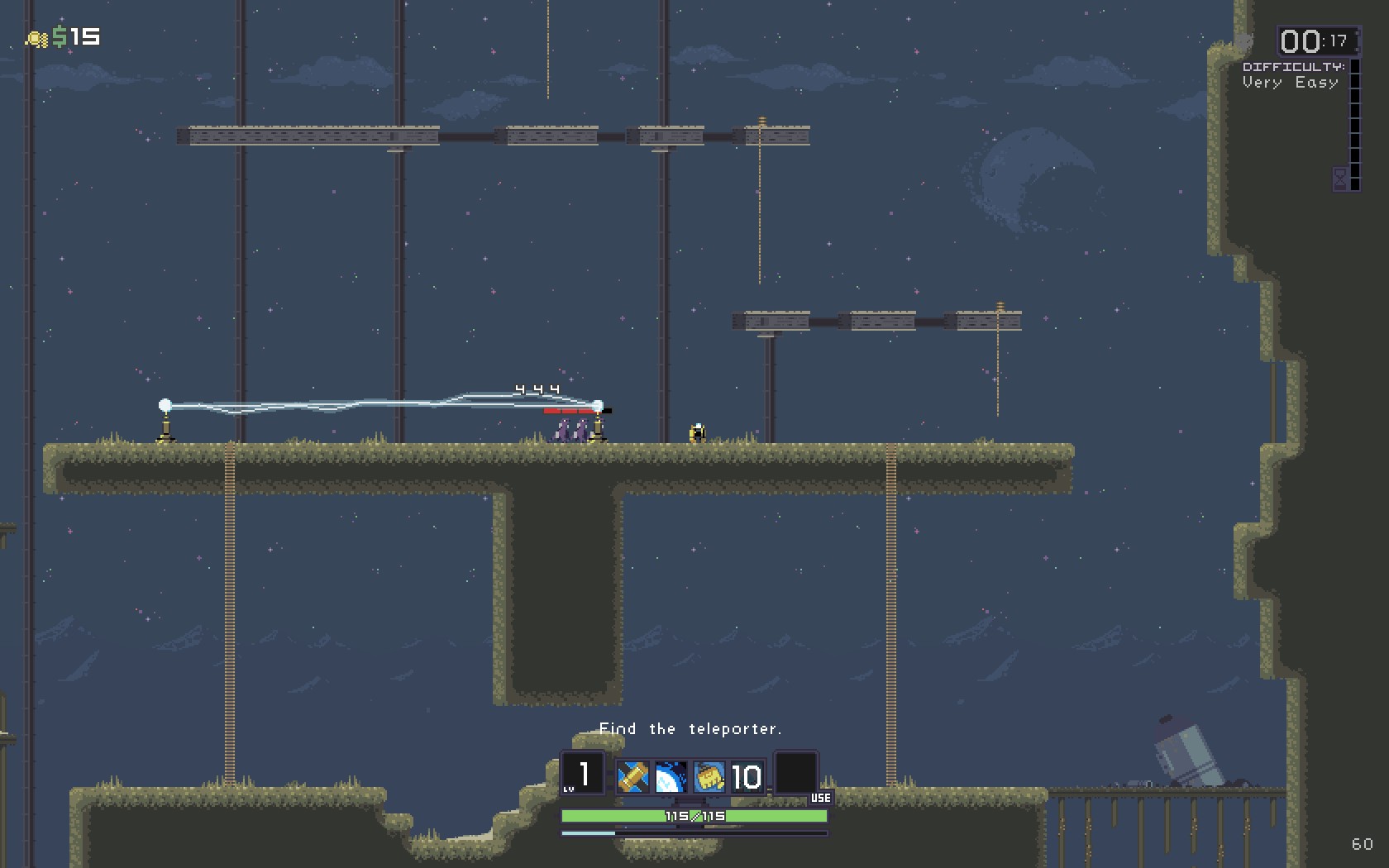 The Loader is an Alien-inspired high-damage melee combatant. It’s main ability is a three-hit combo that also provides a small launch on the third hit. This is well-supported by a quick Debris Shield ability that provides a few seconds of invulnerability and boosts movement speed—useful for quick engagement, retreat, or trying to edge out a kill in a crowded area. The Loader also has a grappling claw ability that allows for immensely rapid approach to enemies or to snag walls for quick traversal and escape. This complements its fourth ability, which drops an electrical conduit on the ground. By dropping a second conduit anywhere, electricity will arc between the two for ten seconds, dealing damage to all enemies within that range. By dropping a conduit, grabbing a wall, and dropping another, you can quickly cause damage across entire screens. It’s a fun character to play, though it looks less dynamic than the other melee characters: the Miner and the Mercenary. 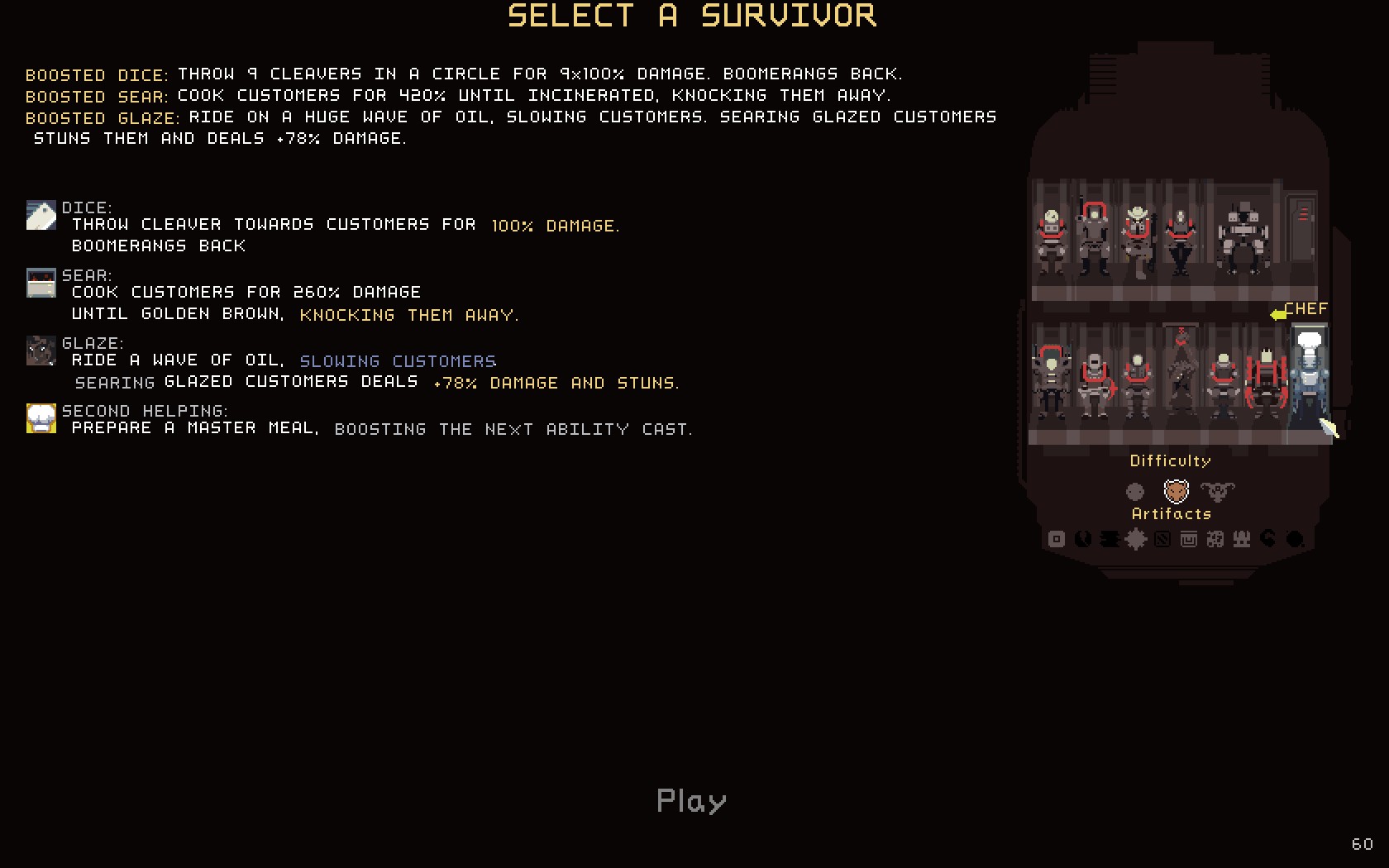 The CHEF, though, is where much of your interest will end up lying. Similar to HAN-D, the Janitor, not only are the CHEF’s abilities hilarious to read (THROW CLEAVER AT CUSTOMERS), but they’re considerably more powerful in a variety of ways than many that we’ve seen. Its basic attack ability flings a sizeable cleaver forward about a half of a screen before boomeranging back; it’s nothing too special until you realize that the ability pierces enemies and isn’t limited to a single cleaver—increasing attack speed and adding some stun to your attacks will result in stunlock on massive numbers of foes simultaneously. The second ability is a quick knockback attack (as the CHEF feels like a Huntress that can’t move while shooting), which can be coupled with a debilitating oil attack that slows enemies for bonus damage. His super ability is a bit more curious than other characters: using it tweaks and enhances his other abilities once, with a very short cooldown. Your basic attack will throw nine cleavers in a circle, for instance, you’ll move further when dumping oil, and deal double damage when spouting flames. I won my first game with the CHEF with very little effort, and he’s pretty simple to unlock, assuming you have the Artifact of Command unlocked already. 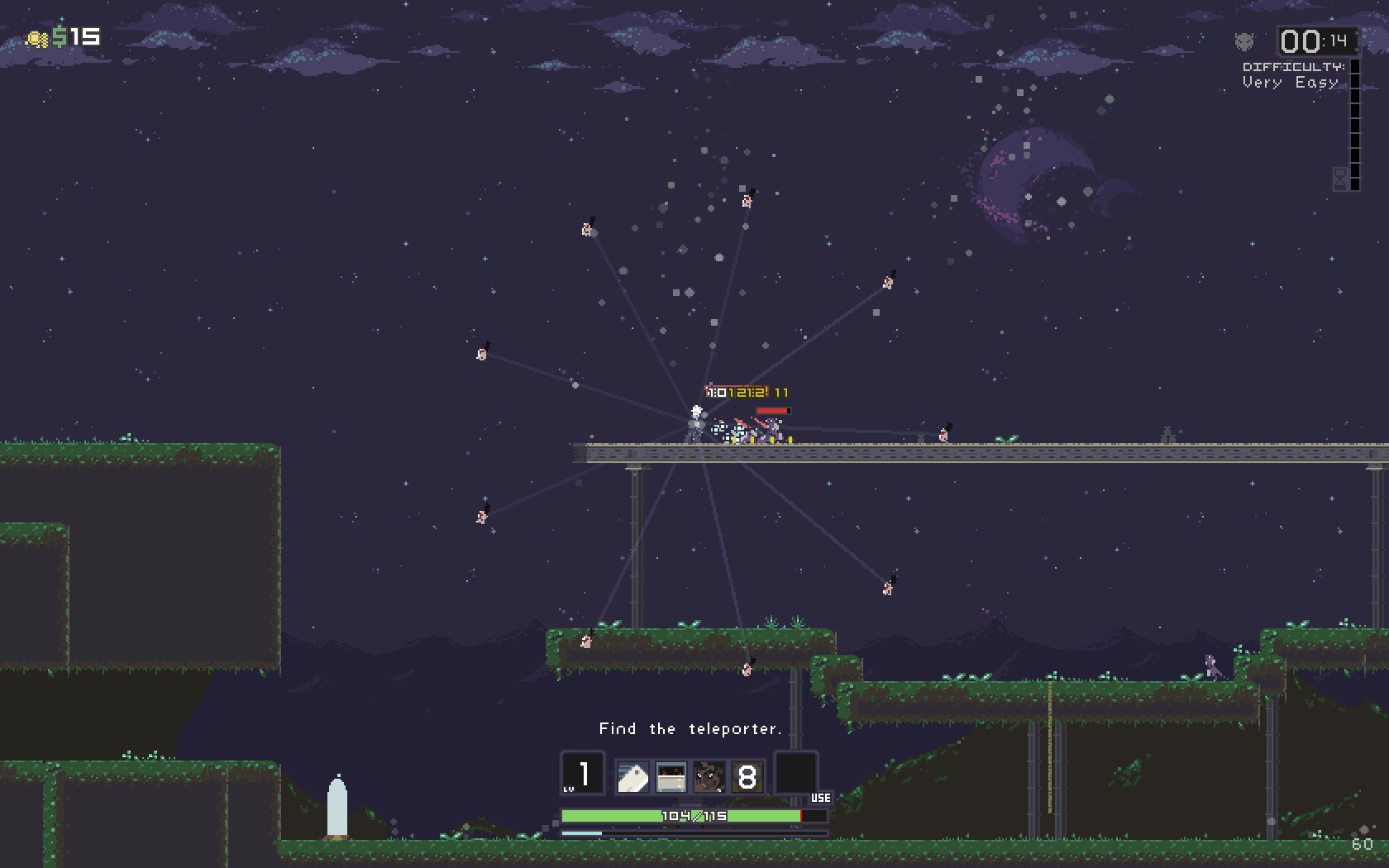 Each new character brought with them the requisite two extra items locked behind in-game achievements, plus we got another six items to go with them. The most immediately noticeable are two mid-rarity items that significantly increase mobility (Hopoo Feather adds and extra jump, Red Whip makes you move really fast out of combat) and make getting around less tedious than before. Bundles of Fireworks release missiles every time you interact with a piece of the environment, while one of my favorite items charges a HUGE laser with every ability use before tearing across the entire level in a ridiculous horizontal death ray.

All this new content isn’t without some qualms, however. There does feel like a pretty significant power differential when using the CHEF versus several of the original characters, and Hopoo feathers render much of the old platforming segments and hard-to-reach Artifacts or areas a moot point in the late-game. Quite a few strange bugs have popped up, as well, including one very common one that prevents your character from jumping from specific heights or platforms—one that is curiously easy to trigger and difficult to make go away. Still, the devs at Hopoo are hard at work hotfixing the update and tweaking some balance issues out, so we’ll see if there are any more significant changes. 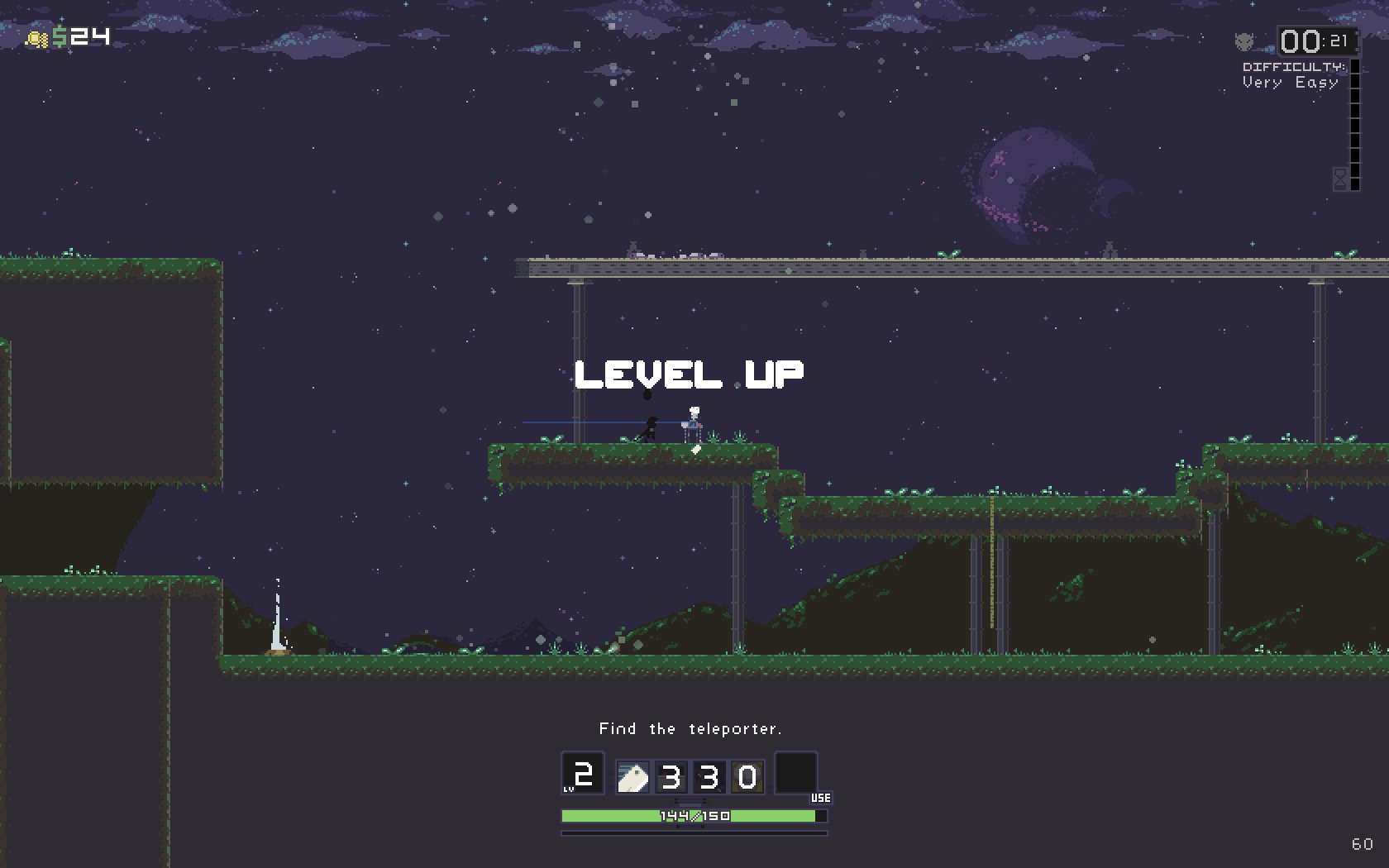 Risk of Rain was already a fantastic choice to own, and it’s only getting better as time goes on. While there aren’t any obvious plans for more updates to the game, it’s still one you should keep your eyes on. Snag it on Steam for a paltry $9.99, or keep an eye out for any Humble Bundles that include it—a common enough experience.