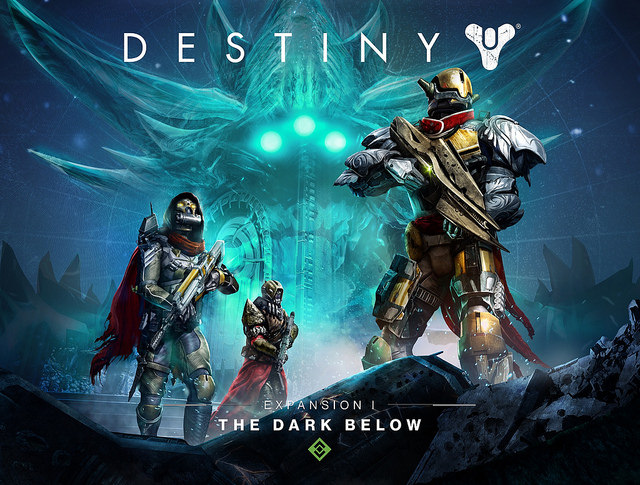 In the face of continued debate as to whether Destiny is a game people should still be playing, Bungie has finally released The Dark Below, the first expansion to their game. And, as usual, the community has once again been divided on how they feel about it.

It’s almost comical the ways in which every aspect of the expansion has divided players on this. Traditional MMO players have bemoaned the amount of content included, which on paper does appear quite small: three story missions, a new strike, and the new raid. FPS players, on the other hand, feel as though this is a pretty decent upgrade, as most FPS expansions consist of perhaps five multiplayer maps at most, and little else at a similar price point.

The truth of the matter is that Destiny is based on repetition, which we’ve covered before, so the amount of content introduced is within acceptable limits, more so when you consider that the content added is easily the best available.

The original story missions wove a misguided narrative that was forgettable at its best and laughable at its worst. Lackluster voice acting and cookie cutter missions with easily exploited level design were the norm, made palatable by strong fundamental mechanics and gorgeous visuals. The new missions are not only better designed overall, but weave a cohesive narrative that includes batches of new mechanics you’ll need to deal with in the higher-end content. 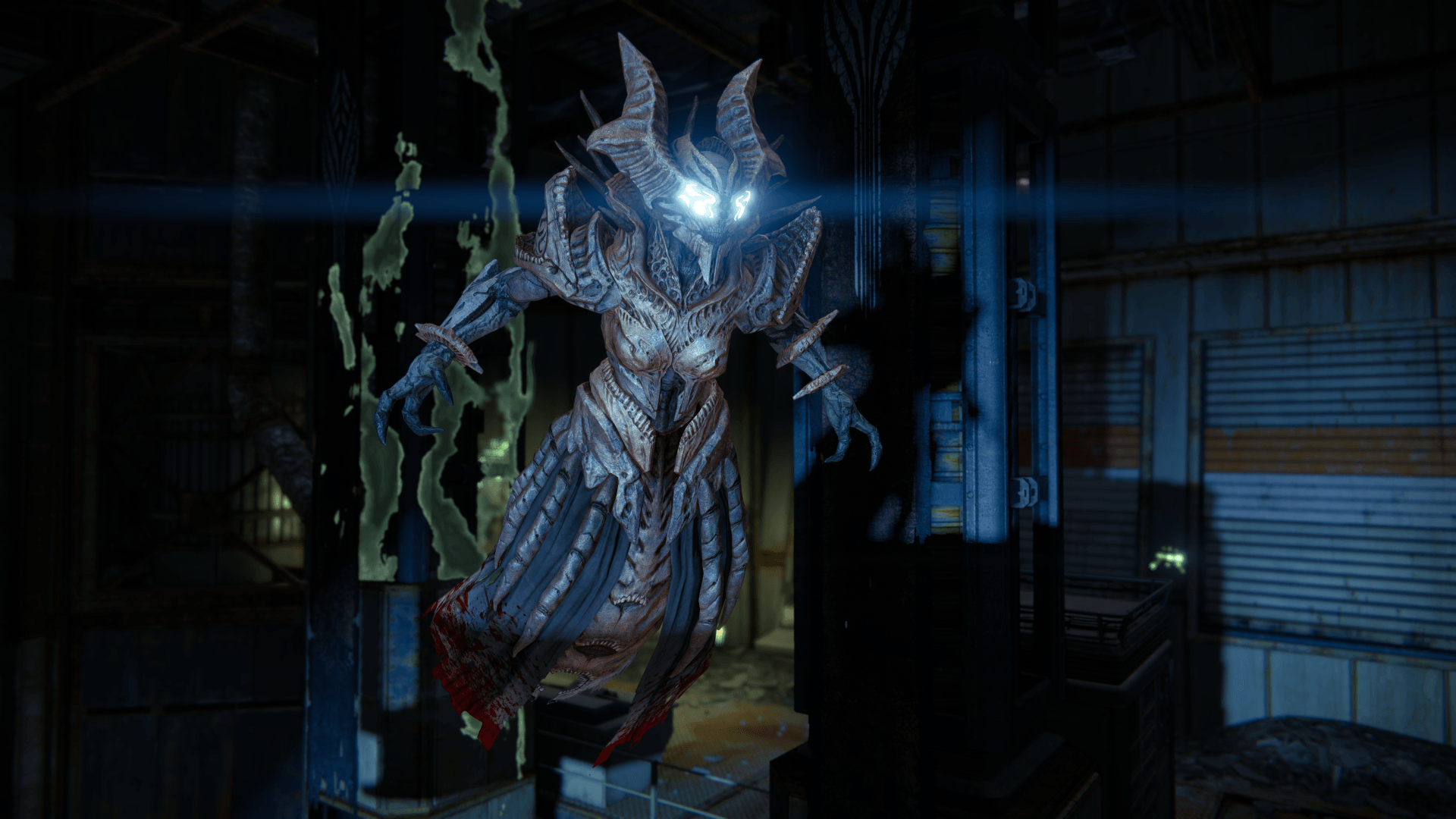 Omnigul is one of the coolest enemies to be introduced in The Dark Below. She’s threatening and storied.

The new narrator/NPC that headlines the content, Eris Morn, is a compelling character that’s significantly better presented than your Ghost. Your goal throughout the content is clear. The first mission opens to a massive conflict between Fallen and Hive enemies, including the impressive Omnigul, who hounds you constantly throughout the story missions, only falling once you finish the included Strike.

Bungie clearly took cues from community discussion and made adjustments to the levels, as well. No longer will you spend so much of your time in exploitable choke points or rushing through combat scenarios: I spent a significant portion of my time legitimately challenged, moving through the space while pursued by hordes of Thralls and pestered by Wizards. There wasn’t a space where I could just hole up and wreck everything, even the boss fight in the Strike was legitimately difficult, moving out into the arena was suicide, but trying to stay in cover limited out damage output, and streams of additional enemies kept everyone on their toes.

This of course is supplemented by the addition of new weapons and gear that can push our Light levels up to 32, and new weapons. Even if some of the execution was…painful, the new gear is welcomed, but there have been a number of other questionable decisions that have driven the community to once again take up their pitchforks and torches and call for boycott of the expansion.

The biggest reason many of the players are so driven to attack comes out of the limitations that have now been placed upon those that have not yet purchased the DLC. 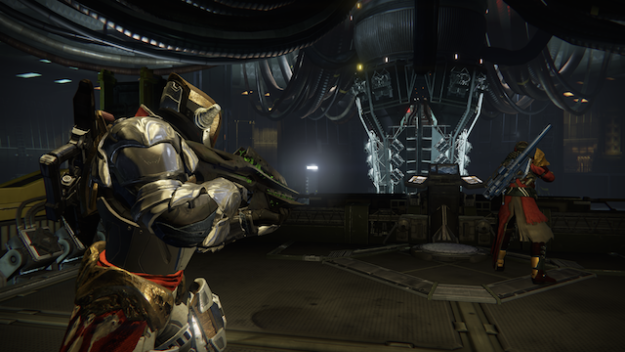 In The Dark Below, the new story missions are not only now more cohesive, but the level design is massively improved.

One of the reasons that people have returned to Destiny time and time again is the weekly content. Tuesday was everyone’s time to run in, do the Nightfall and Weekly Strikes, then try to run the raid. Players that don’t possess The Dark Below found themselves wholly unable to access the weekly content, as its part of the expansion. Certainly it would be silly to relegate this content to base strikes and missions, but the fact that Bungie never thought to have a playlist separate for those that don’t own the expansion is concerning at best, with many claiming that the move is a money-grab of Activision-sized proportions: preying on those that were on the fence by locking them out of some of the most regularly played content.

Even further, the engram bonuses from Strike playlists has been shifted away from the base content into the new Vanguard Roc level 26 list, instead only rewarding blue gear at best. Progression for players sub-level 30 has been stunted, though players still have regular access to Vanguard and Crucible gear (which now pushes you to level 32). But it’s hard to do all the content necessary for reaching that level 30 barrier, as content that was once tiered at level 28 all got pushed to 30, making 25-30 practically grind-exclusive. Add to that that the Vault of Glass raid still drops Exotic weapons that aren’t upgraded and all its gear is limited to the pre-DLC attack levels, while a basic Dreg in a patrol mission could possible drop a legendary engram that decodes into higher-grade gear.

The community is having a difficult time swallowing the limits that have arisen from the implementation of the new expansion. There has been a lot of conjecture thrown around about how this expansion is indicative of the new model for this sort of release by other companies. It’s hard to imagine that Bungie didn’t deliberately cut many of their less hardcore players out of the loop in an attempt to squeeze more sales out of the less dedicated.

I’m not certain that a boycott is the answer to this particular concern. The game’s made its money, and to be honest, the argument would be skewed in the other direction if no DLC content was featured in the weekly rotation and the previous raid dropped gear on par with the new content. The game is evolving, and the base content is going to fall by the wayside, it’s a fact of life.

In the end, $19.99 is a small price to pay for the best story content the game has to offer so far, access to new gear, and a set of new multiplayer maps that are strangely compelling. I remain unconvinced that Bungie’s strategy with their DLC releases will have a lasting effect on the industry so quickly. This reaction is an emotional one that will blow over, given even a little time. Do yourself a favor, if you’ve been ducking the expansion, go for it, but only so long as you’re confident that you’ll keep playing the game regularly.